Objectives: This study aimed to examine the effect of using supportive interview and cognitive behavioral therapy (CBT) for stress management in patients with cancer and understand the psychological issues in this group. In addition, it aimed to study the roles of and issues faced by nurses in the psycho-oncology field.
Methods: The study was conducted between August 2010 and September 2011 at University hospitals in Tokyo. Patients with cancer (n = 20), currently undergoing treatment, were interviewed for approximately 60 min. Interviews were conducted by a certified nurse specialist (CNS) in psychiatric mental health nursing, who employed supportive psychological techniques and CBT cognitive behavioral therapy to examine individual patient’s psychological problems and stresses. Each patient was individually interviewed on three occasions over two months. We measured changes in anxiety, depression, self-efficacy, and current quality of life (QOL) before and after the interviews.
Results: In total 15 patients were evaluated; 5 patients were excluded because of clinical deterioration. The most common issue during the supportive interview was anxiety over treatment and cancer recurrence, reported in 8 patients (66.7%). In addition, concerns over solving problems associated with new medical treatments were frequently reported.
Conclusion: This study suggests that supportive interviews and those using CBT cognitive behavioral therapy conducted by a CNS certified nurse specialist in psychiatric mental health nursing were effective, particularly in improving anxiety, depression, and the QOL quality of life in patients with cancer. In the area of psycho-oncology, cancer-specific psychological needs should be understood and incorporated into nursing practice to improve overall psychological care and to help build nurses’ skills.

The prevalence of psychiatric morbidity, including depression and adjustment disorder, is reported to be approximately 30%-40% in patients with cancer [1,2]. Despite evidence that many patients with cancer experience significant distress, access to effective psychosocial care is limited [3]. The current system is lacking in several regards, there are no systematic approaches to assessment; there is a paucity of psychosocial services; and patients are reluctant to accept treatment either because of perceived stigma or difficulties with access to specialist psycho-oncology services due to isolation or disease burden [3]. Both the high incidence of newly diagnosed psychiatric disorders during the first 3 years of cancer treatment, together with their persistence, should be actively considered when managing patients with cancer, particularly those with risk factors.

In the field of psycho-oncology nursing, there is an urgent need to enhance the systems of nursing education and training for psychological assessment, care, and stress management [4,5]. Currently, nurses tend to rely on supportive interviews for primary psycho physiological intervention. However, Cognitive Behavioral Therapy (CBT) has been gaining attention. CBT was originally developed as psychotherapy for depression. The evidence from brief structured psychotherapy now suggest that CBT is effective in a range of cancer-related conditions, including insomnia in cancer survivors [6], in improving Quality Of Life (QOL) in patients with breast cancer [7,8], and as a general tool for offering psychological support to patients with cancer. However, indications for both supportive interviews and CBT are still being researched.

This study aimed to examine nursing roles and issues in psycho-oncology and examine the effects of intervention on psycho physiological problems in patients with cancer using supportive interview and CBT conducted by a Certified Nurse Specialists (CNS) in psychiatric mental health nursing.

The study was conducted in 20 patients (both outpatients and inpatients) with cancer undergoing cancer treatment at a Chemotherapy and Palliative care department or Endocrine surgery Department from August 2010 to September 2011; patients were individually interviewed on a one-to-one basis for approximately 60 min on three occasions over 2 months. All patients were provided with written explanation of the purpose of the study and only those who consented to participate were interviewed.

Intervention and data Collection was conducted by a nurse, an Associate professor of Cancer Nursing at a Graduate university of nursing as well as a practicing CNS in psychiatric mental health nursing at a University hospital. During the first session, patient information leaflets were used to provide explanation to patients for the following: stress, stress management with psychological education, how to consider issues that cause stress, and the relationship between mental and physical stress. Patients were also shown relaxation techniques, including breathing patterns and imaging methods. At the next session, patients explained regarding issues that were causing stress in them. They were given an explanation of both supportive interview and CBT and were asked to select methods they preferred. Three different psychological questionnaires were given to all subjects at the first and the last interview in order to understand differences before and after the intervention. The first questionnaire was the Hospital Anxiety and Depression Scale (HADS) [9], which measures anxiety and depression in patients with physical disabilities. The second was Functional Assessment of Chronic Illness Therapy-Spiritual Well-Being Subscale (Fasit-SP-12) [10]. This scale consisted of a 12-item questionnaire to measure QOL from a spiritual point of view. The questions contained two primary factors, 8 articles regarding the meaning of life and peace and 4 articles for belief. A higher QOL was indicated with scores ranging from 20 to 25 points on the five-point Likert scale. The third was the General Self-Efficacy Scale (GSES) [11], which included 16 articles; this scale was used to measure self-efficacy.

The study was approved by the Ethics Committee of Tokyo Women’s Medical University in July 2010. A written explanation of the research aims and intended use of the gathered data was provided to the patients. Participation was on a purely voluntary basis, and personal data gathered were protected.

Basic demographic data of patients, including sex, age, mean age, and diagnosis as well as intervention method, were analyzed for each interview group. Content analysis for psychological problems presented by patients in each interview group was conducted. Differences in HADS, FACIT-12, and GSES scores were compared before and after the intervention. Because of the small sample size, no statistical analysis was conducted.

Of the 20 patients, 15 [males, 4; females, 11; mean age, 58.4 years (range, 39-79 years)] were targeted for analysis; 5 patients were excluded because their physical condition deteriorated during the interview period. Nine patients were included from the Chemotherapy and Palliative care department, and 6 patients were from the Endocrine surgery department. Breast cancer was the most common type of cancer (n = 8; 53.3%), followed by lung cancer (n = 2; 13.3%); stomach cancer (n = 2; 13.3%); and rectal, nuclear, and pancreatic cancer (n = 1; 6.7%). Supportive interview and CBT were conducted in 10 and 5 patients, respectively.

All 6 female patients who underwent CBT interviews were females (conducted in all female patients (n = 6; mean age, 53.2 years; range, 34-67 years) from the Chemotherapy and Palliative care department and were diagnosed with advanced cancer.

Examination of the main psychological problems revealed that most patients (n = 5; 50%) were concerned about a current issue, followed by concern about future problems (n = 3; 30%), and concern about the past (n = 2; 20%).

All 6 female patients who underwent CBT interviews were females (mean age, 53.2 years; range, 34-67 years) from the Chemotherapy and Palliative care department and were diagnosed with advanced cancer. 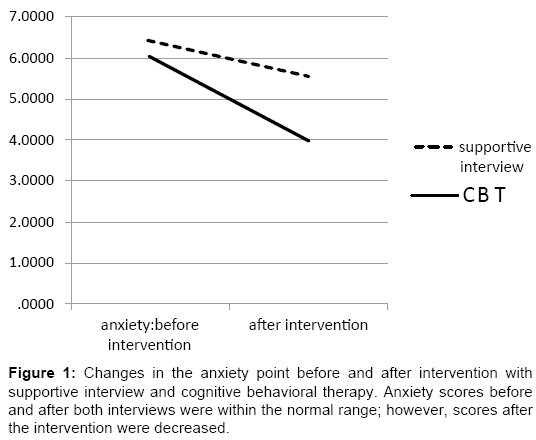 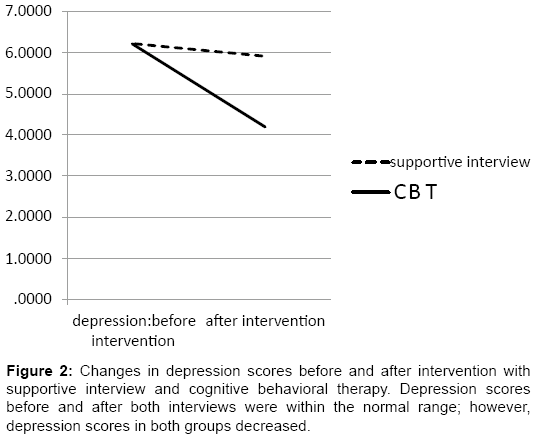 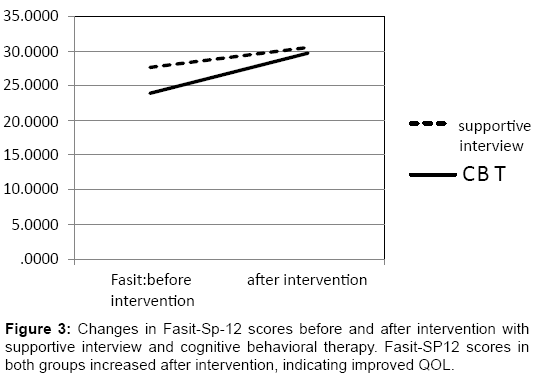 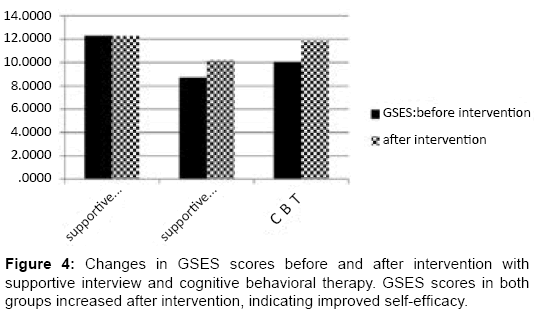 In the supportive interview group, 60% patients who were diagnosed with advanced cancer spoke about the need for physical and emotional support as part of stress management in their medical treatment. It is important to relieve suffering in patients with cancer and maintain their QOL. However, it is not necessary to solve their personal problems. It is more effective to help them organize their feelings through supportive interviews and providing emotional support to manage their illness.

Individuals of many different occupations work within hospitals and may affect the patients. However, considering the effects of a CNS in psychiatric mental health nursing, conducting supportive intervention interviews with the correct assessment and accurate physical information helped relieve anxiety and depression and improve QOL and self-efficacy in patients with cancer.

Despite the short study period of two months, an improvement tendency was seen in both groups through psychological questionnaires. The role of CNS in Psychiatric Mental Health Nursing in the psychooncology field, with the cooperation of other medical staff, is to incorporate cognitive behavioral therapy techniques and understand the psychological characteristics of patients with cancer in order to improve each patient’s mental health.

There is an urgent need to construct a consultation system for early detection and prevention of psychiatric morbidity in patients with cancer so as to allow nurses to perform their nursing roles in the psycho-oncology field.

Because of the small sample size and limited number of sessions, findings of this study may not be generalized to psycho-oncology nursing.

This study could be replicated with a larger sample size using 6 sessions over 4 months rather than 3 sessions over 2 months as a recommendation for future research to obtain more valid pre- and post- intervention scores.

In the future, these techniques should be incorporated into nursing with an understanding of the psychological characteristics of patients with cancer in order to improve and construct a system for psychological care.

Part of this study was presented at an academic meeting entitled “The 32nd Academic Conference of Japan Academy of Nursing Science” in December 2012.

Copyright: © 2013 Kaneko M. This is an open-access article distributed under the terms of the Creative Commons Attribution License, which permits unrestricted use, distribution, and reproduction in any medium, provided the original author and source are credited.