Oral health care is recommended in young children to promote positive outcomes during childhood and later as an adult. Health care providers are often the ones who are first approached by the parents for various problems and therefore they are in an ideal and unique position, to advise families about the prevention of malocclusion. By enriching their knowledge about orofacial growth, health care providers may enhance the implementation and eventual success of oral health preventive programme. This paper describes most common and distinctive symptoms appearing frequently in the early stages of a child’s development that are easily detectable by clinicians. Though malocclusion is of multifactorial origin, some recognized behaviors should be discouraged to allow for ideal craniofacial development and require early referral to the pediatric dentist or orthodontist. Some easily diagnosed disorders include different sucking habits persisting beyond 3 years of age, mouth breathing and significant deviations from established teeth eruption norms.

Oral diseases are highly prevalent in our society, and lead to physical, economic, social and psychological consequences. They impair quality of life in a large number of individuals including function, appearance and interpersonal relationships [1]. Health care providers have frequent contact with families during routine preventive visits in the child’s first few years of life and thus have the opportunity and should have the knowledge to provide parents with good advice regarding issues on oral health in infants and children. In modern society, where there is a great emphasis on personal appearance, prevention of malocclusion and giving the child the best chance of proper and healthy oral development should be important to both parents and health professionals.

Ideal occlusion is defined as a relationship of maxillary and mandibular teeth with all the teeth fitting easily without crowding, spacing or rotation and the teeth should not be twisted or leaning forward/backward. Maxillary teeth should be slightly overlapping the mandibular teeth and the cusp tip of the molars should fit into the grooves of the opposite molars combining minimum stress on the temporomandibular joint, optimal function of the orofacial complex, stability, aesthetics of the dentition, protection and health of the periodontium [2,3]. Malocclusion may be defined as a significant deviation from what is defined as a normal or ideal occlusion. Normal occlusion is representative of around 30% to 40% of the population [4,5]. Slight generalized spacing is considered to be normal in primary dentition (Figure 1). There is some evidence that malocclusion increases within well-defined populations after a transition from rural villages to the city [6]. Facial phenotype is the result of both genetic and environmental factors [7]. Causes of malocclusions are multifactorial but deleterious habits and local factors play an important role in facial and occlusal features. Hence the intervention should be directed at early detection and addressing the environmental factors that cause malocclusion during growth and development [7]. 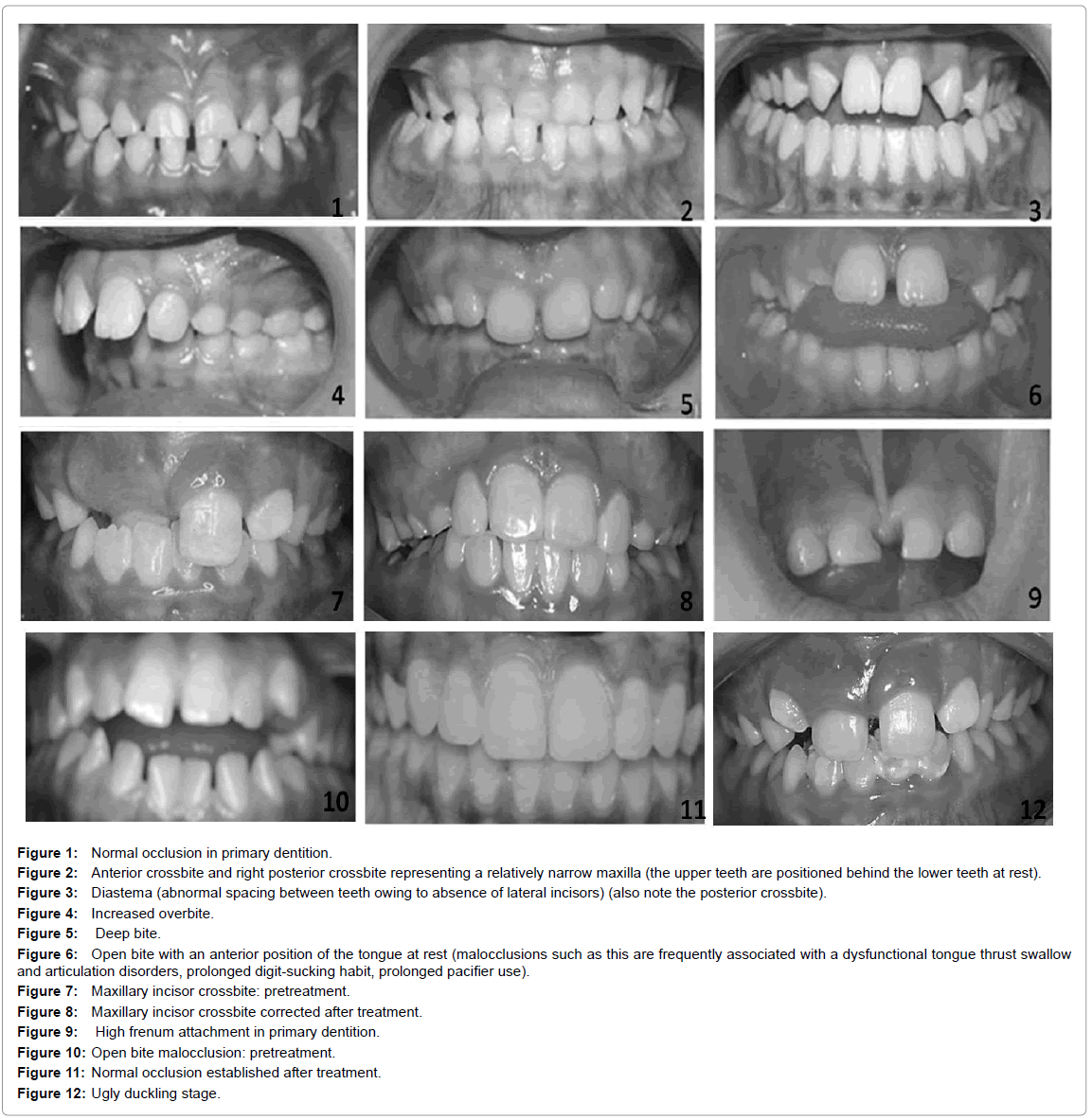 Signs and symptoms of malocclusion

Symptoms which should be considered during occlusal assessment may include the following:

• Abnormal spacing between teeth, most often occurring because teeth are small or missing (Figure 3) or the dental arch is very wide.

• An open bite, occurring when the upper and lower incisors do not touch each other during biting, thereby putting all of the chewing pressure on the back teeth and resulting in inefficient chewing and excessive tooth wear (Figure 3, Figure 6 and Figure 10).

• An excessive overbite in which the upper incisors protrude, often caused by a lip sucking, digit sucking, and tongue thrusting habit or lower jaw that is significantly shorter than the upper jaw (Figure 4).

• A deep bite (vertical overlap more than 2mm between upper and lower teeth), in which the lower incisors bite closely to or into the gingival tissue or palate behind the upper teeth (Figure 5)

• A crossbite, in which a protruding lower jaw (prognathism) that is bigger than the upper jaw causes the upper front or back teeth to bite inside the lower teeth (Figure 2 and Figure 3)

These disorders can be easily diagnosed by the pediatrician and represent conditions in which early intervention might be appropriate to prevent future possible orofacial dysfunction.

Breastfeeding, bottle feeding and sucking habit as a risk of future malocclusion

The importance of breastfeeding in a child’s life is well documented. The World Health Organization recommends that exclusive breastfeeding should be carried out until at least 6 months of age [8]. As the newborn’s mouth is brought into contact with an object, the sucking reflex is elicited. The infant’s oral cavity with its physiological mandibular retrusion, the contact of gingival rims, the highly positioned larynx and long soft palate is perfectly formed for effective sucking to receive adequate nourishment.

In certain conditions when bottle feeding becomes necessary, then it should imitate natural breastfeeding. Attention should be paid to the position of the bottle so it does not rest on the child’s jaw. It should allow free forward jaw movements during sucking. In normal conditions until the first eruption of primary teeth, the jaw should move from physiological mandibular retrusion to its forward position.

It has been observed that children who had been breast-fed for fewer than 6 months had significantly more non-nutritive sucking habits [7]. Which fulfilled physiological needs during infancy but persistence of these habits beyond 3 years of age significantly increased the probability of developing malocclusion at the end of the primary dentition stage [9]. Early weaning, i.e. short breastfeeding duration, seems to be associated with an increased risk of development of a posterior crossbite. Children with prolonged non-nutritive sucking habits, mostly digit or pacifier sucking should be monitored in the primary dentition in order to prevent the development of crossbites, anterior open bite and functional shifts [10]. Other habits such as lip or cheek sucking may also cause local dentoalveolar disturbances. They may cause abnormalities in tooth position, articulation disorder and unusual patterns of swallowing [11]. On the basis of various studies [9-12] the authors suggest that doctors should draw parents’ attention to the fact that if their children do have a finger- or pacifier-sucking habit, it should be stopped by 3 years of age. No one should, however, force the child to stop his/her harmful habit if the child is not yet really convinced to do so. It should be the child’s own decision; if it is not, it could have adverse effects on the child’s psyche. The pediatrician with the parents should instead search for psychological reasons of harmful habits and try to change undesirable behaviors. Sometimes it happens that a child wants to stop the habit but is unable to break it. Under these circumstances, it can be helpful to fabricate a habit breaking appliance, as a ‘reminder’ not to put the finger into the mouth.

In summary, it should be noted that breastfeeding and short pacifier use do not cause disturbance to a child’s occlusion but prolonged pacifier or finger sucking can cause characteristic occlusion defect’s that may remain even after cessation of the habit.

Mouth breathing as a risk factor of malocclusion

Infants are obligate nose breathers. Any obstruction of the upper airways due to structural and morphological defects or upper respiratory tract infection may promote mouth breathing. Mouth breathing can be a risk factor for malocclusion, the severity of which depends on the duration and the inherent direction of growth of the child’s face [9]. Mouth breathing causes the lower jaw and tongue to be lowered and withdrawn. It also leads to tension in the cheeks, hypotonia of orbicularis oris muscle and hyper tonicity of buccinators muscle. This situation leads to the ‘adenoidal facies’ or ‘long-face syndrome’. Removing upper respiratory tract obstructions does not automatically restore the correct breathing patterns as some children are mouth breathers even without any upper airways obstruction and these children should be referred to an orthodontist.

The monitoring of the primary and permanent dentition plays an important role in the prevention of malocclusions [13]. The first tooth to erupt is usually the lower central incisor. By the age of 3 years, all 20 child’s primary teeth should be present in the arches. Continued jaw growth provides space for the larger permanent anterior teeth. At about the age of 6 years, the primary incisors should be spaced, occlude edge to edge and may well show signs of attrition (Figure 1). The mixed dentition (i.e. the transition stage when both primary and permanent teeth are present) begins at approximately 6 years of age with the shedding of the lower primary incisors and the eruption of the first permanent molars. The arrival of larger permanent incisor teeth in child-sized jaws results in some irregularity of the teeth. After the age of 9 years, any incisor crowding is unlikely to resolve spontaneously. All 28 permanent teeth should be present by 13 years of age (excepting the third molars or ‘wisdom teeth’). In the upper arch, the canine is the last tooth to erupt and consequently the one most frequently impacted. Although the incidence of ectopic eruption of the maxillary canine is relatively low, the potential sequelae are significant enough to warrant great care in the screening of patients.

Variation in the normal eruption and exfoliation of teeth is a common finding, but significant deviations from established norms (Table 1) should alert the clinician to investigate further. Failure of a tooth eruption is usually because of insufficient space or the presence of a supernumerary tooth blocking its eruption path. Delayed tooth eruption (Table 2) might be a harbinger of a systemic condition or an indication of altered physiology of the craniofacial complex.

The maxillary midline diastema (space between teeth) is a common aesthetic problem. It can be seen in primary, mixed and early permanent dentitions and can be physiological or pathological. In physiological diastema, also known as ‘ugly duckling’ stage (Figure 12), permanent maxillary incisors erupt with flared and spaced crowns in children aged 7-9 yrs and treatment is not indicated until after the eruption of permanent maxillary canines (11 to 12 years), as the diastema is usually transitory and will close spontaneously. There are multiple causes for pathological spacing, including high frenum attachment [14] (Figure 9), microdontia, macrognathia, presence of unerupted supernumerary teeth, peg or missing lateral incisors (Figure 3), midline cysts and habits such as thumb sucking, mouth breathing, tongue thrusting [15] and teething problems [16] in children which require early referral to an orthodontist when any of these conditions are observed.

Cleft lip and/or palate being a serious developmental problem needs multidisciplinary treatment and follow-up from birth to adulthood. The paediatric dentist and orthodontist will have to take care of the patient until the final oral cavity rehabilitation, when all permanent teeth erupt.

Different dental injuries in primary dentition can lead to abnormal permanent dentition development and be the reason for some later orthodontic complications. It is essential for the parents to know that dental trauma and any sequel should be monitored by a dentist.

Pretreatment (Figure 7 and Figure 10) and post treatment (Figure 8 and Figure 11) photographs of children with anterior crossbite and anterior open bite are presented. As a result of timely referral these patients were treated with a simple removable appliance instead of fixed orthodontics. So the benefits of early diagnosis and intervention are:

• Though malocclusion is multifactorial in origin early diagnosis helps prevent its severity.

• Early referral to a paediatric dentist or orthodontist is indicated (if any of this condition is observed) (Table 3).

Table 3: Factors to be assessed in a child.

It is difficult to device preventive strategies to prevent malocclusion owing to its multifactorial origin. There are some recognized behaviors, however, that should be discouraged to allow for ideal craniofacial development and some that require early referral to the paediatric dentist or orthodontist. These disorders are easily diagnosed and represent conditions in which early intervention might be appropriate to prevent future possible orofacial dysfunction. In general, measures to prevent malocclusion should be based on providing good incentives to promote normal growth and development of the face and the elimination of potential interferences that may harm these processes.

Copyright: © 2015 Sankalp S, et al. This is an open-access article distributed under the terms of the Creative Commons Attribution License, which permits unrestricted use, distribution, and reproduction in any medium, provided the original author and source are credited.