Lymphomatoid Papulosis and Breast Adenocarcinoma: More than a Simple Coincidence

Lymphomatoid Papulosis and Breast Adenocarcinoma: More than a Simple Coincidence

Patients with lymphomatoïd papulosis should be regularly monitored not only to detect the occurrence of potential hematologic malignancies, but also to look for other visceral tumors such as breast neoplasma. We report an unusual association of both lymphomatoïd papulosis and breast carcinoma in a 50 year-old patient, with good evolution of the cutaneous disease after treatment of the breast neoplasma.

A 50-year-old woman sought care for a six-year history of a recurrent, erythematous slightly pruritic and disseminated skin eruption. Her medical history was otherwise unremarkable, chiefly the absence of hormonal treatments, or a family breast cancer predisposition. The dermatological examination revealed 0.5 cm to 1 cm in diameter necrotic papulonodules and crusty papules affecting the face, the trunk and the limbs (Figure 1). The right breast examination displayed a painful tumor about six cm in diameter, remarked by the patient 3 months ago. No nodes were found. The histopathologic examination of the skin biopsy showed a marked epidermal acanthosis with irregular papillomatosis and a parakeratosis topped with central ulcerations. The dermal infiltrate had a roughly triangular-based epidermal architecture, and was composed of inflammatory cells mainly represented by small mature lymphocytes, histiocytes, neutrophils and eosinophils (Figure 2). Atypical multinucleate large cells resembling Reed Sternberg cells were found preferentially around the vessels. An immunohistochemical study revealed abnormal lymphocytes expressing the antibodies CD30 (Ber-H2) (Figure 3) and CD4 (clone Ab-8). This aspect was concluding to a lymphomatoïd papulosis type A. In search of an associated lymphoma, additional scans and laboratory tests (scans of the abdomen, and pelvis, blood count and serum chemistries) were normal. However, scans of the chest and the mammographic aspect of the right breast were disturbing. A micro-biopsy of the breast tumor showed an invasive ductal carcinoma (Figure 4). The skin lesions regressed partially within six weeks. We decided to watch nearly our patient and to refer her firstly for the breast cancer treatment. Neoadjuvant chemotherapy with FEC protocol (Fluorouracil (5FU), epirubicin and cyclophosphamide) was established expecting surgery. The evolution was characterized by the stabilisation of dermatological lesions two weeks after the chemotherapy started (Figure 5). We are now on 14 months of follow-up with good evolution, without recurrence. 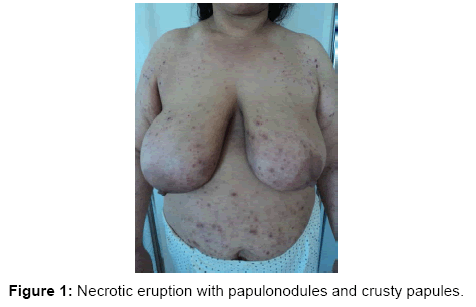 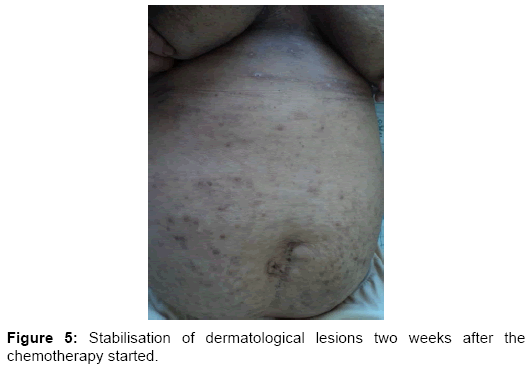 Described in 1968 by Macaulay, Lymphomatoïd Papulosis (LyP) is a scarce papulonecrotic skin eruption listed as a primary CD30 lymphoproliferative disorder with 3 histological types: A, B and C [2]. Recently, two additional types have been described: the CD8+ epidermotropic LyP type D and angioinvasive LyP type E [3,4]. The estimated prevalence rate of LyP averages 1.2 to 1.9 cases per 1,000,000 populations [5].

The association between LyP and lymphoïd malignancy (anaplastic large cell, Hodgkin disease, or mycoses fungoïdes) is well established. Nevertheless, the risk of developing a visceral cancer, in patients affected by LyP, is underreported in literature. Sanchez et al. reported that 1 of 31 LyP patients developed adenocarcinoma of the breast and colon [6]. Wang et al. noted cases of associations between LyP and lung, pancreatic, or colon malignancies including two female cases of breast carcinoma [7]. The breast neoplasma was occurring 10 to 30 years after the diagnosis of LyP. In our case report, the occurrence of the breast neoplasma was exhibited earlier than those cases reported previously. Besides, cutaneous lesions became stable once the breast cancer treatment was established. This may be defined not only by the early breast adenocarcinoma treatment but also by the histological type of LyP noticed by the skin biopsy. Although chemotherapy is not a standard treatment for LyP according to recently published international recommendations for the management of CD30-positive lymphoproliferative disorders, it was efficient in the presented patient [8]. On the other hand, complete remission of LyP after or during chemotherapy is an unusual finding, since in most cases a reduction of the number of skin lesions is observed with rapid recurrences after withdrawal of the chemotherapy.

It’s still difficult to determine whether or not LyP worsens the prognosis of these nonlymphoïd malignancies. This link may reflect differences in the host immune response to an antigenic stimulus [9]. Some factors might intervene as risk indicators for occurrence of neoplasia in patients with LyP: advanced age and sex factor (the forecast appears to be dark in men) [10].

To crown the whole, patients with LyP should be regularly monitored not only to detect the occurrence of potential hematologic malignancies, but also to look for other visceral tumors such as breast adenocarcinoma.

Copyright: © 2013 Benhiba H, et al. This is an open-access article distributed under the terms of the Creative Commons Attribution License, which permits unrestricted use, distribution, and reproduction in any medium, provided the original author and source are credited.