Background: Immune Checkpoint Inhibitors (ICIs) have become widely used in the treatment of several malignancies, and get better clinical benefits in some patients with Non-Small Cell Lung Cancer (NSCLC). However, in most of high quality clinical Randomized Controlled Trial (RCT) studies, only selected patients are needed. In Real-World Study (RWS), patients contracted simultaneously with NSCLC and Tuberculosis is common. TB reactivation during ICIs use is increasingly recognized and reported. Whether ICIs can be used in anti-tumor in patients with TB is rarely seen.

Conclusion: Our study shows that it may be feasible to combine anti-TB with ICIs for advanced lung cancer patients with active TB.

According to the 2017 World Health Organization (WHO) global Mycobacterium Tuberculosis (TB) report, around one quarter of the world’s population is infected with TB bacilli [1]. Lung Cancer (LC) is also highly prevalent in less well-developed countries. The 2020 Globocan project reported an estimated 2.2 million new cases of lung cancer globally. Immune Checkpoint Inhibitors (ICIs) are a type of cancer immunotherapy that has provided a tremendous breakthrough in the field of oncology [2,3]. But, in clinical studies of immunotherapy for LC, patients with TB have been largely excluded. ICIs-mediated modulation of the immune response has been reported to cause immune related infectious complications [4]. Also, TB reactivation during their use is increasingly recognized and reported [5]. However, there are not many reports about whether ICIs can be used in patients with TB reactivation or LC complicated with was diagnosed. The present study reports a case of an advanced lung adenocarcinoma with high Programmed cell death protein ligand 1 (PD-L1) expression complicated with active TB who was treated with anti-TB therapy and responded to Pembrolizumab monotherapy.

A 67-year-old male patient, without smoking history, with type 2 Diabetes mellitus and hypertension for 6 months. Due to progressive left limb weakness, he visited the local hospital on June 25, 2020 for head chest Computed Tomography (CT) examination and found intracranial space occupying complicated with brain edema. The patient suffered from left limb weakness, but presented without fever, cough, chest pain, headache, or weight loss. He had already received radiation treatment for intracranial lesions at other hospitals. He was transferred to our hospital for further diagnosis and treatment. We performed a physical examination of the patient upon admission. Her body temperature was 36.5°C, ECOG 1 stage. During admission, she underwent routine blood, sputum, pleural fluid, urine, and stool laboratory tests. Except γ-interferon release from Mycobacterium Tuberculosis was positive (143.6 pg/ ml), no obvious abnormality was found in other blood samples. 18F-FDG PET-CT scans showed (Figure 1A) multiple patchy and nodular soft tissue density shadow in the right apex of lung, massive density shadow in the dorsal segment of right lower lobe with cavity formation, and the possibility of inflammatory granuloma tuberculosis was considered [6-10]. And gastric body thickening, considering the possibility of malignant tumor. Therefore, CTguided percutaneous lung puncture biopsy and gastroscopy were completed, but no neoplastic lesions were observed. Meanwhile, sputum culture showed positive Mycobacterium Tuberculosis. The patient was diagnosed with active TB, and then HRZE (isoniazid 0.3, qd, rifampin 0.45, qd, pyrazinamide 1.0, qd, and ethambutol 0.75, qd) anti-TB therapy was given. The sputum smear and sputum culture were negative after 3 months of anti-TB, but CT scans showed an enlarged lower right pulmonary lesion, and large ulcers form in the stomach body was seen under gastroscopy (Figure 1B) [11-15]. We did a needle biopsy of the patient's lung and gastric area again on November 16, 2020. Histological Examination (HE) of the right lung lesion indicated that the patient had Non-Small Cell Lung Cancer (NSCLC) with a possibility of transforming into adenocarcinoma (Figure 2). Immunohistochemistry revealed that antigen Ki-67 (60%), Thyroid Transcription Factor 1 (TTF- 1) (+++), and Napsin A (+) were positive, while Programmed Death-Ligand 1 (PD-L1) (60%) was negative. Molecular pathology showed that the combined detection results of 10 mutant genes were wild type (EGFR, ALK, ROS1, RET, MET, KRAS, BRAF, HER2, NARS, PIK3CA). The pathological result of gastric body biopsy was also from lung malignant tumor. Based on the above results and observations, the patient was diagnosed with TB, target gene mutation-negative and PD-L1 high expression stage Ⅳ lung adenocarcinoma (T2bN3M1c, IVB), accompanied by gastric, lymph node and brain metastases [16-19].

After being diagnosed, the patient received Pembrolizumab as an anti-tumor treatment followed by oral HRZE as anti-TB treatment. After 2 cycles of Pembrolizumab, the efficacy of tumor was evaluated as Partial Remission (PR) (Figure 1C). And the patient achieved Complete Remission (CR) of gastric lesions. Until July 06, 2021, the patient has received 8 cycles of Pembrolizumab, with only hepatotoxic adverse reactions, which can be recovered after active liver-protecting therapy. His focus remains stable, and sputum smear and sputum culture remain negative, follow-up showed no relapse of tuberculosis infection or tumor progression [20].

LC has been the most common cancer and the leading cause of cancer-related death worldwide for several decades. And a population-based study about Global patterns and trends in lung cancer incidence showed the risks among recent generations have various degrees of increasing in many countries. In the past decade, significant advances have been made in the science of Non-Small Cell Lung Cancer (NSCLC) [21]. In addition to conventional chemotherapy, the treatment of lung cancer has also evolved with the introduction of several lines of Tyrosine Kinase Inhibitors (TKIs) in patients with EGFR, ALK, ROS1, and NTRK mutations. Furthermore, ICIs have dramatically changed the treatment outlook for NSCLC. LC complicated with pulmonary tuberculosis is a special group, and most of these patients are excluded from the research on ICIs. Recent research has shown that antibioticinduced disruption of the microbiota may impact ICI efficacy [22]. A systematic review and meta-analysis of study displayed that despite the high heterogeneity between studies, OS still revealing a significantly reduced survival in patients with NSCLC exposed to antibiotics. And the effect seems to depend on the time window of exposure with stronger effects reported when the patients took antibiotics within 60 days around ICIs initiation [23]. However, there are no separate studies on the efficacy of between anti-TB therapy and immunotherapy.

According to the Tuberculosis Treatment Guidelines, patients with active TB should be treated as soon as possible. Our patient's sputum culture was positive for Mycobacterium Tuberculosis, which met the diagnostic criteria of active TB. We gave him intensive anti- TB therapy for 3 months, but CT showed that the focus in the lung was larger than before (Figures 1A and 1B). The patient underwent a second lung biopsy, and he was eventually diagnosed with lung adenocarcinoma and active TB. But his genetic tests suggested that there were no target mutations that could benefit. Considering that his high expression of ICIs and excluding the absolute contraindication, he was given to Pembrolizumab at the same time of anti-TB. After 2 cycles of treatment, we made a comprehensive evaluation of him, and found that the primary lesions of the lung, stomach, lymph nodes were significantly reduced, the curative effect evaluation reached PR (Figures 1 and 3). To further elucidate the impact of anti-TB on the efficacy of ICIs, we perform a systematic review of the literature using PubMed, EMBASE and meeting proceedings. Finally, ten cases were included together with the case reported in this report (Table 1). Of the ten cases included, eight were male and two were female with a median age of 63.7. The underlying malignancies consisted of six cases of adenocarcinoma (ADC), two cases of melanoma, one case of oral Squamous Cell Cancer (SCC) and one case of Merkel Cell Carcinoma (MCC). Five were treated with pembrolizumab while five were treated with nivolumab. After treatment concurrently with anti-TB and ICIs, one patient developed Immune-Related Adverse Events (irAEs) eSjogren’s syndrome, one patient developed irAEs adrenal insufficiency, four patients developed irAEs lowgrade toxic hepatic, two patients were not occurred irAEs and two patients were not documented irAEs. Except for two cases whose specific information could not be obtained, sputum smear and sputum culture of TB were negative in six cases when ICIs was started (Table 2). For the total anti-TB course, except for one case who had been treated for more than 4 years when the case was reported, the choice was between 6 and 8 months (the median time was 8.6 months). In terms of treatment outcome, CR was obtained in two cases, PR was obtained in four cases, SD was obtained in 1 case, and PD was obtained in one case (Figure 4) [24].

Table 2: Treatment of TB and outcome. 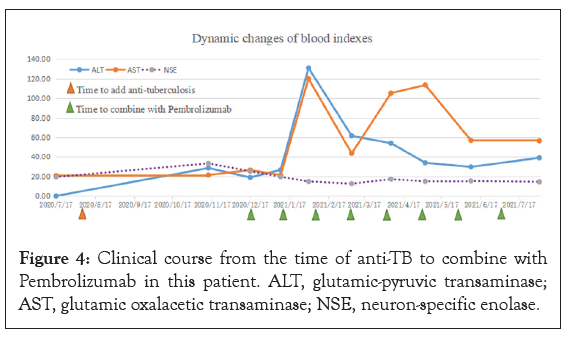 Summary analysis shows that anti-TB has no obviously effect on the efficacy of ICIs, with seven of the eight cases that could be analyzed achieving good results. For suitable populations selected by anti-TB combined ICIs, ECOG scores between 0 and 2 are more recommended, and generally good treatment outcomes can be achieved. When ECOG is over 2, combination therapy is not recommended, because it may accelerate disease progression. The main adverse reactions of anti-TB combined with ICIs are mainly hepatotoxicity, and the liver function can be maintained normal after liver protection therapy. According to WHO guidelines, normal anti-TB treatment takes at least 6 months, but further clinical studies are needed to determine whether anti-TB treatment should be extended when combined with immunotherapy. And further research is needed on the timing of drug combination.

Conclusion, it can be found from our article that anti-TB may have little effect on ICIs, and it is worthwhile to conduct a larger cohort study in the future to verify the effect of anti-TB on ICIs.

This work has been strongly supported by Long gang District Science and technology innovation Bureau (LGKCYLWS2020104).

The original contributions presented in the study are included in the article/Supplementary Material. Further inquiries can be directed to the corresponding author.

All procedures performed in studies involving human participants were in accordance with the ethical standards of the institutional and/or national research committee(s) and with the Helsinki Declaration (as revised in 2013). Written informed consent was obtained from the patient.

The authors have consented to publication.

Copyright: © Xu J, et al. This is an open-access article distributed under the terms of the Creative Commons Attribution License, which permits unrestricted use, distribution, and reproduction in any medium, provided the original author and source are credited.

Sources of funding : This work has been strongly supported by Long gang District Science and technology innovation Bureau (LGKCYLWS2020104).