Background: Intralesional triamcinolone acetonide (TAC) injections are often used as the first alternative for treating keloid scarring. The long-term outcome of this treatment is unclear. Also, undesirable local side effects have been recognized in clinical work and literature but they have been labelled as harmless and rare. Methods: We documented the long-term outcome of intralesional TAC injections in the treatment of keloid scars in Tampere University Hospital. The main objectives were to investigate the remission rate and the occurrence of local side effects. We assessed 105 patients (46 women, 59 men) with 138 TAC treated keloid scars at the outpatient clinic. The keloids were photographed and assessed with Patient and Observer Scar Assessment Scale (POSAS). Results: Of the 138 keloids, 90 (65%) were clinically in remission. Local side effects, including atrophy of the skin or the subdermal fat, telangiectasia and cortisone traces, occurred in 55% of the cases. The number of injections did not correlate with remission rate or the occurrence of local side effect. ROC curve analysis showed that surface area >620 mm2 was a prognostic factor for not responding to TAC treatment. Conclusion: According to this study, intralesional TAC injections seem to be effective in the treatment of small keloids but not in larger than 620 mm2. Local side effects were more frequent than previously reported and occurred even after just 1 injection. The side effects seem to be permanent in nature.

Keloid scars may develop following any trauma to the skin. The size of the keloid is often disproportional to the size of the original trauma. By definition, keloids are benign locally aggressive dermal fibro proliferative tumours that grow beyond the boundaries of the original wound [1,2]. The etiopathogenesis of keloid scarring has remained poorly understood to date [2-5]. In addition to pain and itching, keloids also cause functional and aesthetic impairment. Left untreated, they may cause substantial long-term morbidity and emotional stress [2,6-8]. It has been estimated that in the year 2000, 11 million people were affected by keloids in the developed world alone [2].

Keloid management can be difficult and frustrating for the patient as well as the clinician. There is no clear consensus on optimal keloid treatment. Intralesionally injected steroids, especially triamcinolone acetate (TAC), are commonly used as a first-line treatment. As early as in the 1960s, authors reported curative results in up to 80% of the cases [9-12]. Other, more recent studies suggest recurrence rates between 9% and 50% with this line of treatment [13-17]. Alternative treatment options include surgery followed by radiotherapy, and other injectable substances, such as 5-fluorouracil, bleomycin and verapamil [18].

It has been stated, that some keloids do not respond to TAC injections, these cases are considered steroid resistant [19,20]. There is no consensus or clear indicator to detect steroid sensitive cases [19].

Systemic effects of steroids in keloid treatment are rare, but some cases of Cushing syndrome have been reported, especially in children [21-23].

However, there are known local side effects related to the TAC injections, such as atrophy of the skin and the subcutaneous tissue; telangiectasia; and pigmentation changes [7,18,24]. It has previously been reported that although these effects may occur frequently, they are usually resolved without intervention [14,18,25]. In our experience, these effects tend to be longstanding and sometimes permanent, sometimes needing surgical treatment.

The main objective of this study was to critically evaluate the longterm outcome and adverse effects of keloid treatment with TAC injections.

Initially, 270 invitation letters were sent to patients with diagnoses of keloid scars in their medical records; 127 patients visited the outpatient policlinic. 105 patients were diagnosed of having one or more actual keloids (46 females and 59 males). This resulted in 138 keloid scars that had been treated with TAC injections in Tampere University Hospital 1996 and 2014.

The keloids were assessed with a validated scar scale, Patient and Observer Scar Assessment Scale (POSAS) and a spectrocutometry camera, as used in previous studies [26,27]. Both the patient and the observer filled the POSAS form during visiting the outpatient clinic. The POSAS scale consists of 6 items for the patient and the observer, ranging from 1 to 10, giving an overall score of 6 to 60. In this study a single observer assessed all the scars. The site and size of the keloids, their etiology, received TAC injections, other treatment, subjective and objective adverse effects and the remission rate were documented. Any scar that was raised above the level of the surrounding skin and/or had symptoms relating to an active keloid (itching, pain) was defined as a recurrence.

Approval of the local ethics committee was obtained for the study. The statistical assessment was carried out by a biostatistician. Statistical analysis were performed with SPSS version 21.0 software (SPSS Inc., Chicago,IL). Categorical variables were analyzed by the χ2 – test. Keloid area and remission analysis were performed using ROCanalysis. P-value less than 0.05 were considered statistically significant.

The mean age of the patients was 41.5 years (range: 18-82). The most common anatomic site was the thoracic region (37%). The three most common etiologies were surgery (46%), acne scars (25%), and traumatic wounds (9.8%). The mean follow-up time was 4.27 ± 3.78 years. 65% of the TAC treated keloids were in remission at the time of evaluation. However, when the size of the keloid was measured, 82% of the keloids not in remission were larger than 620 mm2. This mathematical cut point was achieved using ROC analysis.

The mean treatment rate was 3.0 injections (range 1-10). However, multiple injections did not lead to better results (Figure 1). The least recurrences occurred in the group with only 1 injection, although this was not statistically significant (Table 1). 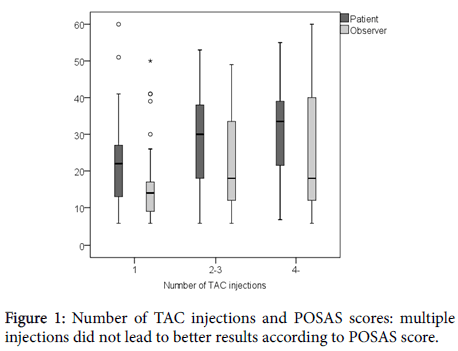 Figure 1: Number of TAC injections and POSAS scores: multiple injections did not lead to better results according to POSAS score.

There were local adverse effects in 55% of the keloids. There was no correlation between the number of injections and the adverse effects (Table 1). However, the difference between groups (local side effects and non-side effects) wasn´t statistically significant. 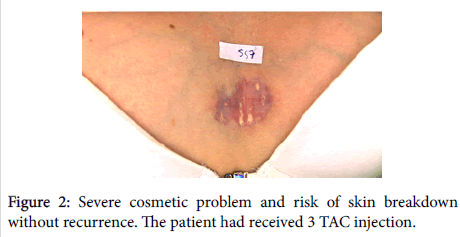 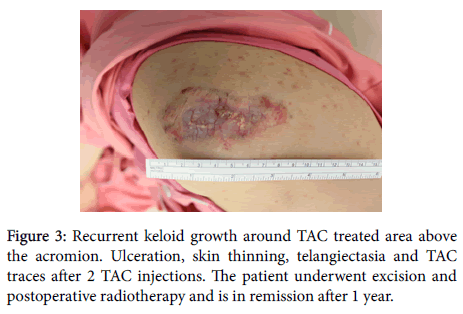 Figure 3: Recurrent keloid growth around TAC treated area above the acromion. Ulceration, skin thinning, telangiectasia and TAC traces after 2 TAC injections. The patient underwent excision and postoperative radiotherapy and is in remission after 1 year.

According to several publications, intralesional TAC treatment is a standard first-line treatment modality in keloid scars [18,19,30,31]. It has also been the most common treatment option in our hospital.

Hollander first reported the use and efficacy of intralesional TAC injections in keloid treatment in 1961 [9]. Later, Griffith and Vallis reported curative results and improvement in appearance after TAC injections [10,12,32]. These trials showed symptom relief in up to 80% of the cases [18]. In our study, the overall remission rate (65%) was somewhat lower than in previous studies. Muneuchi et al. also reported less favorable results than the previous studies; there was improvement in subjective symptoms in 82% of patients, but objectively the results were good or better in only 39% of the cases [30].

An interesting finding in our study was that a surface area larger than 620 mm2 was a prognostic factor for not responding to TAC treatment. This would indicate keloids 2 x 3 cm or larger. Previous authors have not investigated the size of the keloid when reporting recurrence rates. Larrabee et al. estimate that roughly 50% of keloids might be “cortisone resistant” [20]. It is reasonable to assume, that the recurring, larger keloids had grown faster and were thus more aggressive than the minor keloids that responded well to treatment. Although this is not sufficient evidence to suggest that major keloids do not respond to TAC injections, it warrants further investigation to possibly avoid unnecessary, ineffective treatments.

We found that 55% of keloids treated with TAC had long-term local adverse effects. Due to the long follow-up time (4.27 ± 3.78 years) in our study, it is safe to say that a large number of these side effects are permanent in nature. This finding is in contrast with previous studies that have suggested significantly lower complication rates. Davidson et al. reported local TAC complications in 15%, and Sadheginia et al. did not detect any visible side effects in their group of 20 patients, who were treated with TAC injections [33,34]. Furthermore, the number of injections was lower in our patients. Muneuchi et al. used 20-30 injections over 3-5 years, but reported only few local side effects. The concentration of TAC and the injection technique reported in their study did not differ from the technique generally used by professionals treating keloids [30].

Muneuchi et al., Sadheginia et al., and Davidsonet al. did not report systemic complications or local adverse effects which needed further treatment [30,33,34]. We recorded 5 patients, who were operated on due to local side effects from TAC injections, but no systemic side effects in our follow-up.

.A further finding in our study was that increasing the number of TAC injections did not yield better long-term results. On the contrary, patients treated with less than 4 injections had better results compared to patients receiving 4 or more injections. This finding may support the suggestion made by Ud-Din et al. who state that a certain number of keloids are less affected by cortisone treatment and thus exceeding the number of treatments does not improve the outcome [19]. The mechanism behind this is unclear and requires further investigation.

It is also worth noting, that there was no correlation between local adverse effects and the number of injections in our study.

The weakness of this study was its retrospective nature, which may cause selection bias. Some patients with good results may not answer to the letter that was sent to them. The response rate was 47%. Since the exact amount of TAC used in each treatment session was not recorded in all the patients, we could not draw clear conclusions on whether the side effects are related to injection technique, type of steroid or the amount of injected steroid per cm2. However, the material represents the current shape of treatment in our institution following the current guidelines that the keloid patients receive and their long-term results. It also supports the previous finding that some keloids do not respond to cortisone treatment, and the size of the keloid may be used as an indicator when planning treatment.

According to this study, it seems that while intralesional TAC injections are not quite as effective as reported in previous studies they still offer curative results especially in minor keloids, also in the long-term. However, local adverse effects are common and may occur even after a single treatment. These complications are not expected to diminish and may, in the worst case, require further treatment. The patient must be advised about this before the treatment, especially when being treated for minor keloids with minimal symptoms.

Also, a higher number of injections did not lead to a better outcome in terms of the recurrence rate. Therefore, it is advisable to limit the injections to 4 or less and, in cases where there is no significant improvement, to consider other lines of treatment instead.

This study was supported by Orion Pharma Research Fund and Competitive State Research Financing of the Expert Responsibility area of Tampere University Hospital, Grant 9R025. We would like to thank Mrs Elina Adams for the language revision.

Copyright: © 2016 Hietanen K, et al. This is an open-access article distributed under the terms of the Creative Commons Attribution License, which permits unrestricted use, distribution, and reproduction in any medium, provided the original author and source are credited.