Keratosis Lesion on the Nose

Keratosis Lesion on the Nose

Porokeratosis (PK) is a rare skin disease, of unknown etiology, probably due to a disorder of epidermal keratinization. We describe a 24 year-old male patient, with porokeratosis of Mibelli confirmed histopathologically. A young man of 24, from a non-consanguineous marriage, presented to our department with 4 years history of one hyperkeratotic lesion, symmetric, painless and non-pruritic on the nose. Clinical examination revealed the presence in the left wing of the nose, one annular lesion, measuring about 0.5 cm, the centres was atrophic and surrounded by a raised hyperkeratotic border.

Porokeratosis (PK) is a rare skin disease, of unknown etiology, probably due to a disorder of epidermal keratinization. We describe a 24 year-old male patient, with porokeratosis of Mibelli confirmed histopathologically.

A 24-year-old man, a farmer by profession, without pathological history, consulted for a papular, rounded, slightly squamous lesion. Measured 0.5 cm in diameter, with raised border and depressed squamous center. This lesion is on left wing of the nose (Figure 1). This lesion evolved asymptomatically for 4 years. Figure 1: Keratosic lesion on the nose.

The discussed diagnostics were discoid lupus, basocellular carcinoma, bowen disease and porokeratosis of Mibelli. A skin biopsy showed the presence of the coronoid lamella (Figure 2) confirming the diagnosis of porokeratosis of Mibelli. A local treatment by retinoid was administered but it was suspensif. Cryotherapy has been a great success without recurrent lesion after 24 month. 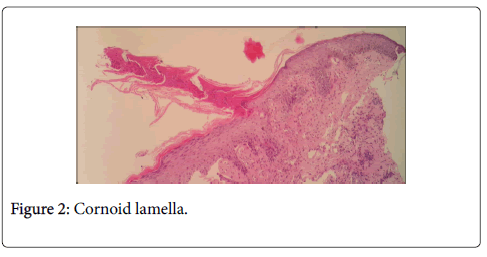 PK was first described and named so by Mibelli in 1893, but still the etiology of PK is unclear [1]. Clinically, characterized by annular plaques with an atrophic center with hyperkeratotic edges [2]. It includes a heterogeneous group of disorders that are mostly inherited in an autosomal dominant form [1]. We can describe many types (Porokeratosis of mibelli, linear porokeratosis, punctuate keratosis, palmoplantar leratosis) [3]. But histologically, they all have in common the presence of a cornoid lamella [1]. This desease may be associated with immunosuppression (leukemia, organ transplant) and may undergo malignant transformation [4].

Copyright: © 2017 Kissou A, et al. This is an open-access article distributed under the terms of the Creative Commons Attribution License, which permits unrestricted use, distribution, and reproduction in any medium, provided the original author and source are credited.