Horst and graben structure is the symbolic depiction of extensional tectonics in Pakistan, which was our research study area with (Bitrisim) as a communal example. To carry out the structural and stratigraphic interpretation of our study area, we used two seismic dip lines and one strike line. Two way time and depth mapping helped in outlining the structural trend and understanding the tectonics of the area. Subsurface mapping indicated that the major fault trend was NNW-SSE. There were marks of faults breaking out, indicating the existence of various tectonic periods. The dominant structural trend of the area provided the basic components of a profile petroleum system. We also tried to find the porosity and volume of the shale. 1D modeling has been done for the wells of Fateh-01. The zone under observation was Lower Goru. Porosity calculations were made to determine the water and hydrocarbon saturation. The main elements of a petroleum system are presented and also proven by a number of oil and gas findings, but there is still a need for advanced techniques to improve seismic resolution and the excellence of interpretation.

The study area is located in the Khairpur district, Sindh province with 26° 25’ to 28°41’ north latitude and 68°0’ to 69°31’ east longitude [1]. Sanghar is the main town approximately 40 km south of the location. It is located in central Sindh Province and bounded on the North by the Jacobabad High (Sukkar ridge), East by the Jaisalmir High, south by the Thar Slope and Nagarparkar Ridge and west by the Thatha and Hyderabad Highs as shown in Figure 1. Application of Geogenic electromagnetic radiation (EMR) in geosciences has been increasing. A play is group of geologically related prospects having similar conditions of source, reservoir and trap [2]. Within a basin the occurrence of play features shows an important role in hydrocarbon growth. Shale sequences in the Sembar and Lower Goru formations are known to be source rocks and they are well established in this area [3]. The Key objective of our research is to study the basal sand of lower Goru formation. Basal sands of lower Indus Basin is the main hydrocarbon producer [4]. There is quite interesting stratigraphy of the lower Goru sand which could be another well-established reservoir of this area due to its thickness. However, it has not been reported yet in the literature (Table 1). The thick Shale sequence of the upper Goru Formation served as a cap rock for the underlying lower Goru sand reservoir [5].

The study area is an old exploration concession known as the Old Tajjal Concession situated in the Lower Indus Basin. The initial 2D seismic data in the investigated area was acquired for 6 to 7 kilometers along a horizontal profile in the year 1988. The seismic profiles are generally east west trending with some tie lines in the north south direction. The prospective areas were subsequently in-filled with more data. The current study area is one of them, in which the central area was considered more prospective than the western area. In the year 1989, a NE–SW orientated, 2 kilometer spaced seismic grid, with a shot point interval of 50 m and 60-fold coverage was acquired. This was extended in 1990 to the west, but with a 25 m shot point interval and 120-fold coverage. The seismic source used was vibroseis. The area is generally covered with sand dunes of the Thar Desert [6]. The horizons of the noticed layers and faults were marked on the seismic section of the lines. The locations of the line, the exact position of the well and the seismic base map can be seen in Figure 2. Figure 2: Map showing the location of 2D seismic lines and well locations of the Bitrisim area.

All the seismic data processing is reliant on the seismic data reflection theory, which gives the info of the subsurface [7]. To attain the desired purpose of the research work, several seismic lines were applied. The processing flow chart shows how several seismic lines were are processed and then interpreted. Seismic data processing is composed of basically five types of corrections and adjustments: time, amplitude, frequency-phase content, data compression (stacking) and data positioning (migration). These adjustments increase the signal-tonoise ratio, correct the data for various physical processes that obscure the desired (geologic) seismic information, and reduce the volume of data that the geophysicist must analyze. The various processing steps involved in our seismic data processing are shown in Figure 3. Geophysical surveys are formed by data acquisition systems measuring different physical fields and signals, e.g., seismic, electromagnetic, gravity, and/or magnetic [8]. The horizons of common interest and the faults were marked by using the Kingdom software for the different seismic lines. For the location of the line and precise position of the well, the seismic base map was drawn using the software too. Based on the time of the marked horizons, the time sections were set and were then converted into depth sections using average velocity (Figures 4 and 5). The depth section is used to see the structures existing in the area. Figure 4: Time section showing the horizon and the faults of the Bitrisim area. Figure 5: Depth section showing the horizon and the faults of the Bitrisim area.

In addition to the above work, the physics and engineering properties of the rocks are assessed giving clear information about the hydrocarbon bearing zone. Variations in the velocity and density showed prominent acoustic impedance contrast [9]. No sure fault trend exists, but localized normal faults do exists due to extensional tectonics during the Eocene. Very few cross faults are present in the area. The normal faults make the local scale horst and graben structures promising for the accumulation of oil [4]. From stratigraphic interpretation, after studying and analyzing the seismic data and contour maps, the following results are presumed. Above the Pirkoh Limestone the behavior of different lithologies is uncertain, which probably specifies the presence of an unconformity or erosional surface. There is thickening of the strata in the southwest direction. This effect is probably due to the occurrence of the Mari-Kandkot High in the northeast of the study area. There is clearly a change in the depositional environment indicated by the phenomenon of thinning and thickening [10]. There is a thinning of the strata in the northeast direction. To evaluate the hydrocarbon potential of the wells, the following reservoir parameters are calculated [11].

Two way travel times of horizons are picked from the seismic section and manually plotted on the base map for time contouring and, similarly, depth contour maps are generated by converting time into depth [12,13]. The formula employed is:

where S is the depth of the reflector, V is the average velocity and T is the Two-way time of the reflector obtained from the seismic section as given in Figures 6-9. The horst and graben structures and step faults can be seen, which are typical of an extensional regime. The faults dip in the NW-SE direction. The time and depth contour maps follow the same trend [14]. From correlative study of all seismic lines with time contour and depth contour maps, the following structural interpretation results are concluded:

Estimation of water saturation and hydrocarbon saturation in the Chilton Limestone proposes the possibility of four possible zones met at variable depths as debated.

Porosity plays an important role in fabrication of the well. If the porosity (Ф) is greater than 6%, the formation is observed as a productive formation. The porosity of each meter is averaged to calculate the total reservoir pore volume [15-18].

The formula for average porosity is

where Фav is the average porosity and n is the total number of pores.

By using the above relation the outcomes can be obtained as shown in Figure 10. 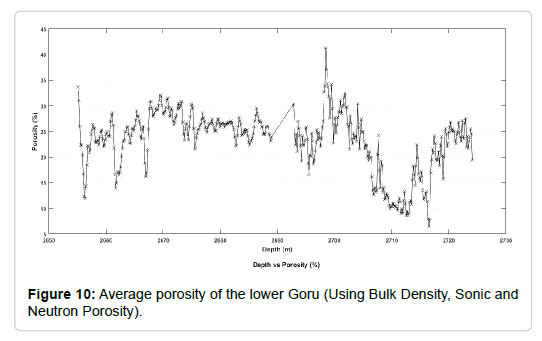 The average water saturation is calculated by the following formula:

By using this equation the average water saturation is shown in Figure 11. 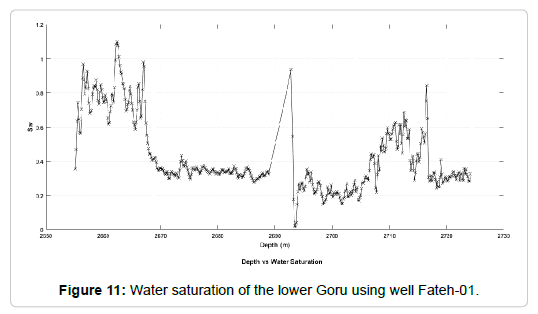 Net pay thickness is stated as “the thickness of the reservoir that can produce commercial quantities of hydrocarbon” [20].

With the help of the available data we have calculated the net pay thickness as shown in Figure 12. 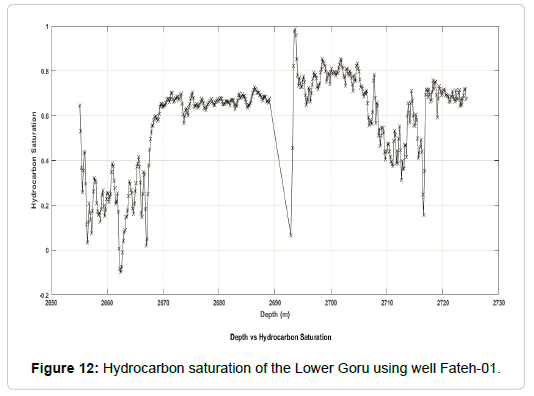 Volume of the shale 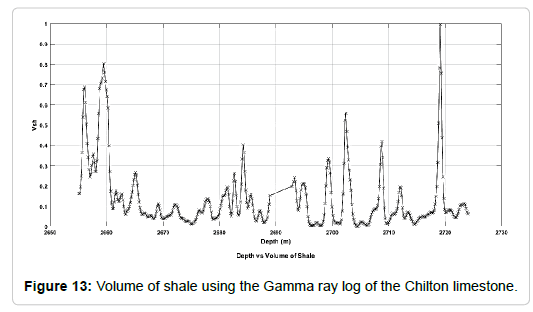 Figure 13: Volume of shale using the Gamma ray log of the Chilton limestone.

Original gas in place is calculated by the following formula:

Where Gr is the volumetric recoverable gas reserves in standard Cubic feet (SCF) and RF is the recovery factor.

Data obtained from Fateh-01 that we interpreted above and from the result for the total reservoir of gas are found below:

According to the study it is concluded that the area is an extensional regime. Step faults with the horst and graben structures are present and normal faulting dominates throughout the area. The horizons that we have marked on the seismic section showed normal faults. The area of concentration was basal sand and the porosity of that sand in the exact area is not lavish. The closures have values ranging from 5-10 milliseconds, generally in the southwest at the level of the Chilton Limestone. The closures have values of 20-25 milliseconds toward the north and 15-20 milliseconds towards the south at the Ranikot level. The potential zones exist in the southwest of the study area at Chilton Limestone level, and in the north and southwest at Ranikot level. The average values of porosity for each industrious zone range from 20% to 23%. The average values of water saturation ranges from 18% to 20%, and the average values of hydrocarbon saturation range from 78% to 82%. The total reservoir rock volume is calculated to be as approximately 8896 acres. After our study, we suggest that high resolution data and further advanced techniques should be used, that can achieve much better results in the area.

The Oil & Gas Development Company Ltd. (OGDCL) and Directorate General of Petroleum Concession are acknowledged for providing the seismic lines, sections and other relevant data.

Copyright: ©2018 Iqbal I, et al. This is an open-access article distributed under the terms of the Creative Commons Attribution License, which permits unrestricted use, distribution, and reproduction in any medium, provided the original author and source are credited.
Top