Optimal therapy in CHF patients was subject of many studies that reported decreased awareness regarding of the severity of this disorder and the underuse of evidence based treatment [1-7]. Literature data suggest yet a trend of improvement in adherence to the treatment recommended by guidelines over time, due to both implementation of educational programmes and also increased awareness of the medical staff. Guidelines adherence was demonstrated to occur also spontaneously, in the absence of any specialized intervention [8].

CHF diagnosis, management and treatment are made based on evidence obtained from clinical, cohort, epidemiological or observational studies as well as physicians’ clinical experience. Treatment guidelines of the European Society of Cardiology summarize relevant evidence regarding risks and benefits of certain therapeutic interventions, and are meant to support physicians of any specialty in decision making regarding the management of this condition [9,10].

In 2008, the European Society of Cardiology published the Guidelines for the diagnosis and treatment of acute and chronic cardiac failure, a review of previous guidelines published in 2005.

Both guidelines underline the importance of implementing the guidelines in the clinical practice in order to increase survival, improve morbidity and quality of life. The physicians adherence to treatment guidelines as well as the patients compliance are compulsory [9,11].

Within this context, this study proposes to investigate cardiologists adherence to the Guidelines for diagnosis and treatment of heart failure issued by the European Society of Cardiology in patients admitted to the Cardiology Department of the Rehabilitation Hospital of Cluj-Napoca, Romania, and analyze dynamics changes in guidelines implementation in the clinical practice between 2006 (ESC Guidelines 2005) and 2009 (ESC Guidelines 2008), analyzing by comparison the results obtained in the two years. It is expected to notice that the natural course of the guidelines implementation over the past few years was followed, since no special awareness measures, such as programmes for increasing medical staff awareness, or programmes designed to improve patients compliance and consequently improving quality of life were applied within this time frame.

This study was retrospective, observational. Two cohorts were investigated. The first cohort included 415 patients - 179 females (representing 43.1% of the patients), 236 men (representing 56.9% of the patients), aged between 32-92 years, mean age of 67.07±10.59, who were admitted with a diagnosis of chronic heart failure (CHF), NYHA class II-IV, to the Cardiology Department of the Rehabilitation Hospital of Cluj-Napoca, over a year, between January 2006 and December 2006.

Data were gathered from patients’ charts and discharge recommendations/ medication list. In all patients, the drug treatment prescribed during admission and upon discharge was followed and compared with the recommendations made by the ESC Guidelines for diagnosis and treatment of CHF published in 2005 and 2008 respectively. Additionally, treatment and guidelines adherence were compared between the two years – 2006 and 2009.

Statistical analysis was performed by using SPSS 16.0 for Windows, Medcalc 10.3.0.0. The χ2 test was used in the analysis of differences between qualitative variables. Normal distribution of continuous numerical variables was checked by the Kolmogorov-Smirnov test. Differences among continuous qualitative variables were assessed with the aid of Student’s t-test (unpaired and paired), while for distribution variables noncomplying with the normal condition, non-parametric tests (Mann-Whitney U) were used. The logistic regression was applied to identify independent prediction factors. A value of p<0.05 was deemed statistically significant.

The comparative features of the patients for the two years are showed in Table 1.

Table 1: Comparative features of patients for the two years. 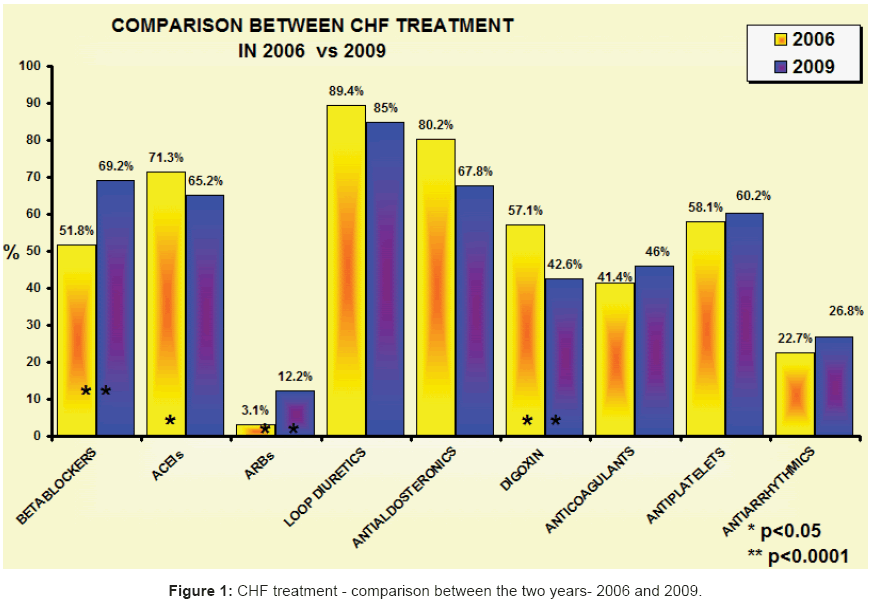 From certain points of view, the CHF treatment in women improved in 2009 in comparison to 2006. Beta-blockers and ARBs were administered in more frequently- p<0.05. The prescription rate of loop diuretics decreased - p<0.05, along with the use of digoxin and aldosterone antagonists, p<0.01. There was no difference regarding the use of ACEIs and antiplatelet medication.

Men were also more frequently prescribed beta-blockers and ARBs – p<0.01, yet they received significantly less ACEIs, digoxin- p<0.01 and aldosterone antagonists p<0.05. No differences were registered in the prescription of antiplatlets and loop diuretics.

Prescription of beta-blockers in both sexes between 65-74 years of age was reduced in 2009, yet in females, differences were more significant than in men (p=0.003 vs p=0.02). ARBs and nitrates were less frequently recommended in 2009, yet in this case, a statistically significant difference (p=0.02) was registered only in men. Diuretics and aldosterone antagonists were less frequently recommended in females in 2009 (p<0.001), with no changes in men.

In 2006, digoxin was more frequently used than in 2009, when the prescription rate of beta-blockers and amiodarone increased – Figure 1. In 2009, no patients were treated with propafenone.

In 2009, patients with ventricular arrhythmias and CHF benefited were treated more frequently with beta-blockers (p=0.01) - Figure 1. 2% of the patients received sotalol, compared to 2006, when it was not recommended.

Beta-blockers were also administered more often to patients with pulmonary obstructive diseases in 2009 - 34.10%, compared to 28.6% in 2006, yet they remain underused in this subgroup of patients.

We have analyzed the differences between CHF therapies in these two years, depending on ejection fraction - Figure 2. In 2009, there was an increase of 12.9% in the use of ARB’s, especially in patients with an ejection fraction > 45%. Betablockers have been prescribed more frequently in 2009, especially in patients with a low EF. Spironolactone and digoxin use has decreased, but more significantly in CHF with a preserved EF. 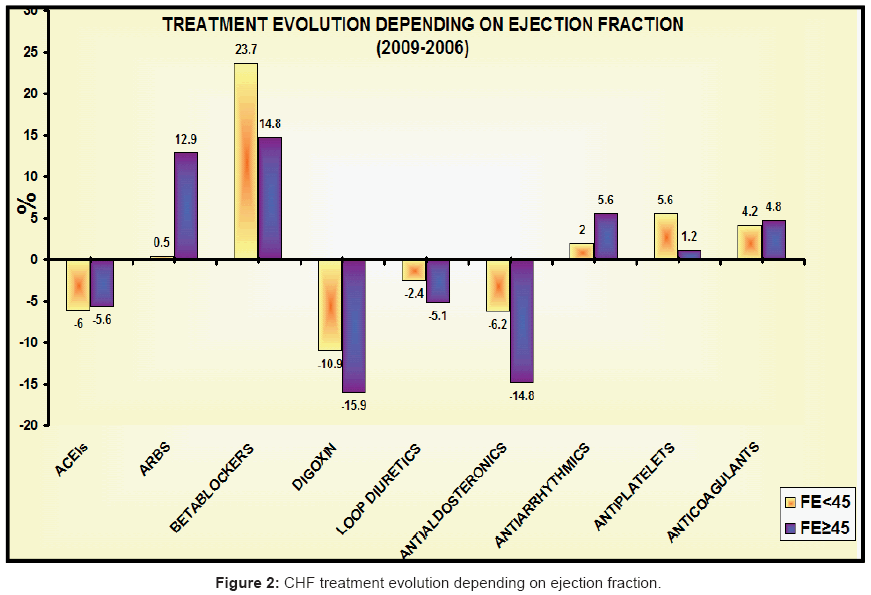 As regarding the therapy of patients with low ejection fraction, in men there was a significant increase in the use of betablockers, from 50% in 2006 to 78.6% in 2009 (p<0.0001). In women with systolic heart failure, we found no significant differences regarding the classes of medication that was used- Figure 4. Figure 4: Treatment’s evolution in patients with ejection fraction less than 45% between 2006-2009.

In this study, there were compared the characteristics and the modality of treatment in CHF patients discharged from a General Romanian Hospital in 2009 (after the 2008 ESC guidelines were published) , with those of an analogous patient population observed three years earlier, in 2006 (after the 2006 ESC guidelines were published). It was noted that there were several statistically significant differences between the two years, and overall CHF treatment improved over time.

Beta-blockers are in class of recommendation IA, level of evidence A, in both guidelines- 2005 and 2008 [9,11-14] Studies have confirmed that their use improves morbidity and mortality in CHF patients. In our study, beta-blockers were more commonly used in 2009, irrespective the patients’ sex, CHF etiology or age. Overall the use of beta-blockers increased in 2009, independent of NYHA functional class and CHF type (systolic or diastolic), the most significant differences being obtained in patients NYHA class IV and in those with EF < 45%. Although the administration of selective beta-blockers is no longer contraindicated in patients with COPD [15,16], some physicians take this into account, others do not, hence although beta-blockers were recommended to these patients in higher percentages in 2009 compared to 2006, their prescription rate is still low.

Frankenstein and colleagues monitored the evolution treatment adherence to guidelines between 1994-2000 and 2001-2007 and have established that the use level of ACE inhibitors and ARBs decreased, being though associated with an increase in beta-blockers and aldosterone antagonists prescription [8]. In our study, ARBs were much more frequently administered in 2009, especially in patients with preserved ejection fraction and hypertension. In the 2008 guidelines ARBs have a class of recommendation and level of evidence IA, in comparison to the 2005 guidelines-class of recommendation and level of evidence IB, being recommended in all patients with CHF and low ejection fraction, symptomatic already treated with beta-blockers and ACEIs, unless they are treated with aldosterone antagonists [9,11]. However, concurrent administration of the three RAAS inhibitors - ACEI, ARBs and aldosterone antagonists is not encouraged [11]. Thus, guidelines recommend that aldosterone antagonists should be administered especially in patients with low EF, NYHA functional classes III-IV [11]. Recent studies (ALDO-HF- Aldosterone Receptor Blockade in Diastolic Heart Failure and TOP-CAT- Treatment of Preserved Cardiac Function Heart Failure with an Aldosterone Antagonist) suggest that spironolactone and eplerenone could also be used in patients with less severe congestive syndrome, NYHA classes II-III, as it is well known that they have anti-fibrotic effect, improving cardiac remodelling in CHF [17]. In our study, administration of aldosterone antagonists was reduced in 2009 compared to 2006.

Digoxin recommendation changed also from class of recommendation IIa, level of evidence A in 2005 to class of recommendation IIa, level of evidence B in 2008. [9,11]. In our study, digoxin was often recommended, especially in 2006, when its level of prescription exceeded that of beta-blockers. The percentage of patients who were recommended digoxin was though lower in 2009. Increased administration of digoxin may be explained by the fact that atrial fibrillation was commonly present in our patients. Other studies report an AFib percentage of approximately 25-30% [19-21]. More than two thirds of the patients taking digoxin were diagnosed with atrial fibrillation, yet, more than half of the patients in sinus rhythm that were also treated with digoxin, had an EF ≥ 45%, which does not justify this treatment.

The rate of prescription for antiplatlets did not significantly change overall, except in women younger than 64 years of age, in whom their use increased in 2009. In addition atiplatelet agents other than aspirin, such as clopidogrel, dipyridamole and triflusal were used. It is well known than in CHF patients, thromboembolic complications and stroke are relatively common, regardless of atrial fibrillation presence. In this context, the chronic administration of antiplatelets leads to reduced morbidity and mortality and improved quality of life in CHF patients [22].

The treatment of both females and the elderly improved in 2009 in comparison to 2006, having a similar course to the global treatment, with increased in ARBs and beta-blockers and decrease in diuretics, aldosterone antagonists and cardiotonics prescription. These data are not concordant to those reported by Frankenstein and collaborators in 2010, who argue that the female sex and advanced age associate with poor adherence to guidelines [8].

When compared to men, females seem to be protected by ischemia, most likely due to hormonal differences between the two sexes [23]. The mean ejection fraction of the patients included in the study was over 45%, especially in the females, who were more frequently diagnosed with heart failure with preserved ejection fraction. Most of the trials performed, investigating the efficiency of various drug therapies in CHF patients included mainly patients with systolic CHF [24]. In our study, in 2009, the percentage of females with preserved ejection fraction was higher than in 2006, which could be explained by the larger number of females over 75 years of age considered in the study, being common knowledge that females and advanced age are characterized by diastolic CHF [25,26].

Our study was different than other types of trials like for instance IMPACT-RECO, which used educational activities meant to increase guidelines adherence [28]. It has been demonstrated that, to a certain extent, improvement of CHF management is made spontaneously, even in the absence of specialized programmes. It cannot be totally excluded the role of multiple studies published after the 2005 ESC issue of the Guidelines for the diagnosis and treatment of CHF, which have confirmed the underuse of recommended medication to these patients.

The adherence to guidelines improved during a three- year period in Romania. Renin-angiotensin inhibitors, beta-blockers and diuretics are used according to the guidelines recommendations, however antiplatelet drugs remain underused. Gender and age did not significantly influence treatment.

Copyright: © 2012 Penciu OM, et al. This is an open-access article distributed under the terms of the Creative Commons Attribution License, which permits unrestricted use, distribution, and reproduction in any medium, provided the original author and source are credited.