Subclavian artery aneurysm is a rare peripheral aneurysm with risk of rupture and thromboembolic disease. This report describes a case of 64 years old male with an incidental left subclavian artery saccular aneurysm proximal to its origin, causing difficulty for open surgical repair. Endovascular treatment has been increasingly recognised as an alternative option. Although not commonly used outside aortic coarctation and iliac arteries, BeGraft Aortic stents were chosen off-label for treatment resulting in a complete exclusion of the aneurysm. There were no complications noted in the follow-ups 1 and 8 months.

Endovascular technique has significantly changed clinical practice of vascular surgery in the recent years. Various true and false aneurysms once treated by open surgical repair now preferred to be done by endovascular approach. Subclavian Artery Aneurysm (SAA) is a rare peripheral aneurysm estimated to occur in 1% of all peripheral aneurysms [1]. SAA is commonly cause by atherosclerosis, trauma and thoracic outlet syndrome [2]. Less frequently it can also be caused by infection, iatrogenic, aortic coarctation and congenital [3]. Surgical treatment is usually recommended due to its associated risk of rupture, compression to adjacent structure and thromboembolic disease of the upper limbs as well as carotid-vertebral vasculature [3,4].

This report presents a case of a 64 years old man who had CT imaging as part of his investigation for unexplained weight loss. He was incidentally found to have a saccular aneurysm in his left subclavian artery. He had past medical history of type 2 diabetes, peripheral vascular disease, hypertension and hypercholesterolemia. The CT scan, arterial phase 1 mm slices, demonstrated a 2.1 cm x 1.8 cm saccular aneurysm in the proximal left subclavian artery, with 0.9 cm neck with rind tissue around it. The appearance initially was also suggestive of mycotic aneurysm. However, his C-Reactive Protein level at the time was 1.4 mg/L and White Cell Count was 10.67 × 109/L, all of which pointed towards non-infection. Clinically, he had good upper limb pulses. Due to the aneurysm being close to the origin of subclavian and aortic arch (1 cm after the origin of left subclavian artery), open surgical repair was difficult. Following MDT discussion, endovascular assessment was commenced to assess its suitability for endovascular access and stenting.

MDT discussion deemed that a stent graft should be used, while commencing oral antibiotics (Flucloxacillin) for 10 days to cover for potential aneurysm infection before the procedure. Repeated CT angiogram 1 month before the procedure showed no progression in size of the aneurysm.

Subsequently, he underwent left subclavian artery stenting under local anaesthetic. Ultrasound guided puncture of the left common femoral artery was performed after 1% lidocaine infiltration to the puncture site. With Seldinger technique [5], 0.035 wires and 9 French long sheaths were inserted into the abdominal aorta and screened with fluoroscopy. Angiograms were performed in the aortic arch followed by hydrophilic 0.035 wires and selective catheterisation of the left subclavian artery. Angiography confirmed flow into the aneurysm (Figures 1-3). 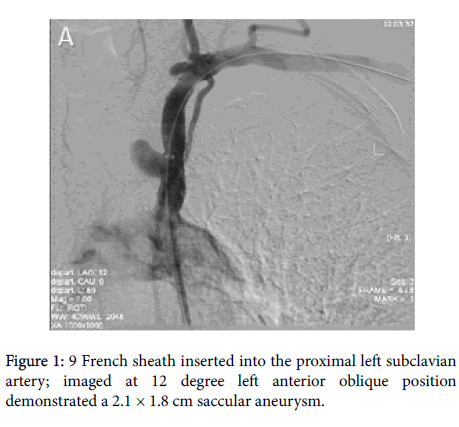 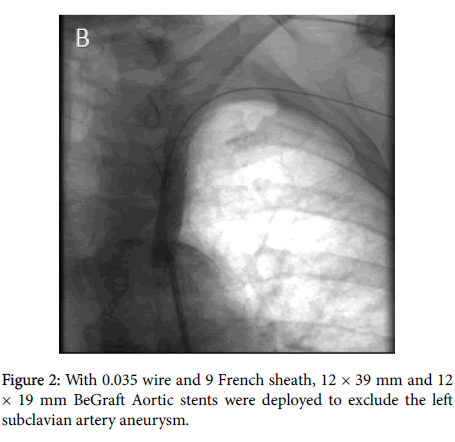 Figure 3: Full exclusion of the left subclavian artery aneurysm without compromise to its origin or branches.

Currently, there is a lack of stents available with IFU (Instruction for Use) to treat this type of aneurysm [1]. BeGraft Aortic stents (Bentley InnoMed GmbH, Hechingen, Germany), which are usually used for aortic coarctation and improving the patency of the iliac arteries, were chosen for this procedure off label. One of the main reasons is due to its low-profile delivery system as well as a high flexibility and good radial force properties [6,7]. It is a balloon-expandable Cobalt– Chromium (L605) stent with ePTFE tubing (Polytetrafluoroethylene covered stent graft). The graft is pre-mounted on the balloon with guidewire (Over-The-Wire) delivery system [7]. Although not in IFU, there has been emerging reports for its successful use to exclude subclavian artery aneurysms [8] and visceral artery aneurysms such as superior mesenteric artery and splenic artery [9]. For this patient, two BeGraft Aortic stents (12 × 39 mm and 12 × 19 mm) were deployed in satisfactory position, excluding the saccular aneurysm from circulation (Figures 2 and 3). The stent graft delivery was smooth and compliant. The stent graft deployment was easily visualised on fluoroscopy without the need for magnification. The second stent placement was also easily managed without evidence of stent ‘jump’ or migration. Following successful deployment, the puncture site haemostasis was achieved via closure device (Perclose, Abbott Laboratories).

SAA is traditionally treated by open surgical repair. Surgical access site varies depending on the aneurysm location and size. Extrathoracic aneurysm usually involves infra-clavicular or supra-clavicular incision whereas intrathoracic aneurysm usually requires thoracotomy and sternotomy for access [1-4]. These open repairs are associated with high complication rates such as recurrent ischaemic arm, laryngeal nerve injury and chylotorax [4]. Similar to several other types of aneurysm, endovascular approach to treat SAA has been emerging. The main advantage is that it acquires access through common femoral artery or brachial artery, and therefore does not require surgical incisions on the neck or chest. In a scenario when there is a difficulty to access SAA due to aortic or arterial tortuosity, both of these access sites may be cut down and a stiff wire can be inserted from one access point to the other, so called ‘through-and through technique [1]. Although there is currently limited evidence to decisively support its superiority over open repair, several literatures have supported endovascular treatment having high success rate, low recurrence rate and low complications [1,2,4].

Endovascular technique for SAA is generally performed using covered stent to exclude aneurysm. Complications often include instent thrombosis, stenosis, endoleaks, and embolisation. Endomaterial used in covered stent such as Dacron, Nitinol and PTFE (Polytetrafluoroethylene) may contribute to these complication rates [1-2]. A literature review from Maskanakis et al. [1] described selfexpanding stents used in 54.4% of the cases in which 60.5% of those were PTFE covered stent. However, no definite conclusion could be drawn on the advantages and disadvantages of each endomaterial type.

This case reports illustrates the potential use of BeGraft Aortic stents in a small saccular subclavian aneurysm with good result, where alternative operable options were not possible. Its ease of deployment and placement makes it a reasonable option for future similar cases, even though this type of stent is not commonly used outside aortic coarctation and iliac arteries [7].

Subclavian artery aneurysm is a rare peripheral artery aneurysm which carries serious risk of rupture and thromboembolic events. Although it has been traditionally treated with open surgical repair, the operation carries substantial complication rate due to its difficulty of gaining access. Similar to several other types of aneurism repair, there are increasing literatures describing endovascular approach to be effective with high success rate and lower complication. Because of its rarity, varied aneurysm dimension and limited case reports available, there is currently no specific guidance endorsing a single most appropriate type of endovascular treatment. This case report has described the use of Bentley’s BeGraft Aortic stent to be reasonable option in the treatment of small peripheral subclavian aneurysms including those involving major aortic branch vessels.

Copyright: © 2019 Suwathep P, et al. This is an open-access article distributed under the terms of the Creative Commons Attribution License, which permits unrestricted use, distribution, and reproduction in any medium, provided the original author and source are credited.