Objectives: To assess the effect of weight status and obstructive sleep apnea (OSA) severity on polysomnographic (PSG) outcomes following sleep surgery inclusive of adenotonsillectomy (AT) in children with Trisomy 21.
Methods: A retrospective chart review was completed on thirty-six children ages 1-13 years with Trisomy 21 and OSA who underwent at a tertiary care academic hospital between 2005 to 2015 and had both preoperative and postoperative PSGs. Postoperative changes in apnea hypopnea index (AHI) and other PSG parameters, including percentage of various sleep stages, were compared between children who were normal weight, overweight and obese.
Results: The mean preoperative AHIs for normal weight, overweight and obese children were 15.6, 12.2 and 15.0, respectively while the mean postoperative AHIs were 10.6, 9.4 and 10.2, respectively. Improvement in AHI was significant only among children with severe OSA (AHI >10), but not among children with mild (AHI 1.5 to 5) or moderate OSA (AHI 5 to 10), both with and without controlling for weight status (p=0.01, p=0.009). There were no significant differences in postoperative PSG parameters comparing obese vs. non-obese and overweight vs. normal weight children.
Conclusion: Weight status does not appear to affect sleep surgery outcomes in children with Trisomy 21. This subset of children was found to have persistent OSA following sleep surgery regardless of weight. Other factors associated with Trisomy 21, such as macroglossia, glossoptosis and hypotonia, may play a greater role in the pathogenesis of OSA in this patient population. Only those children with severe OSA were found to have a significant improvement in AHI after sleep surgery, inclusive of AT.

Trisomy 21 (Down’s syndrome) is a genetic disorder caused by a trisomy of all, or part of, chromosome 21 and is observed in 1 in 650 to 1000 live births in the United States [4-6]. There is a high prevalence of OSA (30-70%) among children with Trisomy 21 [7-9]. Characteristics of children with Trisomy 21 that predispose to this high prevalence include hypotonia, macroglossia, midface hypoplasia, a narrowed pharyngeal inlet and increased incidence of upper respiratory tract anomalies, such as laryngomalacia [10-13].

During the past few decades, a significant increase in the prevalence of childhood obesity has been observed in the United States [14]. Obese children are at higher risk for persistent OSA following adenotonsillectomy (AT). Children with Trisomy 21 have a higher body mass index (BMI) in comparison to the general pediatric population, which may account, in part, for the higher prevalence of OSA in this population [15-17].

The initial step in treatment of OSA among children with or without Trisomy 21 is sleep surgery, inclusive of AT. The success rate of AT is higher among children who do not have co-morbidities and are of normal weight. There is a higher incidence of persistent OSA after AT among obese children and children with Trisomy 21 [18,19]. This study was designed to evaluate the relative efficacy of sleep surgery, inclusive of AT among children with Trisomy 21 and OSA as a function of their weight status and OSA severity. Specifically, changes in polysomnographic parameters including apnea hypopnea index (AHI), percentage of sleep stages and extent of oxygen desaturation were assessed.

The retrospective chart review was approved by the Institutional Review Board (IRB) at University of Michigan Health System (UMHS). The electronic medical record was reviewed for all children aged 1-13 years with Trisomy 21 and a diagnosis of OSA based on inlab diagnostic PSG conducted between January 2005 and December 2015.

Only children who underwent AT at UMHS and had a postoperative in-lab PSG at the same institution were included in the study. Children who did not have both preoperative and postoperative PSGs were excluded.

Sleep architecture and associated events were scored by standard techniques based on the American Academy of Sleep Medicine scoring manual (AASM) for pediatric patients [20].

Repeated measures ANOVA were used to test for changes in sleep parameters over time (preoperative vs. postoperative) and to examine whether weight status or severity of OSA moderated the impact of surgery.

When the interaction term was significant, we performed subgroup analysis to examine the effect of surgery within specific groups of interest.

The median hospital length of stay was 1 day, although 1 subject had a prolonged hospitalization lasting 76 days due to aspiration pneumonia and resultant respiratory failure (Table 1). 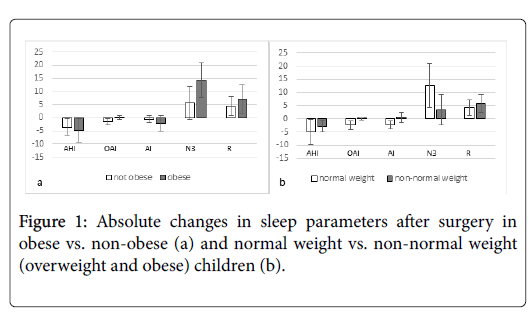 Figure 1: Absolute changes in sleep parameters after surgery in obese vs. non-obese (a) and normal weight vs. non-normal weight (overweight and obese) children (b).

Table 4: Respiratory parameter changes based on severity of OSA and weight control.

Besides weight status, there are several other potential factors that may contribute to persistent OSA following sleep surgery for children with Trisomy 21 including the presence of upper airway abnormalities such as macroglossia, midface hypoplasia, increased upper airway fat distribution and hypotonia [10,12]. Donelly et al. found that of Trisomy 21 patients with persistent OSA following AT 74% had macroglossia, 63% had glossoptosis and 30% had enlarged lingual tonsils [24]. Scott et al. proposed a mechanism to explain how pubertal changes modify determinants of OSA severity between childhood and adolescence, since BMI becomes a more important predictor of severe OSA in older children [25]. OSA severity in younger children has been linked to increased lymphoid hyperplasia, instead of parapharyngeal fat pad size. However, among children with Trisomy 21, studies have noted fatty infiltration in the muscular portion of the tongue on T1- weighted signal magnetic resonance imaging (MRI), as well as fat deposits in the lateral pharyngeal wall and uvula, similar to the fat distribution that increases the risk of OSA among adults [6,25,26]. These factors may also help explain the current study findings of no significant change in AHI and OAI following sleep surgery in both obese vs. non-obese and overweight vs. normal weight children.

Both the Muller’s maneuver (MM) and drug induced sleep endoscopy (DISE) have been utilized to help identify potential site (s) of obstruction in patients diagnosed with OSA. This information is useful in determining which procedure (s) should be recommended for each individual patient. Although there is a reasonable concordance between the results of MM and DISE for the pattern of collapse at the velum (73-92%), there is a poor concordance between the results of the two examinations at the base of the tongue (24%) [27-38]. Therefore, DISE is a potentially invaluable tool for determining the need for additional surgery directed at the base of tongue in children with Trisomy 21 and OSA [27].

The current study demonstrates that sleep surgery inclusive of AT as primary treatment for children with Trisomy 21 and OSA is, at best, partially effective. Marcus et al. has suggested using CPAP as first line management among children with OSA and complex diagnoses [3]. However, achieving high levels of CPAP compliance among children, with or without developmental disabilities, can be challenging and may make this treatment option impractical for some. Prosser et al. recently found that lingual tonsillectomy significantly improved AHI and sleep outcomes in Trisomy 21 patients with persistent OSA after AT. Only one of the 36 children in the current study underwent concurrent lingual tonsillectomy [28].

When considering surgical treatment options including AT and additional procedures such as UPPP, lingual tonsillectomy, genioglossus muscle advancement, and supraglottoplasty, one must consider that these procedures may still not address the underlying hypotonia associated with Trisomy 21. Hypoglossal nerve stimulation therapy has recently been shown to have a significant impact on upper airway patency by increasing both the retropalatal and retrolingual air space [29-31]. At present, there is only one published report on the use of hypoglossal nerve stimulation therapy in an adolescent with Trisomy 21 and OSA who had significant improvement in AHI from 48.5 to 3.4 [32].

Previous studies have reported an increase in stage N3 sleep after AT in children with OSA and Trisomy 21 [33-36]. These findings are similar to the results of the current study. An increase in the percentage of REM sleep and decrease in percentages of N1 and N2 sleep were also observed in the current study, although these changes were not found to be statistically significant.

There are several limitations to the current study. First, this was a retrospective study. The sample size is relatively small because only children who had both pre- and postoperative PSGs were included in the study, which risks inclusion bias. One possible explanation for the limited improvement in AHI found in our study is that only those with severe or clinically persistent disease underwent postoperative PSG, as patients’ families may have forgone additional testing if symptomatic improvement was achieved. In addition, PSG data was collected over a 10-year period so two different PSG scoring methods were used in accordance with the American Academy of Sleep Medicine Scoring Guidelines. Finally, children included in this study were evaluated and treated by more than Otolaryngologist, who elected to perform AT with or without additional surgery based on their clinical impression regarding the likely additional site (s) of obstruction.

Weight status does not appear to affect sleep surgery outcomes in children with Trisomy 21. This subset of children was found to have persistent OSA following sleep surgery regardless of weight. Other factors associated with Trisomy 21, such as macroglossia, glossoptosis and hypotonia, may play a greater role in the pathogenesis of OSA in this patient population. Only those children with severe OSA were found to have a significant improvement in AHI after sleep surgery, inclusive of adenotonsillecomty [37,38].

Copyright: © 2018 Zhao X, et al. This is an open-access article distributed under the terms of the Creative Commons Attribution License, which permits unrestricted use, distribution, and reproduction in any medium, provided the original author and source are credited.