The experiment was conducted in Dilla sub research station poultry farm on egg quality analysis of Koekoek dual purpose chicken with feeding newly released sweet potato variety (Hawassa-83) leaf meal because Analyzing eggs quality is so important for both consumers and for coming new chicks to evaluate the effect of dietary supplementation of three levels (0%, 3% and 6% of dietary treatments) of sun-dried sweet potato (Hawassa-83) leaf meal on performance of egg quality that collected from Wondoget woreda area in Sidama region, that multiplied for demonstration purpose to different area by Hawassa agricultural research center. Eggs collected by three different phases (beginning, mid and pic of egg production period) and as results indicated, in all phases results were not significantly different (P>0.05) across dietary treatments. But there was no any adverse effect on chickens fed meals supplemented with dried and chopped sweet potato leaf either physical or production performance. Therefore, as a sweet potato being easily accessible or affordable, it is better to supplement this leaf with costly or commercial feed inputs as proteins or calories sources

Poultry industry is a predominant source of animal protein in both developed and developing countries. The expansion of the poultry industry depends largely on the availability of good quality feed in sufficient quantity and at prices affordable to both producers and consumers. This is very important for intensive enterprise especially for layers which are very sensitive to nutrition such that inadequacies in nutrient supply often lead to fall in egg production and even cessation of lay.

With the present trend of rising prices of feed ingredients, there has been a search for non-conventional feedstuff with potentials of improving poultry performance at reduced cost. Of such non-conventional feed sources, leaf protein concentrates has been reported in many literatures including those of cassava leaf Leuceanaleucocephala, amaranthus. Among the leaves with nutritional benefits to livestock, sweat potato leaf meal has captured research interest [1-3]. Sweet potato is a perennial plant mainly grown as an annual. The roots are adventitious, mostly located within the top 25 cm of the soil. Some of the roots produce elongated starchy tubers that largely vary in shape, colour and texture depending on the variety.

Sweet potato is a herbaceous creeper plant that resists draught, has short generation interval of about four months and can therefore be planted twice a year; hence its availability throughout the year is not in doubt. The leaf of this plant has been used in the tropics as a cheap protein sources in ruminant feeds due to its high protein content. Different researchers indicated that the leaf of sweet potato contained a high protein content (26%-35%) with high amino acid and mineral profile, and vitamins A, B, C and E [4-7].

Sweet potato leaves have been used to feed Tilapia in Ugandan fish ponds and it has a crude protein 23.57% [7,8]. In Vietnam, sweet potato crop residues and other macrophytes have been tested successfully for feeding Tilapia, common carp (Cyprinus carpio), giant gouramis (Osphronemus goramy) and kissing gouramis (Helostoma temminckii) [9]. So, as the this variety (Hawassa-83) being newly released and vastly distributing (demonstrating) in our research center mandate areas, then there is need to know its’ leaf potential as chickens feed and there are only a few literatures regarding the utilization of sweet potato leaf meal (SPLM) in chickens’ diet and almost no information available in Ethiopian regarding the egg laying performances of dual purpose chicken. Therefore, this study is designed to bridge the gap with the following objectives.

• To suggest egg quality performances of breeds if nutritional requirements are maintained.

60 pullets and 12 cock three month age of Koekoek dual purpose chickens were used in this study that has been finished first growth performance experiment at Dilla poultry farm. Those experimental chickens were allowed 15 days for adaptation in new experimental design. The birds have allocated randomly to four dietary treatment groups such that each treatment had three replicates comprising 5 pullets and 1 cock per replicate and 18 chickens per treatment in a CRD design.

Then at the beginning of study chickens were tagged individually to identify their data during the experiment, weighed to differentiate their difference. At the each treatment/replication there was the egg laying nest for individual recording of egg. Also during the experiment the birds were received vaccines according to schedule.

Experimental feed formulation: The leaf part of sweat potato was used in the experiment as protein and vitamin source and it was collected from Wondogenet, root crop multiplication site. After removing the twinges, the leaves were dried under the shade to prevent the loss of vitamins and other volatile nutrients. The dried leaves then grounded using locally available materials (mortar and pestle) to produce sweat potato’s leaf meal (SPLM). Then SPLM was included in graded levels in other feed ingredients by different level supplementation of soybean to prepare the experimental diets that fed to the chickens for an experimental period of 72 weeks at Dilla sub-station (Table 1).

Chemical analysis: The sweet potato leaf meal, feeds offered and refused were analyzed for dry matter, ether extract (EE), crude fiber (CF) and total mineral (ash) by proximate analysis procedures and nitrogen free extract (NFE) was calculated by difference [10]. Protein in the feed was assessed using Kjeldahl procedure and the nitrogen in the feed was multiply by 6.25 to obtain the crude protein value. Calcium and phosphorus were analyzed by atomic absorption spectrophotometer as described by AOAC [10]. The metabolizable energy (ME) was estimated by the formula: ME (Kcal kg-1 DM)=3951+54.4EE-88.7CF-40.8Ash [11].

The egg shell was dried in air under room temperature for 48 hours after which the shell weight was taken using the 0.01 g electronic weighing balance and the shell thickness was measured with micrometer screw Guage (Skoler) to the nearest 0.01 mm. Other performance characteristics computed were; 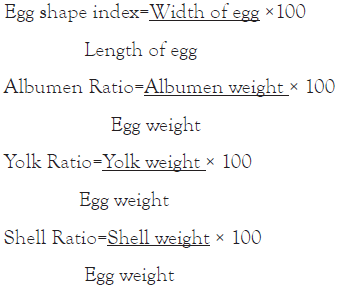 Inferential statistics of growth and egg production data were carried out in the SAS package (SAS 2001) using all available records [12]. Parameter estimates for both growth and egg traits were obtained by univariate animal model using ASREML [13].

Where, Yik=individual values of the dependent variables;

μ=overall mean of the response variable;

eik=error associated with the experimental study.

As indicated Table 2 below, in all egg quality parameters, chickens fed sweat potato (Hawassa-83) meal were non-significant across dietary treatments except shell thickness. Which might be the nutrient content of sweat potato specially vitamins almost similar with soy bean. Even though the results showed non-significance difference among the treatments, sweat potato (Hawassa-83) has competing effects with Soybean in maintaining egg quality parameters. This was indicated by shell thickness parameter, means chickens fed potato supplemented feed at dietary treatments two and three showed significant difference (p<0.05) than the treatment one. This is consistent with the work done by Singh et.al that eggshell thickness increased due the addition of Xylam to the diets containing 5 or 7% ALM compared to control and 2% ALM diet [14]. But the current results are inconsistent with the findings of Mouräo et al. and Khajali et al. who reported that addition of alfalfa and enzyme to laying hens diet had no effect on eggshell thickness [15,16]. In addition to that, sweat potato (Hawassa-83) didn’t have any negative effects on birds’ well fair during the experiment.

As shown in the tables three and four below, all egg quality measuring parameters were not significantly different(p>0.05) across dietary treatments during the second and third round of production phase/stage of chicken. Which was different only shell thickness parameters from the first round stage that showed significant difference (p<0.05) across the treatments. However, there was no any significances among treatments, there was numerically increasing in all parameters from treatment one to three. That showed sweat potato (Hawassa 83) leaf meal had positive effects on production and productivity of dual purpose koekoek chicken with their egg quality when supplemented with soybean meal. Current results were agreed with the findings of Yu-xin et al., Güçlü et al. and Khajali et al., who reported that addition of alfalfa meal (10%, 7%and 9%, respectively) to laying hens diet had no significant effect on feed intake, egg production and feed conversion ratio [16- 18]. Also this result was agreed with Sobamiwa, who did not record any significant difference in the cumulative egg quality when sweet potato was incorporated up to 20% in layers diets and Shoremi and Job who found no difference in similar birds used for sweet potato trial [19,20]. However, in current study observed figuratively there was increasing trend of quality when increasing the level of sweat potato leaf meal in the diet as discussed earlier (Tables 3 and 4). As a cost and accessibility side, sweat potato was better than the soybean meal.

The supplementation of roasted and grounded soybean seed with sweet potato (Hawassa-83) leaf meal up to 6% in the diet of laying chickens had no negative impacts on performance and prominent results were obtained up to the inclusion rate of 6% as evidenced by improved feed intake, egg weight, shell weight, shell thickness, yolk weight, albumen weight, egg length, egg diameter, egg shape index, albumen ratio and yolk ratio.

The general improvement in the performance of chickens together with their physical appearance provides sights to conclude that SPLM have supplied better health and nutritional benefits. Thus, the inclusion of sweet potato leaf meal up to 6% in laying diet could be an alternative feeding strategy for supplementing other expensive protein sources such as soybean seed in urban and perurban chicken production practices which assists to enhance their income through increased productivity, quality and improved nutritional status of birds.

Copyright: © 2021 Bekele B, et al. This is an open-access article distributed under the terms of the Creative Commons Attribution License, which permits unrestricted use, distribution, and reproduction in any medium, provided the original author and source are credited.