Background and objectives: The Vaso-occlusive Crisis (VOC) is a very common manifestation of Sickle Cell Disease patients in India which is characterised by severe body, chest and joint pain. The patho-physiology of VOC is due to abnormal nitric oxide dependent regulation of vascular tone, adhesion of sickle cells (deoxygenated) to endothelium, platelet activation and inflammation. Therefore, nitric oxide inhalation may relieve such condition and also pain. Method: Twenty patients of SCD (Sickle Cell Disease) aged 10 years and above with acute pain admitted to Emergency Department of Apollo Hospitals, Bhubaneswar were given ‘NO’ inhalation for 6 hrs at 80 ppm. Pain was measured by Visual Analog Scale (VAS) initially and at hourly interval for 6 hrs. Results: Out of 20 cases of SCD, 18 patients responded to ‘NO’ inhalation and there was significant reduction in pain score compared to initial values. NO alteration in vital parameters like B.P., Pulse, Respiration seen and no rise in Methemoglobin level occurred during therapy. Interpretation and Conclusion: The Nitric oxide inhalation therapy in sickle cell VOC cases is effective and also safe. It controls the acute pain significantly. However, since it is a small study, multicentric trial in large number of patients is suggested.

The clinical manifestations of Sickle Cell Disease in India are milder as compared to that of African and Americans and Caribean patients [1]. The main problem of Indian sicklers is acute pain crisis due to Vaso-occlusion [1-3]. The Vaso-occlusive crisis is a common painful complication of sickle cell disease in adolescents and adults. Acute episodes of severe pain are the primary reason that these patients seek medical care in hospital emergency departments. Frequently however the pain is incompletely treated. NO is a soluble gas with half-life of few seconds. It is continuously synthesized in endothelial cells from the amino acid L-arginine by isoforms of the NO synthase enzyme. NO released from the endothelium activates soluble guanyl cyclase in smooth muscle after binding to its home group, resulting in increased intracellular cyclic GMP [4]. Cyclic GMP activates CGMP-dependant kinases that decrease intracellular calcium conc in smooth muscle, producing relaxation, vasodilation and increased regional blood flow. In addition, NO induces a coordinated program of cellular events that promote blood flow; primarily by suppressing platelet aggregation, expression of cell adhesion molecules on endothelial cells and secretion of procoagulant proteins [5-8]. The vaso-occlusion is initiated and sustained by interactions among sickle cells, endothelial cells and plasma constituents [9]. Acute pain in this crisis is caused by ischaemic tissue injury resulting from the occlusion of micro vascular beds by sickled erythrocytes. The severe pain is caused by increased intra-medullary pressure, especially within the juxta articular areas of long bones, secondary to an acute inflammatory response to vascular necrosis of the bone marrow by sickled erythrocytes [10]. In recent years there has been much interest in understanding the possible pathophysiological and therapeutic roles of nitric oxide in SCD [11]. Nitric oxide is the critical effector of endothelial dependent vasodilation and also exerts pleiotropic effects on vascular and circulating blood cells.

Therefore, the present work was designed to explore the safety and efficacy of nitric oxide inhalation for treatment of acute painful crisis of sickle cell disease in adult and adolescent cases admitted to Apollo Hospitals, Bhubaneswar.

This present study is a prospective one in 20 cases of sickle cell Vaso-occlusive crisis (VOC) patients admitted to Emergency Services of Apollo Hospitals, Bhubaneswar from May 2012 to July 2013, the total period of trial being fourteen months. The permission of Institutional Ethics Committee (IEC) of the Hospital was obtained prior to conduction of this project.

Plan of the Study

20 patients 10 yrs of age or older with sickle cell Disease (SS, S β thal) were included who had acute pain and came to the Emergency services. The patients were initially screened for Hemogram, LFT, Hb-HPLC, Methemoglobin, Chest X-ray.

The patients breathed Nitric Oxide gas at a concentration of 80 ppm for 6 hrs with a mask using a continuous flow delivery system using SLE 3600 INOSYS. Nitrogen dioxide (NO2) level was monitored in the above system and maintained below 1.0 ppm. Inhaled NO Concentration remained constant at extremes of minute ventilation. The mask was allowed to take off for 10 to 15 minutes maximum for taking some food. Written informed consent was obtained from all participants and in case of younger patients less than 18 years parents consent was also taken.

Pain associated with VOC was measured on a scale of 0 to 10 using visual analog scale (VAS) [12], “which considered of a 10 cm horizontal line”, with the ends representing the extreme limits of “no pain” (O) and worst pain (10). The participant was asked to make a mark along the line to indicate the intensity of pain at baseline and at hourly interval after the start of the gas inhalation. Each participant’s score was the measurement in centimeters from the mark, to the nearest 0.1 cm. Continuous Blood pressure by Cuff, pulse oximetry, respiratory rate, temperature and heart rate and rhythm were recorded. Demographic, clinical and laboratory variables were collected by the co-ordinator in a printed form.

Pain relief was measured by VAS pain score of 4 or less, ability to walk.

The primary efficacy variable was the time to VOC pain reduction (VAS scores ≤6 cm), ability to walk and agreement of the physician, patient and parent or guardian that residual pain was low enough to be managed at home.

Following are the inclusion and exclusion criteria:

•Patient had diagnosis of SCD (Known SS, S-βthal and other hemoglobinopathies like S-E or SD).

•Greater than or equal to 10 years old

Subjects meeting any of the following criteria during baseline evaluation were excluded from entry into the study:

•Pregnant women, nursing mothers •Patients who have received an exchange transfusion in the last 30 days The hemogram (complete Blood Count) was done by Automatic hematology cell counter using Sysmex (2000i) and the peripheral smear examination was undertaken by one hematologist and biochemical parameters were performed by using Auto analyzer (Beckman Coulter AU480, Japan). The methemoglobin level was estimated by spectrophotometer (Shimadzu, Japan) following the method recommended [13].

Twenty patients of SCD (17 sickle homozygous and 3 Sickle-β Thal) were included based on the eligibility criteria age varying from 13 to 57 admitted to Emergency Department of Apollo Hospitals, Bhubaneswar. Most episodes occurred during late monsoon season between July to October.

The demographic and clinical data are shown in Table 1. The laboratory parameters are shown in Table 2. There were no significant changes observed in hemoglobin concentration, hematocrit, platelet count, WBC count or MCV after ‘NO’ delivery at 80 ppm for 4-6 hrs.

Table 1: Demographic and clinical data of SCD cases with VOC.

Table 2: Hematological and Biochemical Parameters in cases of SCD with VOC.

The mean (±SD) VAS score initially and at hourly interval have been shown in Figure 1. It is interesting to note that by 4 hrs there is a significant reduction in pain score in majority of cases. In 2 patients the pain score did not show any change (Figure 2). One of them was having pain in upper limb due to venous thrombosis of the superficial vein of left hand. The other one was having a vascular necrosis of left hip joint. It is observed that there is no change in methemoglobin level (<5%) and also vital parameters during the therapy. Two patients in the present series needed consecutive 2 days treatment with nitric oxide inhalation because of recurrence of pain. 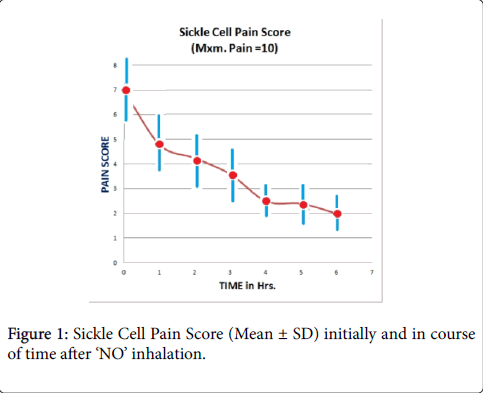 Figure 1: Sickle Cell Pain Score (Mean ± SD) initially and in course of time after ‘NO’ inhalation. 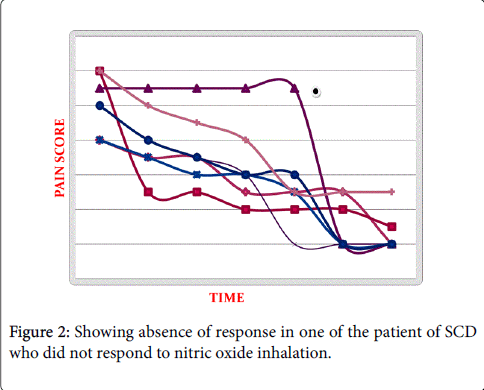 Figure 2: Showing absence of response in one of the patient of SCD who did not respond to nitric oxide inhalation.

There was no observed effect of ‘NO’ inhalation on vital signs, ECG, PaO2, Pa Co2, or oxygen saturation.

Treatment of acute painful crisis of sickle cell disease remains a challenge in the management of SCD patients. It is also equally important to recognize a pain crisis early, correct the inciting causes, control pain and prevent further complications [14]. There is no protocol yet for management of pain crisis in SCD in spite of advancement in pain management. The physicians and hematologists hesitate to use narcotic drugs for the obvious reason of addiction, tolerance and side effects [15,16]. In most patients, a pain crisis resolves within five to seven days [17].

According to US Department of Health and Human Services guidelines on the management of SCD, self-reporting of pain is the most reliable indicator of the presence and intensity of pain [18]. The VAS is an easy to use, reliable pain assessment tool in patients older than 5 years [19] and has been intensely validated in patients with SCD [20].

This present study is the first report on nitric oxide inhalation efficacy and safety in sickle cell acute pain crisis in Indian patients having Arab-Indian haplotype. Similar study has been done in the past in American patients [21,22]. The observation is limited to acute pain only. The magnitude of change in VAS pain scores observed in this study was similar to that of earlier report [22].

It also aims at gathering information regarding the safety of NO therapy in acute VOC in SCD. There were no episodes of hypotension, clinically significant decrease in sp02 or significant increase in methemoglobin level (<5%) indicating there by that nitric oxide inhalation for 6 to 8 hrs is safe.

Thus our data suggest that inhaled NO at 80 ppm for 6 to 8 hrs is well tolerated. Without any toxicity or side effect as evidenced by no significant rise in methemoglobin level in blood and also unchanged laboratory parameters.

Oxygen therapy is often used in the management of VOC, despite lack of evidence supporting the effectiveness of these measures in all patients [23,24]. Oxygen may also suppress erythrocyte production, depress reticulocytosis and cause rebound sickle cell crisis on discontinuation of therapy when arterial oxygen tension is raised above the normal range [25]. Nitric oxide inhalation has been reported to increase the oxygen affinity of sickle erythrocytes. Also, inhaled NO reacts with hemoglobin in SS and AA individuals, resulting in significant increases in NOX compounds and mild elevations in methemoglobin. The level of nitrosylation may provide a mechanism to augment NO delivery to the microvasculature and possibly improve micro vascular perfusion [26].

However, a multicenter, randomized controlled phase 2 trial from USA reported that inhaled nitric oxide gas had no effect on the time to VOC resolution or any of the planned secondary analyses, including length of hospitalization, change in VAS score and total opioid use.21 But, in the same study the fact that patients in INO (Nitric oxide inhalation) group used less narcotics than those in the placebo group may suggest a clinically significant effect of iNO. There was a modest but not statistically significant trend toward shorter hospitalization in patients with iNO group. It is observed that they have given NO gas 80 ppm for 4 hrs only where as ours is 6 hrs.

In addition, we feel that this difference may be due to several other factors like genotype of sickle cell disease cases, the amount of nitric oxide deficiency in individual patients, the amount of Hb F in the patients etc. It is well known that cases of sickle cell anaemia homozygous patients do have nitric oxide deficiency due to intravascular hemolysis which lowers the level of nitric oxide [27]. Beneficial effect of Nitric oxide inhalation in Acute chest syndrome of SCA cases has also been reported [28]. The mechanism proposed is dilation of pulmonary vascular bed reducing after load on the right ventricle, redistributing pulmonary blood flow to better ventilated areas of lung and potentially reducing sickling in the lung. Inhibition of platelet aggregation has been suggested as an additional beneficial effect of nitric oxide in respiratory failure.

Thus it can be concluded that inhaled ‘NO’ as potent vasodilator, may play a critical role in the treatment of VOC of Sickle Cell Disease and provide effective therapy for these patients avoiding the use of narcotic drugs.

Copyright: © 2015 Mohanty D, et al. This is an open-access article distributed under the terms of the Creative Commons Attribution License, which permits unrestricted use, distribution, and reproduction in any medium, provided the original author and source are credited.