Aqueous, ethanol and acetone leaf extracts of the four medicinally important plants Vetiveria zizanoides, Asparagus racemosus, Hyptis sauveolens and Citrus limon was used to demonstrate their toxic effects on the blood sugar trehalose of the stored insect pest Callosobruchus chinensis. The plant leaves caused significant changes on the amount of trehalose and the effect was dose-dependent. Trehalose was found to be decreased compared to control insects. Acetone extract of Citrus limon at sub-lethal dose (1.6%) could produce significant effects compared to aqueous and ethanol extracts indicating the presence of more active components in it. The medicinal plants thus proved to have strong insecticidal activity against the insect pests.

The disaccharide trehalose is the main blood sugar [1-6]. Trehalose is a non-reducing disaccharide also known as mycose or tremalose comprising two glucose molecules. It is synthesized and released into haemolymph by the fat body, the central organ of intermediary metabolism in insects. It has been shown that trehalose can protect proteins and cellular membranes from inactivation or denaturation caused by a variety of stress conditions, including desiccation, dehydration, heat, cold, and oxidation. Trehalose served as a storehouse of glucose for energy and or for synthesis of cellular components [7]. The fact that trehalose is so resistant to acid hydrolysis may be key to understanding the use of trehalose in insect blood or hemolymph. Glycogen is mobilized for use by other tissues, mostly in the form of trehalose.

The secretion of trehalose by adipocytes involves a membrane transporter. The identification and characterization of the first insect trehalose transporter has been recently reported [8,9]. Apart from the use of trehalose for maintenance of energy metabolism during fasting or non-feeding periods [10], it acts as a substrate for insect flight in general. Long-term flyers, such as locusts [11] and mosquitoes, subjected to several hours of flight [12] start flying using trehalose and after some time switch to lipids. Short-term flyers such as the cockroach Periplaneta americana [13] use mostly trehalose.

The relation between trehalose and insects was ignored until the substance was rediscovered in insects in the mid-fifties [14] and its metabolism was extensively studied in the following years. The reaction involved in the synthesis and degradation of trehalose in insects are now well understood. However, despite much effort over almost forty years, it is still poorly understood how these processes are regulated. Trehalose is present in all insects (at least in the adults) studied in this respect, and in many insects it is present in high concentrations and constitutes the major haemolymph (blood) sugar and can be stored in relatively high concentration in body fluids [15,16].

The present study investigates the changes in the trehalose content in adult Callosobruchus chinensis when treated with the plant leaf extracts of Vetiveria zizanoides, Asparagus racemosus, Hyptis sauveolens and Citrus limon.

Experiments were conducted in the Entomology Research Laboratory, Department of Zoology, University College Thiruvananthapuram. The pulse beetle, Callosobruchus chinensis L. adults were obtained from naturally infested green gram seeds from local markets. The adult male and female beetles were reared on clean and un-infested green gram (Vigna radiata L). The seeds were made pesticide free by washing with clean water. The adult insects separated from the initial stock were introduced into the fresh green gram. The culture was maintained in the laboratory in plastic containers at room temperature (± 28°C). The cultures were cleaned every day to avoid contamination. Newly emerged adults were used for the study.

Plants used for the study

50 grams of powdered leaves of each plant were weighed and dissolved separately in 100 ml distilled water and kept for 24 hours. After 24 hours the mixture was heated at low heat for 2-3 hours continuously in a hot plate. While boiling the solution was mixed thoroughly with a glass rod at regular intervals to prevent overflow. After boiling the mixture was filtered through what’s Mann No. 1 filter paper. The supernatant was collected and centrifuged for 10 minutes at 2000 rpm. The concentration of prepared extract was considered as 100%. Finally, it was stored in air tight glass containers under refrigeration.

Ethanol extract was prepared using Soxhlet apparatus. 50 grams of each leaf powder were weighed and tied in a thin cloth and placed in the extraction tube. 500 ml ethanol was taken in the glass flask. Ethanol was boiled at 55°C continuously. Boiling was continued for six to eight hours till the extract became pale green. After the extraction is over the extract is allowed to cool, and stored in air tight containers for further use under refrigerated condition. The ethanol extract obtained was treated as 100% concentration.

Acetone extracts were prepared according to the method of [17-20] with modifications. Twenty grams of ground leaves of Vetiveria, Asparagus, Hyptis and Citrus were separately mixed with 200 ml acetone and stirred for 30 minutes using a magnetic stirrer and then left to stand for 24 hours. The mixture was then filtered through Whatmann No.1 filter paper and the solids were stirred again for 15 minutes with 50 ml of acetone and filtered and the filtrates were combined. The solvent from the pooled filtered solution was evaporated in a water bath at 65°C. After complete evaporation of solvents, the final cooled extracts were weighed and preserved in sealed bottles in a refrigerator at 5°C until used for insect bioassays.

The effect of aqueous, ethanol and acetone extracts were analyzed by using residual film method. No.1 What man filter paper were cut in round shape and placed in the plastic containers. Plant leaf aqueous, ethanol and acetone extracts at sub-lethal concentrations (2.4%, 2.2% and 1.6%) were applied to these filter papers separately using a micropipette and allowed to dry so that the solvent may evaporate completely. Ten one day old adult insects were placed in each of the containers along with twenty grams of feed (green gram seed) so that each adult would get about two grams of feed. The feed was weighed out using a weighing balance Control was also prepared for each experiment by adding solvent (distilled water, ethanol and acetone) alone instead of leaf extracts. Six replicates were kept for each treatment and its control.

After three days of treatment, adult insects were separated from the treated culture and homogenated in phosphate buffer. The homogenate was centrifuged at 6000 rpm for 10 minutes. Supernatant obtained was used for the estimation of trehalose.

The data obtained were recorded as mean ± standard deviation. For testing the significance of the data obtained, statistical analysis were carried out using ANOVA (p ≤ 0.05) using SPSS software.

Results from the Tables (Tables 1-3) showed that the trehalose content of the treated adults was decreased compared to control insects. Each extract and all the doses tested showed significant differences in the amount of trehalose (Figures 1-3). 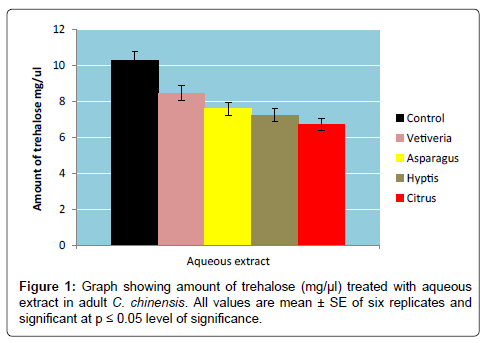 Figure 1: Graph showing amount of trehalose (mg/μl) treated with aqueous extract in adult C. chinensis. All values are mean ± SE of six replicates and significant at p ≤ 0.05 level of significance. 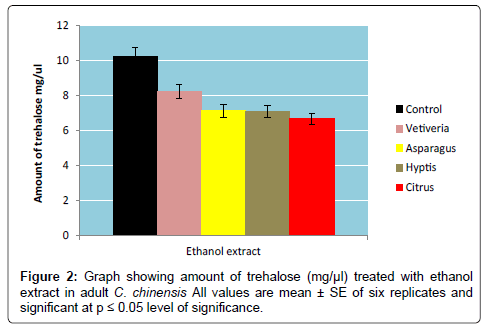 Figure 2: Graph showing amount of trehalose (mg/μl) treated with ethanol extract in adult C. chinensis All values are mean ± SE of six replicates and significant at p ≤ 0.05 level of significance. 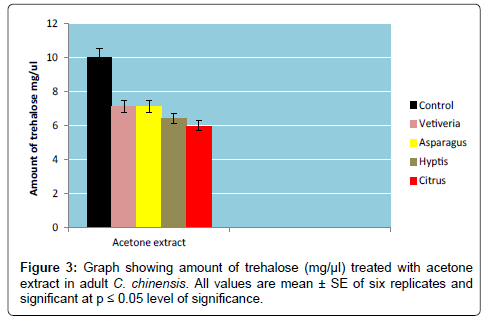 Figure 3: Graph showing amount of trehalose (mg/μl) treated with acetone extract in adult C. chinensis. All values are mean ± SE of six replicates and significant at p ≤ 0.05 level of significance.

It has been observed that the trehalose content had been reduced in all the treatments when compared to the control. This may be due to the stress condition that occurred in the insects during the treatment.

In most insects, carbohydrates reserves are present as glycogen and trehalose and both the reserves can be ready converted into glucose for the support of all life processes. Metamorphic changes in insect are usually accompanied by substantial depletion of their carbohydrate reserves. During this period, glycogen and treholase supply glucose which provides an energy source and a substrate for the synthesis of pupal and adult tissues, especially the cuticle. In addition to this, the stress condition that occurred in the insects during the adverse condition causes a drastic reduction in the amount of trehalose. In this experiment, the changes are probably due to the treatment with plant extracts. The obtained results show that the activity of trehalose was affected in treatments and was lower than that obtained with untreated insects. Change in trehalose indicates the role of plant extracts in altering the physiological balance in insects.

Kurita et al. noticed depletion of trehalose in Lohita grandis due to the action of various hormones. Bouayad noticed enhanced activity of hydrolytic enzymes and decreased amount of trehalose in Plodia interpunctella on treatment with Moroccan plant extracts [16]. Hatem Mohamed Al-shannaf et al. reported the effect of some bio insecticides and Igrs on American Bollworm, Helicoverpa armigera and noticed a drastic increase in the activity of the enzyme trehalose and reduced amount of trehalose [19].

Copyright: © 2017 Ganga S, et al. This is an open-access article distributed under the terms of the Creative Commons Attribution License, which permits unrestricteduse, distribution, and reproduction in any medium, provided the original author and source are credited.
Top