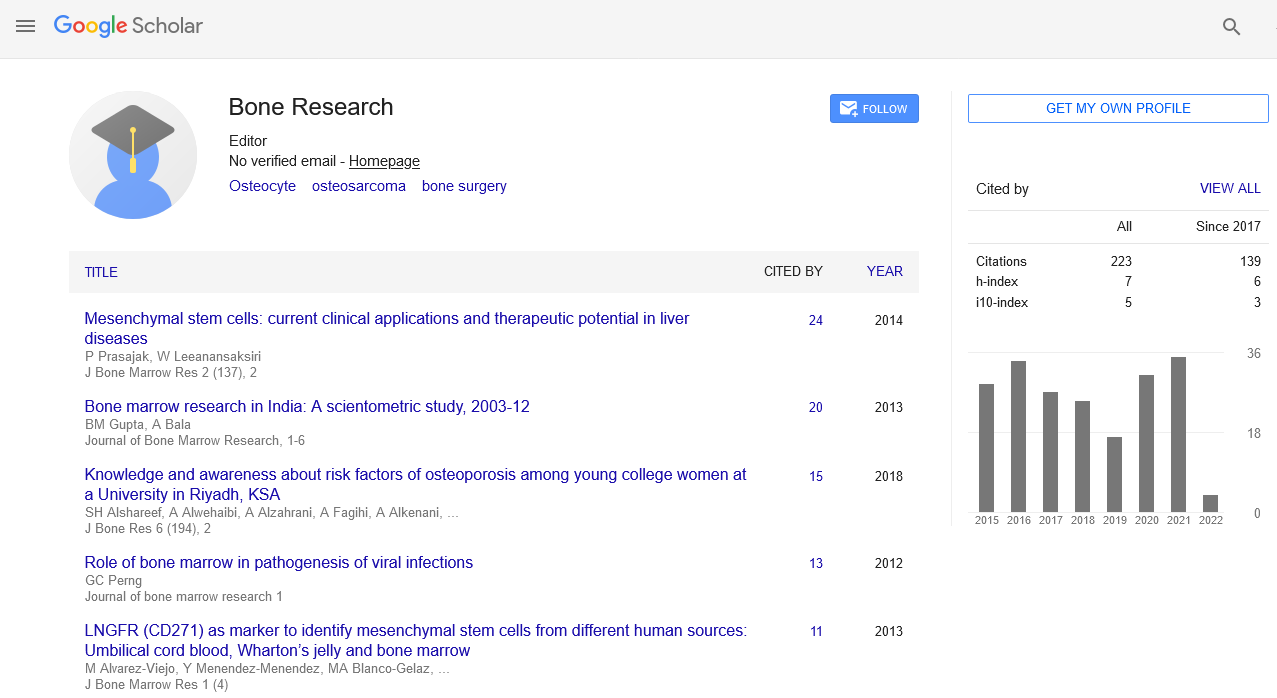 Background: Human mesenchymal stem cells (hMSCs) hold promise for use in cell-based therapies and tissue engineering. Although hMSCs are thought to be stable ex vivo, it is possible that they undergo an undesirable transformation to a phenotype of unlimited proliferation during ex vivo. In this study, we searched for the factor required for unlimited proliferation of hMSCs. Methods: Changes in gene expression were evaluated between hMSCs and Ewing’s sarcoma cell lines, which may be derived from hMSCs, using GeneChip Human Genome U133 plus 2.0 Array. A gene up-regulated by at least 10-fold in Ewing’s sarcoma cell lines, Cyclin D2, was overexpressed in hMSCs by a lentiviral vector. Results: Overexpression of Cyclin D2 in hMSCs altered cell morphology and promoted cell proliferation. Expression of transforming growth factor-b2 (TGF-b2), which induces senescence in hMSCs, was down-regulated in Cyclin D2- overexpressing hMSCs. Furthermore, Gene Ontology analysis revealed that Cyclin D2 overexpression activated expression of genes associated with proliferation and interphase. Conclusions: Cyclin D2 promotes hMSC proliferation and is a candidate biomaker for hMSC transformation.

Mesenchymal stem cells (MSCs) self-replicate and differentiate into a variety of cell types such as osteoblasts, chondrocytes, adipocytes, and smooth muscle cells [1-5]. These capacities have made MSCs useful in studies of bone and cartilage regeneration [6-8]. One of the sources of human MSCs (hMSCs) is adult bone marrow, although they occur at a rate of one per one-hundred-thousand nucleated cells [6], and the available volume of bone marrow is limited. To secure the numbers of hMSCs required for tissue regeneration, the cell must be expanded ex vivo. Although hMSCs are stable ex vivo, it is possible that they undergo transformation to an unlimited proliferation phenotype during expansion.

Previous studies have demonstrated that Ewing’s sarcoma is derived from MSCs [9-12]. Ewing’s sarcoma is a malignancy that primarily affects children and young adults, with a peak incidence between the ages of 14 and 20 years. It arises mainly in bone and less commonly in soft tissues. The t(11;22)(q24;q12) chromosomal translocation generating EWS-FLI-1 fusion gene is found in 85% of cases [13]. EWS-FLI-1 knockdown inhibits cell proliferation in Ewing’s sarcoma cells [14,15]. Thus, EWS-FLI-1 expression is believed to play a key role in Ewing’s sarcoma development. However, EWS-FLI-1 expression does not transform normal murine and human fibroblasts [16,17], suggesting EWS-FLI-1 promotes malignant transformation in selective cells.

Several reports have demonstrated that EWS-FLI-1 expression transforms murine MSCs; indeed, tumors form when these cells are injected into immunodeficient mice [9,12]. In contrast, EWSFLI- 1 expression in hMSCs does not accelerate cell proliferation and transformation (10). EWS-FLI-1 expression in hMSCs induces a gene expression profile that closely mimics that of Ewing’s sarcoma [9-11] without affecting proliferation. Therefore, MSCs are thought to be the origin of Ewing’s sarcoma, but because EWS-FLI-1 alone cannot transform hMSCs, we believe other factors are required for transformation.

The most important safety concern when using hMSCs in cell- based therapies and tissue engineering is the occurrence of unlimited proliferation during ex vivo culture. To identify the factors required for unlimited hMSC proliferation, we compared the gene expression profiles of hMSCs and Ewing’s sarcoma cell lines and found that Cyclin D2 expression was extremely high in the Ewing’s sarcoma cell lines. Overexpression of Cyclin D2 promotes proliferation of hMSCs, suggesting that Cyclin D2 is a candidate biomaker for hMSC transformation.

Total RNA was extracted from hMSCs and Ewing’s sarcoma cell lines with the RNeasy Mini Kit (QIAGEN, Valencia, CA). Total RNA quantity and quality were assessed on an Agilent 2100 Bio-analyzer (Agilent, Santa Clara, CA); 100 ng total RNA was used to generate biotin-modified amplified RNA (aRNA) with GeneChip 3′IVT Express Kit (Affymetrix, Santa Clara, CA). Reverse transcription (RT) of firststrand complementary DNA (cDNA) with the T7 promoter sequence was performed with the T7 oligi(dT) primer. Second-strand cDNA synthesis was used to convert the single-stranded cDNA into a doublestranded DNA template by using DNA polymerase and RNase H to simultaneously degrade the RNA and synthesize second-strand cDNA. In vitro transcription of biotin-modified aRNA with IVT Labeling Master Mix generated multiple copies of biotin-modified aRNA from the double-stranded cDNA templates. The aRNA was purified and quantified; after fragmentation, it was hybridized to GeneChip Human Genome U133 Plus 2.0 Array (Affymetrix). The arrays were stained with phycoerythrin and washed at the GeneChip Fluidics station 450 (Affymetrix). The microarrays were scanned and data extracted using GeneChip scanner 3000 7G (Affymetrix); image analysis was performed using the Affymetrix GeneChip Command Console Software and digitized with the Affymetrix Expression Console.

Cloning and expression of Cyclin D2

Cyclin D2 cDNA was amplified by RT-PCR of mRNA extracted from SK-ES-1 using 5´-GAATTCGCCACCATGGAGCTGCTGTGCCACGAGG-3´ (forward; EcoR I site underlined) and 5´-CTCGAGTCACAGGTCGATATCCCGCACG-3´ (reverse; Xho I site underlined).The amplified products were cloned into pTA2 (ToYoBo, Osaka, Japan) and verified by sequencing. The verified Cyclin D2 cDNA was cloned into the EcoR I and Xho I sites of pLVSIN-CMV Pur (TaKaRa, Shiga, Japan). Lentiviral vector was prepared with the Lenti-XTM Packaging System (TaKaRa) according to manufacturer protocols.

hMSCs were infected with the lentiviral vector containing Cyclin D2 (hMSCs/CyclinD2) or empty vector (hMSCs/Empty) at 37°C for 24 h. Infected cells were selected with 1 mg/mL puromycin for 14 days and the bulk of the resistant cells was used in subsequent experiments.

Proliferation of hMSCs/CyclinD2 and hMSCs/Empty was measured with the TetraColor ONE reagent (Seikagaku Co., Tokyo, Japan). Cultures were incubated for 2 h in medium containing the reagent. Absorbance was read at 450 nm (reference at 600 nm) on a plate reader (SH-9000, Corona Electric Co., Ibaraki, Japan). 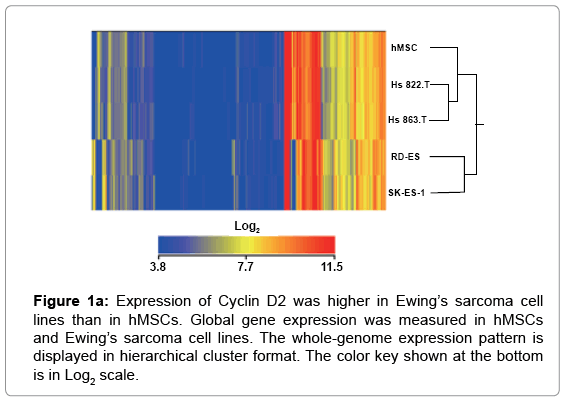 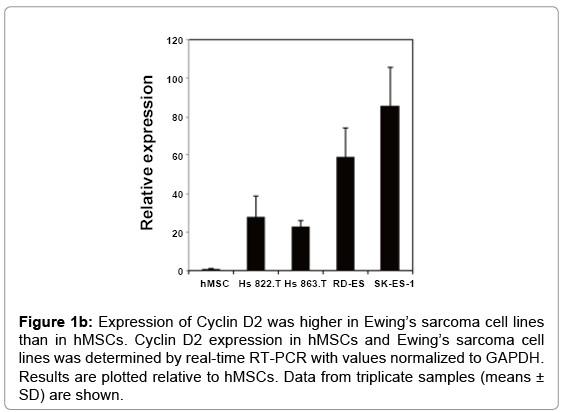 We transduced the Cyclin D2 gene into hMSCs by using a lentiviral vector; an empty vector served as a negative control. At 14 days after infection when puromycin selection was completed, Cyclin D2 mRNA expression in hMSCs infected with lentiviral vector containing Cyclin D2 (hMSCs/CyclinD2) was about 10,000-fold higher than in hMSCs infected with empty vector (hMSCs/Empty) (Figure 2a). Cyclin D2 was stably expressed in hMSCs at least 56 days after infection (Figure 2b). Next, we observed the cell morphology of the hMSCs/CyclinD2. Phase contrast microscopy revealed the normal fibroblast-like morphology of hMSCs/Empty (Figure 2c) and smaller spread areas in hMSCs/ CyclinD2 (Figures 2c and 2d). Furthermore, proliferation of hMSCs/ CyclinD2 was faster than that of hMSCs/Empty, indicating that overexpression of Cyclin D2 promoted hMSC proliferation. However, the proliferation slowed over time and did not result in unlimited proliferation (data not shown). 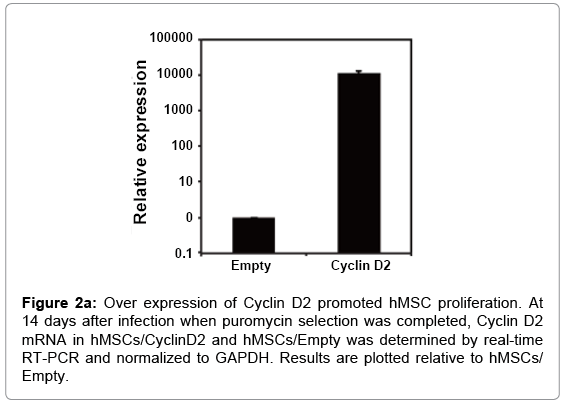 Figure 2a: Over expression of Cyclin D2 promoted hMSC proliferation. At 14 days after infection when puromycin selection was completed, Cyclin D2 mRNA in hMSCs/CyclinD2 and hMSCs/Empty was determined by real-time RT-PCR and normalized to GAPDH. Results are plotted relative to hMSCs/ Empty.

Figure 2b: Overexpression of Cyclin D2 promoted hMSC proliferation. Cyclin D2 protein expression was visualized by western blotting at the indicated days after infection. Equal amounts of protein were loaded in each lane. 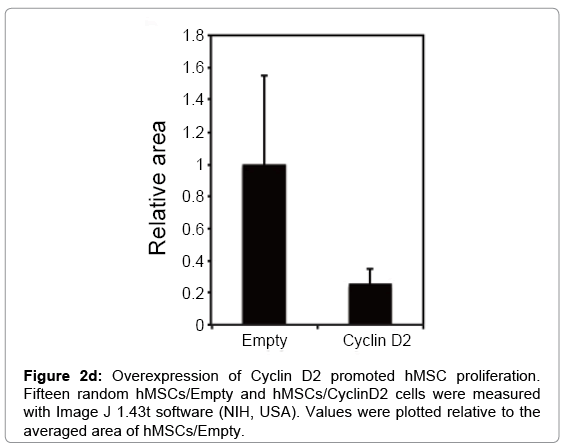 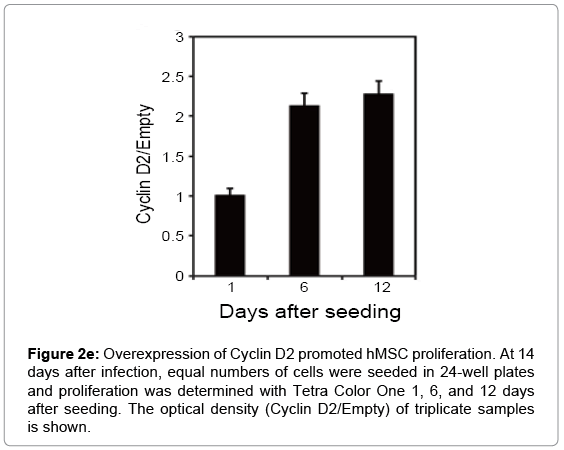 Figure 2e: Overexpression of Cyclin D2 promoted hMSC proliferation. At 14 days after infection, equal numbers of cells were seeded in 24-well plates and proliferation was determined with Tetra Color One 1, 6, and 12 days after seeding. The optical density (Cyclin D2/Empty) of triplicate samples is shown. 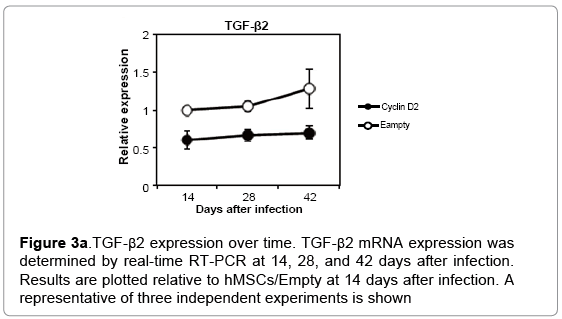 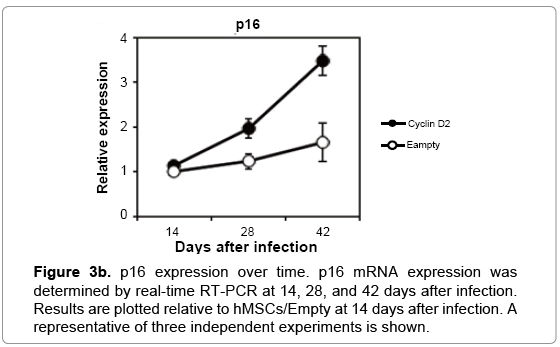 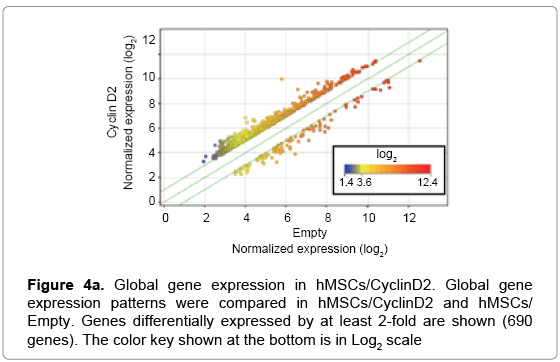 Table 3: ‘Proliferation of cells’ genes differentially expressed by at least 2-fold between hMSCs/CyclinD2 and hMSCs/Empty.

Table 4: ‘Interphase’ genes differentially expressed by at least 2-fold between hMSCs/CyclinD2 and hMSCs/Empty

Cyclin D2 is a member of the family of D-type cyclins that mediate cell cycle regulation, differentiation, and oncogenic transformation [22,23]. D-type cyclins inactivate retinoblastoma (Rb) by phosphorylation, inducing release of E2F. Free E2F activates genes involved in the activation and maintenance of DNA synthesis. Thus, overexpression of Cyclin D2 generally has growth-promoting effects. Consistent with this notion, overexpression of Cyclin D2 in HeLa cells, in which Rb is inactivated by human papillomavirus E6 and E7 proteins [24], did not promote cell proliferation (data not shown). On the other hand, increased expression of Cyclin D2 inhibits proliferation of primary human fibroblasts [25], indicating that Cyclin D2 has both positive and negative roles in the cell cycle, depending on cell type. We found that Cyclin D2 in hMSCs has a positive role in the cell cycle (Figure 2e).

TGF-b2 expression was suppressed in hMSCs/CyclinD2 compared with hMSC/Empty during culture (Figure 3a). We previously demonstrated that hMSC growth is reduced and TGF-b2 expression increases during long-term culture [26]. We also reported that fibroblast growth factor-2 (FGF-2) stimulates hMSC growth by suppressing the up-regulation of TGF-b2 [27]. It is unclear how overexpression of Cyclin D2 suppresses the TGF-b2 increase, but this suppression may be involved in the acceleration of hMSCs/CyclinD2. In contrast, the expression of p16, which is up-regulated with aging [28], was increased in both cell types during culture, indicating that not only hMSCs/Empty but also hMSCs/CyclinD2 were aging normally. The rate of increase in hMSCs/Cyclin D2 was higher than in hMSCs/Empty (Figure 3b), suggesting that the promotion of cell proliferation in hMSCs/CyclinD2 induced cellular senescence and enhanced p16 expression. p16 is a tumor suppressor gene [29]; thus, this increase in p16 expression probably prevented unlimited proliferation. Consistent with this notion, some Ewing’s sarcomas contain a homozygous deletion of the p16 locus [16], possibly facilitating subsequent transformation.

In this study, overexpression of Cyclin D2 promoted proliferation of hMSCs but did not lead to unlimited proliferation. Other factors are required for the unlimited proliferation of hMSCs. IGF2BP1 was aberrantly expressed in Ewing’s sarcoma (Table 1), consistent with a previous report of an association between increased IGF2BP1 expression and tumor progression in patients with lung cancer [30]. Thus, we attempted to transduce the IGF2BP1 gene into hMSCs, but IGF2BP1 expression was up-regulated by only 2-fold and transduction efficiency was low (data not shown). The cause for this inefficiency is unclear. Because the growth kinetics of IGF2BP1-transformed E. coli is quite slow (data not shown), it is likely that overexpression of IGF2BP1 is deleterious for hMSCs.

We did not tested whether the other genes listed in Table 1 affect proliferation of hMSCs, because these genes were not thought to directly affect the proliferation. Furthermore, not all Ewing’s sarcomas express EWS-FLI-1: indeed, EWS-FLI-1 mRNA was not detected in Hs 822.T and Hs 863.T (data not shown). Thus, we did not transduce the EWSFLI- 1 gene into hMSCs. However, it is possible that the cooperation of these proteins is important for the development of Ewing’s sarcoma. Thus, it would be interesting to transduce these genes into hMSCs in addition to Cyclin D2.

Cyclin D2 promotes hMSC proliferation and is a candidate biomaker for hMSC transformation.

The authors would like to thank Atsuko Matsuoka for helpful discussions. This work was supported by the Health and Labor Sciences Research Grants for Research on Regulatory Science of Pharmaceuticals and Medical Devices (H23- IYAKU-SHITEI-027) from the Ministry of Health, Labor and Welfare of Japan.

Copyright: © 2013 Kono K, et al. This is an open-access article distributed under the terms of the Creative Commons Attribution License, which permits unrestricted use, distribution, and reproduction in any medium, provided the original author and source are credited.
Top