A 30 year old female patient was hospitalized for septic shock owing to peritonitis due to perforated viscus. The patient’s hemodynamic status was labile and a peripheral venous access line was established for the perfusion of adrenaline due to difficulties in obtaining a central venous access line in the emergency setting. The peripheral venous access initially taken was changed thrice owing to subcutaneous extravasation of the vasopressin. The first skin reaction appeared 7 days after the first venous line was placed on the dorsal surface of the right foot. The second venous line was on the left wrist and the third at the left elbow crease. The patient presented an erythema-like skin reaction with phlyctenes at the three perfusion sites. The evolution was marked by the appearance of progressive necrosis with skin atrophy and transparent discoloration leaving bare the vasculature especially visible on the lower right limb (Figures 1-4). We contacted the National Pharmacovigilance Center and reported the skin reaction that followed the administration of adrenaline. We were told that it could have been a contamination of the adrenaline vials used in the patient, however, clinically there were no stigmata of infection. The vials of adrenaline were put under a toxicology screen and no indications of contamination or expiry were found. We thus concluded that the skin reaction was indeed due to the extravasation of adrenaline in the subcutaneous tissue layer. The patient died shortly afterwards. 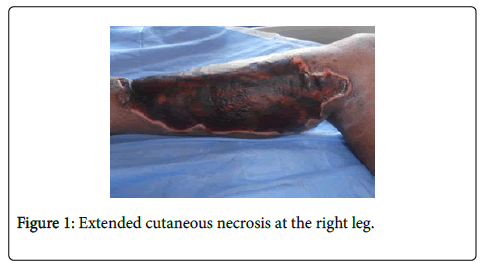 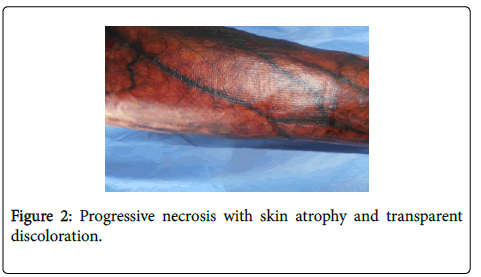 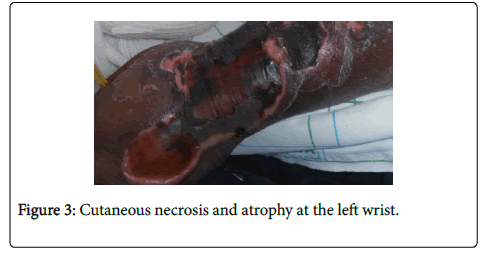 Figure 3: Cutaneous necrosis and atrophy at the left wrist. 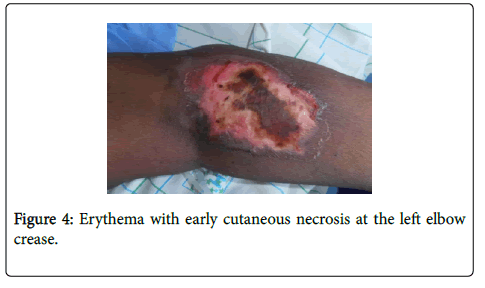 Copyright: © 2017 Majda A, et al. This is an open-access article distributed under the terms of the Creative Commons Attribution License, which permits unrestricted use, distribution, and reproduction in any medium, provided the original author and source are credited.