Leishmaniasis is a tropical disease caused by an intracellular parasite transmitted to humans by the bite of a sand fly, mainly Phlebotomus and Lutzomyia. It is endemic in Asia, Africa, America, and in the Mediterranean region. Depending on parasite and host related factors, the disease can present in three ways: visceral, cutaneous or mucocutaneous forms. In Morocco, cutaneous leishmaniasis is caused by three important Leishmania species [Leishmania major, Leishmania Tropica and Leishmania infantum). Different clinical presentations have been described. We report a case of an unusual presentation of CL: The erysipeloid type.

An 80-year-old male patient with no medical history, presented with erythematous plaque on the left forearm. Initially, there was a painless papule (1 cm) on his wrist which slowly coalesced and formed a red infiltrative plaque in the past 2 months. The patient was treated by oral antibiotics without any improvement. Physical examination revealed an erythematous infiltrative plaque on the left forearm (Figure 1). 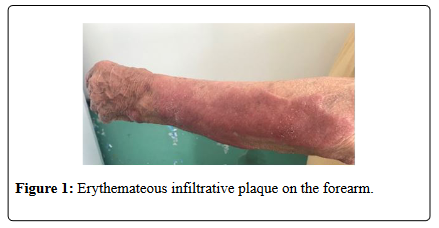 The patient was apyretic and no other systemic abnormalities were detected. Total blood count and inflammatory evaluation tests were normal. A biopsy revealed the presence of a non-caseatingformation in the upper dermis and amastigotes forms of Leishmania (Figure 2) which were also found in the direct microscopic examination of smears. Subtype analysis couldn’t be performed. The patient was first treated with clarithromycine 15 mg/kg/j during 6 months with a small improvement. A treatment with systemic pentavalent antimony (10 mg/kg per day) administered intramuscularly was conducted. The patient received only a total of 6 injections. The treatment was interrupted because the evolution was marked by regression of symptoms within only 6 injections (Figure 3). 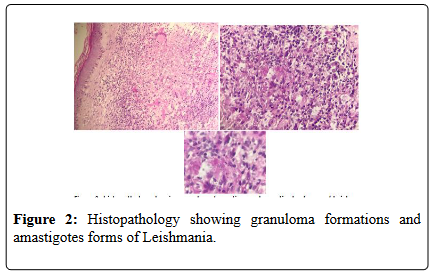 Figure 3: Clinical appearance of the patient after treatment.

Leishmaniasis is a disease affecting about 89 countries and is endemic in Asia, Africa, parts of North and South America and the Mediterranean region. Several forms of cutaneous leishmaniasis are described. They are mainly caused by Leishmania Major, L. infantum and L. Tropica.

After a bite by an infected female phlebotomine sand fly, cutaneous lesions occur at the site of inoculation after an incubation period. The most common presentation is noduloulcerative lesions localized on the exposed areas of the body. The lesions are usually painless. Regional lymphadenopathy may occur. In a few months, spontaneous healing can occur with filling of ulcer, leaving a clear or pigmented scar [1]. However, other clinical presentations of cutaneous melanomas have been reported such as psoriasiform, eczematous, varicelliform, zosteriform, erysipeloid, lupoid and sporotrichoid forms, depending on the host immune status and the subspecies of Leishmania.

Cases of cutaneous leishmaniasis in its erysipeloid form have been reported in Iran, Pakistan, Turkey and Tunisia [2-6]. This type usually affects elderly females and presented as erythematous infiltrative plaque over the face and resembling erysipelas. The etiology of this type is unknown although factors such as senility, specific species of leishmania, hormonal changes, and changes in skin barrier with ageing can cause such an unusual presentation. Our patient is from an endemic region of leishmaniasis and is elderly, thus, he presented with all the epidemiological features.

Other diagnosis should be considered in case of localized forms such as fungal and mycobacterial infection, tuberculosis, sarcoidosis and primary or metastatic tumor.

The diagnosis is confirmed by the demonstration of amastigotes in a Giemsa-stained smear. When the parasite cannot be detected on smear, histopathologic examination can be used.

In chronic lesions, there can be a variable degree of epithelial hypertrophy and the dermis may contain large number of small noncaseating granulomas. Parasites are also present into macrophages and can be detected in early lesions. In our case, the histopathological study shows chronic inflammatory infiltration, non-caseating granulomas in the dermis and amastigotes form of Leishmania, confirming the diagnosis.

Systemic treatment is recommended in cases of multiple or severe lesions (diameter >5 cm).

The parenteral options for systemic therapy include amphotericin B, pentavalent antimonial and pentamidine. There are also oral options such as azithromycine, miltefosine, ketoconazole and fluconazole [7].

Although, pentavalent antimony has the disadvantages of multiple injections and mild-to-moderate clinical toxicity, it’s still an effective drug for cutaneous leishmaniasis and could be proposed for less than 10 days [7].

Copyright: © 2019 Jihane B, et al. This is an open-access article distributed under the terms of the Creative Commons Attribution License, which permits unrestricted use, distribution, and reproduction in any medium, provided the original author and source are credited.