Becker’s nevus is a pigmented cutaneous hamartoma that is normally localized to the upper torso. It is more commonly found in adolescent males and may form part of the Becker’s nevus syndrome, in association with other features which may include overlying hypertrichosis, chest wall, breast or limb hypoplasia and scoliosis. Congenital and linear lesions have been reported but are very rare. We describe here a case of a congenital, linear nevus with histological features diagnostic of a Becker’s nevus, with associated underlying breast hypoplasia. We confirm increased androgen receptors within her nevus and consequently, when our patient became pregnant, her relative antiandrogen profile enabled physiological enlargement of the previously hypoplastic breast beneath this nevus

Becker’s nevus is a unilateral, pigmented cutaneous hamartoma normally found on the upper torso [1] where it may be associated with hypertrichosis, chest wall/breast hypoplasia, limb hypoplasia or scoliosis, as part of the Becker’s nevus syndrome [2].

Although the commonest age of presentation is around puberty, congenital and late-onset lesions have been reported; [3,4] linear lesions are also very rare [5].

There are various documented associations between Becker’s nevi and androgens: They have a greater prevalence in males, usually present at or become more prominent during puberty, and may have overlying hypertrichosis, sebaceous hyperplasia or localized acneiform eruptions [6]. In 1984, Person and Loncope demonstrated increased androgen receptor staining within the Becker’s nevus of a 16-year old male patient in comparison with his unaffected contralateral pectoral skin, where androgen receptor activity was undetectable [7]. Similarly, Grande Sarpa et al. confirmed increased androgen receptor staining within the dermal fibroblasts of three male and additionally three female patients, all with Becker’s nevi; the strongest staining was within a teenage boy’s lesional skin [8].

The objective of this report is to describe an unusual presentation of the Becker nevus syndrome, that is, a congenital and linear lesion that was additionally associated with underlying breast hypoplasia. To our knowledge, this is the first report describing spontaneous correction during pregnancy of breast hypoplasia attributable to a congenital and linear nevus. We have additionally confirmed increased androgen receptor staining within nevoid tissue, and propose that the anti-androgen profile of pregnancy enabled this patient’s physiological breast enlargement.

A 21-year old female patient had a linear, verrucous nevus present on her left chest since birth. She had suffered marked breast hypoplasia underlying the nevus since puberty, when that breast had failed to enlarge in comparison with her contralateral side. There were no associated abnormal signs or symptoms on physical examination. Specifically, she did not have any other features of the Becker’s nevus syndrome such as hypertrichosis, scoliosis or limb hypoplasia.

Clinically the differential diagnosis included a linear epidermal nevus, which would not be expected to have underlying breast hypoplasia, and a Becker’s nevus, that has rarely been reported as congenital and/or linear [3,5]. Histopathologic examination of a biopsy specimen taken from the nevus demonstrated epidermal acanthosis with elongation of the rete ridges, prominent basal hyper pigmentation and hamartomatous enlarged smooth muscle fibers within the dermis, features that would be consistent with a diagnosis of Becker’s nevus [3].

During pregnancy, she subsequently experienced marked enlargement of the previously hypo plastic left breast (Figure 1), such that her two breasts had become near-equal in size. She was not taking any medications and specifically had not been on any contraceptives prior to becoming pregnant. She is now one year post-partum and the breast size has remained stable. 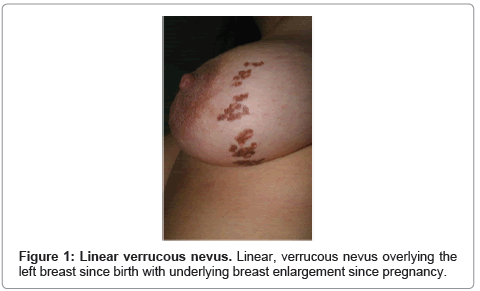 We report an unusual case of a congenital and linear verrucous nevus, which had the histological appearance of a Becker’s nevus. Despite the nevus being linear it was associated with underlying hypoplastic breast tissue, but no other features of the Becker’s nevus syndrome. We believe this to be the first reported case of spontaneous breast enlargement during pregnancy of a previously hypoplastic breast beneath such a nevus.

For nearly 30 years, there have been studies investigating potential associations between androgens and Becker’s nevi [7]. Considering that the state of pregnancy promotes a relative anti-androgen profile (as a consequence of increased sex-hormone binding globulin, decreased free testosterone and a shift towards estrogens), we speculated that this profile enabled her physiological breast tissue enlargement. We therefore performed immune staining in our biopsy sample from the nevus and indeed confirmed increased expression of androgen receptors within the dermal fibroblasts, in-line with previous reports [7,8].

In conclusion we describe the involvement of androgens in Becker’s nevi/Becker’s nevus syndrome, and we also speculate that there may be a future role for topical anti-androgen therapy in cases of Becker’s nevi.

The authors have no conflicts of interest to declare.

Copyright: © 2012 Felton SJ, et al. This is an open-access article distributed under the terms of the Creative Commons Attribution License, which permits unrestricted use, distribution, and reproduction in any medium, provided the original author and source are credited.