Concurrent Validity of Occiput-Wall Distance to Measure Kyphosis in Communities

Concurrent Validity of Occiput-Wall Distance to Measure Kyphosis in Communities

Background: The occiput-wall distance (OWD) is a quick and easily administered method to assess kyphosis. Thus it is likely used in epidemiologic studies. However, there are no data to warrant validity of the tool. This study evaluated concurrent validity of the OWD using a Flexicurve as a standard method. Methods: Subjects were 158 well-functioning elderly, aged at least 60 years old and had a perpendicular distance from the bony prominence of C7 to the wall >0 cm. They were assessed kyphosis using Flexicurve and OWD in a random order. The Pearson correlation coefficient was applied to determine levels of correlation. Results and conclusion: The OWD correlated extremely well with the Flexicurve (r = 0.902, p<0.001), thereby the data confirmed concurrent validity of the OWD. Although the method did not measure spinal angle, the findings suggested benefit of OWD to quantify and monitor degrees of kyphosis in a large number of populations.

Kyphosis is a common disorder in elderly that is normally described as a backward deviation of the thoracic spine exceeding 40 degrees [1,2]. The condition likely reduces ability of balance control and mobility, restricts pulmonary functions, and induces back pain and digestive problems [2-4]. These consequences lead to the loss of independence and decrease quality of life of individuals [3]. Therefore, a method of early detection and monitoring abnormality is important to promote effectiveness of treatments and minimize harmful consequences of kyphosis.

The radiographic Cobb’s method is a standard clinical assessment of kyphosis. However, the method is expensive and exposes individuals to radiation. Therefore, it is not appropriate for periodic followup and screening purposes [5,6]. Yanagawa et al. [7] suggest that an appropriate method to measure kyphosis must be accurate, reliable, practical and inexpensive. Along with this suggestion, a non-invasive method may be more suitable than an invasive method for routine assessments to detect abnormality in clinics and communities. Among common non-invasive methods, Flexicurve is a convenient, affordable and movable method that is available in a stationary shop. The results are accurate and reliable compared to findings from the Cobb’s method (r = 0.98) [8]. Thus it has been suggested as a valuable tool to monitor changes in spinal curvature in clinics and communities [5-9]. However, a malleable band of Flexicurve increases chances of error due to change in shape once removed from the spine [7]. In addition, the process of measurement and result interpretation is time-consuming. Therefore, it may not be suitable to use in a large number of samples.

In epidemiologic studies, the occiput-wall distance (OWD) is widely used to measure kyphosis [10]. The test can be performed easily using the perpendicular distance between bony prominence of the 7th cervical vertebra (C7) or occiput and the wall in a standing position [11,12]. Results of the test can classify severity of kyphosis into 3 levels including mild (≤ 5 cm), moderate (5.1-8 cm), and severe (>8 cm) [12]. The results are associated with depressed mood, postural instability, muscle weakness and disability in elderly. In addition, the findings may account for a large percent of dyspnea and restrictive/ obstructive respiratory dysfunction that often remains unexplained in elderly [10]. Currently, only a few evidences relating to the use of OWD are available. From the researchers’ knowledge, there is no evidence to warrant validity of OWD compared to a standard method. Thus this study investigated concurrent validity of the OWD using data from Flexi curve. Findings of the study would warrant validity of the tool to assess kyphosis in clinics and communities.

The study conveniently recruited well-functioning elderly both males and females with different degrees of kyphosis from several communities in Thailand. The eligible subjects were at least 60 years of age with a BMI between 18.5-29.9 kg/m2 and OWD >0 cm. The study excluded elderly who presented signs and symptoms that might affect participation in the study such as using a walking device, pain or inflammation in the muscles or joints, and other spinal or limb deformities that might affect mobility. The eligible subjects provided a written informed consent approved by the local ethics committee prior to taking part in the study.

Every subject participated in the study for 2 days. On the first day, subjects were interviewed and assessed for their baseline demographics in order to screen for eligibility to the criteria of this study. Then, on the second day, subjects underwent the process to measure kyphosis using Flexicurve and OWD in a random order with periods of rest as needed between the tests. All measurements were executed by a physiotherapist who had good experience in anatomy and palpation skill. Details of kyphosis measures are as follows;

Kyphosis measured using the Flexicurve: Subjects stood up straight and as tall as possible. The cephalic end of Flexicurve was placed on the bony prominence of C7 and it was molded along the spinal curve in a caudal direction to T12. Then the shape was traced onto paper (Figure 1a). A straight line was drawn from the position of C7 to T12 that corresponded to the length of thoracic kyphosis (L), and was measured in cm. The kyphosis height (h) was a perpendicular line from apex of the curve to the point at which it intersected the kyphosis length (L). Then the kyphosis angle was calculated using the formula θ = 4 arctan (2h/L) [7,13]. The measurement was performed 3 trials with a period of sufficient rest between the trials. Then average data of the 3 trials were recorded. Kyphosis measured using the OWD: Subjects stood upright as tall as possible with both heels, sacrum, and back against the wall, and with the lower orbital margin and upper margin of the acoustic meatus on the horizontal plane [10,12]. The perpendicular distance from the bony prominence of C7 to the wall was measured using rulers (Figure 1b) [11,12]. The measurement was performed 3 trials with a period of rest as needed between the trials. Then average distance of the 3 trials was recorded.

Statistical analyses: Data were analyzed using the SPSS program (version 17.0). Descriptive statistics were utilized to explain baseline demographics and findings of the study. Pearson’s product moment correlation was used to quantify levels of correlation between Flexicurve and OWD. Levels of significant differences were set at p<0.05.

Table 1: Baseline demographics of subjects and findings of the study. 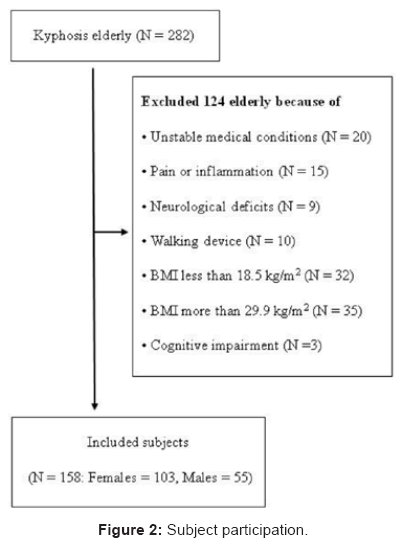 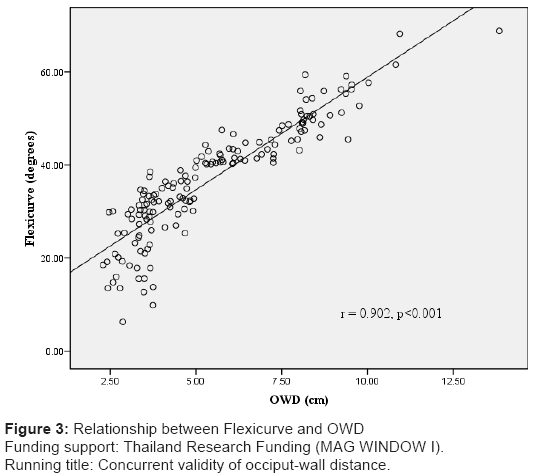 OWD is a quick and easily administered method to assess kyphosis, thus it is likely used in epidemiologic studies [12]. Findings of this study indicated strong relationship between OWD and Flexicurve (r = 0.902, p<0.001, Figure 3), thereby the findings confirmed concurrent validity of the OWD. The association between data from Flexicurve and OWD can be explained by effects of postural changes that commonly occur in individuals with kyphosis. In general, postural changes can be either a cause or consequence of kyphosis. As a cause, postural changes that affect cervical, lumbar and sacral spinal areas such as obesity or pregnancy can influence thoracic curvature. On the contrary, the increment of thoracic kyphosis can alter alignment of other spinal areas, including cervical spinal curve [14]. The increment of cervical lordosis increases perpendicular distance from C7 to the wall. Therefore, thoracic spinal angles as measured using the Flexicurve demonstrated excellent correlation with OWD. Previous studies applied either occiput or C7 as a landmark of OWD measurement [10,12]. This study utilized the bony prominence of C7 as a landmark of measurement in order to truly reflect compensatory distance due to thoracic kyphosis and minimize chance of error when a subject moved their head.

Previously, some studies reported benefits of OWD. Antonelli- Incalzi et al. [12] reported significant correlation between OWD and functional ability of elderly. The study suggested that OWD is an easily measurable marker of poor physical function in elderly women [12]. Balzini et al. [10] found that OWD is associated with pain, emotional status, extent of muscular impairments, and levels of functional limitation. Furthermore, OWD has been suggested as a useful clinical tool for detecting the presence of thoracic vertebral fracture [15]. The results are associated with dyspnea, and restrictive and obstructive ventilatory dysfunction. Thus the method has been suggested to be included in the differential diagnosis of dyspnea and ventilatory dysfunction in the elderly [16].

Data of this study confirmed validity of the OWD. Although the method cannot substitute a standard method because it does not directly measure spinal curvature at a given point, findings of the study suggest benefit of OWD to quantify degrees of kyphosis in a large number of populations. The well-recognized association with a standard method confirmed in this study as well as findings from previous studies makes OWD a valuable tool for epidemiologic research.

The researchers are aware that the study has a number of limitations. Subjects in the study were conveniently recruited which may limit generalizability of the findings. The data warrant the use of OWD in individuals with BMI between 18.5-29.9 kg/m2. However, chances of errors may be increased when utilized the method in individuals with potential limiting factors for C7 palpation such as obesity, abnormal fat distribution, and mass or tumor in upper back area. In addition, data taken from rulers (Figure 1b) might be errors if alignment of the rulers was not parallel to the landmark (C7) and perpendicular to the wall. Furthermore, kyphosis measurements using Flexicurve and OWD require good palpation skill. Thus, using these techniques in general assessors may need a training session.

Copyright: © 2012 Wongsa S, et al. This is an open-access article distributed under the terms of the Creative Commons Attribution License, which permits unrestricted use, distribution, and reproduction in any medium, provided the original author and source are credited.