Comparison of the Therapeutic Effects of Rectal Diclofenac Sodium and Intramuscular Pethidine Injection in the Treatment of Acute Renal Colic: A Randomized Clinical Trail

Comparison of the Therapeutic Effects of Rectal Diclofenac Sodium and Intramuscular Pethidine Injection in the Treatment of Acute Renal Colic: A Randomized Clinical Trail

Objectives: Renal colic is a type of abdominal pain commonly caused by obstructive stones. The aim of this study was to compare the safety and efficacy of rectal diclofenac sodium (RDS) and intramuscular pethidine (IMP) injection in acute renal colic.

Materials and Methods: In an interventional prospective double-blind randomized clinical trial, 541 patients who had referred to our center because of acute renal colic were divided into two groups: (1) RDS with 266 participants and (2) IMP with 275 participants. Pain relief was measured by asking the participants at 10, 20 and 30 minutes after taking each drug.

Conclusion: Although there was no significant difference in analgesic effect between the two drugs, using diclofenac sodium in suppository form is highly recommended for renal colic patients because of availability, being less expensive, safety, and its self-administration.

Renal colic is a common urological emergency often caused by the movement of ureteral stones and characterized by severe pain. Patients describe this pain as the most severe and excruciating situation ever experienced [1]. This condition affects 5-12% of the population in industrial societies, at least once in their life time, and its recurrence rate is approximately 50% [2]. The renal colic pain is usually related to the contraction of ureter soft muscles due to the presence of stone [3]. Therefore, the most important consideration in the emergency management of renal colic is pain control and relief [2]. Both parenteral opioids and non-steroidal anti-inflammatory drugs (NSAIDs) are commonly used to provide analgesia in renal colic [4]. Among opioids, morphine and pethidine were used traditionally, but they have been replaced by NSAIDs because of their side effects such as addiction, constipation, respiratory depression and mental changes [5,6]. Experimental studies have suggested that prostaglandins play an important role in producing pain in renal colic and therefore, anti-prostaglandins can eliminate or diminish this type of pain [7,8].

Diclofenac (2,6-dichlorophenylamino phenylacetic acid) is an NSAIDs which is used for reducing inflammation and is an analgesia in certain conditions such as renal colic [9]. Its exact mechanism of action is not entirely known. However, the primary mechanism responsible for its analgesic effect is the decline in prostaglandin synthesis by inhibition of cyclooxygenase, a basic enzyme in the prostaglandin synthesis pathway [10]. Still, pethidine is also a popular synthetic analgesic opioid of the phenylpiperidine class [11].

No study has reported serious adverse consequences for pethidine. This may be because of the short follow-up period and failure to specifically record renal dysfunction and gastrointestinal bleeding. Therefore, these results should be reexamined carefully [3]. When a single bolus of analgesia is used, NSAIDs are recommended as the first line of treatment by European urological association [12]. However, in some conditions such as having severe pain, using opioids is inevitable. The aim of this study was to compare the analgesic effect of rectal diclofenac sodium (RDS) and intramuscular pethidine (IMP) in patients with renal colic.

In an interventional prospective multicenter double blind randomized clinical trial, 586 patients with renal colic who had referred to our centers in Jahrom and Shiraz cities, both in Iran, between December 2009 and April 2011 entered the study. The study protocol was approved by the ethics committee of Jahrom University of Medical Sciences. All patients who enrolled in this study signed an informed consent form. However, 45 patients who had a history of allergy to NSAIDs, hemorrhoids and anal fissures, peptic ulcers, coagulopathy, inflammatory bowel disease, pregnancy, ischemic coronary diseases, chronic obstructive pulmonary disease, and liver or renal failure were excluded from the study. So, 541 patients were selected as participants and were randomly allocated into two groups with the approximately ratio of 1:1. The first group (266 participants) received a single 100 mg dosage of RDS and the other group (275 participants) received a single 50 mg dosage of IMP. Randomization was performed using a computer-generated random permuted block method. All participants were followed up and included in the analysis without any exclusion.

All data were presented as numbers and percentages. Chi-square test was used for analysis of association between type of treatment and response to each treatment using statistical package for social sciences (SPSS) software version 16. P value less than 0.05 was considered as statistically significant.

A number of 541 participants entered this clinical trial. There were 351 men (64.9%) and 190 women (35.1%). Percentages of participants who responded to each drug are shown in Table 1. Although, the number of participants which responded to IMP was higher than those who responded to RDS (254 (92.3%) vs. 233 (87.5%), respectively), this difference was not significant (P=0.06). Patient distribution was based on the time of response to analgesic effects of RDS and IMP (Figure 1). According to these data, the percentage of patients that experienced pain reduction at 10 and 20 minutes after using of the drug in RDS group was higher than IMP group (45.5% vs. 44.7% in 10 min and 71.9% vs. 69.5% in 20 min, respectively). However these differences were not significant (P=0.06). Figure 2 illustrates the flowchart of the study.

Table 1:Number and percentage of patients which responded to rectal diclofenac sodium and intramuscular pethidine. 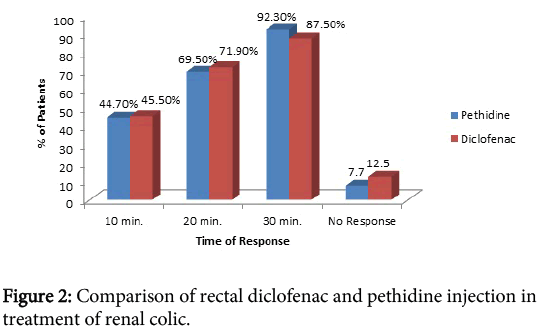 Figure 2: Comparison of rectal diclofenac and pethidine injection in treatment of renal colic.

Nowadays, urolithiasis a common health problem worldwide and renal colic may be the first presenting symptom. Prevalence of acute renal colic is about 10% in general population. Relief of the acute pain is the mainstay and first step in the management of renal colic. In this situation NSAIDs are recommended as the first line therapy and opioids as alternatives. Alpha blockers also reduce the recurrence of the pain episodes. Among NSAIDs, diclofenac is the most common prescribed drug (oral, intramuscular or rectal). Still, this drug may alter the renal glomerular filtration rate in patients with renal insufficiency. However, there is no evidence of its adverse effect on the kidney with normal function [12].

Traditionally, opioids and NSAIDs were used for treatment of acute renal colic with almost equal efficacy [13,14]. However, the latter has few side effects [7,8]. Oral consumption of analgesics usually is not suggested due to nausea and low effect in this route. Therefore, intravenous or intramuscular methods are more acceptable. Intramuscular method seems better because it can be administered faster and there is no need to monitor the patient in emergency unit [15]. If it is not contraindicated and tolerated by the patient, suppository route (rectal) seems better, because it will be self-administrative, with no need of injection by an experienced medical staff.

In previous studies, the efficacy of diclofenac sodium versus pethidine in acute renal colic was evaluated. In a study by Hetherington and Philip on 58 renal colic patients, it had been concluded that 75 mg of diclofenac sodium in intramuscular route was more effective than 100 mg of pethdine in the management of acute renal colic and had fewer side effects [7]. Also, Thompson and colleagues reported that RDS provided potent, specific analgesia in renal colic. They concluded that diclofenac is superior to pethidine because its effect starts at a similar time but lasts longer [8].

In a review by Duqenne and colleagues the indications of spasmolytics in renal colic were studied. This study revealed that although they are used commonly in emergency department, their use is not recommended due to less efficacy and side effects and it is better to use diclofenac instead [16]. In a randomized trial on the efficacy of intramuscular diclofenac and tramadol, Salameh and colleagues concluded that diclofenac has better response as a single medication and suggested tramadol in cases that diclofenac could not be use [14].

Rojas and colleagues have reviewed the current practice in the emergency departments and concluded that more than half of physicians prescribed NSAIDs for treatment of renal colic in combination with opioids [17]. In another study the clinical efficacy of the suppository Spasmofen (a combination of 100 mg of Icetoprofen and 10 mg of Hyoscine) was compared with intravenous ketorolac. The results revealed the safety and effectiveness of rectal spasmofen in the pain relief of renal colic [18]. Davenport and Waine also studied the role of NSAIDs in renal colic. They suggested that NSAIDs are highly effective in the treatment of renal colic, but may have hazards in patients with gastrointestinal ulcers, cardiac function impairment and renal insufficiency. They also found that NSAIDs may diminish the chance of colic episode recurrence and hospital referral, but do not alter the passing of the stone [19].

The fact that diclofenac can be self-administered and is not an opiate, makes it a useful drug in general practice, especially for patients with recurrent renal colic. Pethidine as a synthetic opioid is about one tenth as potent as morphine. Pethidine has more lipid solubility than morphine, elimination half-life of two to four hours and duration of action of only two to three hours [20]. In a double blind clinical trial, analgesic efficacy, patient satisfaction and side effects of morphine and pethidine in patients with clinically suspected renal colic were evaluated. Although, the results demonstrated that there were no significant differences between morphine and pethidine in respect to any of the measured parameters, the authors concluded that due to the well-known adverse effects related to pethidine, morphine should be the preferred agent in suspected renal colic, when an analgesic opioid is to be used [21]. Moreover, it had been reported that norpethidine, the predominant metabolite of pethidine, is potentially toxic and causes central nervous system excitability such as tremors, myoclonus or seizures. Also, accumulation of norpethidine has been seen in patients with normal kidneys, particularly with large doses or frequent dosing intervals [22] (Figure 3). 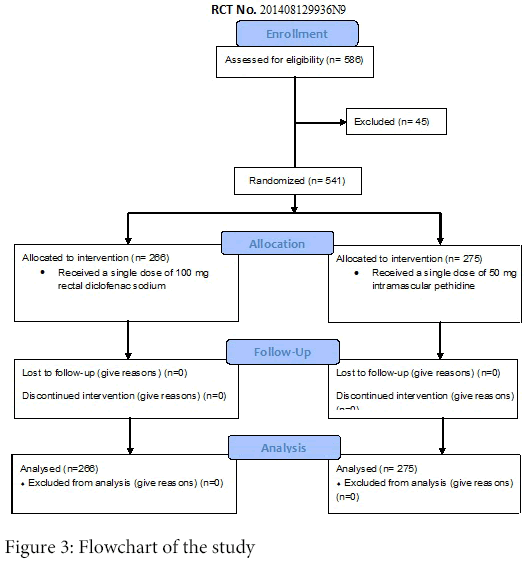 Figure 3: Flowchart of the study.

This clinical trial demonstrated that although, the percentage of patients with diminished pain in 10 and 20 min after using of RDS was higher than IMP, this difference was not significant. Therefore, the efficacy of these two drugs is similar. However, because of availability, being less expensive, safety, and its self-administration, use of RDS is highly recommended in renal colic compared to IMP.

Because of the adverse effects of pethidine and its metabolite, i.e. norpethidine, and the possibility of pethidine addiction, we believe that diclofenac suppositories should be considered as the first line treatment of renal colic, both in hospital and in general practice. Moreover, clinical and paraclinical studies about possible side effects of rectal diclofenac sodium are highly suggested. Although, our study suggested suppository form of NSAIDs as the fist line for the treatment of renal colic with an acceptable short time efficacy, their long term effects should also be further evaluated in future studies.

The authors wish to thank the physicians and nurses of the Emergency Department of the Motahari and Peymanieh Hospitals of Jahrom and Faghihi and Nemazi Hospitals of Shiraz. Also, the authors would like to thank Seyed Muhammed Hussein Mousavinasab for his sincere cooperation in editing this text.

Copyright: © 2015 Hosseini MM, et al. This is an open-access article distributed under the terms of the Creative Commons Attribution License, which permits unrestricted use, distribution, and reproduction in any medium, provided the original author and source are credited.