Biosorption Potential of the Microchlorophyte Chlorella vulgaris for Some Pesticides Biosorption Potential of the Microchlorophyte Chlorella vulgaris for Some Pesticides

Nowadays, pollution of either surface or ground water with pesticides is considered as one of the greatest challenges facing Humanity and being a national consideration in Egypt. Agricultural activities are the point source of pesticides that polluting water bodies. The present study investigated the potentiality of Chlorella vulgaris for bioremoval of pesticides mixture of 0.1 mg/mL for each component (Atrazine, Molinate, Simazine, Isoproturon, Propanil, Carbofuran, Dimethoate, Pendimethalin, Metoalcholar, Pyriproxin) either as free cells or immobilized in alginate. Two main experiments were conducted including short- term study having 60 min contact time using fresh free and lyophilized cells and other long-term study having five days incubation period using free and immobilized cells. In the short-term study, the presence of living cells led to bioremoval percentage ranged from 86 to 89 and the lyophilized algal biomass achieved bioremoval ranged from 96% to 99%. In long-term study, the presence of growing algae resulted in pesticides bioremoval ranged from 87% to 96.5%. The main mechanism behind the removal of pesticides in water phase is proposed to be biosorption onto the algal cells. This conclusion is based on the short duration required for removal to occur. The obtained results encourage using microalgae in bioremediation of pesticides polluted water.

Recently, application of pesticides is known in everywhere all over the world resulting in exposing the general population to low concentrations of pesticides used in agriculture as herbicide, insecticides and fungicides for controlling plant pests as well as contamination of air, water and foods [1,2]. Pesticides contamination of water has been well documented worldwide to be considered as a potential risk for the ecosystem. Pesticide residues are frequently present in the aquatic environments according to surface runoff, leaching from surface pesticides applications and via industrial activates and/or domestic sewage as founded by Miliadis, Tikoo and Priyadarshani [3-5]. This is why we are in an urgent need for developing some efferent bioprocesses for remediation of pesticides pollutants. Biosorption process is one of the bioremediation mechanisms which is favorable, using living microorganisms as fungi, microalgae as well as bacteria for recovery process that have low costs as suggested by Naturvårsverket [6,7].

In the near future, water reusing will become very important in densely populated arid areas where there is an increasing demand to supply water from limited supplies. Human well-being in a future world will depend mostly upon this sustainable resource and the characterization of emerging contaminants will become important for ecological and human health risk assessments and commodity valuation of water resources [8,9]. Egypt characterized with developing agricultural activities accounted 28% of the total national income, and nearly half of the country’s work force is dependent on the agricultural subsector for its livelihood.

There are anaggravating chemical environmental contamination by attributed to using organo-chlorinated pesticides, herbicides, fungicides as well as insecticides that are anticipated along the Nile Delta, which is referred to as ‘‘Green Lungs of Egypt’’ [10]. Moreover, chemical industries in Egypt is one of the main sources of hazardous wastewater. Barakat suggested that, water pollution is exacerbated by agricultural pesticides, raw sewage, and urban and industrial effluents [11]. Consequently, remediation of pesticides from water bodies as well as ground water is very urgent, especially bioremediation by microalgae.Chemical properties of the pesticide such as molecular weight, functional groups and toxicity affect the metabolic degradation of it [5]. Algae appear to be more able to metabolize organic compounds with low molecular weights than larger molecules [12-14].

The main objective of this study is to investigate the capability of the microalga C. vulgaris either free or immobilized cells for bioremoval of ten pesticides mixture.

Fresh water Chlorella vulgaris was isolated from water sample from river Nile. Culture purification was according to Andersen [15] and the alga was identified according to Philipose [16]. Chlorella vulgaris was grown in axenic cultures at 27 ± 2°C under continuous illumination 3600 lux in 500 ml Erlenmeyer flasks, containing 200 ml BG11 medium for 5 days incubation period in an IlluminatedMemmert incubator (Memmert GmbH+Co. KG, Germany) [17]. The starting inoculum size of C. vulgaris was 10% (v/v) taken from 5 day-old culture, supplemented as biomass pellet after centrifugation (3000 g, 15 min, Bench-top - TD5B, Germany). Lyophilized algal biomass was prepared from 5 day-old culture pellets that washed once with distilled water and lyophilized in a freeze dryer for 24 h. The lyophilized biomass was stored under dark conditions at room temperature, while living biomass was produced under the same growth conditions.

The short-term study: An initial concentration of 2.0 μg L־1 and 10 μg L־1 was obtained by adding the pesticide mix to sterile Milli Q water. The experiments included Lyophilizedalgal biomass, living algalbiomass and a control without any biomass, with three replicates per experiment. The amount of biomass (living biomass or lyophilized biomass) added to each replicate corresponded to 10% (v/v) taken from 5 day-old culture. There were three replicates per treatment and the total volume of each culture was 100 ml. The treatments were stirred on anorbital shaker at a speed of 380 rpm for 1 h at room temperature (Thermo Scientific™ MaxQ™ 4450 Benchtop Orbital Shakers, USA). After one hour, the biomass was removed from the aqueous phase by centrifugation and the samples were stored in the freezer at -20°C until analysis.

The long-term study: Final pesticides concentrations of 2.0 μg L־1 and 10 μg L־1 was obtained by supplementing the pesticides mixture to sterile BG11 with inoculum volume of 10% (v/v) of a five-day old culture with total volume of 100 ml. The experiments were kept under the growing condition described above for 5 days. After the experiment the biomass was removed by centrifugation and samples of the aqueous phase were taken and stored in the freezer until analysis.

Preparation of immobilized algae-alginate beads: After 7 days culturing, algal cells at their log phase were harvested by centrifugation at 5000 rpm for 10 min at 48°C, the pellet was washed and resuspended in sterilized deionized water (20 ml). This concentrated algal suspension was then mixed with 3% (w/v) sodium alginate solution in 1:3 volume ratios to yield a mixture of algal-alginate suspension which was dropped into calcium chloride solution (2.5%) using magnetic stirrer (CORNING BC620D, USA) to form uniform algal beads. The algal beads were left in CaCl2 solution for 12 h forhardening. Blank alginate beads were prepared in the same way as the algal beads without adding algal cell suspension.

Chromatographic analyses: Samples (50 ml) from the aqueous solution were sent to The Reference Laboratory for Drinking Water, Cairo, Egypt for chromatographic analyses. Reference method EPA 536, were used to conduct the pesticides analysis, which is based on a combination of liquid chromatography (LC) and mass-spectroscopy (MS) specifically called LC-MS/MS (tandem-MS) [20]. Tandem- MS (Xevo-TQ-S, Waters Corporation, Milford, MA, USA) provides low detection limits and very high security, which means that more substances can be tracked at lower level [21].

As illustrated from Figure 1, the highest pesticides bioremoval activity of Chlorella vulgaris living cells was recorded to the herbicide atrazine (0.213 μg/l) with initial concertation 2 μg/l, while the herbicide isoproturon recoded the minimum biosorption (0.291 μg/l). Starting with 10 μg/l pesticide mixture, the maximum absorption was documented to the herbicide molinate and the minimum to pendimethalin (1.112 μg/l and 1.687 μg/l respectively). 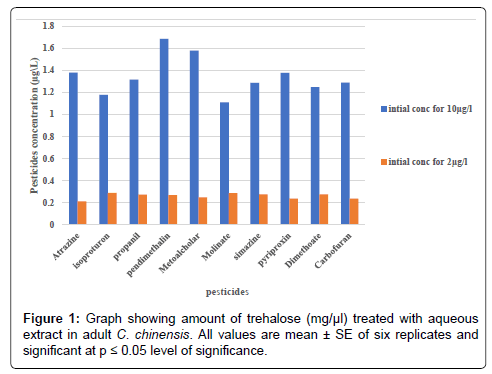 Figure 1: Graph showing amount of trehalose (mg/µl) treated with aqueous extract in adult C. chinensis. All values are mean ± SE of six replicates and significant at p = 0.05 level of significance. 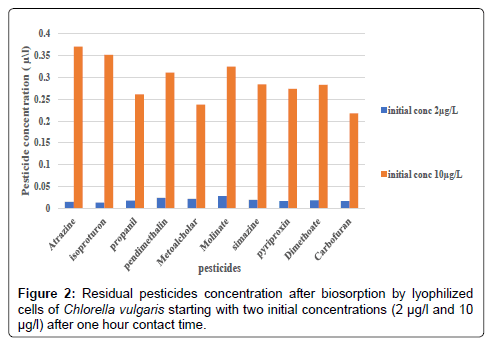 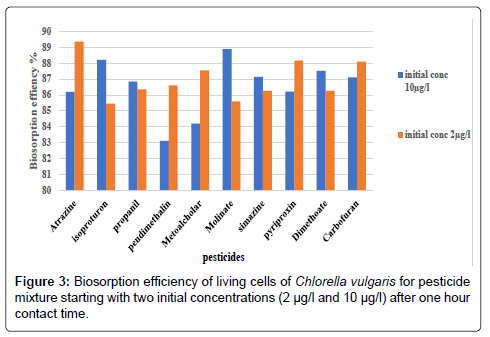 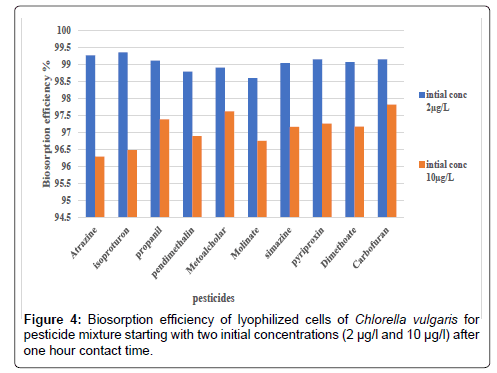 Long-term study by living C. vulgaris biomass: Long term experiment with living C. vulgaris biomass (Figure 5) reviled that, bioremoval activity reached the maximum level (0.065 μg/l) with the herbicide simazine, while the minimum bioremoval activity was indicated to pendimethalin (0.243 μg/l) with the initial pesticides concentration 2 μg/l. Although beginning with 10 μg/l, the maximum biosorption activity (0.43 μg/l) was restricted to simazine and the minimum activity (1.186 μg/l) was illustrated to propanil. 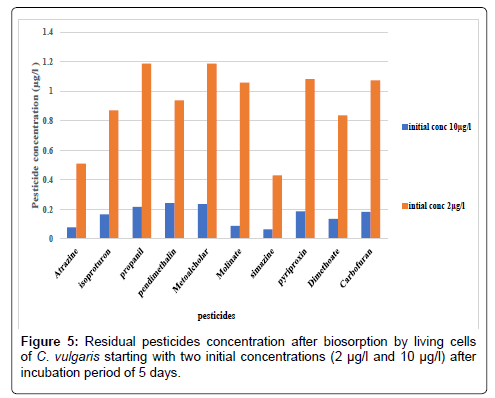 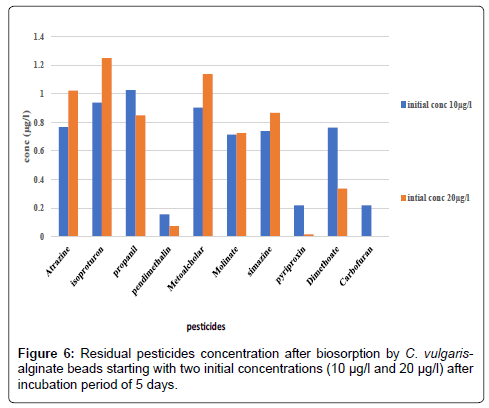 Long term experiment with living C. vulgaris biomass (Figure 7) demonstrated that, biodegradation efficiency reached its maximum level (96.75%) with the herbicide simazine, while the minimum absorption activity was restricted to pendimethalin (87.85%) with the initial pesticides concentration 2 μg/l. Although beginning with 10 μg/l, the maximum biosorption efficiency (95.7%) was recorded to simazine and the minimum activity (88.14%) was illustrated to propanil. 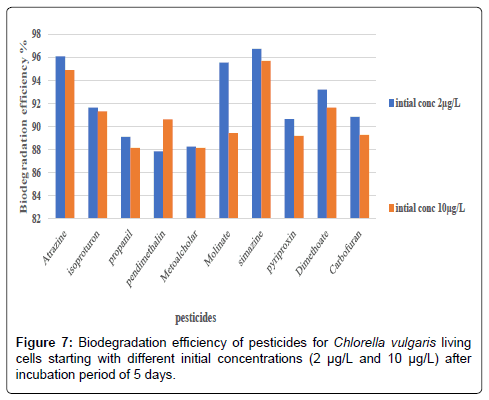 In respect to biosorption potentiality and biodegradation, immobilization of C. vulgaris cells in alginate maintained distinct pesticide biosorption potentiality with the two initial concentrations 10 μg/l and 20 μg/l for 5 days incubation period. Figure 8 illustrated maximum (98.43%) and minimum (89.74%) biosorption activity of the two pesticides pendimethalin and propanil respectively for 10 μg/l as initial concentration whereas (87.5% to 99.97%) represented the maximum and minimum biosorption efficiency recorded for carbofuran and isoproturon, respectively starting with 20 μg/l. 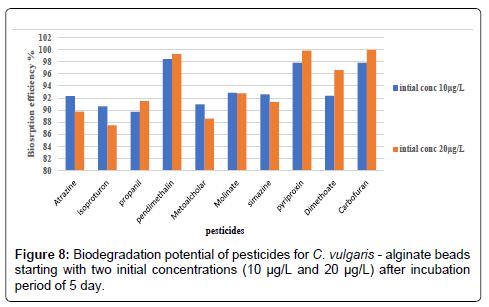 Recently, the spreading use of pesticides in the exhaustive agricultural activities and the modern daily life as well resulted in urgent environmental complications needing non-conventional treatment strategies as using of microalge for bioremediation processes. Present study indicated that, short-term study using both living and lyophilized biomass of C. vulgaris achieved high removal percentages as illustrated in Figures 1-4. The bioremoval of these pesticides over a period of 60 minutes suggested that the probable mechanism as biosorption according to the finds of Komárek, whereas, in Long-term study, there was sufficient time for some mentalizations processes occurred and the algae may either have biosorbed, metabolized or facilitated the degradation of pesticides, or it can be attributed to a combination of all these mechanisms [22]. Exhaustive agricultural activates which depends on using agrochemicals as fertilizers and pesticides, also they increase the global food production but also the at the same time contaminate the environment extensively as suggested by Cáceres, Singh and Walker [23,24].

Algal cell size, density, morphology and physiological activates can be attributed to biosorption and removal of pesticide. Microalgae is characterized by processing high surface area to biovolume ratio which provide high potential for sorption and the following inter action with pesticides. microalgae can utilize pesticide at the nontoxic levels. This was explained by Butler who reported that some macroalgal species (Chlorella, Monoraphid, Actinastrum, Scenedemu, Nitzschia) had the ability to degrade herbicides as following:1 ppm of carbaryl and diazinon, and 0.01 ppm of methoxychlor and 2,4-D [25]. Microgreen algae C. vulgaris and Scenedesmus bijugatus could metabolize organophosphorus insecticides (mon ocrotophos and quinalphos) while some cyanobacteria (Synechococcus elongatus, Phormidium tenue and Nostoc linckia) could metabolized these pesticides in the range of 5 to 50 ppm via 30 days as demonstrated by Megharaj [26]. Anabaena sp. and Aulosira fertilissima stored DDT, fenitrothion and chlorpyrifos in their cells as indicated by Lal, who reported that Anabaena sp. Absorbed 1568 ppm DDT, 3467 ppm fenitrothion and 6779 ppm chlorpyrifos, while A. fertilissima stored 1429 ppm DDT, 6651 ppm fenitrothion and 3971 ppm chlorpyrifos; where as these cyanobacteria species could metabolize DDT to DDD and DDE [27].Megharaj, indicated that greenalgae (C. vulgaris and S. bijugatus) and cyanobacteria (N. linckia, Nostoc muscorum, Oscillatoria animalis and Phormidium foveolarum) could metabolized the organophosphorus insecticide methyl parathion, and as a phosphorus source [28]. After 30 days of incubation, O. animalis and P. foveolarum totally biosorbed 20 μg mL־1 methyl parathion as well as its hydrolysis product PNP, whereas N. muscorum could oxidize the nitro group of PNP to nitrite via fifteen days. Each of N. muscorum and A. fertilissima could utilize each of the following monocrotophos (100 ppm), malathion (75 ppm), dichlorovos (50 ppm) and phosphomidon (25 ppm) as suggested by Subramanian [29]. Mode of nutrition could interfere with the ability of the pesticide detoxification of some algae. C. vulgaris with stand poisonous concentrations of carbofuran when cultivated ixotrophicallyon glucose or acetate as external cabon sources [30].

It is concluded that the lyophilized biomass achieved removal percentages reached up to 99% of pesticides which was higher than living C. vulgaris biomass at the short-term experiments. On the other hand, long-term experiments proved the ability of growing Chlorella vulgaris for the removal of pesticides. The present results indicate the possibility of water bioremediation using microalgae for removal of organic pollutants (pesticides) in water.

Copyright: © 2017 Hussein MH, et al. This is an open-access article distributed under the terms of the Creative Commons Attribution License, which permits unrestricted use, distribution, and reproduction in any medium, provided the original author and source are credited.
Top