Basal Cell Carcinoma on a Nevus Sebaceous of Jadassohn

Basal Cell Carcinoma on a Nevus Sebaceous of Jadassohn

Nevus Sebaceous of Jadassohn (NSJ) is defined as a hamartoma composed predominantly of sebaceous glands, which can progress to benign as well as malignant tumors. We present a case of hamartoma since birth in the scalp with degeneration in Basal Cell Carcinoma (BCC) after 68 years.

We report the case of a 68-year-old women with a yellowish plaque located in the left temporal region since birth, without any medical follow-up. She reported a change of the lesion with appearance of an ulceration developed 6 months ago. A physical examination revealed a warty plaque measuring 56* 45 mm with an ulceration at the lower part of the lesion shown in Figure 1. Local alopecia was present. Dermoscopy found a pinkish-yellowish plaque with a fiat mamillonated surface, shiny white to red areas, short fine telangiectasia, arborizing vessels and large blue-gray ovoid nests shown in Figure 2. The rest of the clinical examination was normal.

Figure 1: A warty plaque with an ulceration at the lower part of the lesion. 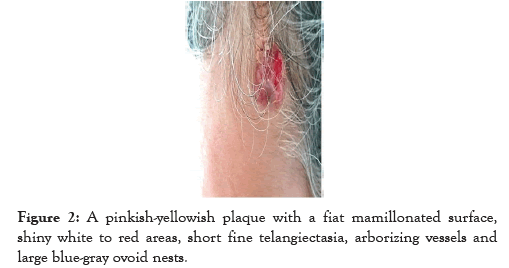 The whole evoked the secondary appearance of a BCC developed in a sebaceous nevus.

Histological examination confirmed this diagnosis and specified the type of BCC (infiltrating BCC). A surgical exeresis of the lesion with margins of 1 cm and reconstruction by flap of rotation was realized and the histological study of the operative part shows healthy margins.

No complications or recurrences were noted after a 24-month follow-up period shown in Figure 3. Figure 3: Follow-up of the patient 1 month and 24 months after surgery

Nevus sebaceous is considered as a benign skin malformation. It starts to develop at birth or in early childhood. The most frequent locations the scalp, face and neck [1]. The evolution of the NSJ goes through three stages [2]: at the beginning, during the childhood period, the lesion is flat, yellowish-pink in color and of soft consistency. With the beginning of puberty and the activation of the sebaceous glands under the action of hormones, the lesion becomes udder and thicker. Finally, the third stage, which occurs after the age of 40, is characterized by the occurrence of tumors such as trichoblastoma, trichilemmoma and syringocystadenoma papilliferum [3,4]. NSJ is generally accompagned by focal alopecia, but without underlying ulceration or pigmentation. These last signs are suspicious and predictive of malignant transformation [1]. On the other hand, transformation into malignant tumors (BCC, apocrine carcinoma, sebaceous or squamous cell carcinoma) remains rare and occurs in only 2.5% of cases. BCC is the most frequent and constitutes 1.1% of malignancies [5]. Histologically, when NSJ and BCC are associated, in addition to the papillomatous hyperplasia of the epidermis and sebaceous glands characteristic of NSJ [6], basaloid cells arranged in palisades with retraction slits can be distinguished. The etiopathogeny of the association of these two entities remains poorly elucidated with studies that have shown a mutation of the gene patched [7]. The conduct to be practiced in front of any NSJ is a lifetime clinical supervision of the lesion, otherwise surgical practice may be offered to the adolescent either for prophylactic or aesthetic genetics [8]. Other therapeutics are also possible such as photodynamic therapy, laser CO˝ and dermabrasion but with persistent risk of malignant transformation. In case of suspicious signs of malignant transformation, surgical intervention is obviously mandatory.

Through this presentation, we will highlight the importance of regular lifetime follow-up of patients with NSJ. Clinicians must be aware of the predictive signs of malignant transformation and confirm the diagnosis as early as possible by histological examination. Surgical excision is recommended.

Copyright: © 2021 Abdelmouttalib A, et al. This is an open access article distributed under the terms of the Creative Commons Attribution License, which permits unrestricted use, distribution, and reproduction in any medium, provided the original author and source are credited.