Attitude and Awareness of Adverse Drug Reaction Reporting by Health Professionals in Seven Hospitals in the Holy City of Makkah, Kingdom of Saudi Arabia

Attitude and Awareness of Adverse Drug Reaction Reporting by Health Professionals in Seven Hospitals in the Holy City of Makkah, Kingdom of Saudi Arabia

Introduction: The increasing prevalence of Adverse Drug Reaction (ADR) has been reported by many countries and to develop a good ADR reporting system is the need of present time.
Aim and objective: To assess attitude and awareness towards ADR reporting and factors that influences their reporting by health professionals.
Materials and method: The present cross-sectional study was conducted in seven hospitals in Makkah. All the health professionals were invited to participate in the study. A prescribed questioners was used to collect basic information, professional information and knowledge about ADR reporting system.
Results and conclusion: It was observed that most of the professionals were aware of ADR. They were having positive attitude to report ADRs. But major factor found as obstacle in ADR reporting were lack of training, non availability of forms, insufficient clinical knowledge and fear to report ADR.

Today, there is a public expectation that diseases can be alleviated by suitable use of drugs. The presence of Adverse Drug Reactions (ADRs) is considered to be a global problem and a major concern for causing unexpected morbidity and mortality [1]. This is reflected by ADRs being claimed to be responsible for many patient hospital admissions and based on meta-analyses and systematic reviews the percentage rate of admissions was 5% [2].

The increasing prevalence of ADR has been reported by many countries. For example: 12% in Sweden [3], 11.5% in Norway [4], 12.9% in New Zealand and 16.6% in Australia [5]. In USA 0.32% of death in hospital patients was due to ADR [6]. In 2000, the American Institute of Medicine reported around 6000 deaths annually due to the ADRs. In the United Kingdom (UK), studies showed during 1999-2008 the numbers of patients admissions for all NSH public English hospitals in England were 557,978 related ADRs which represented 0.9% of total hospital admissions. Every year the rate of ADRs is increased by 76.8% and the mortality rate increased by 10% [7]. This problem has economic cost for both the person and society, which cannot be predicted from the clinical trials due to their limitations in identifying ADRs for unexpected and/or rate events [8].

Thus ADR reporting is the cornerstone for any Pharmacovigilance system [9]. The attitude and awareness towards Adverse Drug Reaction (ADR) reporting shows great variation among the health professionals and many factors influences the reporting of ADR.

b) Factors that influence their reporting by health professionals.

The present cross-sectional study was conducted in the Holy city of Makkah, Kingdom of Saudi Arabia. For this purpose the author visited seven hospitals in Makkah. Out of these hospitals 5 were general hospital and 2 were specialists hospitals, which were the King Abdul- Aziz Hospital, King Faisal Hospital, General Ajiad Hospital, Children and Delivery Hospital, Abin-Sina Hospital, Al-Noor Specialist Hospital and General Hira Specialist Hospital. All the health professionals were invited to participate in the study.

The study was fully explained to the participating health professional and they were assured about the anonymity and confidentiality of the data. The responses of the health professionals were collected on a pre-structured questionnaire either obtained at the same time as the distribution or collected over the next 12 weeks. 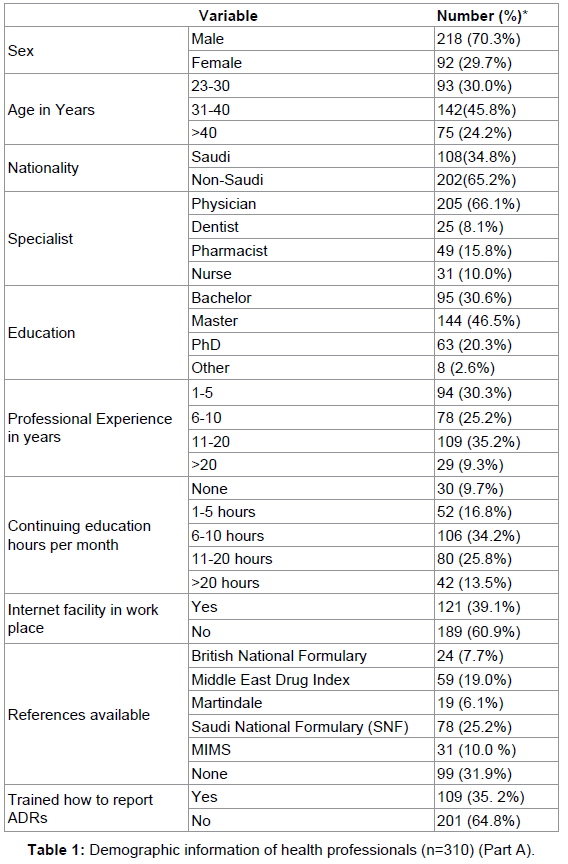 Familiarity with the ADR reporting system

The results revealed that 47.1% (n=146) of the responders were aware of existence of ADR reporting and monitoring system. 51.9% professional said that ADRs reporting program was present in their hospital. 59.1% professional were not aware of the existence of National Pharmacovigilance Center (NPC) in Saudi Food and Drug Authority (SFDA). 55.5% had learnt about the ADRs programme from official work and thirty-six percent of respondents thought the MOH was the department which was responsible for receiving the ADRs reports and interpreting them (Table 2).

Table 2: Familiarity with the ADR reporting system (Part B).

The purpose of ADRs reporting system

50% of the health professionals think that the ADR reporting and monitoring system had benefited patients by identifying safe drug use. 46.1% professional opinioned that ADR reporting will simply identify rate of incidence. 54.2% of health professionals considered that the reporting system was to identify ADR within the same pharmaceutical class. 48.4% respondents considered the purpose of the ADR reporting was to detect potential ADRs. 42.9% of respondents thought the system served as a source of information about the characteristics of ADRs whereas 30.6% were not sure (Table 3).

Attitude towards the ADR reporting system

According to 50.4% professionals reporting form was too complicated whereas 58.1% believe that reporting ADRs was time consuming. One of the major constrain in reporting of ADR was insufficient clinical knowledge (64.9%). 52% of professionals believe that all ADR were already known. Finally, 57% of health professionals stated that the lack of ADRs reporting may reflect the fear to report such events (Table 5).

Familiarity with the ADR reporting system was also accessed (Table 2) in the present study. It was observed that the majority of health professional expressed an inadequate knowledge and awareness of the ADRs reporting program. These findings suggest that more cooperations are needed between the health professionals in the hospitals and central authorities to ensure that an awareness of ADR reporting is actually carried out. The low participation in the study and the failure to respond to some questions, especially for the definition of Pharmacovigilance and ADR, may be a consequence of poor knowledge of ADR. Purpose of ADR system was also analyzed in the present study. The study showed a positive attitude of the majority health professional towards ADR reporting. Most of the professionals were of opinion that ADR would identify safe drug and also variations within the same therapeutics class. 150 professionals stated that the ADR reporting will detect future potential ADRs.

Confusion was observed regarding where ADR report should be submitted and who should be responsible for submitting ADR report. This problem could be corrected by simply providing more workshops and more courses by the NPC in SFDA to create a workforce which are qualified as ADRs reporters.

Rockville [11] and Bawazir [9] in their study found that underreported ADR was not by only pharmacists but by other health professionals as well. And the findings were consistant with the present study. Davis and Coulson [12], Bäckström et al. [13] and Toklu and Uysal [14] all of which assessed ADR reporting found that the reluctance to report ADRs included a lack of awareness of the specified medication in causing of ADR. According to Van Grootheest et al. [3], Al-Sultan and Bawazir [15] and Ghosh et al. [1], the awareness and attitudes of the respondents to ADRs may help develop a database of problems and can be utilized for improving ADR reporting system.

The authors would like to thank the Saudi Cultural Bureau for providing a PhD Scholarship for Naif Al-Hazmi and all the health professionals in the Makkah hospitals who gave their time in providing data for this study.

Copyright: © 2013 Al-Hazmi N, et al. This is an open-access article distributed under the terms of the Creative Commons Attribution License, which permits unrestricted use, distribution, and reproduction in any medium, provided the original author and source are credited.