A 34-old-female patient had acute intermittent porphyria. Rare diseases should be considered in the differential diagnosis, especially in young adults. It is hard to recognize the illness in a district hospital, where access to the specialist laboratory tests is difficult. Although non-specific symptoms and attributing them to prior surgical intervention delayed diagnosis, the maintained diagnostic, careful observation allowed for proper diagnosis of the disease.

Hereditary porphyrias are a group of rare, metabolic disorders caused by haem biosynthesis defects. The clinical presentation, severity and prognosis depend on alteration of specific enzymatic step. One of the most common porphyrias is acute intermittent porphyria, inherited in autosomal dominant pattern [1]. It is characterized by overproduction of Aminolevulinic Acid (ALA) and Porphobilinogen Deaminase (PBG) which are neurotoxic. These upstream metabolits are released from the liver to the circulatory system [2,3]. Most of acute attacks present as a combination of abdominal pain, mild psychiatric symptoms and autonomic dysfunction. However, severe attacks can be life threatening and present with seizures and psychosis. Acute attacks might be triggered by specific factors, usually ingestion of drugs metabolized by cytochrome P-450 but also undergoing surgery. The simplest and most specific way to diagnose an acute attack of porphyria is measurement of ALA and PBG levels in patient's urine. Hydration, carbohydrate administration and haem in therapy lead to reduction of ALA and PBG production [4-6].

A 34-year-old female was admitted to the Emergency Department (ED) on 24th of June presenting paresthesia and muscle weakness in the lower extremities. Generalized seizure was observed. The blood pressure was 155/90 mmHg and the heart rate-90 bpm. Physical examination showed a soft, tender abdomen with no peritoneal symptoms in Figure 1. 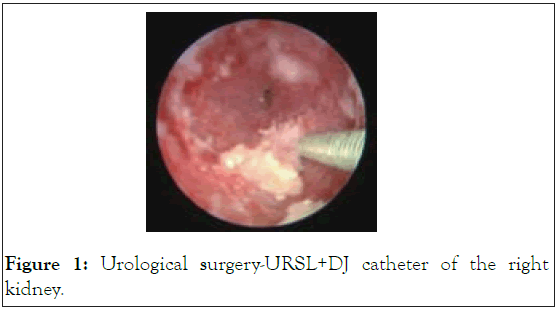 A complete neurological examination was performed. According to the medical history, the patient underwent a recent (on 19th of June) urological surgery-URSL+DJ catheter of the right kidney and since then was presenting a persistent abdominal pain and constipation. Non-steroidal Anti-Inflammatory Drugs (NSAIDs) turned out to be insufficient. Laboratory investigations revealed severe hyponatremia (107 mmol/l). Cerebral oedema most likely caused by low blood sodium level. Due to persistent neurological symptoms, a Computer Tomography (CT) scan of head was ordered. The CT examination revealed a cerebral oedema most likely caused by low blood sodium level. She was admitted to the nephrology department with recommendations for the further hyponatremia treatment. The patient's condition deteriorated rapidly. Despite the implemented fluid therapy, the level of sodium in the blood did not increase. The urine sample turned dark after being exposed to the light. Moreover, hypertrichosis on the patient’s face was noted. The above raised the strong suspicion of porphyria. Urine quantitative determination of Porphobilinogen (PBG) and δ-Aminolevulinic Acid (ALA) was commissioned. The urine test showed an increased excretion of PBG and ALA. Patient with and without critical-ill events where appropriate.

The patient has presented with a complex medical history, coupled with polypharmacy and uncontrolled diabetes, it is important to discuss how these aspects can affect the patient’s oral health.

The increase in the older population has resulted in root caries becoming a more prominent issue, as seen with the patient discussed in this case report. The patient had numerous root caries on the interproximal surfaces, where it commonly presents due to factors such as microbial plaque, poor diet and decreased salivary flow. As this form of dental caries could also occur beneath the gingivae, it can prove difficult for some patients, including people with reduced dexterity like a proportion of the older population, to clean these areas by themselves. Increased risk has also been positively correlated with age and gingival recession, both of which are features of this patient. There are number of other risk factors that contribute to root caries including properties (quality and quantity). It provides key actions in keeping healthy including reducing the solubility of enamel, as well as buffering and neutralising acids ingested through diet and produced by the oral microflora.

To explore the risk factors associated with critical-ill events (intensive care, invasive ventilation, or death), binary logistic regression models were used. The LASSO regression is a machine learning method that suitable for the reduction of high-dimensional data and collinearity. The regression model analysis was performed using the glmnet package of R. The receiver operating characteristic with Area Under the Curve (AUC) was used to determine accuracy. The prediction model that incorporated the independent risk factors was developed and presented as the nomogram. Nomogram was obtained using the rms and regplot packages of R. Demographic, clinical, laboratory, treatment, and outcome data were extracted from electronic medical records using a standardized data collection form. Especially, to avoid the selection bias, we only collect the first routine blood samples after hospitalization. Methods for laboratory confirmation of infection have been described elsewhere [2]. Other types of porphyria, called acute porphyrias, primarily affect the nervous system. These disorders are described as "acute" because their signs and symptoms appear quickly and usually last a short time. Episodes of acute porphyria can cause abdominal pain, vomiting, constipation, and diarrhea. During an episode, a person may also experience muscle weakness, seizures, fever, and mental changes such as anxiety and hallucinations. These signs and symptoms can be life-threatening, especially if the muscles that control breathing become paralyzed. Acute porphyrias include acute intermittent porphyria and ALAD deficiency porphyria. Two other forms of porphyria, hereditary coproporphyria and variegate porphyria, can have both acute and cutaneous symptoms. The porphyrias can also be split into erythropoietic and hepatic types, depending on where damaging compounds called porphyrins and porphyrin precursors first build up in the body. In erythropoietic porphyrias, these compounds originate in the bone marrow. Routine blood examinations were complete blood count, coagulation profile, serum biochemical tests (including renal and liver function, and electrolytes), myocardial enzymes, interleukin-6 (IL-6), C-reactive protein and procalcitonin. This confirmed the initial diagnosis of Acute Intermittent Porphyria (AIP). The patient was transferred to the department of disorders of haemostasis and internal diseases for further treatment. After the symptoms ceased, she was discharged home and remains under the care of the clinic mentioned above.

The diagnosis of AIP is often delayed due to nonspecific symptoms and similarities to other diseases. Clinical presentation, characteristic to porphyria was initially attributed only to recent surgical intervention. This is indeed a trigger for the acute attack. Absence of symptoms in family history does not exclude a diagnosis of porphyria. This disease in 90% of cases has no clinical presentation.

Copyright: © 2021 Wardega Z, et al. This is an open access article distributed under the terms of the Creative Commons Attribution License, which permits unrestricted use, distribution, and reproduction in any medium, provided the original author and source are credited.