Methods: We conducted a prospective study of 204 patients aged 60 or older (median age 73) undergoing cardiac surgery at two academic medical centers. We defined “AF at discharge” as AF that developed after surgery and was present on the day of discharge. We evaluated the prevalence of anticoagulant and antiarrhythmic use at discharge, and out to 1 year post-discharge. We investigated the association between age and prescription of both classes of medications at discharge.

Conclusions:AF persists at hospital discharge in nearly one-third of affected patients. Cardiac surgery results in the initiation of anticoagulant and antiarrhythmic medications in many older patients annually, often concurrently. Our findings underscore the need for additional studies on the natural history of this arrhythmia and clinical trials investigating different management strategies after discharge. Such research will help to inform development of guidelines addressing duration of use for these medications, to aid physicians in these complicated post-discharge management decisions

Despite advances in prophylactic regimens, postoperative atrial tachyarrhythmias remain a common problem after cardiac surgery. Estimated incidence rates range from 20-50% after coronary artery bypass graft procedures, to even higher rates after valvular procedures, making this the most common postoperative complication [1-5].

To our knowledge, there are no studies assessing utilization of these medications in a post-cardiac surgery cohort, or the impact of age and/or atrial fibrillation presence on the day of discharge on medication decisions. In the present study, we sought to define the incidence of postoperative atrial fibrillation persisting on the day of hospital discharge, thereby identifying a group of patients who would warrant consideration of anticoagulant and antiarrhythmic agents, and to assess utilization of these medications at discharge and at several post-discharge time points out to one year.

This is a substudy of a study designed to investigate cognitive outcomes in patients undergoing cardiac surgery [21]. Patients aged 60 or older undergoing coronary artery bypass surgery (CABG), valve surgery (aortic or mitral), or a combination of the two procedures at two major academic medical centers from August 1st, 2002 to June 30th, 2006 were eligible for inclusion. All patients provided written informed consent. Exclusion criteria included living more than 60 miles from the medical center, medical instability that would limit preoperative assessment, additional surgical procedures (including the MAZE procedure), and inability to speak English. Patients whose surgery was canceled or who were found to be delirious on preoperative assessment were also excluded. All patients underwent routine admission electrocardiogram. In order to measure the incidence of new postoperative atrial fibrillation, patients in atrial fibrillation on their admission electrocardiogram were excluded; patients with a history of atrial fibrillation, but who were in sinus rhythm on their admission electrocardiogram, were included. The study was approved by the Institutional Review Board at each institution. Data were collected prospectively via patient interview and comprehensive medical record review performed by an experienced clinician.

To investigate medical practice surrounding postoperative atrial fibrillation, we recorded medications prescribed on discharge via chart review. To investigate the longer-term medication utilization associated with postoperative atrial fibrillation we recorded medications prescribed at two post-discharge time points – 1-3 months and 12 months. Medication use was assessed via patient interview during home visits. Patient self-report was then confirmed by direct review of the pill bottles in the home setting.

Antiarrhythmic medication was defined as amiodarone, sotalol, propafenone, procainamide, dofetilide, flecainide, disopyramide, and quinidine. For anticoagulant therapy, enoxaparin and fondaparinux were not utilized in our cohort; therefore, we simplified our definition to refer only to warfarin.

The proportion of patients with any new postoperative atrial fibrillation and the proportion with this rhythm present on the day of discharge were analyzed descriptively; 95% confidence intervals for all proportions were calculated using a 2-sided type-1 error of 0.05.

For the follow up analysis, we describe the proportion of patients on warfarin and antiarrhythmic medication at the time of hospital discharge, at 1-3 months, and at 12 months, also stratified by atrial fibrillation status at discharge. Patients who died prior to discharge were excluded from the medication analysis. Patients started on warfarin or antiarrhythmic medication for reasons other than atrial fibrillation at the time of discharge were also excluded from the medication analysis. 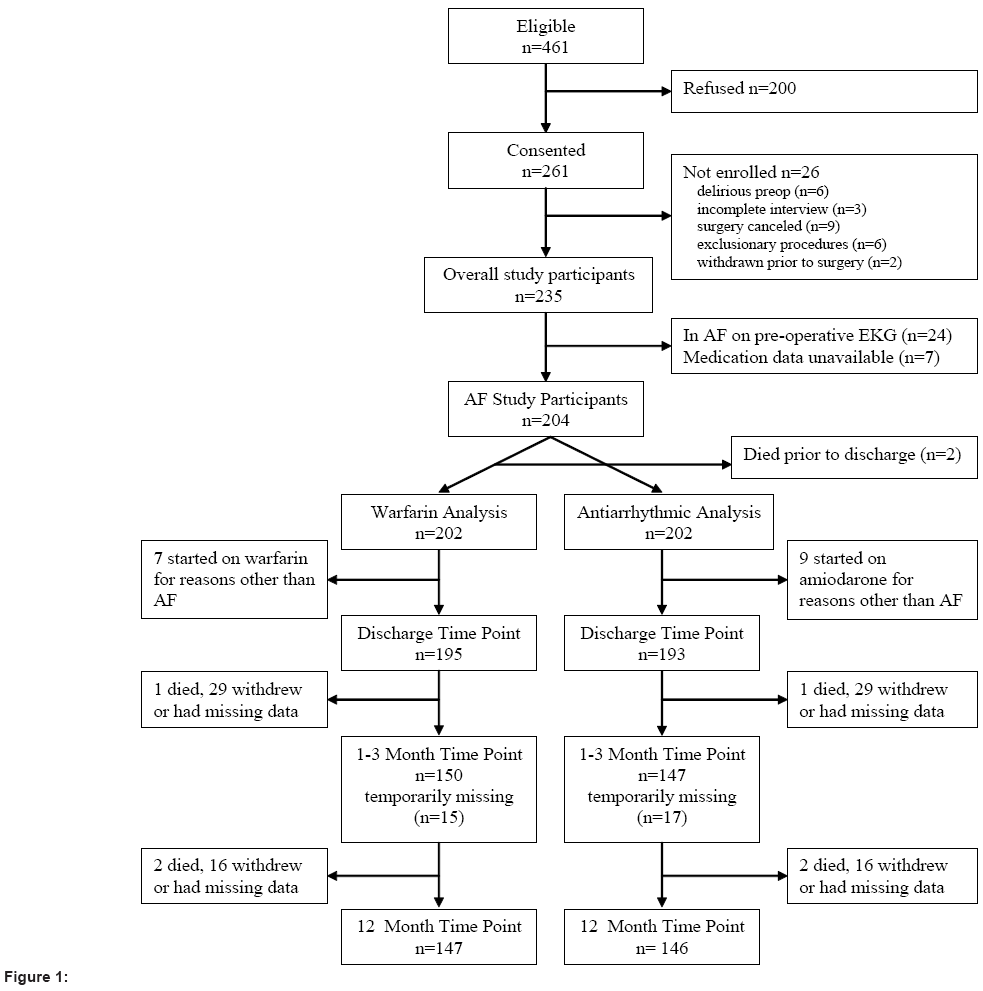 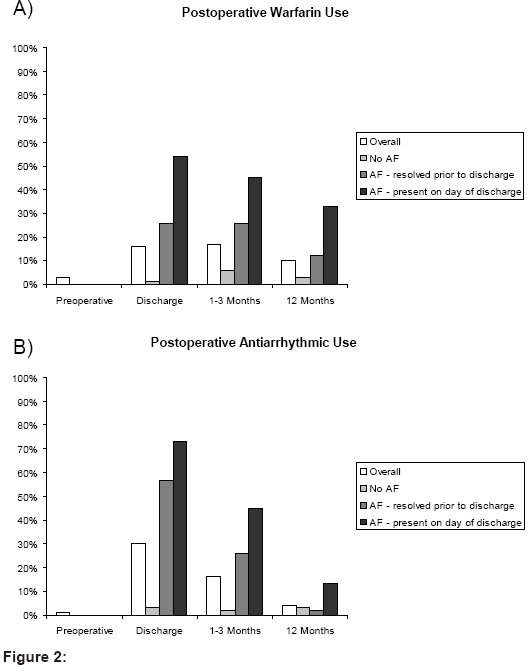 Atrial fibrillation remains a highly prevalent complication after cardiac surgery, occurring in 45% of this cohort of older patients from 2 academic medical centers and persisting at the time of discharge in 31% of these patients. The observed rates of anticoagulant and antiarrhythmic medication utilization on discharge illustrate the substantial long-term treatments and costs associated with this postoperative complication. Our finding that 25 percent of patients with postoperative atrial fibrillation were discharged on both warfarin and an antiarrhythmic agent, the majority of whom were older than 72 years of age, further underscores the need for clear, evidencebased recommendations surrounding duration of use and monitoring of patients on these medications. Taken together, our findings draw attention to the great need for additional research on the natural history of this arrhythmia and clinical trials examining different management strategies after discharge, to inform decision analyses weighing the risks and benefits of medical treatment of this arrhythmia, especially for older patients in whom both the benefits and risks of treatment may be greater.

Our finding that 62% of patients with postoperative atrial fibrillation were discharged on antiarrhythmic medication, and that older patients were as likely as younger patients to receive such treatment has important implications. With the success of amiodarone at preventing postoperative atrial fibrillation when used prophylactically [22,23], and with increased comfort surrounding its use, it is not surprising that amiodarone is commonly used in this patient population. However, amiodarone is not without risk in older patients, who were as likely as younger patients to be prescribed antiarrhythmic medication at the time of discharge. Increased fat mass with aging can prolong the halflife of lipophilic drugs such as amiodarone, potentially increasing the risk for cardiac and non-cardiac side effects [16,24]. The 2003 update of the Beers criteria for potentially inappropriate medication use in older adults added amiodarone to the list of medications to avoid [25,26]. Even more concerning is our finding that of the 22 patients discharged on both warfarin and an antiarrhythmic agent, 18 were older than 72 years of age. Amiodarone may enhance the anticoagulant effect of warfarin, representing a clinically important drug-drug interaction, particularly for elderly patients in whom pharmacokinetics and pharmacodynamics of drugs are already altered due to a multitude of factors.

Unfortunately, older patients are also at higher risk for stroke [10,27], as well as complications related to anticoagulation, making decisions surrounding these postoperative medical treatments even more complicated [28-30]. Our findings draw attention to the great need for large prospective studies and clinical trials to help inform decision making in this realm. More specifically, while postoperative atrial fibrillation is generally thought to be a transient phenomenon, few studies have actually examined the natural history of postoperative atrial fibrillation after discharge [17-20], and none have examined the efficacy of postoperative amiodarone at restoring or maintaining sinus rhythm after discharge – both crucial pieces of the risk-benefit analysis. Additionally, there is little guidance related to possible testing to be performed before discontinuation of warfarin or amiodarone, such as an in-office electrocardiogram or holter monitoring. In our study, use of warfarin and antiarrhythmic medication at 1-3 months and 12 months after surgery still had not returned to pre-operative levels. This finding warrants further investigation in a sufficiently powered study aimed at elucidating whether this represents persistence of the rhythm, new onset or recurrence of atrial fibrillation, or failure of outpatient medication reconciliation. Our findings underscore the need for clinical trials in this area to guide formal recommendations surrounding use and duration of use for these medications.

Our study has several strengths, including the multi-site prospective design, and the detailed medical record review supplemented by patient interview and home visits. There are also several limitations. First, the relatively small sample size limited our statistical power and ability to investigate outcomes associated with atrial fibrillation, such as stroke. Second, our lack of data on rhythm status after discharge prevented us from drawing conclusions related to the appropriateness of medication utilization at post-discharge time points. Finally, studies demonstrating the effectiveness of amiodarone at decreasing the incidence of postoperative atrial fibrillation were largely published towards the end of our study period. Thus, the current rate of antiarrhythmic use may be underestimated, further emphasizing the need for formal recommendations addressing duration of use.

In conclusion, consistent with prior studies, we found that atrial fibrillation is common after cardiac surgery, and persisted at the time of hospital discharge in nearly one-third of those affected. The substantial utilization rates of anticoagulant and antiarrhythmic medications at the time of discharge in this older patient population draw attention to the need for further studies on the natural history of this arrhythmia and clinical trials examining different management strategies after discharge. Such research is imperative for development of guidelines for tailoring medical management of this common postoperative complication, especially for older patients in whom both the benefits and risks of treatment may be greater.

None of the authors have any financial or non-financial competing interests.

This study was funded in part by grant number T32HP11001 from the Health Resources and Services Administration of the Department of Health and Human Services to support the Harvard Medical School Fellowship in General Medicine and Primary Care, and in part by the following grants from the National Institute on Aging: P60AG008812 (the Harvard Older Americans Independence Center), R01AG030618 and R03AG028189. Dr. Marcantonio is supported by a Midcareer Investigator Award in Patient-Oriented Research from the National Institute on Aging (K24AG035075). Dr. Rudolph is funded by a VA Rehabilitation Research Career Development Award. Dr. Ngo is funded by grant number 1 UL1 RR025758- 01 from the National Center for Research Resources to support the Harvard Clinical and Translational Science Center. The funding organizations had no role in the study design; in the collection, analysis, and interpretation of data; in the writing of the manuscript; or in the decision to submit the manuscript for publication.

Copyright: © 2012 Herzig SJ, et al. This is an open-access article distributed under the terms of the Creative Commons Attribution License, which permits unrestricted use, distribution, and reproduction in any medium, provided the original author and source are credited.