Several subsets of regulatory CD4+ T cells (CD4+ Tregs) have been described in peripheral blood and tumor microenvironment of breast cancer (BC) patients and may play a key role in the progression of BC. High-risk human papilloma virus (HPV) have a causal role in a significant proportion of cervical, and head, and neck tumors and may play an important role in evoking neoplasia in BC. In this study we assessed the prevalence of CD4+Tregs (CD4+ CD25+ FOXP3+ cells) and CD3+ CD8+ T cells by flow cytometry in peripheral blood from a total of 55 Egyptian women, including 20 treatment-naïve BC, 15 with breast benign lesions (BBL) and 20 healthy volunteers (HV). Highrisk HPV genotype type 16, 18, and 31 was investigated in breast tissue from all BC and BBL patients using Real- Time PCR. HPV was detected in 4 BC, but in none of BBL patients. The frequency of CD4+ Tregs was significantly higher in BC compared to BBL and HV, (p < 0.001). In addition, we observed a significantly higher frequency of CD3+ CD8+ T cells in peripheral blood of patients with late stage III BC compared to early stage I and II BC (p = 0.011). However, there was no significant association between the ratio of CD8+ T cell to CD4+ Tregs frequencies and the expression of Estrogen Receptor (ER), Progesterone Receptor (PR), and Human Epidermal Growth Factor Receptor 2 (HER2). The potential role CD4+ Tregs as a prognostic or predictive parameter should be analyzed in a larger longitudinal study with sufficient follow-up time.

Breast cancer (BC) is the second-leading cause of death from cancer in Egyptian women. The overall incidence of cancer is 157.0 per 100,000 Egyptian females with the highest incidence being BC (32%) and a 3-fold increase in incidence of cancer is predicted by 2050 [1]. While the etiology of BC is still unknown, numerous risk factors have been identified. Increased public awareness and regular screening can play a vital role in the prevention, early detection and treatment of BC [2]. High-risk human papilloma virus (HPV) has a causal role in a significant proportion of cervical, head, and neck tumors and may play an important role in evoking neoplasia in breast cancer [3].

The expression of hormone receptors such as estrogen receptor (ER) and progesterone receptor (PR) in BC predicts the response to growth factors, patient prognosis, and response to targeted therapy [4]. Patients positive for these receptors tend to have improved prognosis and better response to hormonal therapy [5]. In contrast, BC patients expressing Human Epidermal Growth Factor Receptor 2 (HER2) have increased disease recurrence and poor prognosis [6]. Triple negative breast cancer is a unique subtype constituting about 20% of breast cancer cases is characterized by the lack of ER, PR, and HER2 expression and poor clinical outcome [7,8]. Metaplastic carcinoma is an aggressive type of BC characterized by low hormone receptor expression and poor prognosis [9].

Several subsets of regulatory CD4+ T cells (CD4+ Tregs) have been described in peripheral blood and tumor microenvironment from breast cancer patients with invasive high-grade breast carcinomas, and may play a key role in the progression of breast cancer expression [10-14]. CD4+ Tregs express high levels of FOX P3, CD25, Glucocorticoid-induced TNFR family related protein (GITR), Cytotoxic T-lymphocyteassociated protein 4 (CTLA-4), and CD103 [15-17]. In addition, decreased expression of CD127 on human CD4+ Tregs is inversely correlated with FoxP3 expression [18,19]. Naturally ” occurring CD4+ Tregs are derived in the thymus, while “Adaptive” CD4+ Tregs are believed to come from mature T cells in the periphery under specific conditions of persistent antigenic stimulation [20]. CD4+Tregs exert their non-antigen specific inhibitory effects on T cell proliferation and cytokine production through a cell-cell contact-dependent mechanism [21,22]. These cells have also been shown to inhibit the cytotoxic function and decrease the expression of major histocompatibility class I molecules on target cells. CD4+ Tregs were shown to secrete immunosuppressive cytokines interleukin-10 and Transforming Growth Factor-β (TGF-β) that suppress the induction of antitumor immunity [23,24].

Population and source of samples

All women over the age of 18 visiting the oncology clinic at Al- Azhar university hospital were invited to volunteer in the study. All new cases of histologically confirmed BC were enrolled. Women that were diagnosed with benign breast lesion, as well as women residing in the same areas and admitted to the hospital, for a wide spectrum of acute, non-neoplastic conditions unrelated to known or likely risk factors for breast cancer were invited to volunteer as controls in the study. Women with gynecological, hormonal or neoplastic diseases were excluded from the study. Peripheral blood and frozen breast tissue samples were collected according to the ethical regulations at Al- Azhar university hospital. Demographic and clinical information was obtained from medical records. The study received approval from the Institutional Review Board at Al- Azhar University. Specimens were collected from 20 treatmentnaïve women with primary BC, 15 benign breast lesions (BBL), and 20 healthy volunteers (HV) after providing informed written consent. To avoid a potential influence of major surgical procedures, as well as of neoadjuvant treatment, blood was drawn after core biopsy but before definitive surgery.

HPV DNA detection and typing were carried out using the “ Advanced HPV high- risk Detection and Typing PCR kits (genesig, England), following manufacture protocol. Three high risk HPV types; 16, 18, and 31 were investigated. Each Kit is an in vitro Real -Time amplification test for qualitative detection of HPV specific genotype. It is based on two major processes: isolation of DNA from specimens and Real Time amplification of the E1 – E2 region of HPV. The β-globine gene was used as an internal control. The PCR samples were analyzed by the “ One step PlusTM Real Time PCR System with Notebook Computer from Applied Biosystem.

Statistical analysis was done using IBM SPSS® Statistics version 23 (IBM® Corp., Armonk, NY, USA). Numerical data were expressed as mean and standard deviation or median and range as appropriate. Qualitative data were expressed as frequency and percentage. For not normally distributed quantitative data, comparison between two groups was done using Mann-Whitney test (non- parametric t-test). All tests were two-tailed. When more than two groups of data sets were compared, one-way analysis of variance (ANOVA) was performed as described. A pvalue < 0.05 was considered significant.

The mean age of patients with BC, BBL, and HV was 50.6+11.7, 55.0+13.7, 64.3+9.9 respectively (Table 1). There was no significant difference in age between patients with BC compared to BBL (P = 0.188). HPV type 16 and 18 was detected in breast tissue from 4/20 BC patients compared to 0/15 of BBL patients and none of the healthy volunteers. Metaplastic carcinoma and invasive duct carcinoma were found in 3/4 (75%) and 1/4 HPV infected patients respectively compared to 0/15 and 13/15 HPV negative BBL patients respectively. These results suggest that HPV infection may be associated with more aggressive BC in Egyptian women. Ten of 20 patients with BC (50%) were diagnosed with early stage disease (stage I and II) while 6/20 (30%) were diagnosed with advanced disease (stage III).

Table 2: Frequency of CD4+ Tregs and CD8+ T cells in BC patients according to age, HPV, and tumor characteristics.

We characterized CD4+ Tregs by the expression of CD4, CD25, and FOXP3 [15]. Representative plots of the gating and frequency of frequency of CD4+ Tregs are shown in Figure 1. We observed a significantly higher frequencey of CD4+ Treg in patients with BC compared to BBL and HV (p<0.001; Table 1). In contrast, there was no significant difference in the total percentage of CD8+ and CD4+ T cells between the three groups (Table 1). Tumor-infiltrating CD8+ T lymphocytes in BC patients were reported to have antitumor activity resulting in a favorable effect on patients ’ survival [33]. Decreased number of tumor infiltrating CD8+ T cells in BC was significantly associated with lymph node metastasis and a higher disease stage. In this study we observed a significantly higher frequencey of CD8+ T cells in peripheral blood of patients with late stage III compared to early stage I and II BC (p = 0.011; Figure 3A). In contrast, there was no significant difference in the frequency of CD4+ T cells (Figure 3B; P = 0.792) or CD4+ Tregs (Figure 3C; P = 0.972) between early compared to late stage BC patients. In addition, there was no significant association between the ratio of CD8+ T cell to CD4+ Tregs frequencies and the expression of ER, PR, or HER2 (data not shown). The prognostic role of CD8+ T cell frequency as a prognostic marker in BC is not well defined and should be assessed in a large prospective study. 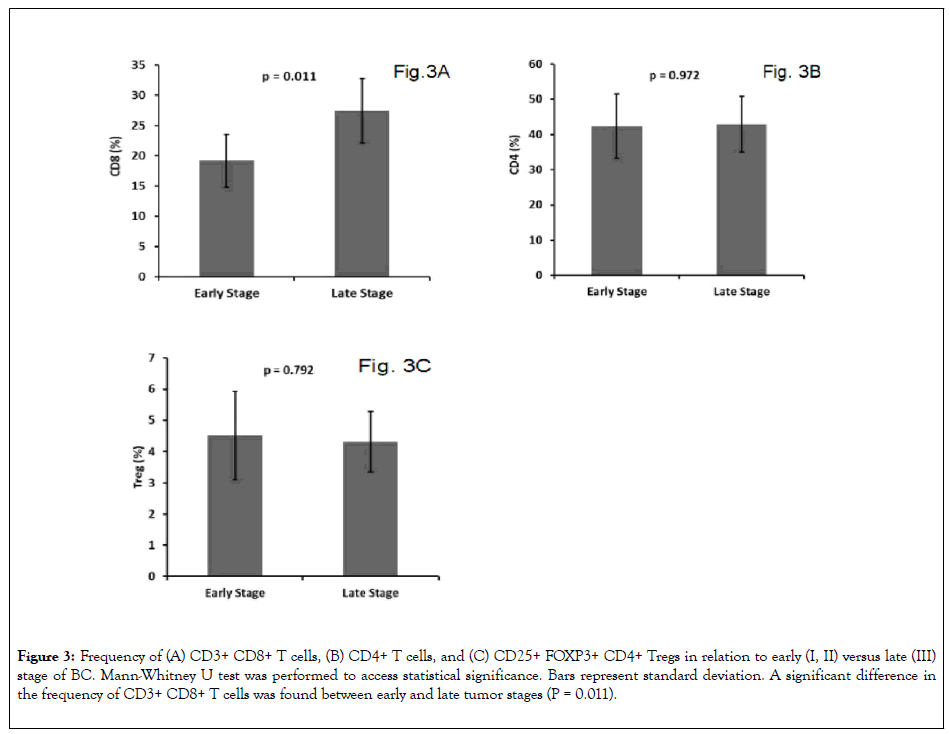 Figure 3: Frequency of (A) CD3+ CD8+ T cells, (B) CD4+ T cells, and (C) CD25+ FOXP3+ CD4+ Tregs in relation to early (I, II) versus late (III) stage of BC. Mann-Whitney U test was performed to access statistical significance. Bars represent standard deviation. A significant difference in the frequency of CD3+ CD8+ T cells was found between early and late tumor stages (P = 0.011).

The adaptive immune system plays an important role in BC development and prognosis. Cytotoxic CD8+ T lymphocytes and CD4+ T helper cells may promote tumor eradication. In contrast, CD4+ Tregs have an immunosuppressive effect that may promote tumor growth and progression of BC. In addition, heterogeneous expression of hormone receptors and growth factors in BC affects patientspecific adaptive immune responses [34]. In this study we assessed the prevalence and prognostic value of CD4+ T regs and CD8+ T cells in Egyptian females with breast cancer. We observed a significantly higher frequency of CD4+ Tregs in patients with BC compared to BBL and HV. These results suggest that the composition of T cell subsets in peripheral blood of Egyptian patients with BC may favor an immunoregulatory phenotype that is distinct from BBL and HV. Our finding is consistent with previously reported analysis of freshly isolated lymphocytes from normal and malignant breast tissue samples [35].

We assessed the histologic grade and disease stage as variables to gain further insight into the relationship between the frequency of CD4+ Tregs and tumor biology. In addition, we analyzed the frequency of CD4+ Tregs among clinically defined surrogates of BC molecular subtypes for ER+, Her2+, and triple negative BC in order to explore whether any particular clinical disease correlates were associated with increased number of CD4+ Tregs. Increased CD4+ Tregs frequency was associated with poor prognostic characteristics such as higher histological grade, lymph node metastasis [15,36,37].

We observed no significant increase in frequency of CD4+ Tregs in BC patients with poor prognostic characteristics such as higher histological grade, lymph node metastasis, and presence of high-risk HPV which may be due to the relatively small number of patients in the study. Increased number of CD4+ T regs was reported in the peripheral blood of patients with Her-2/neu-positive early breast cancer [10]. However, concurrent HPV infection and increased CD4+ Treg frequency did not seem to influence BC prognosis [38]. We postulate that circulating CD4+ Tregs could be used as a prognostic or predictive parameter in Egyptian women with BC and should be assessed in a larger longitudinal study with sufficient follow-up time.

It has long been hypothesized that hormone dependent oncogenic viruses, such as HPV may have causal roles in some cancers [39]. Expression of high risk HPV DNA in BC and HPV proteins in cervical cancer was recently reported [40,41]. In this study, we demonstrated the presence of high-risk HPV in the tissues of 20% of breast cancer specimens. These results suggest a possible causal role for high-risk HPV in Egyptian women with BC and potential prevention of some breast cancers by HPV vaccination [3].

The study received approval from the Institutional Review Board at Al-Azhar University.

The datasets used and/or analyzed during the current study are available from the corresponding author on reasonable request.

This work was funded by the Science and Technology Development Fund (STDF), Egypt. Grant # 22914

AT, AM, and AO acquired, analyzed, and interpreted the patient data. MM performed statistical analysis. AT, NE, and ME were major contributors in writing the manuscript. All authors read and approved the final manuscript.

Copyright: © 2020 Tawfeik AM, et al. This is an open-access article distributed under the terms of the Creative Commons Attribution License, which permits unrestricted use, distribution, and reproduction in any medium, provided the original author and source are credited.