Objective: The aim of this prospective, double-blind, randomized, placebo-controlled clinical trial was to investigate the opioid-sparing effects of orally administered celecoxib following total abdominal hysterectomy. Methods: The study population consisted of 52 patients scheduled for total abdominal hysterectomy (TAH) who were ASA I or II physical status females. Patients were allocated randomly to orally receive 400 mg of celecoxib (Group C, n = 26) or placebo (Group P, n = 26) 1 hour before anesthesia induction. All patients underwent the same standard general anesthesia with oral intubation. Morphine was self-administered for postoperative analgesia via a patient controlled analgesia (PCA) device. Results: Only 1 patient did not complete the study. Of the remaining 51 patients, there was no significant difference between the treatment groups in age, weight, ASA status, duration of surgery, or intraoperative dose of morphine. However, the mean (95% CI) 24 h morphine consumption of 17.5 (11.9, 23.2) mg in the celecoxib group was not significantly lower than that of 24.2 (18.6, 29.7) mg in the placebo group (P=0.089). There were no significant differences between groups in morphine consumption, initial analgesic requirement, and numeric rating scores for pain at rest or on movement, nausea or sedation during the first 24 hours after operation. Conclusion: We conclude that preemptive celecoxib did not confer additional analgesia in patients undergoing total abdominal hysterectomy.

Anesthesia induction and postoperative pain always affect recovery [1]. Total abdominal hysterectomy is usually performed by Pfannenstiel incision, which leads to post operative pain that requires pain releasing medication usually in opioid group, especially given during 24-48 hours after operation [1-3]. Patients normally receive opioid treatment during operation, and it is known that high dosages of opiates result in complications, for example, difficult inhalation, drowsiness, nausea, itchiness, uroschesis, constipation, flatulence, which extend the time before discharge [4]. These complications can be exacerbated by opioid drugs, but the patient will suffer from post operative pain. Thus, integrated treatment of post operative pain has been suggested by reducing the use of opioid and giving nonopioid analgesics instead such as nonsteroidal anti-inflammatory drugs, NSAIDs which can stop pain in areas where opiates cannot. NSAIDs suppress prostanoid enzyme and reduces pain and complications that could occur if opioid drugs are used [5,6]. However, NSAIDs also suppress COX1 which controls the equilibrium of tissues while COX2 lessens pain and inflammation. When COX1 is suppressed, complications can result such as platelet dysfunction and peptic ulcers. At present, there are nonsteroidal anti-inflammatory drugs that specifically affect only COX2, such as celecoxib. The action is on COX2 and COX1 in the proportion 375 to 1 [7], which lessens inflammation and pain, and at the same time reduces complications in the gastrointestinal tract (such as peptic ulcers). This is common in old nonsteroidal anti-inflammatory drugs. Celecoxib is well accepted for pain in osteoporosis and rheumatism since it does not affect platelet function. For patients receiving tooth pulling procedures under local anesthesia, celecoxib is found to be more effective than aspirin [8]. Previous studies suggested prescribing 400 mg of celecoxib before oral surgery [9], ambulatory surgery [10], and anterior cruciate ligament reconstruction surgery; which would lessen postoperative pain [11]. No study has been conducted in prescribing 400 mg celecoxib in total abdominal hysterectomy. This study was therefore aimed at studying the results of celecoxib per dosage of morphine by patient-controlled analgesia. Pain during resting and moving when the patient needed analgesic drugs for the first time after operation and complications from morphine and celecoxib were also investigated.

The study was based on a randomized double-blind, placebocontrolled method and conducted on female patients receiving total abdominal hysterectomy at the operation room of Srinagarin Hospital. All patients gave their signatures of consent to participate in the project after approval from the Human Research Ethics Committee, Khon Kaen University (Project Number i510064Por.). The inclusion criteria applied were ages between 18-65 years, ASA class I-II, and ability to use patientcontrolled analgesia (PCA). Exclusion criteria were pregnant patients or breast-feeding patients, ingestion of any analgesic drugs within 24 hours before operation, allergies to any medicine in this research, using addictive drugs, having abnormalities of the cardiovascular system, kidney, liver, or gastrointestinal tract.

The population under study totaled 52 patients from the previous study of patients receiving total abdominal hysterectomy [12]. The population was divided into two groups of 26 patients. It was found that the need for morphine 24 hours after operation was at an average of 56 mg. The standard deviation of morphine was 17.8 mg. In the research, 90% of power of the test was expected where post operative morphine requirements would be reduced at 30% or an approximate effect size of 16.8 mg when the patients had received preoperational celecoxib compared to the group receiving placebo analgesia ( p=<0.05). In case of intraoperative complications or complications from analgesia, the “Intention to treat” principle was applied to analyze the number of patients. In addition, loss of patients from the research was calculated at 5 percent.

Before operation, all patients received instructions on how to operate the patient-controlled analgesia (PCA) and evaluate pain levels from 1-10. They had to refrain from food and water for 8 hours before operation. The patients were divided into 2 groups by computer-block random sampling. Two to eight blocks were used for sampling patients for medication. The sampling ratio was 1:1. STATA program was applied to assign treatment procedures. All of the sampling and treatment were carried out by personnel not involved in the research. Treatment procedures were put in opaque, sealed envelopes. Each envelope was opened when patient sampling for treatment began. Group P was given placebo analgesia, while Group C received 400 mg celecoxib 1 hour before operation. The patients were not made aware of their prescribed drug. Later, all of the patients received the following general analgesia according to the standard set:

Morphine at 1 mg/ml was contained in 50 ml bag in patient-controlled analgesia (PCA) for post operative painkilling. Morphine dosage, number of times the patient pressed for drug, and the real amount obtained during each hour were recorded.

After operation, each patient was visited by the anesthetic nurse team at the 2nd, 6th, 12th, and 24th hours. The team was not informed of patients’ grouping or drug prescription under the research. If a patient vomited, had much nausea, and could not tolerate the nausea, 4 mg of intravenous ondansetron was given. This treatment could be repeated every hour if the patient did not improve. Each patient received standard acute pain service through surveillance and treatment if complications occurred, all of which were under physician’s order. The service comprised, for example, caring and observing pain, respiratory depression, sleeping condition, nausea, vomiting, and surveillance for celecoxib complications, and reporting to physicians.

Outcome of the study

Patients’ data collection was conducted by anesthetic nurses who were not involved in patient sampling in the research. The anesthetic nurses evaluated the patients at the 2nd, 6th, 12th, and 24th hours after operation.

Morphine dosage used at the 2nd, 6th, 12th, and 24th hours after operation was recorded by the patient-controlled analgesia.

Post-operative abdominal pain at the 2nd, 6th, 12th, and 24th hours was assessed during rest and when the patient moved (from sitting to sleeping, or from sleeping to sitting). The level of pain was assessed in scores from 0-10: 0 meant no pain and 10 meant the greatest pain in the patient’s life.

Sleepiness and sleep was assessed by 4 ratings. 0 was well awake, 1 was feeling sleepy but did not sleep, 3 was sleeping but awake if greatly stimulated, 4 was sleeping and not awakened by stimulation. The patient was considered sleepy or sleeping when the score was higher than 2 [13].

Nausea and vomiting were assessed as yes or no event [14].

The fundamental clinical patient record analyzed in this research included age, weight, height, BMI, anesthetic duration, and intraoperative dosage of morphine. Data were calculated into means and standard deviations. Categorical data such as ASA status were computed in percentages.

The analyses of data for the study were conducted on the morphine amount received from the patient-controlled analgesia, the hour the patient needed morphine for the first time, and pain during rest / movement. An unpaired t-test was applied for normal distribution data, whereas a Mann-Whitney U test was used for non-normal distribution data. The levels of post-operative sleepiness, sleep, nausea, vomiting, and complications from celecoxib were analyzed by a Chi-square or Fisher’s exact test.

One patient was discharged from the study because no patient-controlled analgesia equipment was available for this patient. The remaining number was 51 patients. The demographic data were not different between the two groups in terms of age, weight, ASA status, operation length, amount of intraoperative morphine received (Table 1). 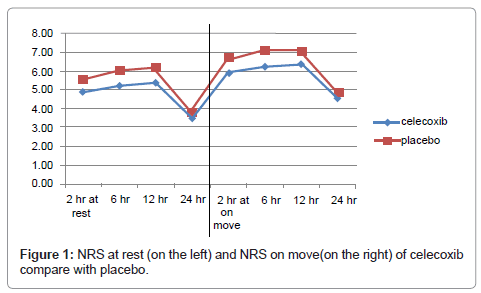 Figure 1: NRS at rest (on the left) and NRS on move(on the right) of celecoxib compare with placebo.

Values were shown as n(%)

Prescribing 400 mg of celecoxib before total abdominal hysterectomy in this study could reduce an insignificant amount of morphine the patients received from patient-controlled analgesia. The period before the first time the celecoxib group asked for painkiller was insignificantly longer than the period before first time the placebo analgesia group asked for it. The celecoxib group showed less pain during rest and when moving than the placebo analgesia group without any significant difference.

In this study, one group of patients were prescribed 400 mg celecoxib one hour before total abdominal hysterectomy and compared to another group that was given placebo analgesia. The main purpose was to assess the total amount of morphine given through patient-controlled analgesia 24 hours after operation. The findings indicated that prescription of 400 mg celecoxib could reduce 18.92 mg and 23.88 mg of postoperative morphine needed in the group prescribed celecoxib and in the placebo analgesia group, respectively. The difference, however, was not statistically significant (p = 0.212). Furthermore, the period before the patients in the first group asked for analgesic drugs for the first time was insignificantly longer than in the second group. The pain occurring during rest and movement of the celecoxib group was insignificantly less than the placebo analgesia group. It could be explained that, firstly, the anticipation of morphine requirement might have been too high. Since the population size to be included in the research was a low number, the statistical confidence values showed no statistically significant differences. Secondly, because celecoxib has an 11-hour effect, medication was administered twice daily. We believe that in order to obtain a good effect, celecoxib might have to be given within the first 12 hours after the first drug administration. Finally, the type of operation, total abdominal hysterectomy, usually results in moderate pain. This was different from previous studies [9,10], which were oral surgery [9] and ambulatory surgery [10], both of which bring mild pain. This might result in a higher need for analgesic drugs after operation in our study.

In this study, sleepiness/sleep, nausea, vomiting were not significantly different and correlated to the study by Klein et al. [15] who studied the effect of bupivacaine injection on hysterectomy wound and found no differences in postoperative morphine needs between the experiment group and the control group. Moreover, sleepiness/sleep, nausea, vomiting were not different between the two groups. Complications from celecoxib were not found in patients participating in this research.

Preoperative oral celecoxib before total abdominal hysterectomy could not reduce the amount of morphine needs within the first 24 hours after operation when compared to placebo analgesia.

Copyright: © 2012 Chau-In W, et al. This is an open-access article distributed under the terms of the Creative Commons Attribution License, which permits unrestricted use, distribution, and reproduction in any medium, provided the original author and source are credited.