We report a case of 84 years old lady who was admitted to our acute stroke unit with two episodes of tingling and numbness in left arm over last seventy two hours. Magnetic Resonance Imaging (MRI) showed right posterior parietal infarction. Subsequent carotid vascular imaging confirmed right internal carotid artery and right brachiocephalic significant stenosis. Her case was discussed in stroke/vascular surgery multidisciplinary team meeting and than with interventional radiology team at one of our tertiary referral centres and she was transferred. She underwent retrograde angioplasty with stent insertion at right brachiocephalic origin. Carotid endarterectomy was deferred as a preprocedure carotid angiogram showed right internal carotid artery stenosis of less than 50%. She made very good recovery with no complications and was discharged from hospital on day seven.

Multilevel atherosclerotic disease involving origin of bracheocephalic artery and ipsilateral internal carotid artery is uncommon, but can lead to therapeutic dilemma when it comes to management decision making for treating physician and surgeons. A recently devised single stage procedure with carotid enarterectomy and retrograde stenting is becoming a more popular choice, as it is least invasive and carries less morbidity and mortality.

Eighty four years old lady was referred to acute stoke team by our emergency department. She presented with two episodes of tingling and numbness across her left whole arm over last seventy two hours. Each episode lasted for fifteen to twenty minutes with complete resolution of symptoms. Her past medical history included hypertension and hypercholesterolemia. She was on aspirin 75 mg, simvastatin 20 mg, felodipine 5 mg and perindopril 2 mg. She was living alone and her pre-morbid modified Rankin score was zero. She used to smoke in past but stopped about 35 years ago.

On admission her systemic and detailed neurological examination was completely normal. She was diagnosed with Transient Ischemic Attack (TIA) and on risk stratification ABCD2 her score was 3 (low risk), but as her symptoms happened twice over last seventy two hours so she was admitted to acute stroke unit as high risk Transient Ischemic Attack (TIA). On day of her admission she had an MRI scan of her brain that showed a right posterior parietal infarction on DWI sequence (Figure 1). On the same day she had a carotid Doppler scan that showed peak systolic velocity of 8.6 cm/sec and end diastolic velocity of 6.4 cm/ sec in right common carotid artery and peak systolic velocity of 28.1 cm/sec and end diastolic velocity of 10.4 cm/sec in right internal carotid artery with monophasic flow pattern (Figure 2). Computed Tomogram Carotid Angiogram (CTA) was performed which confirmed heavily calcifies aortic arch with significant stenosis of right brachiochephalic artery at its origin and also a second long segment of circumferential narrowing of the calibre of the right internal carotid artery just after bifurcation (Figure 3). 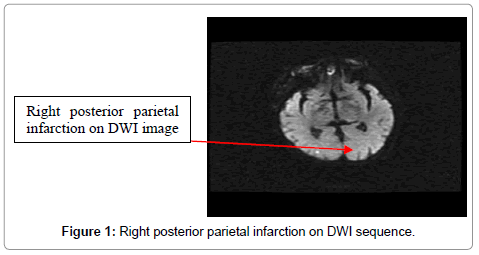 Her case was discussed in detail in our stroke/vascular surgery multidisciplinary meeting and her images were linked to interventional radiology department at our tertiary referral centre. During this period she had two further episodes of left arm tingling that lasted for fifteen minutes each and each resolved completely. A single stage intervention was planned and she was transferred once all arrangements were in place. She had balloon angioplasty of proximal stenosis (right brachiocephalic artery) via a retrograde approach just below right common carotid artery bifurcation after application of neuroprotection in form of right internal carotid artery clamp. After successful angioplasty a stent was inserted (Figure 4). Right internal carotid artery stenosis was not operated as a preoperative angiogram confirmed it to be less than 50% stenosis.

Following intervention she made a very good recovery and was discharged home on day seven. She was followed up in our out patient clinic in three weeks. Clinically she was well. She had a carotid Doppler scan that showed that there was a good flow (PSV 66.9 cm/sec) in the right common carotid artery. There was plaque noted in the right bulb as well as at the origin of the right internal carotid artery but not causing flow limitation (Figure 5).

Figure 5: Plaque noted in the right bulb as well as at the origin of the right internal carotid artery but not causing flow limitation.

Atherosclerotic plaque formation with development of a high grade stenosis at major branches of aortic arch (brachiocephalic and left common carotid artery) is less frequent finding on clinical and radiological examination than typical location of carotid bifurcation and proximal internal carotid artery. Carotid endarterectomy is an accepted and most commonly performed procedure for high grade (more than 50% NASCET) stenosis of carotid artery in all symptomatic and selected asymptomatic patients [1-3]. Multilevel atherosclerotic lesions in bracheocephalic artery or common carotid artery and ipsilateral internal carotid artery are less common finding. Literature has shown its incidence around 4.8% [4]. Presence of two lesions on same side increase risk of ischemic neurovascular event and haemodynamic compromise as any one plaque can be source of thromboembolism. No diagnostic technique can identify which lesion is symptomatic.

Due to location of proximal lesion within chest wall open surgical intervention is not a popular choice as it needs sternotomy, exposure of great vessels and anatomical reconstruction. An alternate is endovascular treatment in form of stenting, but anterograde crossing of tight aortic arch osteal lesions via brachial or femoral approach carries a significant risk of periprocedural embolic event before neuroprotection is applied [5].

As per basic haemodynamic principle if there are two lesions in one system proximal has to be treated first [6]. Deitrich devised a very good single stage technique for treating both lesions simultaneously. This involves opening of common carotids artery just below bifurcation after neuroprotection and insertion of guide wire to proximal lesion, performing retrograde angioplasty and placing a stent followed by carotid endarterectomy [7].

Tandem lesions of brachiocephalic or common carotid artery and ipsilateral internal carotid artery are more and more diagnosed due to better quality imaging facilities (CT and MRI scans). Older surgical techniques carried a very high mortality rate 0.5 to 2.2% for extra anatomical bypass and 6-19% for open thoracic approach [8-11]. This newer single stage hybrid procedure has shown good results in both peri operative morbidity and mortality and long term follow up [1], also the angioplasty site has been noted to be patent more than 85% over five year follow up [12].

Copyright: © 2013 Shoaib RF, et al. This is an open-access article distributed under the terms of the Creative Commons Attribution License, which permits unrestricted use, distribution, and reproduction in any medium, provided the original author and source are credited.