Proceedings of 5th International Conference on Epigenetics and Human Diseases

The Autonomic Nervous System (ANS) is the part of the nervous system, which acts largely at the unconscious level by supplying the glands, organs, and smooth muscle. As a consequence, the system plays an important role in controlling bodily functions including heart rate, blood pressure, respiration, body temperature, gastrointestinal motility, and urinary excretory functions [1]. ANS is divided anatomically and functionally into sympathetic and parasympathetic divisions, which often have opposing effects and a balance of their activity is required for the proper function of an organ [2]. Both sympathetic and parasympathetic divisions are composed of preganglionic and postganglionic neurons, where the neurotransmitters act by binding to receptors at the target area. Autonomic nerve dysfunctions are known to induce postural hypotension, syncope, and sweating abnormalities [3,4]. Alteration of autonomic balance could be an important risk factor for chronic diseases including cardiovascular and neurological diseases due to its important regulatory functions on those systems [5,6]. Moreover, both sympathetic and parasympathetic responses decline, and cardiovascular and neurodegeneration risk increases with aging [7,8]. These findings suggest a relation of autonomic balance with those disease pathologies, and restoration of such imbalance could provide some protection during the processes.

To evaluate changes of autonomic functions, several noninvasive tests are developed. These testing procedures rely on the response of the autonomic system against various types of maneuvers, thus specific test can provide information on a specific aspect of the autonomic system [9,10]. Among the tests, the Head-Up Tilt Test (HUTT) is important, because it is a standardized test that can be used to evaluate cardiovascular regulation of both sympathetic and parasympathetic systems [11]. Here, the subjects are tilted to 60° angle from the supine position to induce a shift of blood volume due to gravity, and autonomic response to that shift is evaluated by recording heart rate and blood pressure [12]. However, evaluation of overall changes in blood pressure and heart rate might not provide the precise status of autonomic regulation. Heart rate is regulated through the innervation of the sinoatrial node with both sympathetic and parasympathetic nerves. Although both parasympathetic and sympathetic nerves exert opposite action on the heart, the effects are not symmetrical physiologically resulting in variability of heart rate or RR interval in the ECG [13,14]. Three major components of RR interval have been recognized [15,16], where oscillation frequencies centered around 0.04 Hz (Very Low Frequency: VLF), 0.1 Hz (Low Frequency: LF) and 0.25 Hz (High Frequency: HF). Similarly, arterial pressure also shows the LF and HF components of variability [17]. Such an analysis of the variability of heart rate and blood pressure may allow a more detailed interpretation of autonomic function. Indeed, in a previous report, we have shown the usefulness of the incorporation of such spectral analysis of heart rate and blood pressure variability with HUTT in differentiating autonomic dysfunctions in Parkinson’s disease and multisystem atrophy [18].

Kampo is a branch of traditional Japanese herbal medicine, which has been developed from Chinese herbal medicine and practiced for more than 1500 years. Recently, Kampo is gaining popularity because of its methodical formulations and no side effects. Several studies have reported the beneficial effects of Kampo on the autonomic disturbance in patients [19,20]. Among the Kampo, Pueraria Decoction (PD) is a popular formulation used as a remedy for cold/influenza, the initial stage of febrile diseases, and inflammatory disease [21,22]. PD formulation is a mixture of 7 components: Pueraria (4.0 g, dried root of Leguminous Kudzu), ephedra (3.0 g, dried root of Ephedraceae), Cinnamomum cassia (2.0 g, dried twig of Cinnamomaceae), Poria (2.0 g, dry sclerotium of Poria cocos Wolf), Zingiber (2.0 g, fresh root of Zingiber officinale Roscoe), Glycyrrhiza (2.0 g, root and stolon of Glycyrrhiza uralensis Fisher) and Ziziphus (3.0 g, fruits of Rosaceae Rhamnaceae). Pueraria is the main component of PD, which is traditionally used to promote blood circulation, to reduce dry mouth and to treat cardiovascular diseases [23,24]. One of the main components of Ephedra is ephedrine, which is a sympathomimetic agonist that can act on both α- and β- adrenergic receptors [25]. It also can induce sympathetic activation by enhancing the release of norepinephrine from sympathetic neurons [26]. Another component of PD is Ginger, which shows anti-inflammatory, antiemetic, analgesic, antioxidant, glucose and lipid-lowering, anti-cancer and neuroprotective effects [27-30]. Peaonia lactiflora can inhibit cerebral and peripheral inflammatory responses [31,32]. Additionally, Glycyrrhiza is reported to have the ability to potentiate parasympathetic nerve activity [33].

Considering the roles of the components of PD on autonomic functions, we hypothesized that it might improve the agedependent imbalance of sympathetic and parasympathetic activity. To test this hypothesis, we administered PD to 2 groups of healthy subjects, young at their 20s and middle-aged at their 50s, and compared their autonomic function before and after taking PD using HUTT. We found that PD improves autonomic imbalance, especially in the middle-aged population.

To evaluate the effects of PD, the autonomic functions of every subject was tested twice using HUTT. First HUTT was performed to get an idea of the basal autonomic function of the subject. Then, 5 g of PD (TSUMURA company, Tokyo, Japan) dissolved in 100 ml of warm water was given to the subject. After taking PD, the subject rested in a quiet room for 30 min. Then, HUTT was performed again. The procedure of HUTT was described in the following section.

All subjects were tested in a quiet room at a controlled temperature of 24°C. The test was done at least 2 hours after their last meal. The subject was laid on the tilt table with both feet touching the footrest, and the body was supported by two belts at the levels of thigh and waist. When the heart rate and blood pressure attained a stable condition after taking rest for 15 min at supine position, the subject was passively tilted up 60° and kept at the position for 5 minutes. Before starting the test, the subject was instructed not to talk, and breathe spontaneously during the entire test period. The schematic diagram of the test procedure is depicted in Figure 1. Arterial Blood Pressure (BP) and Heart Rate (HR) were continuously monitored at the right wrist using ANS 508 (OMRON Korin Corporation, Kyoto, Japan). 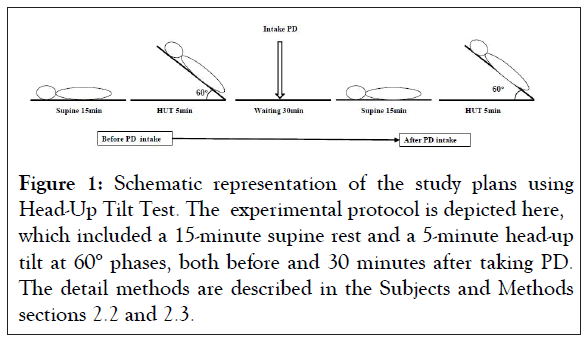 Figure 1: Schematic representation of the study plans using Head-Up Tilt Test. The experimental protocol is depicted here, which included a 15-minute supine rest and a 5-minute head-up tilt at 60° phases, both before and 30 minutes after taking PD. The detail methods are described in the Subjects and Methods sections 2.2 and 2.3.

Autonomic functions were analyzed by assessing the variation of BP and HR (RR-interval in electrocardiogram), and by the spectral analysis of blood pressure and RR-interval variability. The autoregressive spectral analysis provides low-frequency (LF, from 0.04 to 0.15 Hz) and high-frequency components (HF>0.15 Hz) of RR interval and SBP over a series of 128 consecutive points. These oscillatory components were expressed in absolute units (ms2 or mmHg2). After extraction from the RR variability, the spectral indexes are expressed as RR-LF, RR-HF, or the ratio of RR-LF to RR-HF (RR-LF/HF). According to previous studies, RR-HF is considered as a marker of vagal cardiac activity [13,14]. The ratio of RR-LF to RR-HF (RRLF/ HF) is referred as a measure of cardiac sympathetic activity [34,35]. SBP-LF is used as an index of sympathetic vasomotor control [15,17].

All data are presented as the mean ± Standard Deviation (SD). The statistical analysis was done using paired t test. The significance level was set at p value <0.05 (corrected value in the Bonferroni method). The analysis was conducted with SPSS 22.0 (IBM SPSS, New York, NY, USA).

Note: Heart rate and blood pressure data of study population during HUTT are shown in Table 1.

Table 1: Changes in the heart rate and blood pressure at supine and tilt position during HUTT. 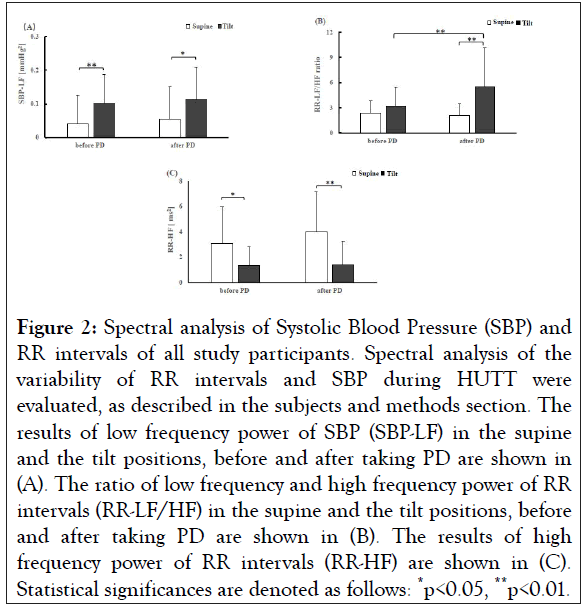 In the present study, we investigated the effects of PD on the autonomic nervous activity in healthy subjects using power spectral analysis of heart rate variability and systolic blood pressure. We have done this study on the young and the middleaged subjects because autonomic functions are reported to deteriorate with increasing age. Our study demonstrated that PD intake increased RR-LF/HF at the tilt position in all study participants, suggesting its effectiveness in the regulation of autonomic activity. In the young group, RR-HF was significantly decreased at the tilt position, whereas such changes were not observed in the middle-aged group. Moreover, the power values were significantly decreased in this group at the supine position compared to their young counterpart, suggesting an attenuation of vagal regulation. Attenuation of vagal activity and alteration of autonomic balance is related to increased mortality of cardiovascular diseases like myocardial infarction or heart failure [5,6]. Intake of PD is demonstrated to restore such decreased vagal activity (RR-HF) and autonomic balance (RR-LF/HF) towards the young age group. Hence, PD could provide some protection in the age-dependent risk of cardiac diseases by influencing autonomic functions.

Cardiovascular health and prognosis rely on sympathovagal balance, which is indicated by RR-LF/HF and RR-HF. At the tilt position, RR-LF/HF was increased after taking PD in all study populations, suggesting an increased effect of sympathetic activity. SBP-LF, which is referred to as an index of sympathetic vasomotor control, also showed an increasing tendency. But RRHF values, a measure of parasympathetic activity, were not significantly altered after taking PD, suggesting that the sympathetic part of the sympathovagal balance was mainly regulated by it. Ephedra is a major component of PD. Ephedra contains ephedrine, which shows direct agonistic effects on adrenergic receptors, and also augments the release of norepinephrine from the presynaptic nerve [25]. A previous report demonstrated that the administration of ephedra can increase sympathetic nerve response and RR-LF/HF [36,37]. Simultaneously, it decreases parasympathetic nerve response as evidenced by decreased RR-HF [36-38]. Since RR-HF response was not affected by PD, its effects on the autonomic system might not be solely due to Ephedra, but other compounds also have some effects that keep RR-HF stable. These different effects might be due to the combined actions of different major components of PD eg. Pueraria, Cinnamon Twig, and Glycyrrhiza which has an effect on increased parasympathetic activity [20,39]. Another previous study also showed that Pueraria, one of the PD compounds can lower blood pressure and increase blood flow by the reduction of vascular resistance [40]. These combined effects of PD are interesting and may play protective role for the cardiovascular system.

There were some limitations to this study. First, the number of participants was small because the procedures are complex and long examination time was necessary for one test. Also, we selected men as study participants to exclude the effect of autonomic nerve change influenced by hormonal changes. Secondly, the subjects in the present study were all healthy and therefore it is plausible that the observed effects would be different in the patients that potentially have cardiovascular or other diseases or risk factors. Despite these limitations, our study could clarify the effects of PD and its potential benefits on age-dependent changes of the autonomic nerve system.

Our study includes important aspects because the spectrum analysis enables us to understand the effect of Kampo medicine, objectively. It is also found that PD has a function of stimulating sympathetic nerve and simultaneously restoring the decrease parasympathetic functions. These findings suggest that PD might have combined effects to protect the whole autonomic nervous system, harmoniously by several mixed compounds in one medicine.

On behalf of all authors, the corresponding author states that there is no conflict of interest.

Copyright: © 2021 Garu A, et al. This is an open access article distributed under the terms of the Creative Commons Attribution License, which permits unrestricted use, distribution, and reproduction in any medium, provided the original author and source are credited.