A 72 year man with history of brain stem cavernous malformation and TIA was admitted with acute ischaemic stroke and NIHSS score of 10. Initial CT scan of brain did not show any established infarct or haemorrhage. After discussion with patient and family patient received intravenous thrombolysis and 24 hours post thrombolysis NIHSS had improved to 8. He participated in rehabilitation with good recovery and functional outcome in left arm.

We present the unusual case of thrombolysis for an acute ischaemic stroke in a 72 year old man with a known large brainstem cavernous malformation. He had been admitted to our unit a month previously with resolving expressive dysphasia and treated as a high risk TIA. Risk factors included hypertension, hypercholesterolemia and chronic kidney disease Stage 3. MRI head at this time demonstrated an incidental brainstem lesion in the right cerebral peduncle and pons area, measuring 1.3 cm in diameter (Figure 1 and Figure 1A) with haemorrhage on the right side of the brain stem involving the pons and the right cerebral peduncle on gradient echo sequence. The case was discussed with local neurosurgical team and diagnosis of cavernous malformation was confirmed and he was discharged on single antiplatelet (aspirin) and a statin, with outpatient neurosurgical follow-up planned. 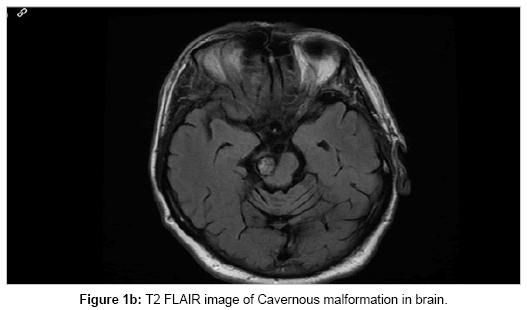 Figure 1b: T2 FLAIR image of Cavernous malformation in brain.

He was readmitted to our stroke unit a month later with history of acute onset left-sided weakness and left sided facial droop. On examination there was left arm and leg weakness with left sensory inattention. Initial NIHSS score was 10. His admitting blood pressure was 155/70 mmHg. CT brain demonstrated no acute cerebral haemorrhage or established area of infarction (Figure 3a). After detailed discussion and explanation of possible bleeding risks with thrombolytic treatment he consented to intravenous thrombolysis two hours after initial symptom onset. Post thrombolysis blood pressure was 150/65 mmHg.

Post thrombolysis, he was monitored closely for evidence of bleeding. Repeat CT head demonstrated a right parietal infarct with minor haemorrhagic transformation (Figure 3b) but this was not in the area of the cavernous malformation (Figure 2a and Figure 2b) and the patient remained clinically stable. Post-thrombolysis NIHSS score was eight. His rehabilitation was initially slow but he improved to walk independently and regained good functional improvement in his left arm.

NICE recommends any patients regardless of age or stroke severity should receive intravenous thrombolysis with alteplase within 4.5 hours of time of onset when there are no contraindications and intracerebral haemorrhage is excluded on initial brain scan. Depending on the definition of symptomatic intracerebral haemorrhage used; according to SITS the risk is 8.6% when treated with in 3 hours; in ECASS-3 definition it is 2.4%.

A Cerebral Cavernous Malformation (CCM) could be found in 1 in 600 people if they were scanned with MRI without any symptoms [1]. The annual risk of bleeding form CCM is estimated at 2-4%. A Mexican study of 133 patients examining predictive factors for intracerebral haemorrhage showed that non lobar location of cavernous angioma gave a higher risk of haemorrhage with 2.33% per year for brainstem.

Finding of an asymptomatic cavernous malformation is not considered as exclusion criteria for thrombolysis but there is plausible risk of bleeding which may prevent a physician offering thrombolysis with alteplase after an acute ischaemic stroke. Our patient represented a month after initial TIA where his MRI scan had shown a large cavernous malformation in the brainstem, and our initial concern was that of acute intracerebral haemorrhage. He was discharged on single antiplatelet medication to be used long term [2]. Plain CT Brian imaging excluded this and with lack of evidence and concern of bleeding risk of such a lesion, our stroke team was very apprehensive even to discuss the option of thrombolysis.

A further case describes a patient with clinical posterior circulation ischaemic stroke who was thrombolysed and subsequently developed a large frontoparietal bleed at the exact location of the cavernous malformation with MRS 4 on discharge [1].

It is not uncommon for patients with cerebral infarcts to have incidental unruptured aneurysms. It has been unknown/unclear for a while whether the risk of haemorrhage from aneurysm rupture following administration of intravenous tPA is a significant one. Many studies have been sought to determine the safety of intravenous thrombolysis in patients with pre-existing aneurysms. Intracranial aneurysms have been exclusion criteria for patients who will otherwise meet the criteria for intravenous thrombolysis (tPA) due to the theoretical risk of increased risk of bleeding. With the increasing use of intracerebral imaging there has also been an increase in the incidental findings of aneurysms. 73% of these aneurysms are located in the anterior circulation and 27% in the posterior circulation [5]. It is important to note that the bleeding usually associated with aneurysm rupture is subarachnoid haemorrhage [6].

Many case studies suggest that intravenous thrombolysis may lead to cerebral aneurysm rupture in about 1 in 34 patients, almost all of these aneurysms measured 10 mm or less. The site of bleeding when seen was not related to the aneurysm site and more in the actual area of infarct [7]. One study reported a case of a patient who can multiple cerebral aneuyrsms and had both intravenous and intra-arterial tPA administered with no post thrombolysis bleeding [8].

Most of these studies did conclude that IV tPA is indeed safe to administer in patients with pre-existing cerebral aneurysms as the rate of aneurysmal rupture is quite low.

Further trials to determine the risk of spontaneous intracerebral haemorrhage as a complication of intravenous thrombolysis of acute ischaemic stroke are required. Until we have this evidence the evidence of such treatment in patients with incidental intracranial aneurysms could be used to provide a basis for possible discussion of bleeding risk of intravenous thrombolysis in acute ischaemic stroke and co-existing CCM (although with caution as they are separate entities).

Copyright: © 2013 Shoaib R, et al. This is an open-access article distributed under the terms of the Creative Commons Attribution License, which permits unrestricted use, distribution, and reproduction in any medium, provided the original author and source are credited.