Stevens-Johnson syndrome (SJS) is caused by abnormal immunologic reactions, normally after exposure to drugs or infections. It is a severe and rare disease, belonging to the group of toxic epidermic necroses (NET). All mucous membranes can be reached: ocular, genital, esophageal, nasal or oral. These complications can lead to aesthetic and functional damage such as blindness or dyspareunia. Of these mucosal complications, labial synechiae are the rarest. We report labial synechia complicating SJS to lamotrigine. This observation encourages us to propose systematic prevention of potential oral sequelae.

A 19-year-old Moroccan girl presented with SJS secondary to the use of lamotrigine. The patient had been prescribed 03 weeks earlier lamotrigine to control an epileptic seizure. Histological examination of a skin biopsy was in favor of the SJS. Mucosal injury was associated with conjunctivitis and hyperalgesic stomatitis. Ten days later, the patient’s mouth opening was limited and she presented bilateral adhesions between the upper and lower lips of 6 mm on the left (Figure 1) and 3 mm on the right (Figure 2) resulting in aesthetic and functional damage. These synechias were not painful but resulted in obvious functional damage. No ocular or genital synechia was found. Lip movements with maximum mouth opening several times a day was recommended until full healing was achieved and then surgical treatment of the labial synechiae was suggested by section and then sutures. Genital and ocular monitoring was proposed. 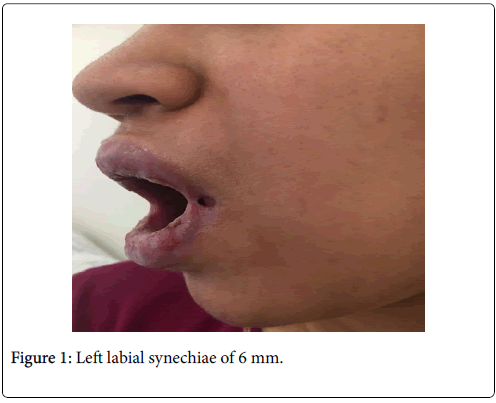 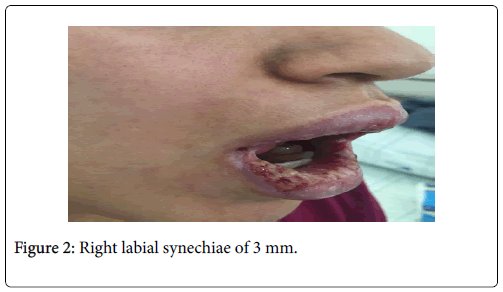 Mucosal damage and its sequelae have been widely described in NET. As in burns, a few days are enough for the formation of synechiae if two mucosal lesions are in contact. Ophthalmic sequelae are more frequent. Lip adhesions are an unusual complication of healing in the lesions of SJS. In severe cases the labial epithelium may be broadly eroded. Crusting occurs within 2 to 3 days [1]. As a result of the crusting, the lips are often sealed, especially at the angles. In this case it is likely that as a result of the pain and bleeding, the ulcerated lips were not separated, resulting in healing occurring between the eroded epithelium of the upper and lower lips.

As in this case, the adhesions all occurred at the angles, hence the use of the term angular webbing to refer to the strand of tissue interconnecting the upper and lower lips [2].

Oral mucosal adhesions can cause cosmetic sequelae, but above all they hinder functional prognosis which significantly impact quality of life.

Though not a serious complication and easily dealt with by bilateral chalinoplasty, lip adhesions can be prevented. A 45 year old woman who developed labial synechiae after a medicated SSJ was successfully treated with a CO2 laser [4].

These complications should be prevented by lip movements with maximum mouth opening several times a day starting as soon as possible, the application of a lubricant and using hydrocortisone ointment may also encourage rapid healing.

If the instructions for lip mobilization seem difficult to apply, or if the clinician has a doubt about the observance of instructions, making silicone gutters of vestibular deepening can be discussed, performed by dentists or maxillofacial surgeons. However, wearing these gutters can be extremely painful. The movements of the lips and the possible port of the gutters must be prolonged until complete healing.

Mucosal lesions are often hyperalgic and pain management should be associated. The treatment of pain improves the comfort of the patient and prevents complications, because the patient no longer needs to adopt an analgesic position. Ocular and genital complications must also be prevented and the section of the synechiae is performed under anaesthesia as soon as they appear [9].

Complications of mucosal involvement must be prevented by early, adapted and multidisciplinary management. We suggest that minor attention to the oral cavity by occasionally moving the lips during the healing phase could have prevented such adhesions and could have circumvented the need for corrective therapy. The treatment of pain should not be neglected since it avoids analgesic attitudes that provide complications.

The authors declare no conflict of interest.

Copyright: © 2018 Mansouri S, et al. This is an open-access article distributed under the terms of the Creative Commons Attribution License, which permits unrestricted use, distribution, and reproduction in any medium, provided the original author and source are credited.