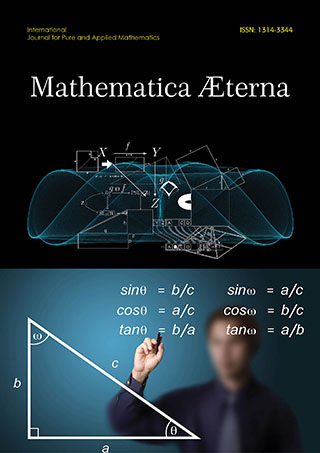 A Generalization of Polarization Formula and Its Application in Phase Retrieval

In this paper, some generalizations of the classical polarization formula are used to recover the relative phase in phase retrieval problem. Theoretically, in order to reconstruct any signal from its intensity measurements by polarization formula, the amount of needed measurements can be same as PhaseLift method. The numerical simulation also illustrates its good effect in (affine) phase retrieval with additive white Gaussian noised intensity Fourier measurements.

forms a frame of Cd. Since

the best reconstruction of x is up to a unimodular constant. Phase retrieval arises in many areas of engineering and applied physics, including X-ray crystallography [1-8], optics [9], and computational biology [10-13]. In fact, it is difficult to solve the phase retrieval problem if one only knows the intensity measurements. One way to overcome this issue is to collect more prior information of the signal x [11]. Another way is to take more additional measurements. We only mention two different methods of the second way. The PhaseLift algorithm is proposed by Candès et al. with the lift technique of semi-definite programming [6]. Polarization method using structured measurements is proposed by Alexeev et al. [2]. Natural nonconvex algorithms often work remarkably well in practice, but lack clear theoretical explanations, therefore Sun et al. give a geometric analysis of phase retrieval [14]. Recently, phase retrieval in infinite dimensional space also attracts great attentions. Reconstruction of a bandlimited real-valued function f from unsigned intensity measurements is considered [8]. Unlike the finite dimensional case, phase retrieval in infinite dimensional Hilbert space is never uniformly stable [4]. Therefore, Alaifari et al. proposed a new paradigm for stable phase retrieval by considering the problem of reconstructing signal up to a phase factor that is not global [1].

In this paper, the frame theory is used to obtain some polarization identities. At first, we briefly introduce some definitions and notations. Let H denotes a separable Hilbert space with the inner product

and J be a countable index set.

of elements in H is a frame for H if there exists constants A, B > 0 such that

The constants A, B are called lower and upper frame bounds for the frame. A frame is A-tight, if A=B. If A =B=1, it is called a Parseval frame.

Frame theory not only provides an effective analysis method for signal processing, but also offers a reconstruction method. We call

a dual frame of

if it is a frame for H and satisfying

The dual frame always exists but generally not unique. Since

is also a frame, the function f has the expression

as well. For special case, if

is an A-tight frame, then

is a dual frame. And if

is a Parseval frame, it is a dual frame of itself.

Since the complex field C is closely related to the Euclidean space R2, the frame theory in R2 can be rewritten with respect to complex numbers. Explicitly, any complex number Z=X+IY can be considered as a bidimensional vector (x, y). Therefore, for any two complex numbers z1 and z2, the real part

is an inner product of the vectors with respect to them. Without confusion, we call the collection

is a frame for C if its corresponding collection of vectors is a frame for R2. And the frame reconstruction formula can be rewritten as

is a frame for C with dual frame

Proof. We expand the modulus:

Taking summation over k and applying reconstruction formula (1.2) to the expansion, we get the desired result.

Above lemma can be generalized to any Hilbert space to get a polarization identity with similar proof.

is a frame for C with dual frame

. Then for any two elements f, g in a Hilbert space H, we have

By imposing some constraints to the frames, we can get some compact results. For instance, if

is an equal norm frame that is

Furthermore, if we require

is an A-tight frame, then the expression is not related to dual frame in form. Explicitly, we have

All the above polarization identities can be generalized to sesquilinear form. We only show the last one in the following.

Theorem 2.2. Let W be a complex vector space, S a sesquilinear form on W, and q the quadratic form generated by S. Suppose

is an A-tight equal norm frame for W with

One important thing is whether an equal norm tight frame exists. The answer is positive and explicit constructions are given in finite frames: theory and applications [7] and reference therein. In the rest of this section, we consider the frame that consists of Nth roots of unity.

there exists an angle θ such that

is used in the last equation.

By the frame properties we have

As mentioned before, there is an equivalent formula corresponding to complex field C. Explicitly, for any complex number z, we have

in Lemma 2.1 and Theorem 2.1, we get the following two corollaries.

Corollary 2.2. Let H be a complex Hilbert space and

Consequently, the above corollaries can be viewed as a generalization of the canonical polarization formula.

The frames consisted of Nth roots of unity play an important role in above discussion. Since it’s not very efficient in phase retrieval when N is large, reduction of elements in frame is needed. In fact, three elements of the Nth roots are enough for recovering the inner product. Let k1,k2,k3 be any three different integers in the set {0,1,...,N −1}. Then

must form a frame for C. If there exists a dual frame

Then we get a reconstruction formula

In fact, if we write

since the reconstruction formula holds if and only if it holds for f =1 and f=i by linearity of innerproduct, the equations (2.8) and (2.9) are equivalent to the matrix equation XA = B, where

If A is invertible, the matrix equation has a unique solution and the corresponding dual frame satisfy (2.8) and (2.9). By simple computation, we have

Combing the above discussion, we have the following conclusion:

forms a frame of C with a dual frame

The others can be written out similarly.

If we continue to reduce the number of elements in a frame to two, then the new frame should be a basis of C and have no redundancy. Therefore, the restriction

is no longer hold. However, we still can recover the innerproduct by the following theorem whose proof is similar to Theorem 2.3.

if N is odd and

if N is even, then we have that the set

forms a frame with dual frame

which is given by

Example 2.2. The Nth roots of unity are

when N=3. By Theorem 2.4, we get three frames and their dual frames, which are listed in Table 2. As a result, we can get three polarization identities by Theorem 2.1. The first one is given by

The others can be written out similarly.

In Example 2.2, the expression of polarization identity is not likely to become easier than Example 2.1. However, in phase retrieval, since the original intensity measurements ∥f ∥2 , ∥g∥2 are known generally, only two additional measurements are needed in order to recover relative phase.

In this section, we apply the polarization identities to phase retrieval problem. The key ingredient is to add new measurements in order to gain the relative phase.

By leveraging the ideas of Alexeev et al. [2] and Bandeira et al. [3], we can implement polarization algorithms in phase retrieval problem with the help of polarization identities that are given in Section 2. Suppose the intensity measurements

are known, the key point to recover signal x with polarization method is to compute the relative phase using

the relative phase between

can be considered as an innerproduct in C, it can be computed by Lemma 2.1. If

for every i∈ J , we can get the relative phase

of two points with

is fixed. Then the signal x can be recovered up to a global phase factor. In graph theory terms, if the graph with vertex

and edges x is a circle or star, then we can recover x . However, in general situation, there is a mask

orthogonal to the signal x i.e.,

Therefore the relative phases can’t propagate across this vertex. The authors of Alexeev et al. [2] propose to design full spark frame and expander graph to overcome this shortage.

In this section, we focus on phase retrieval simulations with masked Fourier measurements, which are obtained by measuring the Fourier power spectrum of signals with adding mask. In order to have a high probability recovery, the mask is chosen randomly with Gaussian distribution.

Then the discrete Fourier transform

are known, additional measurements are needed to recover the relative phase. Taking

for computing every relative phase

If all intensity measurements

to recover x . By Theorem 2.3, one can reduce the number of total masks to four. When the intensity measurements

are known, one can continue to reduce the amount of masks to three by Theorem 2.4. For instance, we can take the masks as in Example 2.2, and then the total masks are

Comparing with the masks

We demonstrate the performance of polarization method with different frames and their duals in phase retrieval problem. Given a random signal, we add white Gaussian noise with different noise level to the intensity measurements such that the signal noise ratio (SNR) changes from 13 to 40 with step length 3. The effects of recovering the original signal with different frames are shown in Table 3, where

correspond to N-th roots of unity frames, the first frame in Table 1 and Table 2 respectively. Observing Table 3, we find that the polarization method also have denoising effects due to the least square method that is used in the reconstruction process. For different frames, it seems that the effects have not much difference. However, for large N, we can still recover the signal when erasures occur in intensity measurements.

Affine phase retrieval introduced in Gao et al. [10] has an exact reconstruction but not up to a unimodular constant. Explicitly, we consider recovering signal from the absolute values of the affine linear measurements

, by vector augmentation, we set

Then the measurements can be written as

Figure 1: The left is the original image, right is the reconstruction image from intensity measurements with SNR=20.

By the advantage of frame theory, a class of generalization of polarization formula is given, which makes the classical polarization as a special case. It provides a strong support for recovering the relative phase in polarization method. Furthermore, the same amount of intensity measurements are used as in PhaseLift method. The numerical simulations also demonstrate its good effect in (affine) phase retrieval of signal and image with Fourier measurements.

The authors would like to thank the referees for their useful comments and remarks.

The [cameraman.tif] data used to support the findings of this study are available from the corresponding author upon request.

This study was partially supported by National Natural Science Foundation of China (Grant No.11601152).

All authors contributed equally to this work. All authors read and approved the final manuscript.

Copyright: Â© 2019 Zhuang Z, et al. This is an open-access article distributed under the terms of the Creative Commons Attribution License, which permits unrestricted use, distribution, and reproduction in any medium, provided the original author and source are credited.