Sixty-four bulk samples of two residual lateritic soils forming the subgrade of the failed sections flexible highway pavement linking Ilorin to Mokwa in central Nigeria were investigated. This was with a view to determining the level of variation in the geotechnical properties of soil samples taken systematically within restricted area in two locations underlain by different bed rocks. One set was developed over sandstone formation of the Southern Bida Basin while the other set was developed over migmatite-gneiss. Consistency limits, grain size distribution, specific gravity, compaction, California Bearing Ratio (CBR), permeability and compressibility characteristics of these soils were determined using the British standard procedures 1377. Coefficient of variation was used to measure the degree of variation in the determined properties. The coefficients of variations for the sandstone derived soil (1.68% and 56.86%) are higher than that of the migmatite-gneiss derived soil (1.28%-54.40%). Permeability, linear shrinkage, and coefficient of volume compressibility possess the highest variability. Atterberg limits and derived indices, amount of fines, soaked and unsoaked CBR possess moderate variability, while moisture density parameters (MDD and OMC), natural moisture content and specific gravity exhibits the least variability. In order to prevent design errors, field sampling should be very thorough involving collection of several samples. This approach will eliminate wrong inferences often associated with results of testing of few samples

The Ilorin-Mokwa road is an economically important highway linking the Nigerian Southwest with the Northwest. This highway is the major transport route for agricultural goods, services and petroleum products between these regions. It is characterized by all manner of structural failures ranging from waviness to large potholes and completely failed sections. A number of reasons ranging from faulty designs, lack of drainage, thin wearing course coverings, negligible quality control, inadequate maintenance funding, geological and pedogenic factors to geotechnical factors have been adduced to the general poor conditions of Nigerian roads [1-3]. Although, there are many probable reasons for the failure of this important highway, certain observations were made while carrying out preliminary studies on it. Figure 1 shows that the thickness of the highway flexible pavement and its foundation are not good enough and do not meet up with recommended specification for upper layers of highly trafficked flexible highway pavements. It was also noticed that the highway lacks adequate crown and possesses little slope that give room for efficient drainage of rainwater away from the pavement surface. Water penetrates the pavement from the surface and infiltrates from the sides of the road because of holes in the pavement and the fact that most sections do not have shoulders bordered by ditches as shown by Figure 2. The road therefore sometimes serves as drainage path for rainwater because the pavement is not well elevated. Incidentally, this federal highway has the highest average daily traffic and percentage of heavy vehicles in Nigeria [3]. This road therefore, requires more skillful design and careful considerations of all possible factors that might affect its service life. Figure 1: A deplorable section of the Ilorin-Mokwa Road at Onipako near Jebba. It is often assumed that soil properties are the same throughouts a rather wide area when sampling for geotechnical tests. However, undetailed sampling can lead to conclusions that significantly differ from true soil behavior. Therefore, there is a need to quantify the amount of uncertainties attached to highway subgrade sampling so as to minimize design errors attached to undetailed sampling. The aim of this paper was to establish the degree of variation of some highway geotechnical parameters within restricted area underlain by different bedrocks. Phoon and Kulhawy recommend a statistical analysis including the coefficient of variation and the scale of fluctuation for this purpose [9]. However scale of fluctuation for evaluating spatial variability of parameters that can be obtained from in situ tests because they provide continuous record of ground properties [10].

A study location was located in Shao near Ilorin on latitude N08°33.268’ and longitude E004°30.730’, while the second location was located near Mokwa and it lies on latitude 09°12.484’ and longitude E 004°52.459’. These two locations belong to the same climatic belt and but underlain by different bedrocks. Ilorin is underlain by Precambrian Basement Complex rocks, while Mokwa is underlain by the Cretaceous Sandstone Formation of the Bida Basin. The Bida Basin is a NW-SE trending intracratonic sedimentary basin extending from Kontagora in Niger State of Nigeria to areas slightly beyond Lokoja in the south. It is delimited in the Northeast and Southwest by the Precambrian Basement Complex [11]. Figure 3 shows the location and geology of the study areas. Nigeria is located within the tropics and therefore experiences high temperatures throughout the year. The mean temperature for the country is 27 °C. Average maximum temperatures vary from 32°C along the coast to 41°C in the far north, while minimum figures range from 21°C in the coast to below 13°C in the north. The climate of the country varies from a very wet coastal area with annual rainfall greater than 3,500 mm to the Sahel region in the north eastern parts with annual rainfall less than 600 mm. Generally, there is a distinct wet and the dry season within a year. The length of the rainy season decreases from 9-12 months in the south to only 3-4 months in the extreme Northeast. Average rainfall in the northern limit of the belt is about 254 mm annually. Mean monthly relative humidity is about 29%. The study area falls within the zone that receives 140-160 mm of rain per annum. Two locations 15 m away from the highway with different exposed bedrocks (Migmatite-Gneiss and Sandstones) were selected. In each location, disturbed samples were taken at 5 m sampling interval within gridded as shown in Figure 4. Index and engineering tests relevant in highway geotechnics were carried out on the samples. All tests were carried out in accordance with the British standard method of testing soil 1377, modifications where necessary were however made [13]. Determined parameters include consistency limits, grain size distribution, specific gravity, compaction, soaked and unsoaked California bearing ratio (CBR) permeability and compressibility. The variability in the values of measured parameters was presented using contour plots while coefficient of variation was used to measure the degree of variation of these properties. The contour plots were made using MATLAB curve fitting method. The higher the coefficient of variation, the greater the dispersion in a set of variables and values up to 10% is believed to show significant variability within any set of data. Figure 5: Contour plots of the linear shrinkage values of the studied soil samples.

Table 1 shows the values obtained from the statistical treatment of data obtained from liquid limit, plastic limit and plasticity index of the studied soils. The degree of variability in Atterberg limits values for the sandstone soil is generally higher than that of the migmatite soil. This can be observed in the consistently higher values of the coefficient of variation characteristic of the sandstone soils. The coefficient of variation in the Atterberg limit for the migmatite derived soil ranges from 17.00% to 21.64% while that of the sandstone soil ranges from 11.26% to 17.32%. Figures 6-8 show the contour plots of the Atterberg limit of the studied soils. It can be noticed from these figures that the Atterberg limit values of the SS soil samples vary more within the gridded sampling area than the MG soil samples.

Figure 6: Contour plots of the liquid limit values of the studied soil samples.

Figure 7: Contour plots of the Plastic limit values of the studied soil samples.

Figure 8: Contour plots of the plasticity index values of the studied soil samples.

Figure 9: Contour plots of the amount of fines present in the studied soil samples.

Figure 10: Contour plots of the specific gravity values of the studied soil samples.

Figure 11: Contour plots of the natural moisture content in the studied soil samples.

Table 4: Summary of the statistical treatment of the CBR and moisture dry density values of the studied soil. Figure 12: Contour plots of the OMC values of the studied soil.

Figure 13: Contour plots of the soaked and unsoaked CBR values of the studied soil.

Table 5: Summary of the statistical treatment of the permeability and consolidation data.

Figure 14: Contour plots of the coefficient of Permeability values of the studied soil.

Figure 15: Contour plots of the coefficient of volume compressibility values of the studied soil.

Degree of variation and sampling 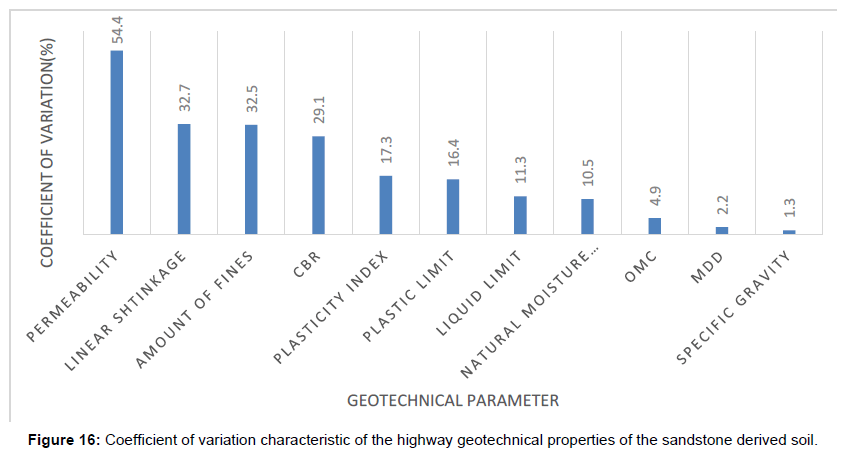 Figure 16: Coefficient of variation characteristic of the highway geotechnical properties of the sandstone derived soil. 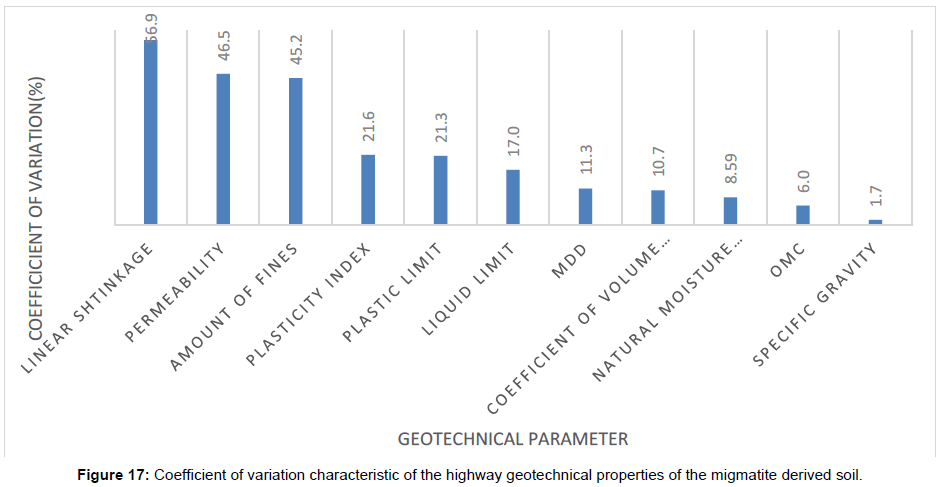 Figure 17: Coefficient of variation characteristic of the highway geotechnical properties of the migmatite derived soil.

Highway geotechnical parameters of two genetically different residual lateritic soils were treated statistically to determine the degree of variation associated with them within a restricted area. The coefficient of variation for the migmatite derived soil samples range between 1.28% and 54.40% while those of the sandstone derived soil range between 1.68% and 56.86%. Except for specific gravity, significant variability exists in the values of all determined highway geotechnical parameters of the studied soil samples within restricted area. Except for Permeability coefficient and unsoaked CBR, the Mokwa sandstone derived lateritic soil exhibits more heterogeneity than the Shao migmatite-gneiss derived one. Permeability coefficient, linear shrinkage and coefficient of volume compressibility possesses relatively high variability. Atterberg limits, amount of fines, soaked and unsoaked CBR have relatively moderate coefficient of variation while moisture density parameters (MDD and OMC), natural moisture content and specific gravity have relatively low variability. Therefore, detailed sampling, statistical analysis and geological considerations should be the basis for determination of parameters often utilised for foundation design for flexible highway pavement.

Copyright: © 2017 Owoyemi OO, et al. This is an open-access article distributed under the terms of the Creative Commons Attribution License, which permits unrestricted use, distribution, and reproduction in any medium, provided the original author and source are credited.
Top