Therapy - Related Myeloid Neoplasm in a Patient with Prior Treatment for Chronic Lymphocytic Leukemia: A Case Report

Therapy - Related Myeloid Neoplasm in a Patient with Prior Treatment for Chronic Lymphocytic Leukemia: A Case Report

Chronic lymphocytic leukemia (CLL) is classified as being a highrisk disease for developing secondary neoplasms due to the immunodeficiency associated with the disease and/or in that the treatment utilizes purine analogs, cyclophosphamide, chlorambucil and monoclonal antibodies [1]. CLL may also transform to non- Hodgkin lymphoma or prolymphocytic leukemia with a quite aggressive clinical picture. This also confirms the ability of CLL to shift towards further oncogenesis [2,3]. Acute myeloid leukemia (AML) or myelodysplastic syndrome (MDS) during the course of CLL, in being therapy-related, is a rare entity; such situation has been observed in only 0.5% to 6.1% of all patients treated with fludarabine alone or in combination, and in only a very few patients treated with chlorambucil alone [4,5]. Furthermore, treatment with 2-chlorodeoxyadenosine has been associated with only a 13% risk of second neoplasm, and with a risk of AML/MDS in only 8.1% out of all those treated [6]. In addition, AML or MDS, in coexisting with untreated CLL, has been reported in only a very few patients. Hence, this may support the theory of such coming about being due to two separate disease clones, and not being therapy-related [7-9]. Of note, AML afflicting individuals with complete remission (CR) of CLL via treatment with fludarabine plus cyclophosphamide and rituximab (F-CR regimen), is also a very rare entity.

We report here the case of a 60-year old, Caucasian female with CLL, who developed AML that was preceded by t-MDS, 3 years after successful completion of CLL therapy, yet while still being in CR. The patient was diagnosed six years prior as being afflicted with CLL, Rai stage I, unmutated IgVh status. At diagnosis, the immunophenotype (IF) of her lymphoid peripheral blood (PB) cells and bone marrow (BM) cells revealed the typical picture for CLL, albeit, without the presence of myeloid or aberrant antigens. What is more, at diagnosis, no chromosomal changes of BM were found by way of GTG examination. For almost the first two years post-examination, she did not require any treatment. However, first line treatment was begun in 2004. This consisted of 6 courses of treatment with chlorambucil and prednisone, because the patient refused more intensive chemotherapy. Hence, only partial remission (PR) was obtained. CLL progression was noted in late 2005, and then she agreed to receive 6 courses of treatment with fludarabine plus cyclophosphamide plus rituximab (the FCR regimen). She achieved complete remission in 2006, this being confirmed by IF of PB and by BM cells and trephine biopsy examination, but we noted incomplete recovery of Hb, platelets and WBC count (iCR). Such a situation lasted for the next 3 years. In this period, attending medical staff observed no profound pancytopoenia, so that, in the held opinion, bone marrow examination was not indicated. The clinical status of the patient was stable. In August 2009, she was transferred from a hospital in Sweden, to Poland, and then displayed symptoms of severe pleuropneumonia and deep cytopenia, accompanied by symptoms of thrombocytopenic diathesis. This brought about a diagnosis of AML. Still, during physical examination, no lymphadenopathy and hepatosplenomegaly were present. Moreover, in a CT examination of the chest and abdomen, no CLL changes were seen. In Sweden, after a preliminary BM examination, attending medical personnel noted a 15% presence of myeloblasts, as well as refractory anemia and the excess of blasts (RAEB-II). A followup BM biopsy performed one week later in Poland revealed 52% blast cells which all displayed a myelomonocytic immunophenotype-with CD33, CD34, CD11c, CD13, CD14, HLA-DR, CD15, CD38, MPO, CD64 positivity. However, no CLL cell clone was detected, while CD5/ CD19 and CD23/CD19 antigens were negative. The patient was still in CR of CLL. Via GTG examination, a cytogenetic analysis of the BM aspirate indicated the presence of complex chromosomal abnormalities (45~47, XX, del (5)(q13q33), trisomy 8, trisomy 20, monosomy 21, +mar[cp12]/46, XX) [3]. Yet, FISH examination did not reveal any abnormalities with regard to chromosomes 11, 12, 13 and 17. The patient's laboratory data after the completion of the FCR regimen and at the time of diagnosis of AML, are summarized in (Tables 1 and 2) and (Figure 1). The patient subsequently received an induction chemotherapy that followed the DA regimen (daunorubicine plus cytarabine) and she obtained CR. The applied consolidation chemotherapy followed the HAM regimen (mitoxantrone plus cytarabine). Unfortunately, one month after completion of the HAM regimen, relapse occurred, with, through BM examination, 33% of all blasts being afflicted and extra medullar leukemic infiltrations of the head being observed. We resigned from the intensive re-treatment of the patient due to her poor clinical performance status, hence, she received tretinoin acid with steroids, supplemented with red cell packs and platelet packs. The patient died 8 months post-diagnosis of AML, due to the progression of her leukemia, the presence of extra medullar infiltrations, and due to complications (infections, as well as GI tract hemorrhages induced by diverticulitis). 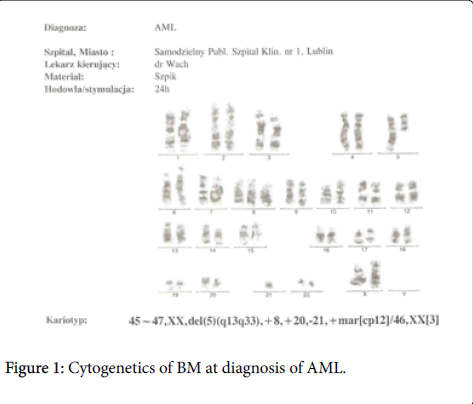 Figure 1: Cytogenetics of BM at diagnosis of AML.

Table 1: Laboratory data of the patient.

Table 2: Laboratory data of the patient at the diagnosis of AML-cont.

Chronic B-lymphocytic leukemia is the most common leukemia in adults, and it constitutes about 33% of all leukemia’s. It is a high-risk disease for developing secondary neoplasms because of the immunodeficiency that is associated with the disease and/or with the treatment [1]. Herein, Kaposi sarcoma, lung cancer, laryngeal carcinoma, malignant melanoma, as well as brain, stomach and bladder carcinomas are the most frequent [1]. In the past, CLL therapy involved the administration of chlorambucil, cyclophosphamide, steroids and antracyclines.

This was more frequently undertaken as complex regimens. Over the last ten years, however, fludarabine alone or in combination (cyclophosphamide, mitoxantrone, rituximab and steroids) has been widely used for first-line therapy. Such regimens have a high response rate [4,5]. In this therapy, the combination of purine analogs with alkylating agents leads to a synergistic antitumoral effect, but it also enhances toxicity and the risk of developing secondary malignancies [4,5,10]. In particular, chemotherapy with fludarabine combined with mitoxantrone is associated with a 2.3% risk of developing MDS or AML in patients with lymphoproliferative diseases [11]. AML or MDS is a hematological neoplasm seen very rarely during a CLL clinical course. In such instances, it is mostly considered as being therapyrelated. AML or MDS has been observed in 3.5% of all patients with CLL who were treated with fludarabine plus chlorambucil, in 0.5% of all patients treated with fludarabine alone, in 6.1% of all patients treated with fludarabine in combination with mitoxantrone and/or cyclophosphamide, in 9% of all patients treated with fludarabine when combined with cyclophosphamide, in 2% of all patients treated with FCR regimen, and in a very few patients treated with chlorambucil alone [4,11,12]. Furthermore, the risk of AML/MDS was described in 8.1% out of all CLL patients who underwent a treatment of 2- chlorodeoxyadenosine proceeded by chlorambucil [6]. Risk factors predisposing for developing t-AML/MDS after fludarabine therapy, include paratrabecular pattern of bone marrow infiltration with lymphoma, rituximab administration, prolonged bi/pancytopenia and hypocellular marrow [13]. Therapy-related AML (t-AML) is a wellknown clinical entity recognized by the World Health Organization (WHO) classification of AML, and is seen as potentially coming about as a late complication after cytotoxic and/or radiation therapy [14,15]. Still, the etiology of therapy-related neoplasms, including t-AML, remains unclear, because many various genetic pathways and mutations are involved in this process. Two main groups of t-AML have been described in literature. The first is one of leukemia arising 5 to 7 years after alkylator therapy (chlorambucil, cyclophosphamide) or via irradiation therapy. This is associated with abnormalities of chromosome 5q and/or 7q. The second is of leukemia coming about within 2 to 3 years following topoisomerase II inhibitor (mitoxantrone) therapy. Here, translocations are seen which involve bands 11q23 (MLL) or 21q22(RUNX1) [14-16]. In the t-AML that can develop in CLL patients, other chromosomal abnormalities have been seen. These involved chromosomes X, 1, 8, 12, 17 and 19 [4]. Prognosis for t-AML patients is poor, with median survival<1 year due to several factors commonly present at the time of diagnosis of t-AML in patients with an underlying neoplasm. These include injury to organs from prior therapy (including marrow stroma with depletion of normal stem cells), persistence of the primarily neoplasm, and chronic immunosuppression leading to immune defects. This last mainly affects the cellular components of the immune system (the B-cells, Tcell subsets, natural killer cells and dendritic cells) [14-16,17]. In addition, antibiotic-resistant bacteria and fungi infection, as well as refractoriness to transfusions may have negative influence upon the t- AML clinical outcome [14]. What is more, t-AML patients treated by way of different regimens may achieve CR only in 28% of all outcomes [18]. Of interest, the performance of allogeneic transplantations in t- AML patients is a cure option, and this can result in 20% to 30% OS [19,20]. Indeed, in a 3-year follow-up study, t-AML patients, after autologous transplantation, have been revealed to have a 35% OS [21]. That AML or MDS can coexist with untreated CLL has been reported in very few patients. Such a scenario is possible support for the theory of two separate disease clone events coming about in the progress of the disease. These are not therapy-related [7-9]. AML occurring in situations of complete remission of CLL that were treated by way of the FCR regimen is also a very rare entity. This is the case presented in this paper.

In the demonstrated case, we could consider this AML to be of therapy-related origin, as the patient showed complete remission of CLL after successful treatment with a FCR regimen. In her, AML developed 3 years after the completion of a therapy that consisted of chlorambucil being the first-line treatment, and, which, subsequently, was followed up with fludarabine, rituximab and cyclophosphamide. Since chlorambucil, fludarabine and cyclophosphamide was administered to the patient, while at this time, pancytopenia was indicated and an aberration concerning chromosome 5 was revealed, as the aforementioned lasted for 3 years, this supports the possibility that this situation was one of therapy-related leukemia [14]. However, it cannot be excluded that this event was, in actuality, a second myeloid neoplasm resulting from sleeping clone selection during the clinical course of the CLL. This realization is due to the unclear pathogenesis of these malignancies. The theory that a case that is of a common stem cell malignancy involving the coexistence of two malignant clones, seems not to have been applied. This, we put forward, is because the existence of AML clones was not ascertained via BM or PB examination when CLL diagnosis was undertaken.

Copyright: © 2016 Wach M. This is an open-access article distributed under the terms of the Creative Commons Attribution License, which permits unrestricted use, distribution, and reproduction in any medium, provided the original author and source are credited.