The Use of HIFEM Technology in the Treatment of Pelvic Floor Muscles as a Cause of Female Sexual Dysfunction: A Multi-Center Pilot Study

The Use of HIFEM Technology in the Treatment of Pelvic Floor Muscles as a Cause of Female Sexual Dysfunction: A Multi-Center Pilot Study

Introduction: Pelvic Floor Muscles (PFM) supports the pelvic floor organs, control continence and is crucial for adequate genital arousal and attainment of an orgasm. Due to the aging process, post-delivery condition or menopause, the PFM weaken. Therefore, they do not provide sufficient support to pelvic organs, bladder control, and they may negatively affect intimate satisfaction.

Aim: We aimed to investigate the High-Intensity Focused Electromagnetic (HIFEM) technology for strengthening of PFM in women with impeded sexual functioning.

Conclusion: Our initial experience shows that HIFEM technology is a promising method in addressing women’s decreased sexual satisfaction through the strengthening of PFM.

Healthy sexual function is an essential component of life. Sexual dysfunction can, therefore, have a negative impact on female wellbeing [1]. Female Sexual Dysfunction (FSD) is age-dependent and highly prevalent in premenopausal and menopausal women. Available studies report on the prevalence of sexual dysfunction in the female population to be ranging between 25% and 63% [2-9]. The incidence in women younger than 25 years was found to be approximately 20% while in women aged 55-74 years the incidence was up to 80% [7].

Pelvic floor and its functioning are closely linked to a healthy female sexual cycle. It is formed by several pelvic muscles which support the pelvic organs and maintain their normal function by keeping these organs in their anatomical position. Pelvic Floor Muscles (PFM) also play an important role in pregnancy parturition, attainment of orgasm [10-12] and are responsible for adequate genital arousal [13,14]. Firmer muscle tone adds intensity to the muscle contractions during orgasm and enables a woman to identify, isolate, and command PFM [14].

Any insult to the pelvic floor can potentially lead to denervation of the female erectile tissues followed with sexual dysfunction [10,15,16]. The main cause for the development of Pelvic Floor Disorder (PFD) occurs when the PFM and connective tissue weaken. Weak or deconditioned muscles may provide insufficient activity necessary for vaginal friction or blood flow, and thus inhibit orgasmic potential [13,14]. Therefore the initial approach for the treatment of PFD and FSD is to start with the strengthening of PFM [11,12,17].

Non-invasive addressing of PFM should be the first treatment option prior to any surgical intervention. A novel approach for noninvasive targeting of PFM is a treatment based on High-Intensity Focused Electromagnetic (HIFEM) technology. The HIFEM technology triggers intense PFM contractions by depolarizing motoneurons and inducing electric currents in the pelvic floor area. The focused electromagnetic energy penetrates into the depth of up to 10 cm into the pelvic floor area where it induces supramaximal and brain-independent contractions at high repetition rates [18,19].

Due to the intense repetitive muscle stimulation combined with the vasodilating effect of electromagnetic fields and restoration of the muscle tonus, we assume that HIFEM may positively affect female intimate health and sexual functions. The subject of the study is a device based on HIFEM technology (BTL EMSELLA, BTL Industries Inc., Boston MA), which is FDA cleared for strengthening of pelvic floor muscles in the treatment of female urinary incontinence (UI).

Previous studies [18,19] investigating the HIFEM technology for UI proved that female patients reported a significant decrease in incontinence symptoms as well as a reduction in usage of incontinence pads. As the HIFEM technology impacts the PFM due to its myostimulatory effect, it could be beneficial not only in bladder control, but also in improvement of intimate life and sexual functions.

We aimed to investigate the myostimulatory effect of a High- Intensity Focused Electromagnetic (HIFEM) technology on PFM in women who reported impeded sexual functioning. We hypothesized that HIFEM can strengthen PFM and as a consequence will improve the quality of intimate life.

This was a retrospective single-arm study of the patients who had been admitted to our department between 2017-2018. A total of 30 female patients (average age 36.41 ± 5.62) were enrolled. The inclusion criteria included initial impeded sexual functioning through limited arousal, impaired ability to achieve orgasm and increased intercourse pain.

Patients with pregnancy, metal implants, tumor, blood coagulation disorder, and vaginal infectious disease were excluded from the study. Before the treatments, all subjects received informed consent about the treatment procedure and signed written consent.

The patients received a treatment procedure applied to the PFM using the BTL EMSELLA device (BTL Industries Inc., Boston MA) based on HIFEM technology. The device consists of a control unit and a cable connecting the unit to a chair with an in-built circular coil. During the treatment, the device generates a focused electromagnetic field with intensities of up to 2.5 T and penetrating into depths of up to 10 cm.

During the treatment, patients were seated on the chair and remained fully clothed. Prior to the therapy, each of the patients received verbal instructions about the course of the therapy and about the principles of supramaximal PFM contractions. Contractions are supposed to help them to identify, isolate and command their PFM.

After the instructions, the patients were positioned on the chair and the optimal position for inducing muscle contractions was identified. Then, the therapy was initiated with low intensity which was continuously adjusted during the treatment in accordance with patient tolerance threshold [18,19].

As a standard part of the treatment procedure, all of the 30 enrolled subjects reported patient’s feedback in the form of the standardized Female Sexual Function Index (FSFI) questionnaire pre- and posttreatment, and during the 3-month follow-up visit [20]. Obtained feedback was statistically analyzed by comparing the pre- and postintervention patients' condition.

A normal data distribution has been assumed (0.05 significance level), therefore the parametric Student t-test was used to calculate the significance of FSFI full-scale scores and individual FSFI sections. Furthermore, Pearson correlation coefficient was calculated for paired items Arousal/Lubrication, Lubrication/Orgasm, Orgasm/Satisfaction, and Pain/Desire. Bonferroni correction was applied according to the number of the carried tests. Finally, the percentage of improved patients was calculated according to the FSFI full-scale score.

The analysis of the pre-treatment FSFI questionnaires showed an average full-scale score of 20.06 ± 6.55, which according to the predefined cut-point of 26.5 indicates sexual dysfunction. The posttreatment average full-scale score significantly increased to 30.69 ± 7.55 and was maintained during 3-month follow-up at the level of 30.29 ± 7.37 (p<0.001). The total FSFI scores are shown in Figure 1. 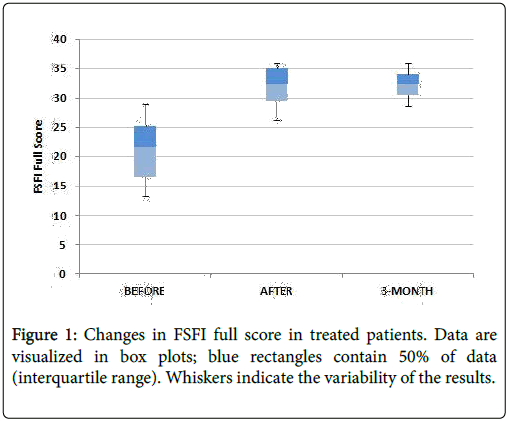 The spread of whiskers and Interquartile Range (IQR) in the Figure 1 indicate the variability of the results obtained at the baseline. Before the treatments, there were patients with substantially lower FSFI score indicating moderate sexual function issues.

After the procedure consisting of 6 treatments the score significantly increased and also the variability of the data was reduced. At the 3- month follow-up, these results sustained showing no shift in the average, while the patient’s scores were spread closely around the median.

The level of average improvement in the FSFI score, expressed in percentage, was on average 53% after the last treatment and was maintained at 51% (p<0.001) during the 3-month follow-up. Immediately after the 6th treatment, an improvement in FSFI score was observed in 28 (93%) subjects. During the follow-up appointment, all of the patients (n=30, 100%) reached a certain degree of improvement.

The results suggest that the treatment procedure with HIFEM technology leads to significant improvement of the intimate life in female patients with FSD. The improvement was observed in all sections of the FSFI questionnaire in both short- and long-term results.

We contribute this improvement to well-structured intense pelvic floor workout delivered through HIFEM, induced supramaximal PFM contractions consequently accompanied with increased blood flow [21]. The correlation analysis showed a positive strong relationship between lubrication and orgasm, indicating that the treatments improved the vaginal lubrication of the patients which then was reflected in the increased ability to achieve orgasm.

Similarly, strong correlation was found between the orgasm and satisfaction. This indicates that the patients were able to reach orgasm easily which was logically reflected in their sexual satisfaction. On contrary, no correlation was found between the pain and the desire even though it could be assumed that reduced pain would lead to increased sexual desire [22,23].

The importance of PFM strength during intercourse was described by the previous authors [10-17,24-28] whose results correlate with our findings. Piassarolli et al. concluded that increased EMG activity of PFM muscles was associated with the improvement in all FSFI items [25]. Kanter et al. found that among sexually active women (n=370), a strong pelvic floor was associated with higher scores in the FSFI orgasm domain [11].

The results of our study correlate with this research as the most significant improvement was observed in sexual satisfaction, desire, and orgasm domain. Similar results were reported by Martinez et al. where women with stronger PFM scored higher in the domains: desire, excitement, orgasm and also reported higher levels of FSFI score [26]. Authors also reported a moderate correlation between PFM strength and sexual satisfaction as well as between lubrication and PFM strength. This was also supported by findings from Lowenstein et al. stating that women with strong or moderately strong PFM scored significantly higher on the FSFI orgasmic and arousal domains than women with weak PFM [27].

The duration of PFM contraction was correlated with FSFI orgasmic domain and sexual arousal. Their finding suggests that both the orgasm and arousal function are related to better PFM function. Furthermore, Aydın et al. reported that Vaginal Electrostimulation (VES) treatment leads to improvement of total FSFI score, particularly in arousal, desire, orgasm, and satisfaction sections [29]. They observed no significant changes in pain or lubrication domains. Comparing to our study, pain was the part where we observed the lowest level of improvement. However, we would like to highlight that the VES includes an intravaginal probe which is not comfortable for the patient, while the BTL Emsella procedure is performed fully clothed and without a need of intravaginal probe.

The results show the importance of PFM in female intimate life and the fact, that they can be addressed in a non-invasive way. Both sexual dysfunctions and incontinence are strongly affected by the actual condition of PFM and as such, these two indications frequently accompany each other. The treatments are ideal for improving both aspects in patients with weak pelvic muscles and are thus an alternative not only to women who experience leakage issues but also to those who feel their sexual satisfaction is impeded and could be improved.

The obtained FSFI data showed a significant improvement in female sexual function through the strengthening of PFM. The data suggest BTL EMSELLA as an effective tool for improving patient’s sexual life satisfaction and as such, it is a promising alternative to existing treatment options and deserves further investigation.

Citation: Hlavinka TC, Turcan P, Bader A (2019) The Use of HIFEM Technology in the Treatment of Pelvic Floor Muscles as a Cause of Female Sexual Dysfunction: A Multi-Center Pilot Study. J Women's Health Care 8:455.

Copyright: © 2019 Hlavinka TC, et al. This is an open-access article distributed under the terms of the Creative Commons Attribution License, which permits unrestricted use, distribution, and reproduction in any medium, provided the original author and source are credited.