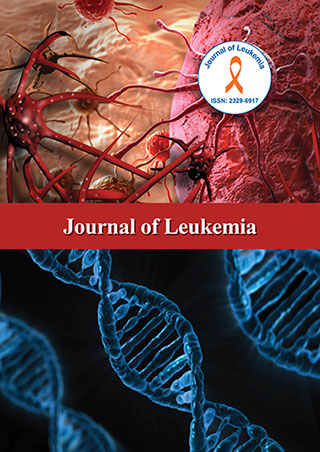 One characteristic of the erythroid terminal differentiation is hemoglobin expression and enucleation. In the present study, by using real-time cultured Friend Virus Anemia-inducing (FVA) cells, scanning electron microscopy (SEM), immunofluorescence combined with laser scanning confocal microscopy (LSCM), the FVA cells induced by Erythropoietin (EPO) for were used for: 1) to study the shape and proportion of cells at different differentiating stages, enucleation process, the formation of blood islands, and engulfment of nuclei by macrophages in real time, 2) to quantitatively analyze erythroid cell surface markers including CD71 and Ter119, and cytoskeletal-associated proteins (stathmin, septin8 and RBBP4). The results of real-time monitoring of enucleation indicated that it took about 7 to 8 hours to extrude the nuclei from karyopyknosis (polychromatic erythroblasts). It further showed that the macrophages engulfed the expelled erythroid nuclei. SEM showed a variety of shapes of the nascent reticulocytes. In the process of erythroid differentiation, expressiosn of both the transferring receptors CD71 and Ter119 were higher than that of adult blood cells, whereas, cytoskeletal-associated proteins (stathmin, septin8 and RBBP4) decreased gradually. Therefore, systematic observation of the process of differentiation and enucleation will provide a deeper understanding of cellular and molecular mechanisms for erythroid differentiation and carcinogenesis.

Erythroid differentiation is a complex process, and the terminally differentiated cells are characterized by shrinkage of the cells, karyopyknosis, enucleation, and ultimately differentiating into mature red blood cells. Mice were injected with FVA, and the erythroid cells from their spleen were synchronized as proerythroblast and retained the differentiation characteristics of Colony Forming Unit-Erythroid (CFU-E) cells [1-3]. Therefore, the medium was supplemented with EPO in the culture, the cells mainly generated basophilic erythroblasts at 12 h to 24 h, polychromatic erythroblasts at 36 h, dominantly orthochromatic erythroblasts and reticulocytes at 48 h to 60 h [4]. There were many changes in the cell morphology, haemoglobin accumulation, the expelled nuclei were wrapped by small amount of cytoplasm and plasma membrane, and then formed reticulocytes [5,6] in the process of differentiation.

Recently, there are a few reports regarding to the erythroid differentiation and enucleation [14,16]. However, there is still a lack of systematic study about cell morphology at various differentiation stages, surface markers, changes in cell number, the time needed for enucleation and polymorphism of the nascent reticulocytes.

This research has systematically studied the morphology and enucleation at various differentiation stages of the FVA cells. It took about 7 to 8 hours from polychromatic erythroblasts to the exclusion of nuclei and showed a variety of shapes of the nascent reticulocytes.

Benzidine and Wright’s staining for the morphology of erythroid cells

Benzidine staining: FVA cells were collected and then centrifuged at 1000 rpm for 3 min, stained with 100 μL of 0.02% benzidine dye (Yuanhang, Shanghai, China) premixed with 30% H2O2, and then examined. Wright’s stain: FVA cells were fixed with 4% paraformaldehyde for 20 min., and stained according to the established procedure [17] described elsewhere, and then examined with Nikon ECLIPSE TE2000-U microscope.

The sizes of FVA cells

Morphology of macrophages during erythroid differentiation

MurineErythroLeukemia (MEL) cells, mouse peritoneal macrophages, and FVA cells were fixed with 4% paraformaldehyde for 20 min, washed 3 times with PBS, and stained with 500 μL DAPI (1 mg/L, KeyGEN, Nanjing, China) working solution at 37ºC for 15 min. The cells were then rinsed with methanol (Changzheng, Hangzhou, China), washed 3 times with PBS, and blocked with 1% BSA for 30 min. Furthermore, the cells were incubated with anti-CD68 primary antibody (1:200) at 4ºC overnight. After incubation, they were washed 3 times with PBST (Phosphate buffer solution with Tween 20), incubated with Cy3-conjugate goat anti-rabbit IgG (1:10,000) for 1 h, rinsed with PBST. Anti-fade mounting medium was then added and observed with Nikon C1SI LSCM.

FVA cells were seeded at a concentration of 1×106 /mL, EPO (2×10-4 IU/L) was added and the cells were grown in 5% CO2 at 37ºC in miniature incubator for real-time cultured cell monitoring. These cells in the same position were imaged one frame per minute for 48 h.

FVA cells, mouse bone marrow cells, mouse blood cells, MEL cells and NIH3T3 cells were fixed with 4% paraformaldehyde for 20 min, washed 3 times with PBS, and blocked with 1% BSA for 30 min. The samples were then incubated with CD71 (1:3,000) or Ter119 (1:6,000) antibodies at 4°C overnight and then washed 3 times with PBST, incubated with Cy3-conjugate secondary antibody (goat anti-rabbit) IgG (1:10,000) and FITC-conjugate secondary antibody (goat anti-mouse) IgG (1:10,000) for 1 h. They were then rinsed with PBST and anti-fading agent was added, and then observed with LSCM. Results were quantified using the EZ-C1 3.20 software for CD71 and TER119. All data were expressed as means ± SD of three independent experiments.

The expression of stathmin, RBBP4, and septin8 in erythroid cells

Immunofluorescence was combined with LSCM to detect the expression of the three cytoskeletal-associated proteins, i.e. stathmin, RBBP4, and septin8.

Quantitative experimental data were expressed as mean ± SD and analyzed using IBM SPSS Statistics 21.0 software with t-test. The difference with P <0.05 was regarded as statistically significant.

As shown in Figure 1, the weight of the normal adult mouse spleen was about 0.1 g, that increased to 1~1.5 g due to the cells being synchronized as proerythroblasts after transfection with FVA that increased the blood volume of spleen. Change in the sizes of FVA Cells 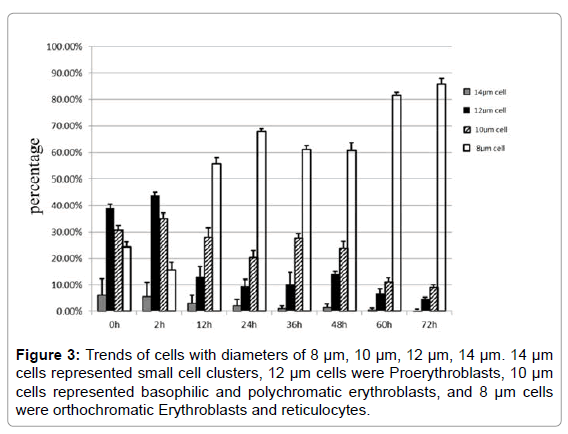 The SEM results of the whole process of enucleation are shown in Figure 5. Before enucleation, the nucleus deviated and then the cytoplasm extended into a gourd shape. During the process, the nuclear was extruded from the cell and the entire nuclear and cytoplasm was separated. The nascent reticulocytes formed irregular shapes after enucleation (Figure 6). Figure 7a-f show that it spent about 7-8 hours from the karyopyknosis to enucleation, and ultimately the formation of reticulocytes. During differentiation, the cellular volumes were gradually decreased, and the cells eventually changed from the original round nucleated cells to enucleated reticulocytes. Morphologic changes of the macrophages during erythroid differentiation

As shown in Figure 8a-b, erythroid cells gathered around macrophages and the number was gradually increased, then the macrophages became large gradually due to engulfment of nuclei (Figure 8c-d). Fetal liver cells from E14.5 d fetal mouse cultured in vitro had similar results (Figure 9). Furthermore, the macrophage-specific cell surface marker CD68 confirmed that it was macrophage. The volumes of the macrophages increased tremendously due to the endocytosis of naked nuclei. After 72 h, macrophages expanded into oval shapes, and their volumes were decreased with the intracellular naked nuclei being gradually digested (Figure 10). Figure 8: Wright’s staining results of blood islands during Erythroid differentiation. (a-c) Engulfing nuclei by macrophage, (d) The shrunken cells due to the digestion of the nuclei. Bar =10 μm. Transferrin receptor (CD71) was involved in the absorption of iron and essential proteins that regulate the cell growth [18]. Presence of Ter119 was a sign of nucleated red blood cells. The expression of both markers could be used to determine the differentiation capability of erythroid cells. FVA cells cultured for 12 h, mouse bone marrow cells, mouse peripheral blood cells, MEL cells and NIH3T3 cells were tested. The results showed a decrease in CD71 and Ter119 expression from erythroid cells to NIH3T3 cells (Figure 11). The expression of both the proteins (CD71 and Ter119) in FVA cells cultured for 12 h were significantly higher than that of bone marrow cells and peripheral blood cells (Table 2). 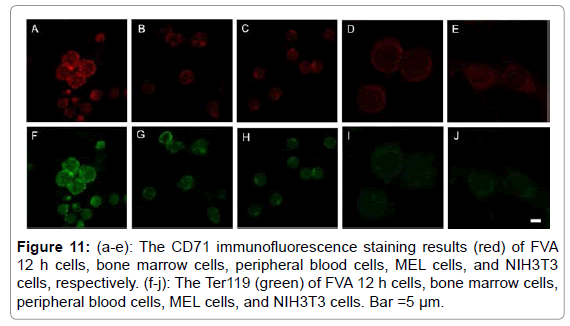 Expression of the three cytoskeletal-associated proteins in eythroblast

The expression of three cytoskeletal-associated proteins (stathmin, RBBP4, and septin8) was decreased in the order of proerythroblasts, basophilic, polychromatic, and orthochromatic erythroblasts (Figure 12). 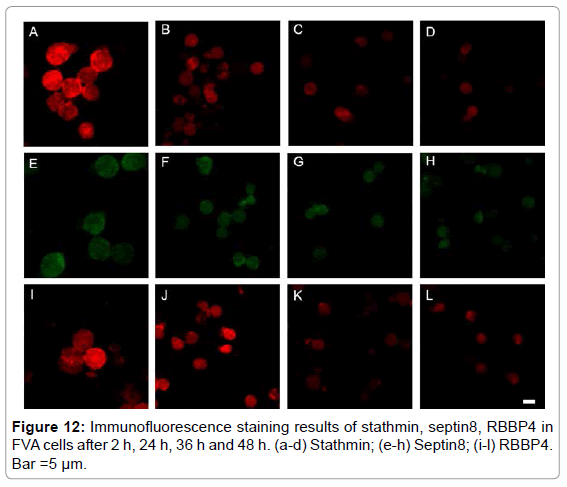 Enucleation in the terminal differentiation of erythroblast is a multi-step complex process in which the nucleus, membrane, and cytoskeletal system are all involved. In this study, FVA cells were used for systematically studying the processes of differentiation and enucleation. By the stimulation of EPO, FVA cells proliferated and synergetically differentiated into basophilic, polychromatic, and orthochromatic erythroblasts. SEM results showed karyopyknosis, nuclear deviation, enucleation, and then generation of reticulocytes.

Real-time monitoring results showed it took about 7~8 hours from karyopyknosis to enucleation. During differentiation, immature nucleated cells gradually gathered around macrophages. Macrophages then engulfed the extruded nuclei, resulting in increased volumes at first and narrowed volumes later because the nuclei were digested in the latter phase.

The microtubule depolymerization protein stathmin is a member of the protein family, which regulates the microtubule cytoskeleton. It also regulates microtubule polymerization via promoting microtubule depolymerization and preventing tubulin heterodimers [21]. Septin8 is a member of class conserved cytoskeletal GTP-binding proteins. It plays an important role in cell division, cell polarization, vesicle trafficking, membrane remodeling and many other important physiological processes [22]. Histone-binding protein RBBP4 is a component of ATP-dependent chromosomal rearrangements complex, such as the nuclear chromatin remodeling and histone deacetylase complexes Sin3, and regulates the functions of the Sin3 [23]. The contents of the three cytoskeletal-associated proteins (stathmin, septin8, and RBBP4) decrease gradually during differentiation.

During the development and differentiation of mammalian erythroid cells, the changes in cell morphology and gene expression are showed regularity [24]. Enucleation is regulated by microtubules and PI3K signaling in a manner mechanistically similar to directed cell locomotion [25]. However, most molecular events in enucleation remain unclear, which gene regulates this process is not clear. Functions of cytoskeletal proteins, gene regulation and the mechanism of Erythroid differentiation need to be clarified by further studies.

Copyright: © 2015 Yang Z, et al. This is an open-access article distributed under the terms of the Creative Commons Attribution License, which permits unrestricted use, distribution, and reproduction in any medium, provided the original author and source are credited.