Objective: We investigated a long outbreak of a nosocomial infection of Acinetobacter baumannii (A. baumannii) in the neonatal intensive care unit (NICU) of Vali-Asr teaching hospital in Tehran, Iran.

Methods: Within a 19-month period, 25 neonates infected with A. baumannii were discovered. We divided the outbreak period into two groups according to the time they were infected. Group 1 was comprised of cases infected with A. baumannii from February to May 2016 (12 cases), and group 2 was neonates infected from November 2014 to January 2016 (13 cases). Identification of A. baumannii was executed by the phenotypic standards. Logistic regression analysis and multiple correspondence analyses (MCA) were used for comparison of groups with various variables.

Results: This outbreak had a common source with intermittent exposure, it ascended gradually and plateaued. Overall, 68.0% of the neonates had a birth weight of 2,499 grams or less, and 84% were born preterm. Of the 25 infants, bloodstream involvement was present in 8 (66.7%) and 10 (76.9%) (P-value=0.450), and infection in trachea occurred in 7 (53.8%) and 3 (25.0%) (P-value=0.144) in group 1 and 2 respectively. In multiple logistic regression analysis, the number of prescribed antibiotics had a significant positive effect on increasing the slope in the epidemic curve (group 1). The first and second dimensions presented in MCA were 54.25% and 20.45% respectively. Three categories concluded prescription of amphotericin, fluconazole, and being in group 1 was placed in very close coordination both in dimension 1 and 2.

Conclusion: It seems that the antifungals and number of prescribed antibiotics played an important role in intensifying the outbreak of A. baumannii infection.

The development of biology, genetics, medicine, pharmacy at the end of XX century, bring along cloning of mammals, made the map of the human genome, genetic investigation and gene therapy reach new successes, assisted reproduction to become available procedure

Nosocomial infections are one of the leading causes of mortality and morbidity in hospitals [1-3]. Acinetobacter, an important nosocomial pathogen, is known as an agent of septicemia, or blood poisoning, in Neonatal Intensive Care Units (NICUs) worldwide [4- 6]. So far, numerous nosocomial outbreaks caused by Acinetobacter have been reported globally [7-11]. A. baumannii, the most common species of the Acinetobacter genus, is a micro-organism that has become an important nosocomial pathogen, particularly in intensive care units (ICUs) [2,12,13]. A. baumannii outbreaks have been traced to environmental sources, such as patients’ mattresses, air conditioners, and mechanical ventilation equipment [14]. There is a hypothesis that antifungal drugs significantly reduce neonates’ immune system and thereby increase chance of infection of nosocomial agents such as A. baumannii [15].

The overall mortality rate from blood poisoning by A. baumannii has ranged from 34.0% to 43.4% in ICUs [16]. Bacteremia by A. baumannii is usually caused by intravascular and respiratory tract catheters [17].

According to United States National Nosocomial Infections Surveillance documentation, A. baumannii has been isolated in 6.9% of pneumonia and 2.4% of bloodstream infections [18]. A. baumannii is an uncommon cause of Urinary Tract Infection (UTI) and it is responsible for only 1.6% of ICU-acquired UTIs [16].

Factors associated with A. baumannii infection in neonates include, age, gestational age and weight [1], antibiotic exposure, hospitalization duration in ICU, mechanical ventilations, and the severity of underlying illness [19]. Increasing rates of A. baumannii infections may be due to delays in infection control practices [20].

Here we describe an outbreak of nosocomial infection of A. baumannii in the Vali-Asr Hospital NICU over the course of 19 months period.

Vali-Asr Hospital, a tertiary hospital, is one of the branches Imam Khomeini Hospital Complex, a center considered the largest hospital in the Middle East in terms of therapeutic processes. The NICU of Vali-Asr, a Teaching Hospital affiliated with the Tehran University of Medical Sciences, has 39 beds and appropriate equipment for neonates requiring intensive care such as, mechanical ventilation, cardiac cares, and other. From November 2014 until May 2016 (19 months), 889 neonates were admitted to the NICU for various causes. Of these, 25 neonates developed nosocomial infections from A. baumannii.

The medical and demographic information recorded by the hospital registry system was used for comparison. The variables included, birth weight, gestational age, gender, weight in inpatient day, duration of hospitalization, Apgar score at one and five minutes, output of admission (dead or discharged), mothers’ and babies’ underlying disease, cause of inpatient, incubator care, use of antibiotics, name of antibiotics, use of mechanical ventilation, central or peripheral venous catheter, Granulocyte-Colony Stimulating Factor (G-CSF), chest tube, and surfactant.

Blood samples of these neonates were collected and processed by standard bacteriological technique for the isolation of A. baumannii species. The bacteria’s cell and colony morphology are typically, short, almost round, and rod-shaped. A. baumannii reacts positively to a catalase test and negatively to an oxidase test and has an absence of motility [20]. The identification of A. baumannii was based on growth at 37°C and 42°C, glucose oxidation, gelatin liquefaction, negative hemolysis, arginine hydrolase, nitrate and nitrite reduction, utilization of citrate, and resistance to penicillin [20].

Data are expressed as mean and Standard Deviations (SD) or frequency (proportions). Continuous data were analyzed for normality using the Shapiro–Wilk test of normality. Multiple logistic regression analysis was used to assess the independent effects of significant variables in the univariate analysis. The distribution of hospitalization duration among discharged (alive) infants between groups 1 and 2 was not parametric and analyzed by Mann-Whitney U test.

Multiple Correspondence Analyses (MCA) was accomplished for discrimination of variables of groups (group 1 and 2) and various prescribed antibiotics.

MCA is part of descriptive methods that reveal modeling in complex datasets. However, MCA is used to represent and model datasets as clouds of points in a multidimensional Euclidean space; in other words, it is distinctive in describing the patterns geometrically by locating each category or unit of variables in analysis as a point in a low-dimensional space [21]. The results are interpreted on the basis of the relative positions of the points and their distribution along the dimensions. The data was analyzed with SPSS-20 software (IBM, Armonk, NY, USA) and a p-value of <0.05 was considered significant. Figure 1: The Epidemic curve of occurrence nosocomial A. baumannii in NICU based on month.

Most likely, the index case was a male infant admitted in November 24, 2014. He was born in the same hospital and because of neonatal respiratory distress syndrome was transferred to the NICU on the first day following his birth. He developed septicemia in the NICU and was given colistin as a monotherapy. His mother had Premature Rupture of the Membranes (PROM). It should be noted that this suspected index case was the only one of the neonates in the study whose mother had taken antifungal or antibiotic medication during her pregnancy.

Except for one of the cases, all infants were delivered vaginally. Also, 4 patients had a history of surgery, 2 had duodenal and esophageal atresia surgeries respectively, and 2 had gastrointestinal perforation surgeries.

Eighty percent of the strains involved in the outbreak were drug resistant. But we did not have access to complete information of each of the infants individually. All mothers were in prenatal care during pregnancy and they reported to be non-smokers. Of the 25 mothers, 12 of them suffered from chronic disease. The abstraction of distribution of underlying disease and PROM history in mothers can be seen in Table 1.

*Each mother may have more than one chronic disease

Table 1: The distribution of underlying disease and PROM history in mothers.

The outbreak became more intense from February to May 2016 when 12 neonates became infected within 4 months.

We chose to divide the outbreak period into two groups; one, infected infants from February to May 2016 (12 cases in 4 months), and second group (group 2), infected infants from November 2014 to January 2016 (13 cases in 15 months). The criteria for this division were significantly different in the number of A. baumannii infected inpatients in comparison to time periods. In other words, the slope of group 1 in an epidemic curve was significantly steeper upward. Table 2 for complete information regarding the cause of admission to the NICU among the two groups of neonates infected with A. baumannii.

The mean (SD) and median (IQR) of admission days categorized by groups and outcome of hospitalization (discharge or death) is reported in Table 3.

We analyzed the adjusted effect of some variables in two groups in Table 4.

Table 4: Adjusted effect of some variables in two groups by multiple regression analysis.

Table 5: The summary of aids or auxiliary products used in two groups. 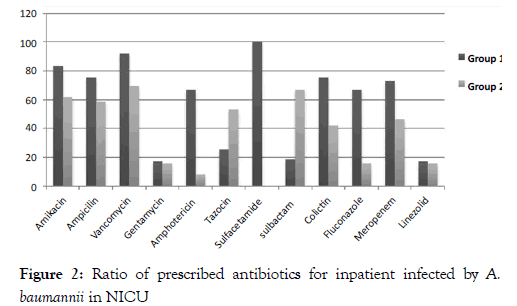 Figure 2: Ratio of prescribed antibiotics for inpatient infected by A. baumannii in NICU

In MCA, a two-dimension was considered. The first and second dimensions presented were inertia percentages, 54.25% and 20.45% respectively (Figure 3). 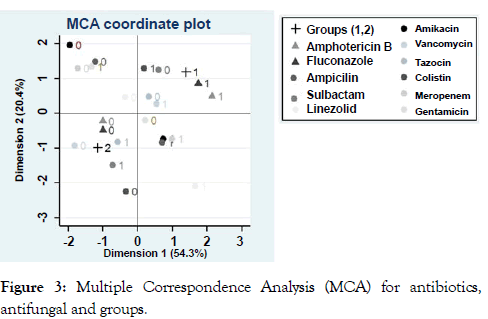 The most discriminant categorizes for dimension 1 hierarchically were amphotericin, linezolid, fluconazole prescription, and A. baumannii infected infants in group 1. The discrimination range was between 1 and 2, and in the second dimension, amikacin and colistin prescription was analyzed visually.

We have reported an outbreak of A. baumannii in a NICU during a 19 month period which affected 25 neonates. Overall, 100% of the infants were admitted to the NICU within their first 24 hours birth. Based on the results of some studies, being younger than 7 days old is a risk factor for nosocomial infection [2,6,22]. In our study, 48% (12 cases) and 60% (15 cases) of the neonates had a VLBW (<1500 g) and were very preterm (<32 weeks gestational age) respectively. Studies assert that neonates with VLBW and low gestational age are expected to have higher rates of nosocomial infections in NICUs. Premature neonates are at particularly high risk of nosocomial infection because of a flaw in their defensive maternal antibody and initial immature inherent immunity [1].

Majority of studies reporting A. baumannii outbreaks predominantly involved ICU patients requiring intubation and mechanical ventilation [20]. In our study, 52% of neonates used mechanical ventilation, 6% venous catheter, and 9% required a chest tube. Unfortunately, we did not have access to auxiliary products or infection cultures. On the basis of some studies, the duration of hospitalization is of risk factors related to A. baumannii infection [2,23]. The mean (SD) of this variable in our study was 49.57 (29.25) and 78.5 (56.21) days in group 1 and 2 respectively and a significant difference was not observed between the two groups.

We tried to detect causal factors that affected the increasing slope in the epidemic curve. In multiple regression analysis, number of antibiotics prescribed had a positive effect on slope steep (p-value<0.043).

In MCA, the use of amphotericin and fluconazole had a positive effect in increasing A. baumannii infected patients. These drugs are antifungal medication and used for serious fungal infections. Use of prophylactic fluconazole has reduced the colonization and systemic infections in extremely low birth weight and VLBW infants in a study, While Manzoni et al. are not recommended antifungal prophylaxis agents such as fluconazole in any neonatal population [25]. Also a Cochrane Review in 2005 reported that there is insufficient evidence to support the prophylactic of antifungal agents in VLBW [15].

In the present study, the use of amphotericin and fluconazole and number of prescription antibiotics were effective in increasing the incidence of nosocomial infections. Assumption of a weakened immune system caused by A. baumannii is almost not possible because there was no significant difference between gestation age, weight, and other medical variables in group 1 and 2, the day of birth and admission was the same too in all neonates.

Many thanks of experts, nurses and laboratory staff for sincere cooperation. And of Mrs. Lesley Carson for Editorial Solutions

Ethics approval and consent to participate: This study was approved by the Institutional Ethical Board Committee at Tehran University of Medical Sciences; R.TUMS.IKHC.REC.1397.138

No external funding was used in support of this study.

All authors report no conflicts of interest relevant to this article.