The self-rotation of the Earth solid inner core is analyzed to show the influence on the motion of the planet. Existing direction of the rotation gives new attracting force directed toward the Sun (~1011 N for the inner core only at this moment). The opposite direction of the self-rotation gives new rejecting force relative to our star. Corresponding similarity could be found in aerodynamics in the case of rotating or not rotating cylinder in the stream. The physical reasons for these results is based on the non-homogeneous gravity field of the Sun. Theoretically, the Earth could move toward the Sun during the millenniums (global warming) and contrary, out of the Sun, in the case of opposite self–rotation (ice period). Non-homogeneous gravity field of the Sun slows down angular velocity of the Earth in the case of existing self-rotation and accelerates the same one in another mentioned case.

The question arise does the Earth self-rotation has the influence on its motion? What would be happened in the case of opposite rotation? Must the cause always generate the consequence? Let see what mechanics and mathematics say. The vertical moment balance analysis, mentioned in the article below [1], could be extended by the force equilibrium calculation.

In accordance with Coriolis Effect force components normal to the axis of the Sun appear (Figure 1). 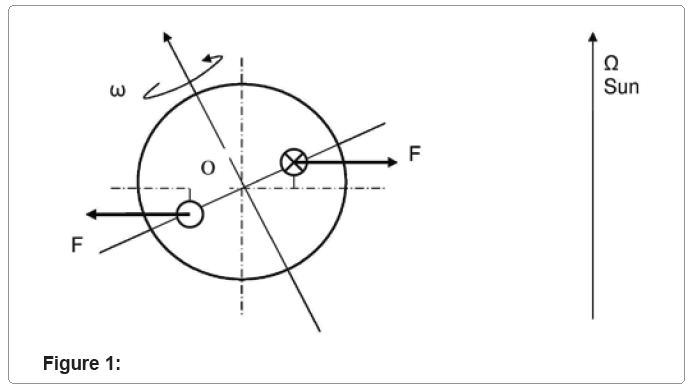 The only interesting components (projections) are in the presented plane. The other components in the plane normal to this are balanced giving zero values.

So, in accordance with famous dynamics relations each part of the inner core is affected by Coriolis forces

where m-mass of the part, v-part velocity and Ω-angular velocity of the Earth around the Sun.

Because the mass could be expressed via density and volume 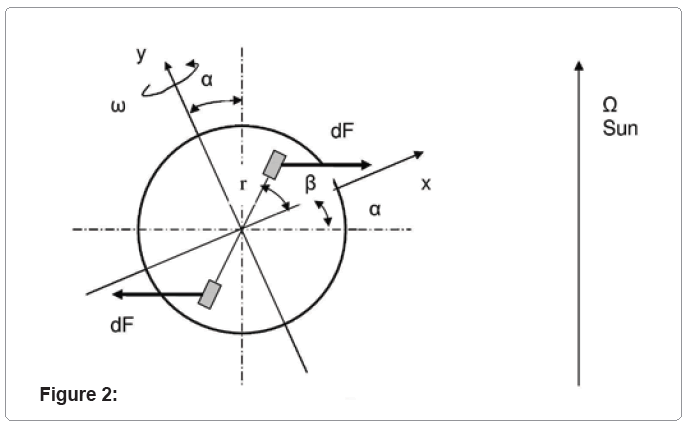 Where are δ angle in the direction of own rotation of the core, part velocity.

The results are obtained by numerical integration.

It should be underlined again that the core is not material point in this analysis but a huge 3D rigid body, with all the consequences following the approach. It means officially calculated tangential velocity of the Earth (core) around the Sun is related to only one point of the rotation axis of the big bowl, to its center O, at this moment. All other points of the axis have different velocities. The points further from the center O, and from the axis of the Sun, precede, causing major velocities. In accordance with this all the points near the axis of the Sun have the smaller ones (Figure 3). 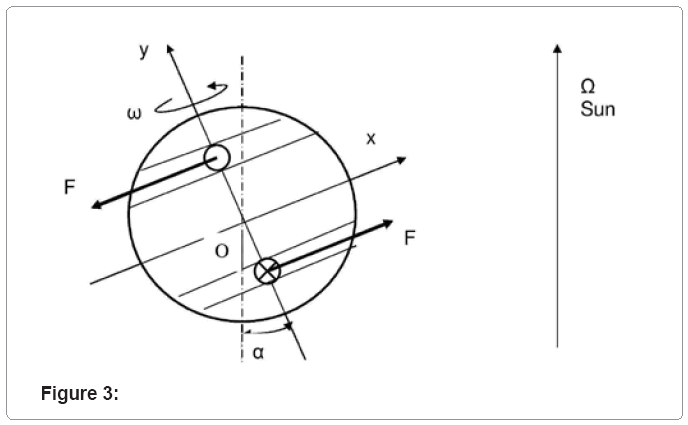 Corresponding effect of the circular motion of the rigid body could be expressed in the next way:

Proportions give real velocities of the single points of the core (Figure 4). 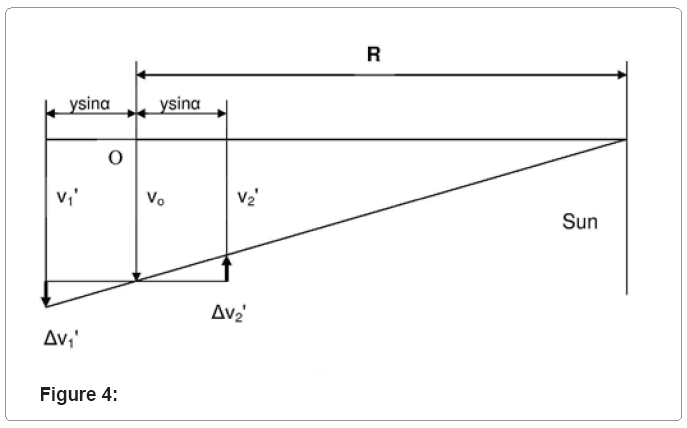 Existed precedence of the core points further from the Sun compare to the point O is heightened by the fact that orbit motion law is not linear. These parts additionally precede in their bustle relative to the necessary average velocity providing the planet path. The other points retard, more than accelerated ones. So, in accordance with Figure 5. 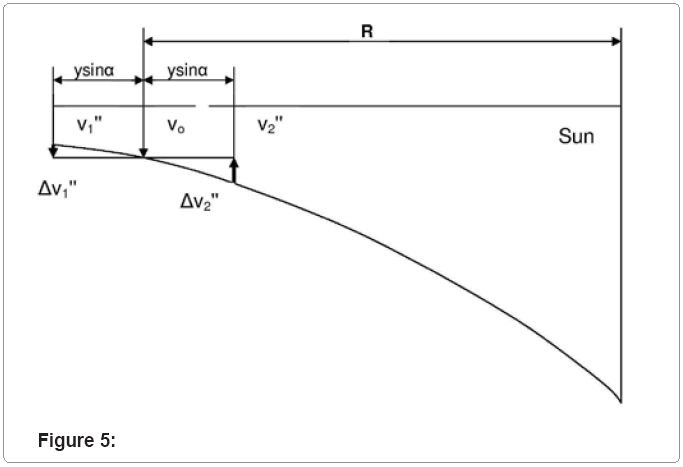 In accordance with famous dynamics relationships shadowed part of the core (Figure 6) is attacked by Coriolis forces. The results are obtained by the numerical integration.

In accordance with official knowledge the resultant force of FS and FG should be zero, having in mind zero resultant of the “main” centrifugal and gravity forces providing relatively same distance between the planet and the Sun.

But it is not. A small force appears attracting the Earth toward the Sun: 3.23E11 N for core eccentricity of 1.000000357, its angular velocity of 7.27E-5 1/s and distance from the Sun of 1.47E11 m. The force is not complete of course because the inner core is taken into account only. Nevertheless, it exists. In the case of opposite angular rotation the formulas give the same intensity of the force but orientated contrary-out of the Solar System. That means different orientations of the angular velocities of the planet give small but significant attractive and repulsive forces related to the Sun (Figure 7). 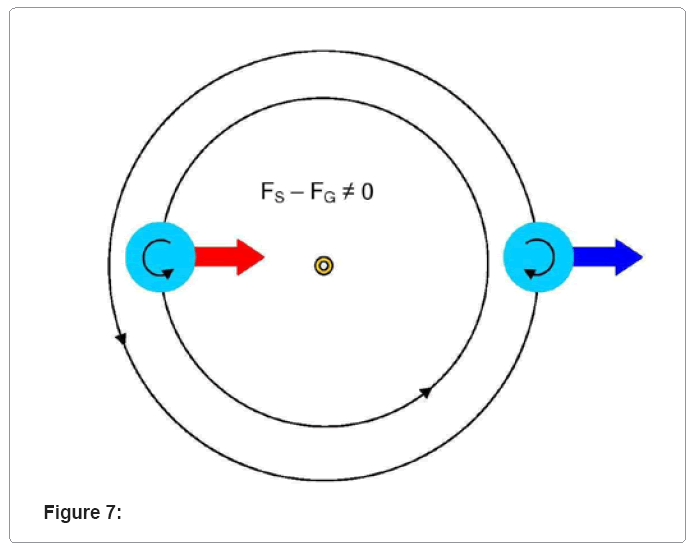 It is very important to underline that there is no radial force equilibrium in the case of the planet motions having self - rotations. Corresponding sum of the forces is not equal to zero. Such planets are pulled in one of two possible directions. Is it reasonable? It seems, yes. Kutta–Joukowski theorem and Magnus effect, coming from aerodynamics, describe the phenomenon concerning to this. The spinning objects flying in a fluid experience the force perpendicular to the line of motion. In many ball sports the Magnus effect is responsible for the curved motion of a spinning ball (Figure 8). 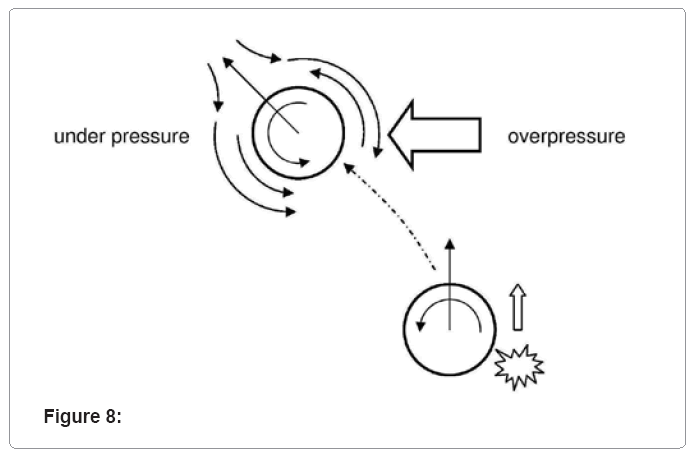 Observation related to the fact the Earth is not in the fluid is suspicious. Quantum physics can’t explain almost anything without something as ether (again). So subtle medium could provoke adequate event with so small resultant force, pushing the planet easily during the thousands of years, imperceptibly for our eyes, toward the global warming now, toward the ice period “tomorrow”.

That what attracts and rejects the Earth slows down and accelerate its self-rotation at the same time. The main reason could be found in the energy non homogeneous surrounding environment (Figure 9).

In accordance with this we can talk about some kind of tangential energy field having the same direction as the direction of all the planets in the Sunny system. Such mathematical, gravitational or ether “river” could be accepted in harmony with personal affinity. Expressed sarcasm is the result of the state of awareness of our civilizations

The half of the planet closer to the Sun is affected by stronger part of the field compare to another one. Mentioned differences of the velocities on this side are bigger and Coriolis forces attract the Earth toward the Sun. And, something else. Earth opposes the field by its rotation in that, more significant part, causing adequate reaction by the field to slow it. The planet has its own mathematical, gravitational or ether field inappropriate to the trend at this moment. Such “friction” is present in the case of the denser core particularly. That is why it brakes best (Figure 10). 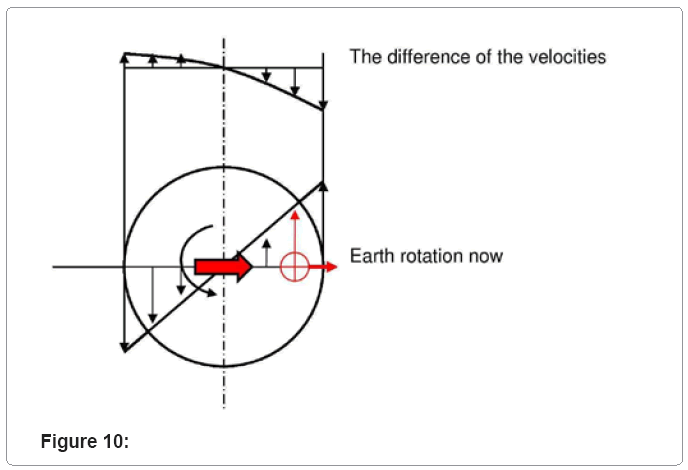 The situation is changed after new, opposite, Earth self-rotation affected by the vertical rotation. Coriolis forces push the planet further from the Sun and consistent field directions accelerate it (Figure 11). 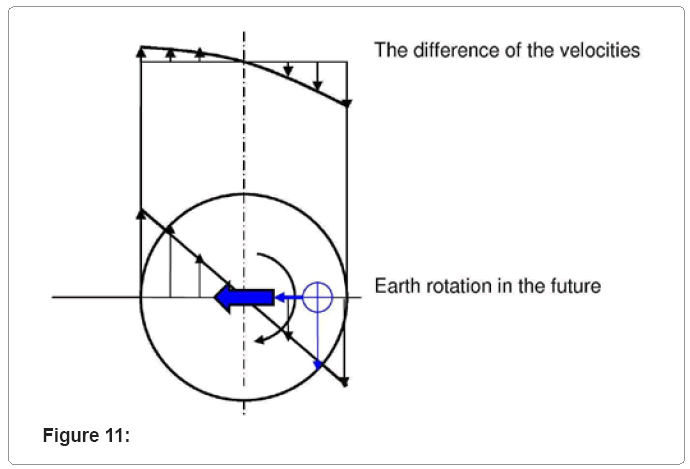 New acceleration makes new conditions for bigger “positive” deformation of the equatorial belt of the planet, giving the chance to the “sunny” moment to rotate it again causing self-rotation we know, several thousand years after.

Citation: Djordjevic S (2012) The Influence of the Self–Rotation of the Planet on Its Motion Not Covered By Gravity Law. J Geogr Nat Disast 1:101.

Copyright: © 2012 Djordjevic S. This is an open-access article distributed under the terms of the Creative Commons Attribution License, which permits unrestricted use, distribution, and reproduction in any medium, provided the original author and source are credited.
Top