Background and Objective: Owing to the hemodynamic response to pneumoperitoneum, laparoscopic is not devoid of risk; adjuvants have been used to decrease the dose of volatile agents and their side effects and to blunt the hemodynamic response. This study was designed to compare the effect of dexmedetomidine and remifentanil on sevoflurane expired fraction concentration (EF sevo) in general anesthesia, monitored by BIS. Hemodynamic response, postoperative recovery profile, analgesic requirements and PONV were also recorded.

Results: No patients had marked hypotension MAP less than 60 mmHg or bradycardia HR less than 45 in both groups but there were significant decrease in HR and MAP between the two groups during induction, 15 min after induction, during pneumperitonium, aftert release of insufflation and 15 min after release of insufflation, extubation time, spontaneous eye movement, eye movement to verbal stimuli, spontaneous arm movement, purposeful movement and time of discharge to recovery room were significantly lower in group R than group D, However group R showed significantly higher EF sevo 15 min after induc, BSI during insufflation of CO2, EF sevo during insufflation of CO2, BSI after release. CO2, EF sevo after release of CO2, BSI before end of surgery and EF sevo before end of surgery than group D.

Conclusion: Both dexmedetomidine and remifentanil reduce the anesthetic requirement and depress the hemodynamic response during pneumoperitoneum with more significant decrease in EF sevo in the D group, however dexmedetomidine provides better postoperative analgesia and less incidence of PONV.

Laparoscopic cholecystectomy (LC) procedure is a more preferable technique than open cholecystectomy in the treatment of symptomatic cholelithiasis; [1] it reduces postoperative pain, with faster recovery and more rapid return to normal activities and lesser hospital stay [2].

Several adjuvants have been used to decrease the dose of inhalational agents and to provide better sedation, hypnosis, and analgesia [3].

Dexmedetomidine is a potent alpha-2 adrenoreceptor agonist and reduces the volatile anesthetics requirements. It has beneficial properties when used in anesthesia as it provides better hemodynamic and adrenergic stability via its sympatholytic action, sedation and decreased anesthetic and analgesic consumption without marked ventilatory depression [4]. Remifentanil is an analogue of fentanyl its rapid onset and half time of nearly three to five min make it an easy drug to control for achieving the desired depth of anesthesia and its rapid offset provides optimal analgesia without any delayed recovery [5].

The most common method of titration of volatile anesthetics is the minimum alveolar concentration (MAC) but, this includes chiefly the immobilizing potency (prevention of movement to skin incision in 50% of patients) of the anesthetic agent [6].

The dose of the hypnotic agent used to maintain the patient unconscious is detected by bispectral index (BIS) which is EEG-derived parameter. Many studies have shown that BIS has a great correlation with the brain metabolism and with hypnotic and sedative effects of various anesthetic agents as isoflurane, sevoflurane, midazolam and propofol [7,8].

The aim of this study was to evaluate the influence of either dexmedetomidine or remifentanil continuous infusion on expiratory fraction sevoflurane concentration (EF sevo) during general anesthesia, monitored by bispectral index (BIS).

After institutional review board approval and written informed consent, 80 ASA I-II patients their ages were between 40 and 50 years old and their weight were between 80 and 90 Kg scheduled for elective Videolaparoscopic cholecystectomy were included in a prospective, randomized, double-blind study and equally divided into two groups, Dexmedetomidine (D group) and Remifentanil (R group). Patients were excluded if they had severe cardiac disease, chronic obstructive lung disease, renal and hepatic insufficiency, endocrine, metabolic or central nervous system disorders, a-2-agonist or antagonist therapy taken, and active upper respiratory infection, those receiving medications known to affect MAC, or having a history of alcohol or drug abuse; and women who were lactating or pregnant. One of the anesthetists participating into the study randomized patients into one of the two study groups, using a computer- generated random number table. Study drugs (dexmedetomidine and remifentanil) were prepared by a nurse without any marks on the syringes. The same nurse who knew the study protocol adjusted the perfused dose and the perfuser's syringe and screen were covered to enable double blindness throughout the operation, and no change of the dose was allowed. The anesthetist blinded to the drug continued with the anesthesia process and recorded the study parameters.

Anesthetic depth was controlled by varying sevoflurane concentration to maintain BIS between 40 and 60. Muscle relaxation was achieved by rocuronium bromide 0.3 mgkg for maintenance of neuromuscular blockade but no intraoperative narcotics were used in both groups. During the perioperative period, both groups received i.v lactated ringer solution at 4 mL/kg.

The parameters evaluated (BIS, SBP, DBP, MAP, HR, and EF sevo) were expressed as mean and standard deviation in moments at 15 min before induction, during induction of anesthesia, 15 min later, during pneumperitonium, after release of insufflation and 15 min after release of insufflation. Twenty min before the end of surgery, all patients received, dexamethasone 8 mg, ondansetron 4 mg for the prevention of postoperative nausea and vomiting (PONV). Infusion drugs were turned off 15 min before the completion of surgery and patients were ventilated with 100% oxygen at 5 L/min. Following a spontaneous recovery, a combination of atropine 0.02 mg/kg and neostigmine 0.05 mg/kg was administered i.v. to reverse the neuromuscular block. The endotracheal tube was removed when the patient was fully awake. Patients were kept in the post-anesthesia care unit for 2 h.

Sedation was assessed using Ramsay Sedation Scale (RSS) by a blinded nurse, at 5, 15 and 30 min following tracheal extubation. Pain were assessed using a Visual Analog Scale (VAS) from 0 to 10, where 0 no pain and 10 the worst imaginable pain. The predetermined analgesia level was set as a VAS, 4 and rescue i.v. bolus doses of fentanyl (25 mg) were administered if the initial regimen failed to achieve or maintain this goal or if the patient asked for additional analgesics. The presence of PONV and the need for additional analgesics or antiemetics were recorded.

Statistical analysis of the collected data

a) Descriptive statistics: e.g. was expressed in: Number (No), percentage (%) mean (x¯) and standard deviation (SD).

Logistic regression was not done as prediction was not an aim of this work , however, the 2 groups were matched at the beginning of the study for gender, age and ASA (Table 1). 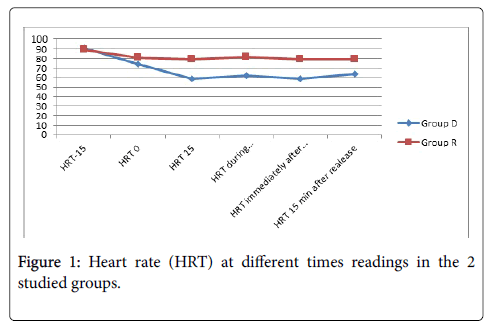 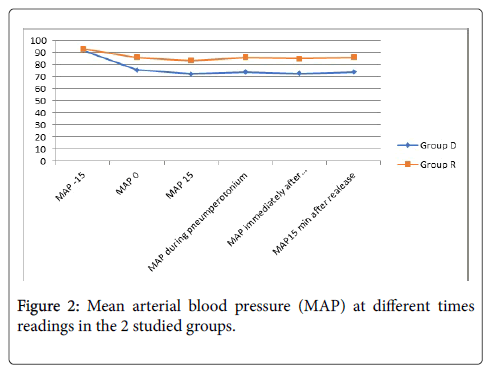 Table 4: Mean sedation score at different times in both groups.

The need of analgesia was significantly higher in group R than group D, however nausea and vomiting at 1 and 2 h were not statistically significantly different (Table 5).

In this study, we compared dexmedetomidine and remifentanyl in hemodynamic stability, the dose of inhalational anesthetics, Recovery parameters and post-operative analgesic requirements in patients undergoing laparoscopic cholecystectomy. This study demonstrates that both drugs blunted the smpathoadrenal responces during surgery, however dexmedetomidine had superior postoperative pain control efficacy and reduced the analgesic requirement and PONV incidence compared to remifentanil. Dexmedetomidine is an ideal sedative as it is a highly selective alpha-2-agonist, with a shorter duration of action than clonidine, [10] it produces a state of hypnosis similar to normal sleep, it doesn't depress the respiration. [11] It has a good analgesic effect by suppression of the nociceptive neurotransmission and inhibition of pain signals propagation. Its sympatholytic effect causes reduction of blood pressure and heart rate; that help in attenuation of the stress response of surgery [12]. It also attenuates the sympathoadrenal effects of tracheal intubation [12]. The ultra-short acting mu opioids receptor agonist, remifentanil [5] is a potent opioid and has predictable controllability owing to its short half-life and rapid elimination; thus make it has an ultrashort duration of analgesia [13,14].

Some studies [15-17] have shown the role of dexmedetomidine both loading and maintenance dose in reducing the dose of inhalational anesthetics and other studies [18,19] have shown the role of remifentanil in reducing the dose of inhalational anesthetics. In our study, BIS monitoring was allowed for maintaining anesthetic depth within a standard variation to avoid unnecessary deep anesthesia or awareness, we noticed that the sevoflurane requirements were decreased in both groups as the intraoperative BIS-guided sevoflurane alteration led to decrease in the fraction of exspired concentration of sevoflurane (EF sevo). Thus, the EF sevo became significantly lower in group D than in group R 15 min after induction, during pneumperitonium, after release of insufflation and before the end of surgery.

In our study the pain stimuli included a small skin incision and the distension of the peritoneum by CO2 pneumoperitoneum expected to induce a violent sympathetic adrenergic response but both dexmedetomidine and remifentanil are effective to blunt hemodynamic responses all over the surgery.

During the maintenance of anesthesia in group D, we observed significant decrease in HR and MABP values, this is may be due to the combined effect of vasodilatation and myocardial depression with volatile agents. statistically significant hypotension and bradycardia was reported by Patel et al. [23] in patients received dexmedetomidine throughout the intraoperative period with partial blunting of response to intubation and reduction of sevoflurane consumption. While group R showed no significant changes all over the surgery in the hemodynamics. These desirable effects of remifentanil on hemodynamic stability has been shown in previous studies using different doses of remifentanil [24-27].

We conclude that any of the two anesthetic techniques are acceptable for in laparoscopic cholecystectomy, both groups are effective in reducing sevoflurane requirement and blunt hemodynamic response during pneumoperitoneum with more significant decrease in EF sevo with dexmedetomidine. Remifentanil provides earlier recovery but with less postoperative analgesia and more incidence of PONV than dexmedetomidine.

Copyright: © 2017 Mogahed MM et al. This is an open-access article distributed under the terms of the Creative Commons Attribution License, which permits unrestricted use, distribution, and reproduction in any medium, provided the original author and source are credited.
Top
betsoobetasus girisdumanbetkralbet supertotobet girisbetmatik giris adresimariobetbetturkey giris bahiscom girisasyabahis girisasyabahis giris