The Effects of a Self-Administered, Two-Session, Cognitive-Behavioral Intervention for Insomnia: A Pilot Study

The Effects of a Self-Administered, Two-Session, Cognitive-Behavioral Intervention for Insomnia: A Pilot Study

Background: It is estimated that 1-in-3 (84M) adults in the US suffer from one or more symptoms of insomnia. This has a damaging effect on almost every area of life. Pharmacologic treatment carries dangers of addiction and side effects. Behavioral treatment is expensive and there are not enough therapists who offer such treatment. To meet this need, the present study explored the effectiveness of a two-session, self-administered cognitive-behavioral intervention.

Conclusions: The intervention produced significant change and large effects within a short time frame. Results suggest the Sleep Easily method may be ideal as a "first step" in a stepped care approach to the management of insomnia. Future studies should assess this method within the context of a larger scale 1) controlled study and/or 2) dismantling study where the component parts of this method are assessed for their unique contribution to treatment outcome.

Despite the evidence of the effectiveness of Cognitive-Behavioral Treatment for Insomnia (CBT- I) [1-21], most patients will not receive this form of treatment.

This is likely true for a variety of reasons including the ease and acceptability of pharmacotherapy and the lack of public awareness about CBT-I.

Additional considerations include the time commitment and cost involved, and the stigma of psychotherapy. Even if these factors were fully addressed, there would remain at least one profound barrier to treatment access: there are very few therapists who have been trained in, and provide, CBT-I.

Given these daunting considerations, it has been suggested that a stepped-care approach is required [22,23]; the first step of which might be a brief self-administered intervention.

The purpose of the present study was to explore the feasibility and effectiveness of a two-session, two-week, self-administered cognitive behavioral intervention referred to as “Sleep Easily” (hereinafter referred to as SE).

This study was designed as a within subject repeated measures design used in conjunction with the two session intervention that was self-administered over the course of two weeks.

The target sample for the study was people who reported difficulty falling or staying asleep, drawn from the following groups: Police personnel, firefighters, commercial airline pilots, and veterans, patients of physicians and members of the general public. No additional inclusionary or exclusionary criteria were applied. In order to acquire this sample, subjects were recruited from United Airlines, the Denver Police Department, the Boulder Fire Department, groups supporting veterans who have Post Traumatic Stress Disorder (PTSD), patients of physicians from the American College of Lifestyle Medicine (ACLM), and the general public.

1. Detailed information about the study was sent to the United Airlines Quality Control Manager, Denver Police Department Manager of Wellness Unit, Boulder Fire Department Fire Chief, the Director of American College of Lifestyle Medicine and the Director of Veterans Helping Veterans Now. These managers were asked to review the proposal and, if they approved, would they be willing to disseminate the information to staff and employees in their organizations.

2. The above directors and managers spoke with the Corresponding Author by phone or in person.

3. All of the above directors and managers approved of the study (the Denver Police Department manager submitted the study proposal to top chain of command and received approval) and circulated a request for participation email that disclosed the intent of the study, the study requirements, and stated that participation was purely voluntary and that all acquired information would be kept confidential.

To accurately reflect the population, no one was excluded from the study. Subjects were not paid for participating in the study.

Because the insomnia intervention is self-administered, there was no face-to-face or phone call contact with the participants. All interactions were through email or through the survey website.

Prospective study participants learned of the study through email received from the above-listed directors and managers. That announcement contained instructions that people interested in participating in the study should email their request to one of the independent investigators who emailed the participant a link to the online pre-treatment questionnaire conducted via Survey Monkey. Subjects requesting to participate were provided contact information for one of the independent investigators.

Those who completed the survey were mailed a package containing a welcome to the study cover letter and study materials.

The booklet also provided instructions for 1) Sleep hygiene (habits and practices that are conducive to sleeping well on a regular basis) 2) Stimulus control (steps designed to associate the bed with sleeping and limit its association with stimulating behavior, i.e., go to bed only when tired, limit activities in bed to sleep and sex) and 3) Information to help people restructure dysfunctional thought patterns regarding sleep.

Sleep hygiene, stimulus control and cognitive restructuring were implemented through the participant reading and implementing the recommendations. The sleep CDs verbally guided the participant through the steps of the basic and advanced versions of the SE method. Earplugs were used to amplify the internal sound of sleep breathing, making it easier to hear. The summary cards enabled participants to use the method without the recording.

The self-administered intervention was structured to include two informational/training sessions and nightly use of stimulus control and the SE intervention. The SE component of the intervention was comprised of a sequence of steps that promotes an enhanced awareness of four body sensations (tongue, throat, heart and abdomen) and the breathing sound and sensation that seem to naturally occur during the transition from wake to sleep.

Awareness of these body sensations, in combination, is intended to create a subjective experience of safety that helps calm mind, emotions, and body and this is thought to help to transition the individual into sleep. The ear plugs were provided to help the individual hear the sound of the sleep breathing pattern.

The intervention was delivered over two informational/training session CDs that each involved approximately 45 minutes to review. The booklet of information about sleep hygiene, stimulus control and cognitive restructuring could be read in about one hour. The nightly use of the SE method-with or without the sleep CDs–was structured to take 20-30 minutes.

Ten days after participants received materials, they were emailed a reminder to fill out online post-treatment questionnaire #1. This first post treatment questionnaire was brief. It included a question asking if their sleep had improved at all and if so, when did they first notice that improvement (followed by multiple choice answers of 1st night, 2nd, etc.).

Many people using this sleep method (prior to this study) reported their sleep began to improve within the first few nights of use. Therefore, we sent this first post-treatment questionnaire early to capture that information while still fresh in memory. This sleep method does not ask people to use sleep diaries because over more than 20 years of working with insomnia patients, the developer of the method (and sponsor of the study) received feedback from many patients that sleep diaries made them more hypervigilant about their sleep, increasing their sleep difficulty.

Seven days after the first email reminder, any participants who did not fill out online post-treatment questionnaire #1, were sent a second reminder.

Three weeks after participants received their materials, they were emailed a reminder to fill out online post-treatment questionnaire #2. This time period was chosen because the method required two weeks to use and three weeks was deemed sufficient time to incorporate any delay in beginning to use the method.

Seven days after the reminder to fill out online post-treatment questionnaire #2, any participants who had not done so was sent a second reminder.

This study was undertaken as contract between the developer of the SE method (and sponsor of the study) and three independent investigators who collected, analyzed, and summarized the data. No one associated with Sleep easily, Inc. interacted with the subjects or had access to the data acquisition or analysis.

All data were collected on-line via a web based survey that was comprised of several questionnaires including the ISI. Study subjects were assessed twice: once when joining the study and two weeks later. The analysis was conducted in two phases. The first phase of the analyses was descriptive.

The sample was characterized with regard to demographic variables. Categorical variables were summarized by frequencies, while continuous variables were summarized by the calculation of means, medians, standard deviations and ranges. The second phase of the analysis consisted of the analysis of continuous (e.g., ISI total score and “Factor” Scores) and categorical outcomes (e.g., response and remitter rates) by way of paired t-tests for pre-post means and chi-square/ contingency statistics for percent and rate measures.

The primary outcomes were assessed with the Insomnia Severity Index (ISI) (used with permission) [2]. The ISI has been validated in comparison with sleep diary and polysomnographic measurement and has been shown to be sensitive in measuring treatment response in patients. In the current study, the ISI was assessed in terms three scores: total score, and two factor scores.

Treatment outcome was assessed via pre and post-treatment replies to the ISI. Sleep diaries were not used because within the SE treatment protocol, it has been found that when people.

Secondary outcomes were evaluated post hoc with single item questions from a brief end of study survey which included items regarding latency to response, ease of use re: the method, and change in medication use (Table 1). 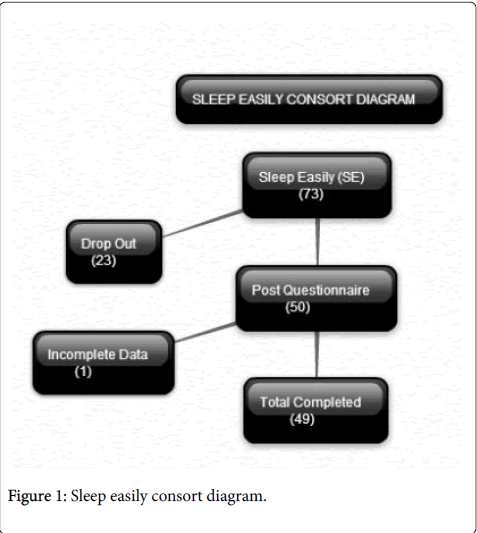 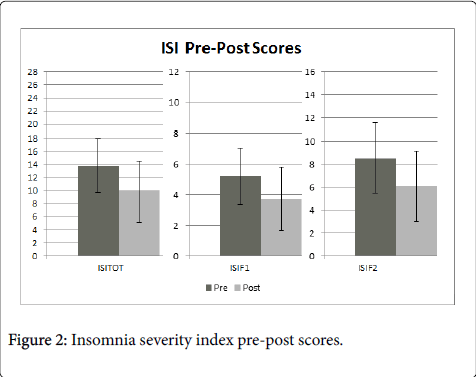 It would be erroneous to assume that failure to complete the study correlated to the subjects’ results of using the method. Some of the reasons for not completing the study may have been logistical, such as not enough time, failure of the equipment needed to play the sleep audio recordings, or a work or life crisis that overpowered their willingness to continue with an optional project such as this study.

The rate of attrition observed in the present study is higher than clinical trials with CBT-I (10-20%) [24] and is on par with both selfhelp programs [25] and what occurs in clinical practice [16].

The present study provides preliminary data that the two-session, two-week, self-administered SE intervention produces significant outcomes for people with insomnia. While the average outcome is less than might be expected with 8-week in person CBT-I (e.g., responder rates from 70-80% and remission rates at approximately 40% [26]), this may be due to the modest level of initial severity of the study sample, the brevity and simplicity of the intervention, and/or the effects of ongoing occupational stress. This said, the intervention produced significant change (and large effects) within a short time frame and did so in the context of a brief self- administered intervention.

The only risk for the SE component of the intervention is related to those that may have an adverse or paradoxical reaction to the induction of relaxation. Generally, this occurs more frequently in individuals with schizophrenia, PTSD, and/or survivors of sexual assault. Whether these, and other Axis 1 or medical disorders, constitute true contraindications remains to be determined.

Results from this study suggest that the SE method may indeed be ideal as a “first step” in a stepped care approach to the management of chronic insomnia. Future studies should be conducted in larger samples under controlled conditions and/or focus on the relative contributions of Stimulus Control, Sleep Hygiene, and the specific components of the SE method, to treatment outcome and the durability of the treatment.

Copyright: © 2016 Maier D, et al. This is an open-access article distributed under the terms of the Creative Commons Attribution License, which permits unrestricted use, distribution, and reproduction in any medium, provided the original author and source are credited.