The Box Ankle Replacement: Results at a Minimum Follow-up of 5 Years The Box Ankle Replacement: Results at a Minimum Follow-up of 5 Years

A new design of 3-part ankle replacement was developed to achieve compatibility with the natural ligaments by allowing certain fibres to remain isometric during passive motion. From July 2003 to April 2008 we have implanted 70 ankle prostheses. The mean age at surgery was 61.5 years (range 29.7-82.5). Mean follow-u is 6,4 years (5-9 years). Radiographs showed good alignment, no loosening and little signs of progressive radiolucency. The preoperative AOFAS score was 38.4 and at last follow-up increased to77,9. Function and Range-of-motion scored better than previous total ankles. Two revisions necessitated component removal, neither for implant failure. These results demonstrate that non-anatomically shaped talar and tibial components, with a fully conforming interposed meniscal bearing, can provide satisfactory clinical results in the short term.

In the early to mid 1970’s, total ankle arthroplasty (TAA) was introduced [1,2] as a possible alternative to arthrodesis for the treatment of severe erosions of the articular surfaces of the human ankle joint but long-term results of the pioneering designs have been disappointing [3-5]. More modern designs have produced better results, contributing to a renewed interest in TAA over the past decade [6-17], but TAA is still not as successful as total hip and total knee arthroplasty. Recent publications from the Swedish [18], Norwegian [19] and New Zealand [20] Registries have revealed a steady annual revision rate of 2 to 3% while a similar population study from California showed a 4.6% annual revision rate [21]. Most recent review papers [22-26], while encouraging arthroplasty against arthrodesis, point out that the clinical results of current designs are not fully satisfactory. Poor understanding of the functions of the structures guiding ankle motion in the natural joint, i.e. ligaments as well as articular surfaces, and poor restoration of these functions in the prosthetic joint may be responsible for the limited range of post-operative joint mobility [9].

A new design of TAA was developed recently in which the shapes of the articular surfaces in the sagittal plane were chosen to allow a natural interaction with the retained ankle ligaments [27-29]. A feature of the surface/ligament interaction which the new design attempts to reproduce is to allow fibres within the calcaneofibular (CaFi) and tibiocalcaneal (TiCa, i.e. the central superficial fibres of the deltoid ligament complex) ligaments to remain isometric over the range of passive motion while all other ligament fibres are tight only at the limits of plantar or dorsi flexion [30-34].

Previous designs of TAA focused exclusively on the geometry of the prosthetic components in relation to the morphological features of the intact articular surface of the talus [1,12,35,36]. Current three-part prostheses [6,14,15,17,37-40] use a more or less natural-like convex surface for the talar component and a non-anatomical flat surface for the tibial component. This combination of anatomical and non-anatomical surfaces cannot be compatible with the retained ligaments [27,28]. In the BOX prosthesis the tibial arch is deduced from the imposed talar arch thus resulting in isometry of the ligaments. This paper provides the results of Box ankle replacement (Figure 1) (Box Ankle, Finsbury Orthopaedics Limited, Leatheread, UK) performed by a single surgeon at a minimum follow-up of 5 years in order to compare the achieved results with highest methodological studies available in the literature (Figure 2a and 2b). Figure 1: The three components of the Box ankle prosthesis, in the neutral position, i.e. aligned in all three anatomical planes: tibial component (above), meniscal component (in between), talar component (below). 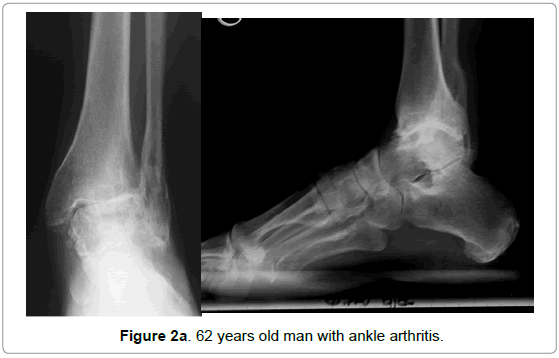 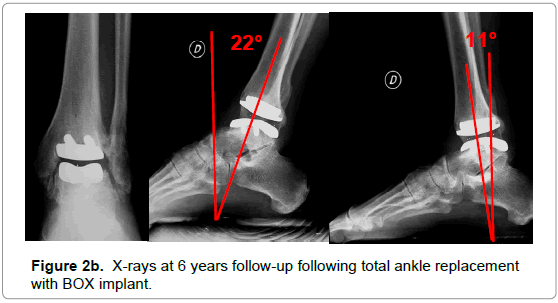 Figure 3a: 39 years old female with less than 20° in other footjoints in club foot sequelae 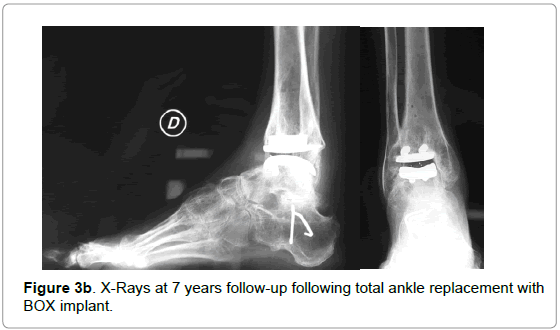 During the implantation other procedures were performed in order to achieve a correct foot stance, including distal first metatarsal osteotomy [42], reduction of previous tibiofibular mortise enlargement with a syndesmotic screw, lateral ligament reconstruction, calcaneal osteotomy, but mainly percutaneous Achilles tendon lengthening in about 70% of the cases to achieve satisfactory dorsiflexion following component implantation. Two intra-operative complications occurred, including one lateral and one medial malleolar fractures treated with K-wires.

The mean AOFAS scores achieved at pre-op and at last follow-up were respectively 38,4 and 77,9. Using paired sample t-tests, changes at last follow-up with respect to the pre-op were found to be significant (p<0.001). These AOFAS scores where post-traumatic osteoarthritic and rheumatoid patients were considered have not significant differences. Clinical range of motion of the ankle pre op was 2,3° of dorsiflexion and 13,4° of plantarflexion. At last follow-up range of motion increased to 6,6° in dorsiflexion and 19,9° in plantarflexion.

Follow-up radiographs showed no variation in the positions of the components. Radiolucencies greater than 1 mm were observed in 12 patients, though not progressive.

Radiographs at maximal dorsiflexion and maximal plantar flexion and fluoroscanning confirmed that the meniscal bearing component moves in the direction predicted by the computer-based models [27,28].

Complications post-operatively included three problems with wound healing resolved with no need of re-operation. Three patients complained of severe pain on the medial side, proved to be associated with arthrofibrosis and osteophytes at the medial tibio-talar articulation and treated successfully by reoperations for tissue and bone removal (in one of these three operations calcaneal osteotomy was also performed). One isolated calcaneal osteotomy and one subtalar fusion were performed.

Component removal was necessary in two cases. A medial impingement due to ankle varus deformity at 36 months was treated with successful arthrodesis with a retrograde locking nail. The other case of component removal was due to an infected periprostetic fracture following an high velocity trauma at 2 years follow-up.

The disappointing results reported in the literature about the use of ankle prostheses have prompted many surgeons to abandon this type of implant in favor of ankle fusion. These results refer to series of patients with a rather wide indication and the use of prosthetic designs that do not completely restore the joint physiology and biomechanics of the ankle and lower limb [7,8]. A review of the literature and our experience suggest that indications for this type of operation are limited to patients with arthritis over 50 years of age, or under 50 if functional requirements are low, patients with rheumatoid arthritis with reduced functional compensation due to the involvement of other joints, patients with arthritis with less than 20° flexion-extension in other foot joints, and patients that refuse arthrodesis. These main indications suggest that for the success of total ankle arthroplasty the patient’s level of activity must be moderate and therefore the mechanical stress on the prosthesis must also be low. For that reason it is important to assess and correct any deformities in the hip or knee beforehand, as they may be a cause of overloading. Other contraindications to this type of surgery are varus or valgus deviation of the hindfoot and instability due to capsulo-ligamentous imbalance. These contraindications can be overcome by treatment before or during the total ankle arthroplasty procedure. Absolute contraindications are marked osteoporosis, especially in the talus, because it may cause subsidence in the talar component, severe neurological disorders, severe vascular disorders, and infective processes in progress.

The main objectives of total ankle arthroplasty are to resolve the pain, achieve joint range of movement in terms of joint excursion and kinetics and kinematics, and restore the original stability of the joint. Besides these main objectives, there is the desire to have a prosthesis that will survive as long as those of the hip and knee. The clinical results of this new device have demonstrated safety and efficacy. The present survival rate at 6,4 years (97.1%) compares very well with multi-centre 5-year rates published by the Swedish [18] (531 cases, survival 78%), Norwegian [19] (257, 89%) and New Zealand [20] (202, 86%) registries. In addition, type and number of complications, range of motion, and X-ray analyses are encouraging. The only observation consistent with the previous literature is the degree of remaining pain after TAA, which at the ankle can be accounted for by many factors and can be caused at several different joint levels.

The extensive meta-analysis by Stengel et al. [43] provides a convenient basis for comparison of the clinical results. The overall AOFAS score improvement in the present trial patient population is similar to that of the meta-analysis. However, the most encouraging figure is the absence of device-related revisions at short term, which compares very well with the typical long list of failures [44]. It has been reported [37] that revisions can occur at 2, 5, 8, 9, 10, 11, 12, and 21 months even in a series of 122 patients with 1 to 3 year follow-up. A recent study [45] reports a 8.2% revision rate in a population of 49 TAA at a mean followup time of 28 months (12 to 67). A most recent study [46] reports 8% revisions in a population of 200 TAA at a mean followup time of 54 (36 to 85) months. Range of motion and AOFAS here reported compare well also with Haddad et al. [47]. Finally the very little signs of progressive radiolucency reinforce further the claim of a robust overall implant.

We are aware that a recent literature stated that AOFAS score may be inappropriate and this represents a limitation of our study. On the other hand most of the International case series form national registry used this score imposing us to adopt it in the evaluation of our patients [48].

In conclusion, a new TAA was designed to restore physiological function at the replaced ankle joint. Surgical results are encouraging, demonstrating intra-operatively the suitability of the prosthetic components, the operative technique and the surgical instruments. While reproducing physiologic ankle mobility, the new design maintains complete congruence of the articulating surfaces over the entire motion arc, with the prospect of minimizing wear. Clinical outcomes at 6,4 years are encouraging but a longer follow-up is required.

Copyright: © 2013 Giannini S et al. This is an open-access article distributed under the terms of the Creative Commons Attribution License, which permits unrestricted use, distribution, and reproduction in any medium, provided the original author and source are credited.