We describe a case report of terminal ileitis and mesenteric adenitis by IgE-mediated allergy to wheat after detecting the culprit proteins by basophil activation test and SDS-PAGE immunoblotting. Gastrointestinal symptoms and terminal ileitis was resolved by avoiding the causative agent. We emphasize the need for a multidisciplinary clinical approach in order to achieve a definitive diagnosis and optimal treatment.

Inflammation in terminal ileum (ITI) is a manifestation of inflammatory bowel disease but differential diagnosis includes ruling out other clinical entities such as reactions to foods [1,2].

Food-allergic disorders are attributable to adverse immune response to dietary proteins and clinical features include diarrhea, vomiting, abdominal pain, colic, and malabsorption as well as others manifestations including headache, insomnia, and failure to thrive [2,3].

Wheat (Triticum aestivum) is one of the most commonly consumed types of grain in Europe and America causing various gastrointestinal disorders [4] and being one of the most common food allergens in children with predominant gastrological symptoms and a history of atopy [5,6]. The aim of this paper is to report a long evolution case of ITI with nutritional impairment and clinical improvement following wheat elimination diet, suggesting the implication of wheat as causal agent such as oriented in literature [5,7], and in which the finding of gastrointestinal food allergy is highlighted.

A 14-year-old caucasian male was referred to our university hospital because of terminal ileitis and mesenteric adenitis during the last five years, requiring multiple hospitalizations for severe abdominal pain, after excluding diagnosis of celiac and Crohn's disease.

The patient had a history of allergic rhino-conjunctivitis and bronchial asthma from house dust mites and pollen. He reported a marked decrease in appetite with poor dietary intake since early age. Furthermore, he had episodes of colic abdominal pain, waking at night without nausea or vomiting, sometimes associated with headache and increased depositional rate. At admission, underweight was observed (43 kg, 1.64 m, BMI 15.9 kg/m2).

After eliminating wheat from the diet for 6 months he showed improvement of symptoms with subsequent relapse in relation to dietary transgressions even when he was performing treatment with Mesalazine, Clebopride and Simethicone. In the next 6 months, after allergy study, the patient underwent a strict wheat avoidance diet, thus remaining asymptomatic, without requiring medication, no need for assistance in emergency room or hospital admission.

The allergy study included skin prick test (SPT) with a food standard battery (egg, milk, fish, seafood, nuts, meat and vegetables), cereals and flour (wheat, rye, barley, oats, rice and corn) and environmental allergens (house dust mites, pollens, epithelia and fungi). SPT were performed on the volar side of the forearm at a distance of not less than 5 cm from the wrist and 3 cm from the elbow. Control solutions were applied: first, negative control (0.9% NaCl solution), followed by positive control (histamine solution 1/1,000). A positive reaction after allergen application occurred in the form of a wheal of 3 mm or more in diameter and erythema. To determine the size of the wheals, their diameters were measured (using a transparent ruler): the longest diameter and its perpendicular diameter. The obtained value was compared with the diameter of the histamine wheal.

BAT was assessed by analyzing CD-63 expression by basophils after in vitro allergen-specific stimulation. Briefly, 100 μl of whole blood were incubated for 20 minutes at 37ºC, with 20 μl of basophile stimulation buffer containing IL-3 (BD Biosciences Europe, Belgium) at 2 ng/mL) alone or with the addition of two different concentrations of wheat flour (0.18, and 0.04 mg/ml) were evaluated. Monoclonal anti-IgE antibody (Sigma-Aldrich, USA) at 1 μg/mL was used as positive control. Degranulation was stopped by chilling the samples on ice for 5 minutes. Thereafter a combination of anti-CD63-FITC, anti- CD123-PE and anti-HLA-DR-PerCP (BD FastImmune, BD Biosciences) was added and incubated for 20 minutes on ice. Red cells were then lysed by adding 2 ml of FACS Lysing Solution (BD Bioscience) to each sample for 15 minutes. After incubation, cells were washed with PBS and subsequently fixed with 0.5 paraformaldehyde. Samples were acquired on a BD FACSTM flow cytometer with a 488- nm laser, and at least 500 CD123+HLA-DRdim basophils per sample were analyzed. Activated basophils were identified additionally as CD63+.

Positive results were obtained in SPT with dog and cat epithelia, grass pollen and Dermatophagoides pteronyssinus, whereas all food allergens tested were negative. Total IgE was 2.28 kUA/l. sIgE results were positive to Lolium perenne pollen, Dermatophagoides pteronyssinus, cat and dog epithelium and negative with wheat, barley and Tri a 19 (Table 1). Tri a 14 (LTP), Tri a 19 (ω5-gliadin), nTria aATI (trypsin inhibitor) and buckwheat (2S albumin) analyzed with the ISAC microarray system were negative. BAT was positive with wheat flour extract (Figure 1). Study of lymphocyte populations was normal. SDS-PAGE immunoblotting performed with extracts from wheat flour and wheat seed showed several IgE-binding bands, with molecular mass around 57.4 to 60 kDa (they could be β-amylase or β-glucosidase, respectively), about 43 kDa (could be a serpin), around 34 to 35 kDa (could be an endochitinase) and about 16.5 kDa (could be a α-amylase inhibitor 0.28) as shown in Figure 2 [8]. 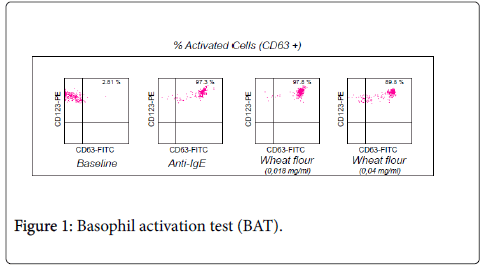 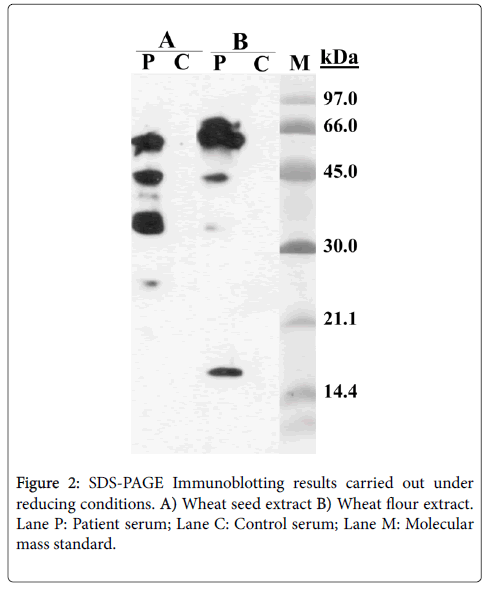 Several wheat allergens have been described and some of them associated with different clinical features presented by the patient [9]. Thus, α-amylase/trypsin inhibitor, serine proteinase, thaumatin-like proteins, prolamins, and peroxidases have been involved with baker’s asthma, urticaria/angioedema and cutaneous symptoms associated with atopic dermatitis; ω-5-gliadin (Tri a 19) has been related with exercise-induced anaphylaxis, and nonspecific lipid transfer protein (nsLTP or Tri a 14) with allergy symptoms upon ingestion of wheat, among others [7,8].

However, there is still insufficient knowledge about the wheat allergens and some extracts used for SPT or sIgE measurements against wheat could not contain all the wheat allergens. Many of these proteins require performing complex in vitro techniques that allow its detection [10].

It is reported that patients with irritable bowel syndrome had gastrointestinal symptoms after wheat ingestion and showed IgE binding proteins demonstrated by immunoblotting [10,11]. Therefore, several studies show that commercial cereal extracts for SPT and ImmunoCAP® do not contain all allergens involved both for study of gastrointestinal and skin food allergy. Extensive analysis of allergenic molecules is necessary for allergy diagnosis and treatment showing that in recent years, BAT as a useful diagnostic technique to avoid dietary exposures and to increase the diagnostic value [8,12].

It is interesting to emphasize the cross reaction among wheat and pollen allergens [13] that considering the pathological history of the patient could have guided the clinical case towards coexisting with food allergies.

We consider this case of interest because our patient is a young man with IgE-mediated allergy to wheat manifested by gastrointestinal symptoms and finding of terminal ileitis which was resolved by avoiding the causative agent, in this case, wheat. We were able to detect the culprit proteins by BAT and SDS-PAGE immunoblotting.

Copyright: © 2017 Girao Popolizio I, et al. This is an open-access article distributed under the terms of the Creative Commons Attribution License, which permits unrestricted use, distribution, and reproduction in any medium, provided the original author and source are credited.
Top