Primary Squamous Cell Carcinoma (SCC) of the kidney is exceptionally infrequent and associated with chronic inflammation such as urolithiasis and chronic infection. Because of its rarity with non-specific clinical and radiological findings, it is almost always never suspected preoperatively. To our current understanding of this disease has been arrived from case reports or limited case series, and there are no standard therapeutic guidelines. The findings of this unusual disease are described in this report.

A 60-year-old gentleman who works as a rural farmer presented with colicky right sided abdominal pain for almost 2 years and always took over-the-counter analgesia to relieve his symptoms. He finally presented to hospital after he developed 2 weeks history severe right sided abdominal pain. He also complained of a mass over the right flank. The pain and mass seemed to subside after discharging pus which had been going on for the last eight months. He also complained of intermittent fever with chills and rigor.

On admission, he was afebrile and not septic. Per abdomen, there was a huge palpable and ballot able right renal mass which was tender on palpation. We also noticed there was a sinus opening discharging pus at the right lumbar cutaneous area posteriorly. The rest of the examination was unremarkable. Haematological investigations showed a leucocytosis with White Cell Count (WCC) of 15.3 × 10/L and Hemoglobin (Hb) of 10.2 g/dL. He had normal blood urea, electrolytes and creatinine. His estimated Glomerular Filtration Rate (eGFR) was 98 mL/min/1.73 m2. His C-Reactive Protein (CRP) was elevated at 150 mg/L. Ultrasound of the kidney showed gross right hydronephrosis filled with debris, secondary to right ureteropelvic junction stone. We proceed with contrast enhanced CT scan abdomen which confirmed the diagnosis of right pyonephrosis with obstruction of right renal pelvis by pelvic stone. The cortex of right kidney was thin. We also noticed a nephrocutanous fistula tract at right lumbar region.

Ultrasound of the kidney showed gross right hydronephrosis filled with debris, secondary to right ureteropelvic junction stone. We proceed with contrast enhanced CT scan abdomen which confirmed the diagnosis of right pyonephrosis with obstruction of right renal pelvis by pelvic stone. The cortex of right kidney was thin. We also noticed a nephrocutanous fistula tract at right lumbar region.

Incision and drainage were performed over the cutaneous opening and he was started on IV Sulperazone for 4 weeks followed by 2 weeks of oral cefuroxime. Right nephrostomy was inserted and right ante grade pyelogram performed which confirmed an obstructed system due to impacted stone. Attempts to stent the system via ante grade and retrograde manner were made but failed. DTPA showed non-functioning right kidney with complete obstruction. We offered him open right nephrectomy as the definitive treatment.

However, during the course of his treatment he defaulted several follow up and open right retroperitoneal nephrectomy was only performed 2 years later. There were dense adhesion between right kidney and liver edge. The kidney size was 12 cm x 7 cm and weighed 400 grams. Upon opening the specimen, the pelviccalyceal system was dilated and distorted by the impacted pelvic stone. Grossly no tumour was seen. He made an unremarkable recovery and was discharged on day 5 postoperatively (Figures 1 and 2). 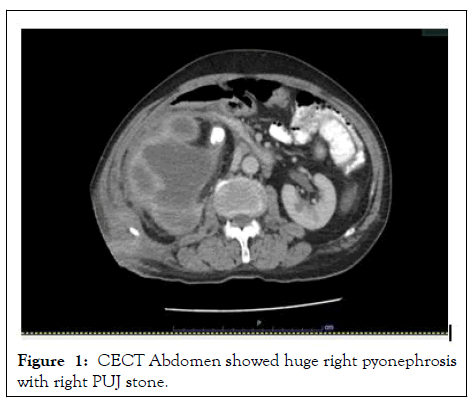 Histopathology examination showed squamous metaplasia of the lining of epithelium with full thickness dysplasia at renal pelvis. No lymph vascular invasion seen. The surrounding parenchymal tissues showed marked fibrosis with lymphocytic cell infiltration with some areas of foamy macrophages. The glomeruli were scleroses and tubular thyrodisation seen. This confirmed the diagnosis of SCC of right renal pelvis with background of chronic inflammation and non-functioning kidney. TNM staging at the time was T1N0M0 (Figure 3). Due to Covid 19 pandemic patient not turning up for his follow up appointment, we could not convey the diagnosis to him and follow him up accordingly. He presented to us 18 months later with acute intestinal obstruction associated with painful right sided abdominal mass. He was cachexia and weak. Per abdomen examination revealed a huge intra-abdominal mass over right lumbar which was fixed to erector spinal muscles. His blood parameters were grossly normal except his Hb was low at 9.5 g/L with no biochemical evidence of liver or renal derangements. Contrast enhanced CT abdomen showed a huge heterogeneous mass occupying the right renal fossa with infiltration to right erector spine and lumbar vertebrae from level L3 to L5. There was also a closed loop bowel obstruction due to mass effect. The mass was unrespectable and patient was not keen for any DE functioning stoma after family counseling. The patient and family were explained about the diagnosis of recurrent renal pelvic SCC and its prognosis. He passed away 2 months later (Figure 4). Renal pelvis is a unusual site for SCC and only accounts for 6% of upper urinary tract tumours [1]. Renal pelvis SCC have been shown to have a strong connection with renal stone, where females are more commonly affected and majority in their older than 50 years old (Figure 4). Nephrolithiasis and chronic pyelonephritis are the two commonly reported etiologies for renal pelvis SCC. Schistosomiasis infection, vitamin A deficiency, smoking and exogenous and endogenous chemicals have also been advocated as etiologies for the disease [2].

Renal pelvis SCC is associated with chronic infection and renal stones, leading to squamous metaplasia, dysplasia and finally SCC [3-8]. Renal pelvis SCC seems to develop years after inflammation in the urinary tract due to renal stones [9]. There are many publications on bladder stones and SCC [10,11], but SCC-related nephrolithiasis were infrequent [12]. Stasis in hydronephrotic non-functioning kidneys seems to be the theory why the rate of SCC appears to increase in renal pelvic stone rather than bladder stones [13].

In a study by Shah, et al., [14], two cases of untreated, neglected renal stones was reported and suggested that the stones were the cause of SCC. Other case reports have also shown the relation between non-functioning kidneys with stones, and evolution to SCC reported a case of SCC of renal pelvis presenting as a multisystem lesion. Presented a case of SCC related nephrolithiasis and described lower occurrence of SCC in nonfunctioning kidneys without stones. Our report showed the occurrence of SCC in a non-functioning kidney was associated with renal pelvis stones which was similar to the mentioned literatures [15].

Renal SCC is uncommonly diagnosed preoperatively due to its unspecific clinical and radiological findings. Patients may present with non-specific symptoms such as haematuria, lumbar pain, loss of weight, pyerxia or abdominal mass. Renal SCC may also present with paraneoplastic syndromes such as hypercalcaemia, leukocytosis and thrombocystosis. Our patient presented with right flank pain and fever without paraneoplastic syndromes. Another special feature in our case is that he has spontaneous nephrocutaenous fistula which never been reported before. Findings of SCC of renal pelvis from imaging may include a solid mass in the kidney, hydronephrosis, calcifications or regional lymphadenopathy however these findings are non-specific and cannot be distinguished from other chronic renal diseases such as renal tuberculosis and Xanthogranulomatous Pyelonephritis (XGP). An enhancing l esional mass may be a helpful in diagnosis of SCC [16]. In the present case, the preoperative CT scan only showed a gross right hydronephrosis with pyonephrosis. Neither enhancing lesion nor significant lymphadenopathy was present to raise the suspicion of malignancy.

At this point of time, no established guidelines for management of primary renal SCC that is available. Surgery has been the only promising treatment with curative intent. But there are no established methods on how to accurately stage the lymph node status. No survival benefits were seen in those received cisplatinbased chemotherapy with or without radiotherapy. Adjuvant radiotherapy also has not shown to improve survival in these patients [17]. Studies have reported that the average survival time is less than 12 months and most patients die within 2 years after diagnosis.

This report highlights that a diagnosis of malignancy should be considered in a long history of inflammation or infectious pathology with no known risk factors as calculi or diabetes mellitus. The initial diagnosis of SCC of kidney is difficult because imaging techniques usually reveal only calculi and hydronephrosis due to obstruction. Patients with long-standing history of renal stones should be carefully examined with newer imaging modalities like contrast enhanced CT or MRI for early detection of co-existing SCC which would warrant a more aggressive approach to improve the prognosis. Careful history taking may give clue for the presence of risk factors but SCC of renal pelvis may occur in the absence of any of predisposing condition. Therefore, careful and exhaustive assessment of specimen and examination of histopathologically sections are mandatory to avoid any occult malignancy in such type of nonfunctioning kidney. Renal stones should also be managed promptly to prevent this rare but devastating complication.

Copyright: © 2022 Redzuan MZA, et al. This is an open-access article distributed under the terms of the Creative Commons Attribution License, which permits unrestricted use, distribution, and reproduction in any medium, provided the original author and source are credited.