Flood is an annual event in the district of Jalpaiguri. Almost all the administrative blocks of the district are more or less flood prone. Like the administrative blocks almost all the rivers in the district are also flood prone. Due to this every river has certain flood level as well as danger level to observed the flood situation in the area. Following the past observation of flood level crossed by the river the probability of current event can be obtained. In this paper the authors are tried to show the spatial distribution of flood potential in the district with the help of probability analysis of flood event of individual rivers and exposure indicator score of the adjacent area. Here probability explains number of chance of flood in Individual River and exposure indications explain how much the area is exposed to flooding. The mapping is based on spatial flood potential index (SFPI).

Flood in any particular area can be predicted by the flood probability analysis. The probability of flood event has analysed through the nature of flood level cross by the river. The nature of the river can be determined by the intensity of the Flood Level or Danger Level reached by that particular river. Like the probability analysis of the river flood the analysis of the exposure indicators of the adjacent area is equally important for flood event. An Exposure indicator explains how the place is physically exposed to flood hazard event. Exposure indicators include percentage of flood area in a particular place, flood frequency, flood water depth, flood water stagnant period, elevation of the place and velocity of the adjacent river. Both, the probability of flood event and the exposure indicator can express the future flood potential of the area concern. Moreover, in vast flood prone area flood potential analysis helps in proper flood management. Figure 1: Drainage map of the Jalpaiguri District with administrative blocks. Flood in the district is an annual phenomenon. However, its intensities vary from year to year. These intensities vary in term of area affected (in hectare), population affected, cropped area affected, housing affected and infrastructure affected. Almost all the administrative blocks are more or less affected by the flood every year. The main rivers in this district which influenced flood are Teesta, Jaldhaka, Torsa, Kaljani, Raidak, Riti, Titi, Mujnai, Sankosh etc. River Teesta influence Mal, Jalpaiguri Sadar and western part of Maynaguri block; River Jaldhaka influence Nagrakata, eastern part of Maynaguri and western part of Dhupguri block; River Torsa influence some part of Kalchini, Madarihat and Alipurduar I block; Raidak (I and II) influence Kumargram block. River Kaljani influence Alipurduar I block. Madarihat block is actually influenced by Riti, Titi and Mujnai River.

All the rivers have particular observation site established by CWC (Central Water Commission) and I and W (Irrigation and Waterways) Department, Jalpaiguri. I Gauge height have been observed in monsoon period (May to 15th October) from these stations flood forecasting (Table 1).

Table 1: List of Administrative Blocks and the influencing rivers which contribute flooding.

Objective of the Study

Present paper has been high light on the following study.

1. To find out, if flood occurred in this year in the district then what will be the probability of flooding of each river.

2. To find out, how much the administrative blocks are exposed to flood.

3. Moreover, to find out the spatial flood potential in block level of the district.

Data Base and Methodology

NBFCC (North Bengal Flood Control Commission, Jalpaiguri) has provided the data of gauge height of different rivers of different years. From that data flood and non-flood year has been obtained for different rivers. The data are given in Table 2 [1-8].

Table 2: Flood and Non-flood event in different rivers in the district.

Other than these data for the analysis of Exposure Indicator of vulnerability different variable have been used. These variables data are collected from various sources. Those are given in Table 3.

Table 3: The Block level study of Exposure as an indicator of flood vulnerability is based on the following variables.

Other than the probability analysis for exposure indicator Principal Component Analysis has been introduced. Principal Component Analysis is a statistical method - a branch of Factor Analysis - based on large number of variables statistically reduced to smaller number of general components. It also identifies components that account for the overall variability within the variables. The principal components are linear combinations of these variables accounting for the common and unique variability explained by them.

The steps involved in Principal Component Analysis are: i) extraction of initial components, ii) determination of significant component, retained in a model, iii) a Varimax rotation with Kaiser Normalisation applied for the component matrix based on factor loadings to obtain a solution, iv) interpretation of the solution, v) computation of score for each factor and of general score, vi) synthesis of results in Table 3. From the result of Probability Score (Px) and the Exposure Indicator Score (EIS) final Spatial Flood Potential Index (SFPI) has been obtained. With that score the total mapping has been done.

Table 4: Probability distribution of different rivers with their percentage.

Figure 3: Flood probability in different rivers in the Jalpaiguri district. High probability of flood has been found in the Kalchini block followed by Alipurduar II and Alipurduar I. Other than these blocks high flood probability has been observed in Mal and Dhupguri blocks. Rajganj block in this situation has not been taken into consideration because in Rajganj block some ungauged forest rivers (originate from Baikunthapur forest, which is situated in the north of the block) like the Karala, the Fulash-war, and the Suan are mainly responsible for flooding and which is very negligible portion.

An Exposure indicator explains how the block under consideration is physically exposed to flood hazard event. In Exposure indicator PCA analysis the Kaiser-Mayer-Olkin (KMO) sampling adequacy test values are >0.5 and Bartlett’s sphericity tests returned P<0.05. This suggests that the variables are suitable for PCA. The structural matrix loading for exposure indicators of each component (i.e. PC1, PC2…) which Eigen value >1 and together the three component of Exposure Indicator account for 76.09% (Tables 6 and 7).

With PCA application, score in respect of Exposure Indicator PC1, PC2 and PC3 have been obtained (Table 5). PC1 explains velocity of the adjacent river and elevation of the area, PC2 explains number of days when water remains stagnant as well as depth of the flood water and PC3 explains the percentage of flood prone area in the block and percentage of high flood prone mouzas in the block. Total score of PC1, PC2 and PC3 indicates the score of exposure indicator of the particular block. Table 5 refers to the exposure indicators scores and their corresponding ranks.

PC1 Score explains the magnitude of flood event in the district as the product of high river velocity as well as high elevation coupled with high slope. According to the PC1 Score, Madarihat Block stood first (Table 8). Here, two rivers mainly Mujnai and Riti are responsible for flood. The reason is that the average velocity of these two rivers is quite high to the tune of 3.5 m/sec. Moreover, the average elevation of the block is as high as 150 m having a steep difference of slope from 80- 150 m/km to 10-20 m/km. As a result the PC1 score is high here. The second highest PC1 Score has been observed at Kalchini Block followed by Matiali Nagrakata, Mal, and Jalpaiguri Sadar with positive PC1 Score. Negative PC1 Scores are found for the administrative blocks in the order of Rajganj, Alipurduar II Falakata, Dhupguri, Maynaguri, Kumargram and Alipurduar I (Table 5). It may be noted therefore that the negative PC1 values do not suggest occurrence of flood in the above noted administrative blocks for reasons other than high velocity river and high altitude.

PC2 Scores explain the occurrence of flood event as a function of duration of water stagnation in days and depth of stagnated water. According to the PC2 Score, Kumargram stood first. Here, flood water stays on an average for 3 days and the depth of the stagnated water remains at 1 foot (0.3048 m). Other than the Kumar-gram block, the occurrence of flood event (positive PC2 Score) gradually decreases over Alipurduar II, Kalchini, Matiali, Madarihat and Maynaguri block. Negative results of PC2 Score occur at Alipurduar I, Jalpaiguri Sadar, Rajganj, Dhupguri, Falakata, Nagrakata and Mal, the last one having the minimum negative PC2 Score.

PC3 Scores explain the occurrence of flood as the function of the extent of percentage area experiencing flood and frequency of flood event over a period of 15 years from 1998-2012 in the district of Jalpaiguri. Highest positive PC3 Score has been found in Mal block. Here, total number of flood affected mouzas as well as frequency of flood is found to be high. In case of PC3 Score in the district, positive scores are found other than the Mal block in Jalpaiguri Sadar, Maynaguri, Dhupguri, Matiali, Falakata, Madarihat, Alipurduar and Kumargram. It clearly speaks for the large areal extent and high flood frequency in the district. This is why in almost all the blocks PC3 Score is positive in nature. The negative PC3 Scores are found in Kalchini, Alipurduar I, Rajganj and Nagrakata block. In all of these four blocks, maximum portion of land is covered by forest.

Exposure indicator has been derived from the combination of these three PCI Score (PC1+PC2+PC3). According to the total PCI Score of Exposure indicator, first rank goes to Matiali block (Figure 5), followed by Madarihat and Kalchini. In Matiali block PC1, PC2 and PC3 all three scores are positive in nature. In Madarihat also PC1, PC2 and PC3 score are positive in nature but in case of Kalchini block in spite of the negative PC3 Score due to high PC1 and PC2 Score Kalchini block stood third in Exposure Indicator Score. Exposure Indicator Scores are classified into six major ranges (1-6). 1 (one) indicates highest exposure to flood or most unfavourable condition in single flood event. Degree or Intensity of exposure decreases with increasing rank (Table 8).

Spatial flood potential Index (SFPI) has been calculated with PX (Probability of individual block) and EIS (Exposure Indicator Score of individual blocks). SFPI of individual blocks has been identified which is given in Table 9. According to this calculation maximum SFPI has been observed in Kalchini block followed by Madarihat and Matiali block. The remarkable high SFPI are also observed in Alipurduar II and Sadar block. In spite of remarkable high probability in Dhupguri and Nagrakata block due to low score of EIS the SFPI of these block become very low. Again due to high EIS in Matiali and Madarihat block SFPI is high in spite of low Px. With the value of SFPI Spatial Flood Potential Mapping (SFPM) has been done for whole district (Figure 6). 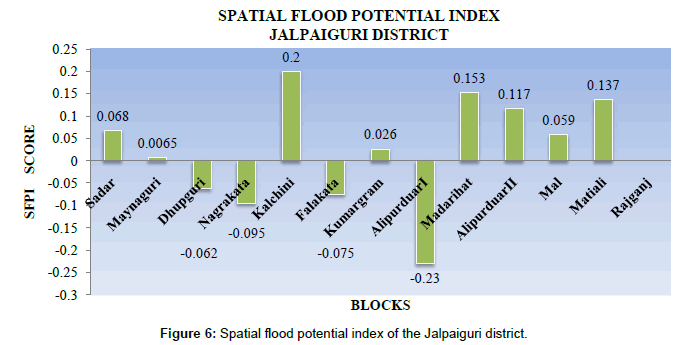 Copyright: © 2017 Das M, et al. This is an open-access article distributed under the terms of the Creative Commons Attribution License, which permits unrestricted use, distribution, and reproduction in any medium, provided the original author and source are credited.