The most clinical scoring of traumatic brain injury patient is Glasgow Coma Scale (GCS) score. Lower GCS score higher IL-6 level and higher morbidity and mortality. Neuroinflammation is one mechanism of secondary brain injury. Selective cyclooxygenase (sCOX-2) inhibitors are drugs commonly used in treatment of postoperative pain but also possess an anti-inflammatory effect. The aim of this study is to determine the role of sCOX-2 inhibitors as inhibitors of inflammatory processes in patients with head injury measured by IL-6.

The study is concluded that sCOX-2 inhibitor has a brain protective effect by lowering IL-6 level in patients with moderate head injury.

Head injury will stimulate neural cells to synthesize and release inflammatory cytokines such as peptides from interleukin (IL) group and TNF-α. Patients with moderate head injury have increased levels of IL-1, IL-6, and TNF-α in their circulation and cerebrospinal fluid [3-6].

After head injury in mice, microglia is responsible for IL-1 and IL-6 production. Astroglial have demonstrated the relationship between upregulation with inflammatory cytokines such as IL-1α, IL-1β, and TNF-α in post-traumatic murine. In humans with head injury, as part of inflammatory response, microcelullar endothelial cells release IL-1β and TNF-α that will eventually stimulate the release of neurotoxic agents such as arachidonic acid and their metabolites [3-6].

In head injury, inflammatory response affects injured brain tissue. Inflammatory stress response is part of the complement activation and upregulation of endothelial cells that are linked with neutrophil accumulation and cytokine production. The role of proinflammatory mediator in formation of secondary lesions has been investigated, including serial mediators such as cytokine. Among the cytokines, IL-1β, TNF-a, IL-6 and IL-8 are especially important [4,5,7].

IL-6 has both pro- and anti-inflammatory properties. High level of IL-6 in the plasma and cerebrospinal fluid are found in post-traumatic brain injury patients. IL-6 may also promote vasopression secretion and plays a role in the pathogenesis of syndrome of inappropriate antidiuretic hormone (SIADH) after traumatic brain injury [4,5,7].

COX-2 inhibitors are potent neuroprotectors both in vitro and in vivo. Inhibition of COX-2 protected neurons in mixed cultures against NMDA excitotoxicity. Significantly, COX-2 specific inhibition blocked neuronal cell death, whereas COX-1 specific inhibition did not [8].

The aim of this study is to examine whether the administration of COX-2 inhibitor will reduce IL-6 as inflammatory marker and if so, whether COX-2 inhibitor has a brain protection effect in patients with traumatic brain injury.

Sample size is determined based on formula sample of five groups using Kastenbaum curve with confidence level of 95% and power test of 80% and d/s=0.5 therefore each group contains of 6 subjects. Total number of subjects is 30 patients with 10% drop out yielding 33 patients. Statistical analyses for characteristic data using One Way ANOVA, with gender variable as the exception using Chi-Square, significant statistical difference if p<0.05 and very significant statistical difference if p<0.01.

Study is conducted after obtaining ethical clearance from Ethical Commitee of Medical Faculty of Universitas Padjadjaran/Hasan Sadikin Hospital Bandung Indonesia. After obtaining informed consent, patients with moderate head injury (GCS 9-12) without other injuries were positioned 300 head up along with examination of non-invasive blood pressure, core temperature, blood glucose and SpO2.

Analysis on characteristic data shows no statistical difference with p>0.05 among the five groups therefore eliglible for comparison. The result of statistical analysis of general characteristic is displayed on Table 1 below. Comparison of IL-6 in all groups can be seen in Tables 2 and 3 below.

Table 3: Comparison of IL-6 between treatment (COX-2) and Control Group.

Table 1 and Figure 1 show a reduction of IL-6 from preoperative to post (operative in all groups, both treatment and control. However, the reduction in IL-6 level in each group is not significant, shown by p value>0.05 using paired t-test. 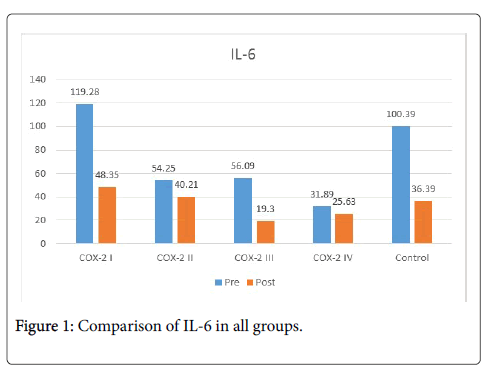 Figure 1: Comparison of IL-6 in all groups.

Table 2 and Figure 2 above show significant reduction in IL-6 (p<0.05) from 72.38 pg/mL to 33.97 pg/mL. We can conclude that there is a reduction in average level of IL-6 in all treatment group (n=30) from preoperative to postoperative, however, if assess individually for each group, where number of sample is 6, the difference is not statistically significant (p>0.05). 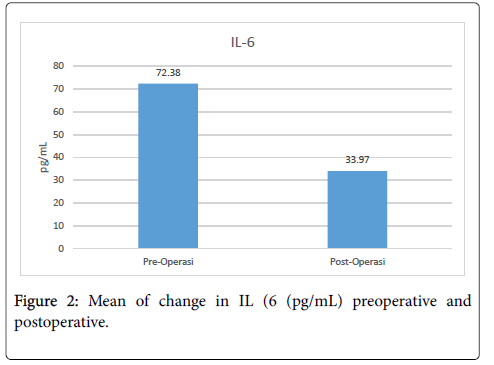 Figure 2: Mean of change in IL (6 (pg/mL) preoperative and postoperative.

This may be explained by reduction of IL-6 level only occurs in a few number of samples, whereas a few other samples experience an increase in IL-6 level.

Cyclooxygenase (COX) is an enzyme that catalyzes prostaglandin synthesis from arachidonic acid. Prostaglandin mediates many processes in the body including secretion of gastric protective layer, maintenance of renal function, and platelet aggregation. Nonsteroidal anti-inflammatory drugs (NSAID) block the mechanism of COX therefore reduce the formation of prostaglandin, resulting in both positive (analgesia, anti-inflammation) and negative (gastric ulceration, reduction in renal function, bleeding) outcomes. The activity of COX is linked with 2 isoenzymes, namely COX-1 and COX-2. COX-1 is found mainly in gastric mucosa, renal parenchyme and platelet. COX-1 has minimal effect on pro (inflammatory hormonal response. This enzyme is essential in homeostasis such as platelet aggregation, maintenance of gastrointestinal mucosal integrity and renal function. On the contrary, COX-2 causes and is expressed in injured tissues (renal and brain) and mediates inflammation, fever, pain and carcinogenesis. COX-2 does not have a protective role. COX-2 expression may fascilitate a few oncogenic processes, such as tumor invasion, angiogenesis, haematemesis. Regulation of COX-2 occurs in spinal cord in response to surgical stimulation which may play an important role in central sensitization. In response to inflammation, COX-2 expression increases by 10-20 times [9-12].

Nonsteroidal antiinflamatory drugs (NSAID) suppress prostaglandin and tromboxane, which play an important role in gastric homeostasis (PGE2 and PGI2), renal (PGE2) and platelets (thromboxane A2 and PGI2), the primary mechanism where NSAID cause some negative effects. Additionally, inhibition of prostaglandin synthesis by NSAID has been considered to contribute to bronchospasm and inhibition for new bone formation [13].

Nonsteroidal antiinflamatory drugs (NSAID) is drug with analgesia, anti (inflammatory and anti (pyretic effects. These drugs are categorized as conventionl none (specific inhibitor in two forms, COX (ibuprofen, naproxen, aspirin, acetaminofen, ketorolac) and selective COX-2 inhibitor (celecoxib, rofecoxib, valdecoxib, parecoxib). All NSAID and COX-2 inhibitors have ceiling effects and increasing their dosage will only increase the risks of toxicity. Inhibition of COX-1 is responsible for many adverse effects caused by conventional NSAID [9-13].

Non-steroidal anti-inflammatory drugs (NSAID) work peripherally (without involvement of central nervous system) and the analgesia effect is secondary to anti (inflammatory effect, caused by inhibition of prostaglandin. Inhibition of prostaglandin is also responsible for the main adverse effects namely platelet dysfunction and gastritis. NSAID are commonly used as a single agent for mild and moderate postoperative pain. NSAID have an opioid sparing effect if used in conjunction with opioid. Considering the advantages and disadvantages, they are only used to 1-2 days. NSAID are contraindicated in patients with bleeding disorder, receiving anti (coagulants, history of peptide ulcer disease and gastritis, and renal dysfunction [9-13].

Nonsteroidal anti-inflammatory drugs (NSAID) are drug with analgesia, anti (inflammatory and anti (pyretic effects. NSAID have both central and peripheral effects. Anti (pyretic is achieved centrally though hypothalamus whereas analgesia is peripherally. Latest studies showed that there is an also possible central analgesia effect through inhibition of descending pain pathway. Most dominant theory is that NSAID works peripherally through inhibition of prostaglandin synthesis therefore reducing inflammation and pain. Prostaglandin synthesis is prevented by inhibition of COX-2. Cyclooxygenase-2 (COX-2) converts arachidonic acid from cellular damage into prostaglandin D, E and F, prostacylin and thromboxane. Damaged cells and activation of phospholipase release arachidonic acid, which will be converted into prostanoid and leukotriene by COX-2 and lipooxygenase, resulting in production of reactive free radicals [13].

The role of COX (2 and its inhibition in the brain must be evaluated in a broader context than metabolism of arachidonic acid. Pertubation or brain insult will activate phospholipase, releasing arachidonic acid from membrane reserve. Cyclooxygenase-2 (COX-2) catalyses the conversion of arachidonic acid and molecular oxygen into vasoactive prostaglandin, a process which produces free radicals [9-14].

Cyclooxygenase-2 (COX-2) overexpression illustrates marker and effector from damage cells after brain injury, and in normal and pathological aging proses in the brain. Cyclooxygenase-2 (COX-2) inhibitor may have a neuroprotective effect by reducing prostanoid and free radical production, or by substituting metabolic pathway of arachidonic acid. Arachidonic shunting hypothesis states that neuroprotective effect of COX-2 inhibitor may be mediated by the increase of production of eicosinoids. Under the condition where activation of COX-2 is inhibited, accumulation of arachidonic acid or conversion into eicosanoids through lipooxygenase and cytochrome P (450-CYP) epoxygenase. A number of P450 eicosanoid have been shown to have a beneficial effect on brain tissue and/or peripherally. We suspect that shunting of arachidonic acid may play an important role in functional recovery after brain injury that alters prostanoid per se. Therefore, inhibition of COX-2 and arachidonic acid shunting has a therapeutic implication outside the suppression of prostaglandin synthesis and formation of free radicals [9-14].

The severity of neural injury appears to correlate to the degree and duration of COX-2 overexpression, mild injury yield shorter elevation (≤ 24 h) of COX-2 mRNA and prostaglandin production, while moderate to severe injuries yield extended elevation (≥ 3days) in brain cells. This may due to a vicious cycle, in which secondary injury cascades promulgate COX-2 expressions. Increase COX-2 expression has been observed with head trauma, cerebral ischemia, spreading depression, and seizure. Overexpression of brain COX-2 may reflect its role in chronic inflammation and neural cell death. Early on after moderate brain injury, neuron show increase COX-2 level that may persist for 1-3 days [8].

Several COX-2 specific inhibitors have been employed to treat brain injury. Their efficacy, when administered at various dose and time before or after neurological insult has not been entirely consistent, perhaps because of widely different partition coefficients across the blood-brain barrier [8]. However, the overwhelming preponderance of evidence clearly shows that protracted brain COX-2 activity mediates a toxic response that worsen functional and neuroanatomical deficits after brain and spinal cord injury. Thus, COX-2 inhibitors that benefit in the injured brain likely produce their effect primarily by reducing COX-2 activity rather than by supressing free radical-mediated brain damage or other specific mechanism [8].

In this study, administration of COX-2 inhibitor blocks the production of COX-2 which reduces overexpression of COX-2, therefore reducing neural cell damage, shown by a reduction in IL-6 level.

The study concludes that COX-2 inhibitor has a brain protective effect by lowering IL-6 level in patients with moderate head injury.

Copyright: © 2017 Bisri DY, et al. This is an open-access article distributed under the terms of the Creative Commons Attribution License, which permits unrestricted use, distribution, and reproduction in any medium, provided the original author and source are credited.
Top
betsoobetasus girisdumanbetkralbet supertotobet girisbetmatik giris adresimariobetbetturkey giris bahiscom girisasyabahis girisasyabahis giris