Satellite Based Surveillance of LULC with Deliberation on Urban Land Surface Temperature and Precipitation Pattern Changes of Karachi, Pakistan

Satellite Based Surveillance of LULC with Deliberation on Urban Land Surface Temperature and Precipitation Pattern Changes of Karachi, Pakistan

Change detection helps to determine the vicissitudes of land use/land cover properties by perceiving them in different times. Substantially, it includes the ability to measure temporal effects by utilizing multi-temporal data sets. In this research, Landsat satellite data is used to identify the temporal change by using diverse techniques of remote sensing and geographic information system. The current research is based upon Karachi Division to observe the spatial change of land use/land cover with urban land surface temperature and precipitation level in between the years 1998 and 2018 for the period of 20 years. Satellite imagery that is used to classify LULC features are for the years 1998, 2008 and 2018 for better visualization of the temporal situation. In this research, LULC area was observed to identify the changes in two decades from 1998-2008 and 2008-2018 and as whole era 1998-2018. The results shows urbanization (built up area) and barren land were increased by 5.47% and 1.16%, respectively; while a noticeable decrease of 6.82% has been noticed in vegetation of Karachi. Urban land surface temperature has been increased in observed time period such as: upper temperature increased up to 4°C and present lowest temperature, 5°C higher than before. Precipitation in the observed time period shows the terrific changes. However the highest precipitation mean was recorded in 2003 and this record will not be surpassed till 2017.

The sustainable management of land use needs monitoring, understanding the dynamics of changes, ecosystem response to social and natural pressures, information providing on planning for natural resource conservation and GIS technique has much accuracy level for future planning [1]. Land use change generates new patterns of urban sprawl. Urban sprawl is divided into separate dimensions including concentration, density, continuity, and proximity, centrality, clustering, and mixed uses [2]. Urban growth in most countries includes widening process and expanding pattern; however, procedures such as expansion and sprawl are just a part of urban growth procedure [3]. Urbanization and urban development have been considered as one of the fundamental pointers of monetary development and improvement of a nation [4].

The way the development and financial process occur in urban zones it requires adequate land residential, industrial, commercial purpose, hospitals and schools. Today, unplanned land use change is a major problem. Impromptu urban development, especially in creating nations has prompted changes in land use/land cover [5]. Changing the land uses has direct effect on hydrological cycles. In addition, hydrological processes like interception, penetration, evaporation, soil moisture, runoff and ground water are affected by the characteristics of land use and land cover of the basin [6]. At the present time, remote sensing is the advanced tools for mapping and LULC assessment and temporal changes of the LULC features also identified with GIS and remote sensing [7,8]. Changing the land use land cover is a surface dynamic process. Spatial distribution of changes in a time period is important issue in studies related to natural resources [9]. Land use/land cover change has been assessed with GIS for effective results in less time and cost and urban development, especially the development of residential and commercial land to provincial regions at the outskirts of metropolitan territories, has for a long while been seen as a sign of local monetary imperativeness [10-12]. Patterns in urban development are inspected here using satellite imagery. Remote detecting is financially savvy and innovatively solid, and is subsequently, progressively utilized for the examination of urban sprawl [11,13]. According to Sun et al. [14], noticed remote sensing and geographical information system are useful in analysing the land cover changes in basins. In fact, multi-temporal data which is obtained from remote sensing are so effective in mapping and detecting changes of landscape in order to planning and consistent managing. Furthermore, using remote sensing and incorporating it with GIS can be used to obtain environmental data [15]. By mixing the data obtained from remote sensing and GIS to analysing and categorizing the land cover changes pattern during time will be possible and changes would be detectable [13]. Rainfall of Karachi decreased in between the years 1991 and 2005 with respect to 1976-1990 and the noticeable mean difference was -14.72 [16]. Due to low rainfall droughts are occurred in Sindh and Baluchistan (Provinces), Pakistan [17].Various researchers all over the world have been done numerous studies about the land use change detection by different analysing methods [18]. GIS and remote sensing is used to monitor and detect the surface temperature and its effects on urban areas [19,20]. Main purpose of this research is to identify the temporal LULC changes and to observe the urban land surface temperature and perception cycle; how much it has variations. 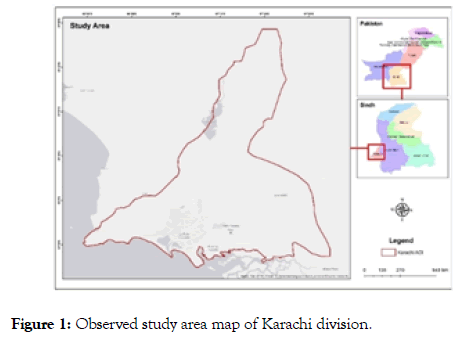 Satellite images required pre-processing to ensure that it could be set up into a more straightforward association between obtained information and biophysical phenomena [23]. Image pre-processing used to perform the LULC classification for better results. In this research image pre-processing approach was accomplished as atmospheric correction, mosaicking and subsetting of the satellite imagery for the study area.

Remote sensing is an appropriate technique for information collection [1]. Remote sensing and GIS gives innovation and strategies to information coordination and spatial examination. LULC maps of the study area were prepared through supervised classification of Landsat satellite data using Maximum Likelihood Classification (MLC) algorithm [24]. Supervised MLC is the most generally utilized technique. In this research firstly, collection and processing of temporal satellite imagery were done for detection of spatial change in LULC; whereas secondly the geospatial analysis were carried out. LULC classification and change detection analysis were used to observe temporal changes; urban sprawl identification and land surface temperature were also used to analyse the difference. Most extreme probability directed characterization was performed on the study area in light of outlined classes of vegetation, built-up areas, water, and barren land (Table 2).

The research results in terms of both static and changed land utilization arrive front of each class (vegetation, built up, water and barren land) for the investigation time frame of 1998-2018. GIS and RS technique based data were used to monitor the land use/land cover in an efficient way.

In 1998 total built up was 466.5 km2 which includes all residential, commercial, industrial and transportation. In 2008 it was increased to 631.6 km2 and in 2018 it further rose up to 666.18 km2 which cost cut down of vegetation. Dadras et al. [26] indicates that increase in urban sprawl based upon population augmentation with the passage of time. Figure 2 clearly depicts the rate of change in built-up area in between the time frame of 1998 to 2018 which stipulates the urban sprawl trend due to urbanization. 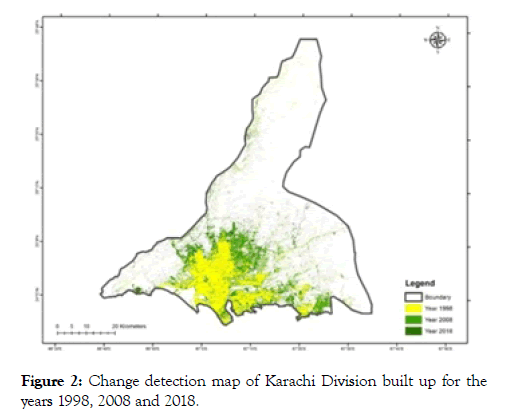 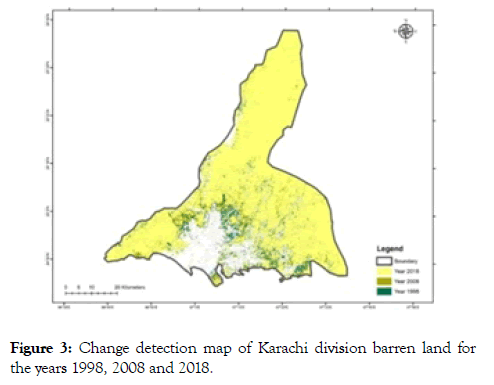 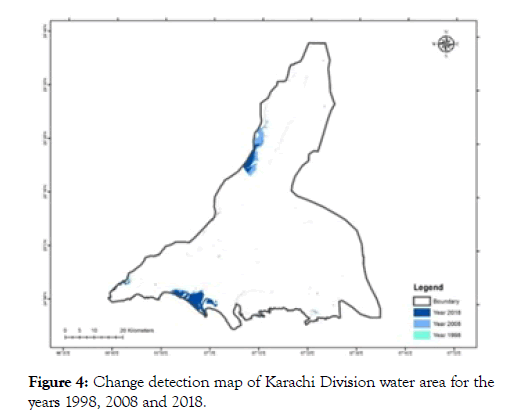 Temporal change in LULC with respective to urbanization

The inclusive comparison of land use/land cover in three decades and a huge change is also perceived in this regard (Figure 6). Area calculation by the results of classification is in km2 and shown in Table 3. Figure 7 is demonstrating the progressions in area of the land use/land cover for the years 1998, 2008 and 2018. In this research, increase in urbanization directly based upon the rapidly changed in built up. Results are totally based upon the observed area of Karachi Division. 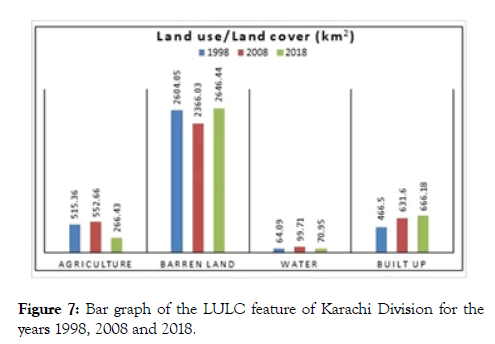 Table 4 is showing the magnitude and percentage of LULC classes in which increase and decreased trend easily revealed. Research results clearly showing the agriculture land decreased with ratio 6.82% with respect to whole observed area. On the other hand built up, barren land and water has been increased by 5.47%, 1.16% and 0.19%, respectively.

In this research derived map is based upon the available data. Due to urbanization, night time activities also increased. Night time lights have dangerous effects such as vegetation loss, temperature increases, air and water pollution as well as growth of urban slums and un-employment [27]. Changes in temperature happen due to LULC change and global warming [28]. Increase in vegetation can reduce the surface temperature and increase urbanization is the one of the symptom of vegetation loss [29,30]. In this research, vegetation has been decreased in between 1998 and 2018. It is also noticed that the overall temperature much increasers due to the urbanization in between the years 1998 and 2018 (Figure 8). Figure 8: Satellite based land surface temperature map for the years 1998 and 2018.

This research determined that the temperature difference of congested built up area that may has been increased due to the urban sprawl. Temperature calculated from Landsat satellite for the month of May 1998 and 2018. In 1998, the lowest temperate is 17°C; now in 2018 it increased up to 23°C. On the other hand, highest temperature also increased up to 4°C; that is alarming situation.

Different cases study related to climate, fire, droughts and agriculture done by using climate engine and Google Earth engine. Real time data can be created by use of climate engine. Climate engine is an application that design for users to execute time series visualization and analysis [31]. Figure 9 showing the result of climate engine that based upon the CHIRPS dataset measurement. In this research precipitation result shows the annual precipitation mean in millimetres (mm) in the observed time period. Figure 9 is showing that the precipitation pattern in which rainfall has been decreased after the year 2003. In the whole time period rainfall has fluctuate apparently such as; it was increased in 2003 with respect to 1998-2002 measurements. The results indicate the rainfall measurement is not exceeding from 2004 to 2017 with respect to the year 2003. Raza et al. This paper aims to investigate the LULC changes and impact of urbanization on temperature of Karachi in between 1998 and 2018 based on Remote Sensing and GIS techniques. The study shows 199.68 km2 of considerable increase in total urban builtup area of the study area in two decades (1998 to 2018). Henceforth, it is determined that in Karachi, urbanization is emerging at a greater rate that is examined successfully using GIS and remote sensing techniques with Landsat Satellite imagery. The other main change observed is in agricultural land area that goes up in stretch of time (1998-2008), while in between 2008 and 2018 agriculture area decreased in the study area. The research territory saw vast measure of change in land use from agriculture land to settlements and other urban progression activities. In the same way water areas, for example, waterways/streams, and repositories are smidgen expanded in the observed time period. While the barren land area that observed in Karachi division is decreased; as the result of settlements/built-up area that has been established due to population growth in the observed time period. Urban land surface temperature much increased in the observed time period. So, considering these major observations, there is a dire need to address the urbanization issues to safeguard the prime agriculture land of Karachi to maintain required balance in each land use for sustainable growth of Karachi because due to urbanization the night time activities also increase that directly effect on the temperature of the study area. In this research it is also notice the rainfall cycle has not been constant it also has abrupt change every year. In the observed time period the precipitation that noticed highest was in 2003. By the end of the year 2017 precipitation measurement recorded not more than the results of the year 2003. In the light of overall research perceived that haphazard increase in demographics and land development pattern of Karachi causing environment, urban development challenges which need serious consideration.

Copyright: Ã‚Â© 2019 Raza D, et al. This is an open-access article distributed under the terms of the Creative Commons Attribution License, which permits unrestricted use, distribution, and reproduction in any medium, provided the original author and source are credited.