Conclusion: Sevoflurane, as compared to ketamine, resulted in stable and favorable effects on systemic hemodynamics and myocardial energetic in children with ventricular septal defect.

The primary goal, and also challenge, of anesthetic management during pediatric cardiac surgery is to maintain hemodynamic stability. This is because children with congenital heart disease (CHD) have limited reserve of cardiovascular function. The brief period of anesthetic induction may be associated with adverse systemic hemodynamic, therefore requires particular attention.

Sevoflurane or ketamine [1-4] are both extensively used in children undergoing cardiac catheterization or surgery. But knowledge about their effects on systemic hemodynamic remains limited largely due to the technical difficulties in direct assessments of these variables. Sevoflurane has been considered as well tolerated and did not induce any significant change in pulmonary to systemic blood flow ratio in children with CHD [5-7]. Ketamine, as a potent analgesic agent, is preferred by some others [8-10]. One study compared ketamine and sevoflurane in CHD children, and showed that ketamine maintained a higher arterial pressure and heart rate, whereas sevoflurane induced a transient decrease in arterial pressure [9]. In that study, only heart rate and arterial pressure, i.e., indirect indicators in clinical routine monitoring were used. It has been learned that these indirect indicators do not accurately reflect a true hemodynamic status [11,12].

Efforts have been made to develop techniques to direct assess hemodynamic parameters, such as stroke volume (SV), cardiac output (CO), systemic vascular resistance (SVR) etc. Among them, thermodilution method has been widely used. But the presence of inter-ventricular shunt, pulmonary and tricuspid regurgitation commonly seen in CHD precludes the use. In addition, the repeated cold saline injections may affect the physiological status. The Fick principle using the directly measured systemic oxygen consumption such as by respiratory mass spectrometry remains the gold standard method, and has been used in varied circulations in children with CHD [13,14]. However, respiratory mass spectrometry is technically and timely highly demanding and hardly used outside of clinical research setting. Pressure recording analytical method (PRAM, MostCare, Vygon-Vytech, Padova, Italy) is a minimally invasive and userfriendly method to provide direct and continuous measurements of systemic hemodynamics based on mathematical analysis of the arterial waveform. One recent study validated PRAM against the Fick method in pediatrics underwent cardiac catheterization, which found a close correlation in the measurements of cardiac index [15]. Therefore, our study aimed to use PRAM to examine the effects of ketamine and sevoflurane induction on systemic hemodynamics in children undergoing surgery for complete repair of ventricular septal defect.

This study was approved by the Medical Ethics Committee of Capital Medical University affiliated Beijing Anzhen Hospital. During the period from September 2014 to February 2015, children younger than 3 years scheduled for complete repair of ventricular septal defect using cardiopulmonary bypass were enrolled in the study, written informed consent was obtained from the parents of children. Patients were excluded if they had severe pulmonary arterial hypertension (mean pulmonary arterial pressure >50 mmHg), or aortic disease (e.g., aortic valve regurgitation and aortic coarctation), cardiac dysfunction (ejection fraction <50%).

The design and setup of PRAM has been described in our previous study [16]. PRAM provided averaged beat-to-beat calculated data in 30 seconds and displayed data on the screen continuously. Data was stored in the device and could be downloaded in spread sheets for offline analysis.

This was a prospective observational study. After admission to the operating room, children were randomized into one of the two induction protocols, inhaled sevoflurane (group S) or intramuscular ketamine (group K). Randomization was based on a computer-generated random table. Investigator analyzing the data was unaware of the patients’ group assignment.

In both groups, routine clinical monitoring consisted of electrocardiogram, peripheral pulse oxygen saturation, 100% oxygen at 5 L/min was delivered via a face mask. In group S, the anesthesia machine circuit was primed with 6% sevoflurane till end-tidal concentration was 2.0 minimal alveolar concentrations (MAC). Sevoflurane was delivered, after body immobility was obtained in less than 2 min the concentration was decreased to 1.5-1.0 MAC. In group K, intramuscular injection of ketamine (10 mg/kg) was administrated, body immobility was obtained in 3-5 min. Subsequently in both groups, a peripheral intravenous catheter and a radial arterial catheter were inserted in 3 min to establish intravenous access, clinical routine monitoring of arterial pressure and advanced monitoring of PRAM. Fast flush test [17] was employed to investigate signal artifacts. Then intravenous pipecuronium (0.2 mg/kg), midazolam (0.2 mg/kg) and sufentanil (1 μg/kg) were given quickly. After sufentanil delivered, sevoflurane administration was stopped immediately in group S, 5 min later intubation was performed in 3 min in both groups. Mechanical ventilation was initiated with FiO2 50%, tidal volume 10 ml/kg and respiratory frequency 15-25/min to maintain PETCO2 at 35-40 mmHg.

A total of 43 children were enrolled in the study. Flow diagram of randomization and study groups were shown (Figure 1). The demographic data of the two groups of patients were similar (Table 1). Diameters of VSD (mean ± SD) were 5.7 ± 3.0 mm in group K vs. 5.4 ± 2.9 mm in group S (p>0.05). All the patients had a successful operation. None of them had significant adverse events such as hypotension, cardiac arrest or severe arrhythmia during the study period. 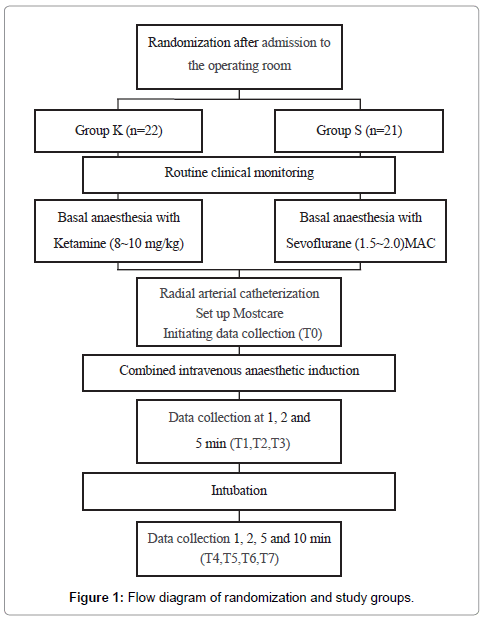 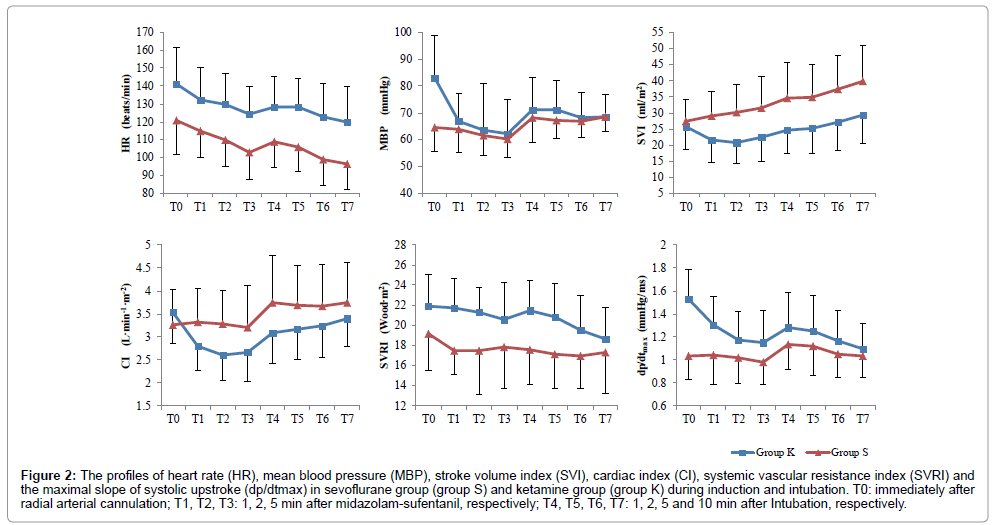 Due to child’s weeping and resistance during pediatric surgery, intravenous catheter is difficult to place; inhaled sevoflurane and intravascular ketamine are usually used to facilitate sedation, analgesia and immobility. Then intravenous access was established for resuscitation and drug administration. Meanwhile, inductions with high concentration sevoflurane decreases heart function in a dose dependent manner [18] and cannot provide satisfactory intubation within 3 min [19]. Ketamine cannot induce intubation without adjunct use of sedatives and muscle relaxants. Intravenous anesthetics with minor circulatory depressant effects were delivered afterwards to complete anesthesia induction.

One study, using indirect clinical routine hemodynamic monitoring of heart rate and arterial pressure [9], showed that ketamine maintained a higher blood pressure and heart rate, whereas sevoflurane induced a transient decrease in blood pressure. Based on these observations, the authors suggested that ketamine was a safer alternative in pediatric cardiac surgery. It is well documented that ketamine exerts sympathetic stimulating effects in the presence of intact sympathetic and autonomic nervous system. It has also been learned that intravenous anesthetics may effectively block sympathetic reflex activity and reduce heart rate. Our data showed that arterial pressures in ketamine group rapidly declined and became close to the levels in sevoflurane group after the administration of midazolam-sufentanil. The initially higher HR and arterial pressures after ketamine injection and their subsequent fast decrease after midazolam-sufentanil reflect substantial and unfavorable fluctuations in systemic hemodynamic following intramuscular ejection of ketamine.

More importantly, the direct monitoring of systemic hemodynamic using the minimally invasive technique PRAM in our study helps to reveal the profound adverse effects of ketamine as compared to sevoflurane. The substantial fluctuations found in heart rate and arterial pressure were also observed in most of the directly estimated parameters i.e., SVI, CI, SVRI, dp/dtmax, RPP and CPO in the ketamine group. Moreover, SVRI was significantly higher throughout the entire induction period and after intubation, and associated with a continuously and significantly lower SVI (p=0.02). This may be attributed by two factors. First, the sympathetic stimulating effect of ketamine may not be completely blocked by the subsequent combined intravenous anesthetic agents. Second, sevoflurane may serve as a weak vasodilator [20]. The overall level of CI was significantly lower in ketamine group as compared to sevoflurane group, although ketamine causes higher heart rate, dp/dtmax and RPP, manifesting higher myocardial oxygen consumption. Indeed, CPO tended to be lower in ketamine group, and each increase of CPO was associated with a greater RPP, indicating unfavorable myocardial energetic effects.

The information obtained from our study may have important clinical implications in CHD children undergoing surgery. Ketamine preserved myocardial contractility with adverse higher SVRI. In children with large ventricular septal defect, the direction and magnitude of cardiac shunt depends on impedance of systemic and pulmonary circulation. Significant increase in SVRI may lead to an undesirable increase in left-to-right shunt and pulmonary blood flow. Midazolam-sufentanil was used in our clinical practice because they prohibit inotropic status and arterial resistance mildly, the smooth profile of SVI, CI, dp/dtmax, and SVRI after midazolam-sufentanil administered in group S also proved this point. As an alternative sedative agent, propofol has profound vasodilation and impedance reducing effects. Combination of ketamine and propofol might provide improved hemodynamic situation, preserved myocardial contractility and optimized afterload, during anesthesia induction and maintaince. This “kepofol” protocol has been demonstrated in various groups of patients [21-24] and needs to be further studied in CHD children. On the other hand, ketamine is used for induction in children with severe heart failure [25] because it tends to enhance cardiac contractility and CO, our study reveals counteracting intravenous anesthetics could result dramatically decrease in cardiac contractility and CO, this should be paid attention to avoid life-threatening hemodynamic instability.

The study has several limitations. First, hemodynamic measurements prior to the induction of anesthesia were not provided. Therefore, alterations in patient hemodynamics during anesthesia induction were not fully characterized. This is because it’s impossible to place an arterial catheter without sedation and analgesia in children. Secondly, the differences observed in our study between the two groups may be confounded by the fact that the two anesthetic induction agents, inhaled sevoflurane and intramuscular ketamine, are eliminated with different kinetics, sevoflurane is fast and ketamine slow. However, this study is originated from clinical practice, thus providing more real and valuable information for clinicians. Thirdly, PRAM device has limitations in itself, an over-or under-damping signal from arterial transducer reduces the accuracy to calculate CO. We used fast flush test to discriminate whether artifacts exits. Consequently none of our patients were excluded from the study due to unliable arterial pressure contours, potentially due to special arterial properties in children.

Compared with ketamine-midazolam-sufentanil; Sevofluranemidazolam- sufentanil resulted in stable and favorable systemic hemodynamics and myocardial energetic in children undergoing surgery. These findings indicate sevoflurane may be a good alternative anesthetic during anesthesia induction in CHD children.

Copyright: © 2017 Han D, et al. This is an open-access article distributed under the terms of the Creative Commons Attribution License, which permits unrestricted use, distribution, and reproduction in any medium, provided the original author and source are credited.
Top
betsoobetasus girisdumanbetkralbet supertotobet girisbetmatik giris adresimariobetbetturkey giris bahiscom girisasyabahis girisasyabahis giris