Psychological stress and distress, typically in the late second trimester and third trimester has been linked with low birth weight [1-4]. Stress during pregnancy influences the growth and development of the baby in the later stages of life [5-6].

Many of the stressed women suffer from common mental health disorder during early pregnancy and in the postpartum period [7]. Prevalence of stress during pregnancy has been found to range from 6% to as high as 52.9% in developing countries [8,9].Stress during pregnancy is more among the teenagers, low educational status, discriminated group of population or with low socioeconomic status [10].

General Health Questionnaire (GHQ) is a screening tool to identify the severity of psychological distress experienced by an individual within the past few weeks [9].The GHQ, which was originally developed by Goldberg, has been widely used.It has been validated in many languages including Nepalese [10]. Sensitivity and specificity of GHQ-12 has been found to be as high as 85% and 79% respectively [11]. It has been well established in identifying stress during pregnancy [12]. Mean score of GHQ has been used as a reference to evaluate the level of stress [13,14].

A prospective observational study was conducted in the Antenatal Clinic of Patan Hospital between March and December 2012. Pregnant womencoming to the ANC clinic of Patan Hospital were included in the study. Stress was measured using “GHQ -12” and “Modified Life Events Inventory” containing 21 items. Interview was conducted twice during pregnancy, first during the late first trimester or early second trimester (between 12-20 weeks of pregnancy)and then during the third trimester (mostly between 30-36 weeks of pregnancy). All the pregnant ladies with singleton fetus were included in the study. Exclusion criteria included multiple pregnancies, known co-morbidities during the first trimester of pregnancy and those who refused to give consent for the study. Those who refused to participate further were also excluded from the study.

Data was collected by using the validated Nepalese version of the General Health Questionnaire (GHQ-12). Stressful life events were identified using modified life events inventory. Some of the events that in particular will not fit into Nepalese social customwere removed. Life events as per modified life events inventory was also translated into Nepalese Language. Research tools were validated among a separate population of the pregnant women attending ANC clinic using 10% of the required sample size.Validation study revealed no difficulty in using the questionnaire. The average time taken by the respondents was around 7 minutes (5-11 minutes). Some minor changes and corrections were made to the final questionnaire after the validation study.

Principle investigator informed all the participants who agreed to take part in the study were well about the study and its objectives. They were made clear that their participation was voluntary. A written informed consent was obtained. Identifiable information, such as contact number was taken and kept confidential for follow up purpose. Interview was conducted using a semi-structured questionnaire. Principal investigator offered help to those respondents who needed assistance in filling out the questionnaire. Those respondents who couldn’t be traced during the second visit in the scheduled date were contacted by telephone and requested to meet the principle researcher for the follow up interview. Using the Likert scoring system, the minimum score for each statement was “0” and maximum score was “3”. We had scores ranging from 0-36. Mean value was the limiting point for stress. Women with scores above the mean value were considered “women with stress” and those with scores below the mean value were considered “women without stress”.

The sample size calculation of the study was based on the major objective of the study, which was to determine the effect of stress with low birth weight and prematurity. With a hypothesis that the difference of fetal outcome between these two groups (stressed women and those with no stress) as 15%, with 95% confidence and a power to detect this difference of 80% and with a ratio of stressed and non-stressed pregnant women of 1:1, the total complete sample required was 226. Considering 5% loss to follow up and dropout rate of 19% in women attending ANC at various clinics and hospitals in Kathmandu Valley, a total sample size came out to be 275 [17,18].

Mean GHQ score in the first trimester was 9.79 (3 to 24, S.D. ± 3.74) whereas 9.69 (2 to 29, S.D. ± 4.43) in the second trimester. Median GHQ score for both trimesters was 9.The difference between the mean GHQ score in the two trimesters was not statistically significant. Mean score of GHQ (round figure of 10) was taken as landmark for identification of the level of stress.Respondents with GHQ score of less than 10 (<10) were considered as “not being stressed” and respondents with GHQ score more than 10 (>10) were considered as being “stressed”(Figure 1). 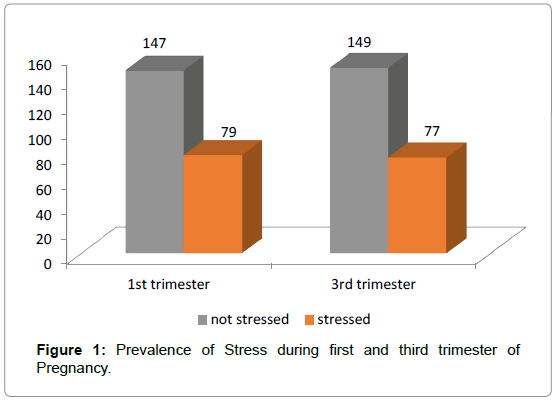 Figure 1: Prevalence of Stress during first and third trimester of Pregnancy.

With this landmark level of GHQ score, 79 (35 percentage) of the respondents were stressed during the 1st trimester of pregnancy. There was negligible change in the number of stressed respondents during the third trimester which stood at 77 (34.1percentage).

Stress during 1st trimester was significantly related to the total score on modified life events inventory. A score of 3 or more in modified life events inventory was significantly associated with stress (p=0.027). The difference was not statistically significant with age of the patient, family setup, family income, smoking habit of the patient, drinking habit of the husband and other parameters that we looked into (Table 1 and 2).

Table 1 show that the mean GHQ score during first and third trimester were 9.79 and 9.69 respectively and the median score being 9 in each trimester of pregnancy.

Table 2: Association of stress during first trimester with demographic parameters.

Stress during 3rd trimester was significantly related to the total score on modified life events inventory and counseling done during the ANC visit.A score of 3 or more in modified life events inventory was significantly associated with stress (p=<0.001). There was statistically significant relation of stress with counseling during ANC visit. Respondents who were counseled during ANC visit were less likely to be stressed than those who were not counseled (p=0.044). The difference was not statistically significant with age of the patient, family setup, family income, smoking habit of the patient, drinking habit of the husband and other parameters that we looked into (Table 3).

Table 3: Stress during 3rd trimester of pregnancy with demographic parameters.

Teenage pregnancy was 6.6%, which is very less compared to the national data [19-22]. A significant number of the respondents (43%) belong to the ethnic community which has inhabited Kathmandu valley from the very 15thcentury [23,24]. Level of education was lower than the findings of the recent study done in this area [25]. Most of the educated women are working and working women find it difficult during office hours to queue up in the general ANC clinic that generally takes 4-5 hours per visit. Patan Hospital also runs private clinic and private practice in parallel to general outpatient clinic. Most of the working women tend to have their ANC checkup in those clinics. This might be the reason for lower economic status, lower education status among the respondents, despite of them being mostly inhabitants of Kathmandu Valley. This is also the reason for more than half of the respondents being house wives.

Majority of the respondents were primi-gravida. Studies done in this area showed tendency towards antenatal care gradually decreases as the birth order increases [26]. Smoking rate was significantly lower in comparison to findings of other studies done in Nepal [1,27-30].

Seventeen percentage of the respondents still consumed alcohol even after being pregnant. This was higher than the rate of alcohol consumption among Nepalese women in Eastern Nepal [27,29-30].

Mean GHQ score of the respondents was 9.79 in the first trimester and 9.69 in the third trimester. The median score for GHQ was 9. The ratio of the mean and median score for GHQ was 1.08, which is within the range of 0.9-1.1 for uniform distribution of the data. Present study showed 34% prevalence of stress during pregnancy. The number of stressed women was similar to findings in the other studies. The median score in this study equaled the median score in a study conducted by Wisborg [12]. In a population based cohort study by Bussel, mean GHQ-12 score in Likert Scale was 12 among the study group and 11 among the control group [7]. Rahman, in a study in Pakistan showed the prevalence of antenatal depression to be around 24% [31]. Although they looked for depression, the prevalence was lower than present study. Similarly, in a study in India, prevalence of antenatal psychosocial stress was 42% which is much higher than the findings of this study [32]. Similarly, a study in Sweden detected 14% prevalence of psychiatric morbidity during antenatal period [33]. Newton in his study found showed stress during pregnancy was significantly related with age of the respondent [15] whereas in our study stress, either in first trimester or in the third trimester, was not related with age of the respondent.

Stress during first trimester of pregnancy with different demographic parameters

Similarly, women who were satisfied with the ANC counseling and services were less likely to be stressed (p=0.05). Counseling about different aspects of pregnancy, pregnancy associated symptoms, minor ailments and their prevention, birth preparedness and during ANC visit makes women easy to cope up with the pregnancy events and reduces anxiety due to pregnancy. Stress during third trimester of pregnancy was related with satisfaction of the respondent towards ANC services (p=0.05), counseling during ANC visit (p=0.04), daily work for 7 hours or more (p=0.05) and presence of 3 or more stressful life events (p<0.001).

Present study showed respondents with two or more stressful life events were more likely to score more on GHQ. This was statistically significant both in the first and third trimester. This result is consistent to the results from other studies in the past. In a study in Eastern Nepal, women experiencing stressful life events were two times more likely to have depression compared to the women without stressful events [8].

Stress during pregnancy was 34% in our study. There was no significant difference of the stress among pregnant women in the first and third trimester. Stress was related with the number of stressful life events, level of satisfaction with the ANC services, heavy work during pregnancy.

These findings are from one of the leading institute in the maternity care in the capital city, prevalence of stress among the rural women might be even higher than present study. Further studies need to be done in order to determine stress among pregnant women in other areas of the country. Concerned authorities need to address to reduce the stress among the pregnant women. This can be made possible by providing counseling to the women regarding different aspects of pregnancy, possible pregnancy related complications that can occur. Providing effective counseling reduces the level of stress which in turn reduces the adverse outcomes associated with stress.

Stress was measured by General Health Questionnaire-12, which just measures a probability of stress. Those respondents weren’t reviewed by a psychiatrist. So, we couldn’t really tell whether those stressful respondents had a psychiatric morbidity. Our study was conducted in one of the advanced centre in the readily accessible areas of the country. Findings of this study may not be generalized among the women of Nepal. Further researches need to be conducted before generalizing the results among the Nepalese women.

Copyright: © 2014 Pantha S, et al. This is an open-access article distributed under the terms of the Creative Commons Attribution License, which permits unrestricted use, distribution, and reproduction in any medium, provided the original author and source are credited.