Most patients with pancreatic head cancer (85%) are jaundiced at presentation. Obstructive jaundice is believed to increase postoperative complications. According to some experimental and clinical studies, preoperative biliary drainage (PBD) improves postoperative outcomes. However, numerous randomized studies found that PBD might increase postoperative complications rate. Thus, PBD or not is controversial. Objective: To confirm if PBD can be a routine or selective strategy in these patients. Material and methods: A retrospective study comparing PBD with surgery alone in 200 jaundiced patients with pancreatic head cancer from 2nd Department of Surgery-Hellenic Red Cross Hospital of Athens (1996-2011). Data from patient’s files including: Age, gender, smoking, diabetes history, Laboratory parameters, procedures, post-operative course. Results: The majority of patients (62.5% ) were males, with adenocarcinoma (93.5% ), smokers (65.0% ), and half of them were diabetics. The median age was 70 years, median tumor size was 5 cm ,while PBD was performed in 74 patients ( 37.0%) with higher laboratory parameters (Direct bilirubin 18 mg/dl vs 13 mg/dl. Total bilirubin 24 mg/dl vs 20 mg/dl) and in this group was marked: higher postoperative complications rate, higher ICU admission rate, higher postoperative mortality (17.6% vs 5.6%). Conclusion: We believe that PBD should be a selective strategy in jaundiced patients with pancreatic head cancer in case of fever, non- operability of patients, and in case of more advanced disease as a palliative alternative since, this method increases postoperative complications rate.

Pancreatic cancer is an aggressive neoplastic disease, with overall 5-years survival rate from all stages of less than 5%, making it, the 4th cause of cancer related death in the United States of America. Despite the innovation of diagnostic and therapeutic modalities during the year 2013 it was estimated that approximately [45] 2200 people were diagnosed with pancreatic adenocarcinoma and 38,460 died from it. With the majority of patients presenting with unrespectable tumor, locally advanced or metastatic disease and around 80% of patients are jaundiced [1]. For those with respectable tumor without evidence of metastasis, pancreaticoduodenectomy is the only option for cure, whereas radiation therapy, chemotherapy, and other newer experimental therapeutic modalities such as anti-hormonal therapy or systemic use of anti-pancreatic cancer cell monoclonal antibodies have not led to substantial prognostic improvements.

Obstructive jaundice is thought to increase the risk of perioperative and postoperative complications [2]. Experimental studies performed on mice assigned to biliary ligation to induce obstructive jaundice showed significant complications in these animals such as coagulopathy, Cholangitis, hepatic dysfunction, intestinal barrier derangement, immunity dysfunction, wound healing retardation, renal dysfunction, cardio- pulmonary insufficiencies as well as endotoxemia. Understanding well the pathophysiology of obstructive jaundice related complications in 1935 Sir A.O. Whipple first introduced the concept of preoperative biliary drainage in jaundiced patients with pancreatic head cancer in order to improve postoperative outcomes. Subsequently, Carter contributed with a percutaneous trans hepatic-cholangiography (PTC). In the late 1960s, McCune proposed the endoscopic retrograde cholangiopancreatography (ERCP), with stent insertion to explore the biliary tree and to decrease jaundice preoperatively. Numerous randomized controlled trials have addressed the issue of preoperative biliary drainage and its impact on perioperative and postoperative results [3,4]. However, reports on outcomes of pancreatoduodenectomy following PBD have been conflicting. Some studies have underlined increased pre-operative, intra-operative and postoperative complications related to PBD such as bleeding, pancreatitis, duodenal perforation, cholangitis, cholecystitis, cardiopulmonary events and miscellaneous [5-12]. In contrast, others have noted no adverse effect on perioperative and postoperative outcomes and on the other hand, some authors have even noticed amelioration of postoperative outcomes with this strategy‘s application [3].

Based on these considerations, the role of preoperative biliary drainage remains a matter of controversies. To assess its effects on postoperative outcomes, we performed this retrospective study.

This is a retrospective study, comparing preoperative biliary drainage with surgery alone in 200 jaundiced patients with pancreatic head cancer treated in the Second Surgical Department at the Hellenic Red Cross Hospital of Athens (Greece), from 1996 to 2011. Data collected from patients files including age, gender, life style, personal history of diabetes mellitus, laboratory parameters, surgical procedure, preoperative ERCP, postoperative course. We selected only jaundiced patients who were shifted to pancreato-duodenectomy by excluding those of palliative procedures. Enrolled patients were divided in two groups whether they were shifted to ERCP preoperatively or not. This comparative retrospective study was done using statistical analysis with R software version 3.3.1 (2016-06-21) Continuous variables were presented by using different measures (mean, standard deviation, interquartile range and range),while normality was tested through Shapiro-Wilk test and histograms, however none was considered to follow the normal distribution. Counts and percentages (N, %) were used for presenting categorical variables. Possible associations among categorical variables were assessed by Fisher’s exact test, while Kruskal- Wallis test was used for testing categorical with continuous variables. For ERCP-patients group, Wilcoxon signed rank’s test 5 was used regarding the comparison of laboratory parameters before and after biliary drainage .Respective bar-charts were created for graphical representation of the results .Univariate and multivariate logistic regression model 6 were used for assessing the odds ratio 7 regarding the number of postoperative outcomes (2+ vs. 0.0 1) comparing the two groups of jaundiced patients the collected parameters were included in multivariate analysis and significance level for all univariate and multivariate tests was set at α=5%.

The majority of jaundiced patients were males (62.5%), and smokers (65.0%) for many years, while almost half of them were diabetics. Most of them had adenocarcinoma (93.5%), The median age of patients was 70 years, the median tumor size was 5 cm at abdominal CT scan, while postoperatively 90 patients (45.0%) were admitted in ICU. Preoperative PBD was performed in 74 patients (37.0%). The ERCP-group patients had larger tumor size, were more smokers and diabetics (Tables 1 and 2), and had higher baseline laboratory parameters as well. Furthermore, 73.0% of PBD-patients were admitted in ICU immediately after surgical procedure, while the respective ICU admission rate for the model group was 28.6% (p-value <0.001).The median postoperative hospitalization length did not differ between the two groups. In patients of PBD-group there was significant decrease of laboratory parameters after ERCP, which in some cases was more than 50.0% especially for serum bilirubin (Table 3, Figures 1 and 2).

Table 3: Univariate analysis - Laboratory parameters before and after ERCP. 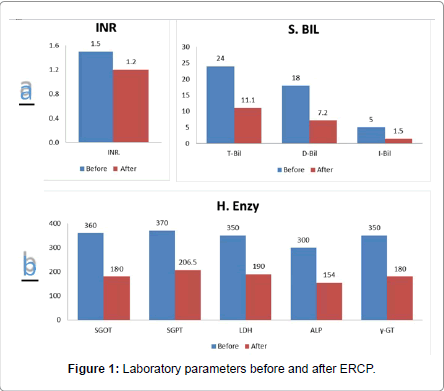 Figure 1: Laboratory parameters before and after ERCP.

Regarding postoperative outcomes between the two groups, PBDpatients differed from others in terms of occurrence of complications patients from the adverse group. Similarly, within patients of PBD, 17.6% experienced pancreatic fistula vs 6.3% and 39.2% respiratory infection vs 12.7%. In contrary, 27.0% of early surgery patients had DGE vs 10.8% in PBD-group (Figure 2). Considering the number of postoperative complications, the occurrence rate of more than one complications in PBD-patients is 47% vs 21% in patients from the early pancreaticoduodenectomy group (Figure 3). 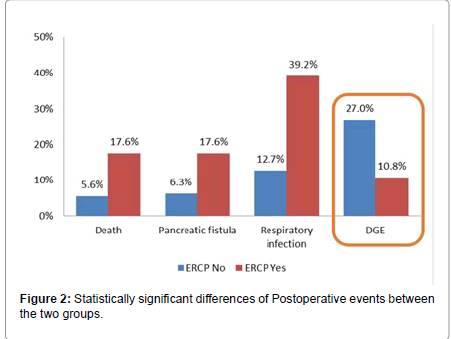 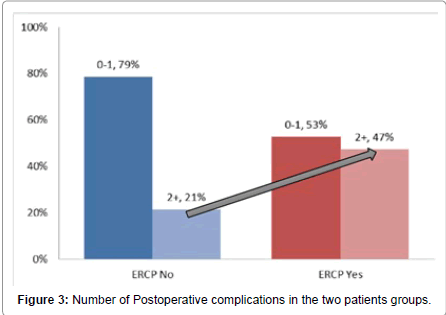 Figure 3: Number of Postoperative complications in the two patients groups.

Table 6: Univariate analysis–Number of Postoperative complication in relation with clinical parameter in the two groups (categorical).

In addition, to assess the impact of PBD on postoperative outcomes, logistic regression was conducted and odds ratio was calculated. Univariate analysis proved that patients from PBD group had 3,29 (95% Cl 1.77-6.19; p-value <0.001) times increased odds of having 2 or more postoperative complications compared to the rest of patients (Table 7). To control for baseline differences in the two groups of patients and to further support the univariate effect, multivariate logistic regression run, resulting to the same direction. Thus, upon adjustment with baseline characteristics, PBD-Patients had 4,36 (95% Cl 2.14-9.22; p-value <0.001) times higher odds of having more than one complication postoperatively compared to the other patients group (Table 8).

Several retrospective studies and prospective randomized trail have failed to demonstrate the benefit of PBD on postoperative outcomes after pancreaticoduodenectomy in jaundiced patients with pancreatic head cancer [3-6,13-20]. However some meta-analysis and reviews have shown that this strategy was associated with higher rate of postoperative complications [12,13,19-23]. To access these conflicting opinions, the aim of our study is focused on whether PBD should be performed routinely or selectively in jaundiced patients suffering from pancreatic head cáncer [6,16,19,20,22-24,25-28].

We found that patients from PBD group have higher percentage of postoperative respiratory infection (9.09%) and ICU admission (63.64%), this means that PBD did not have a positive impact on postoperative outcomes. However, this procedure did not affect the occurrence of other postoperative events. These corroborate with some retrospective studies results performed by other authors since postoperative hospitalization length did not differ significantly between the two groups. In the same perspective Van de Gaag et al. and other similar studies, have compared PBD versus surgery alone in patients with pancreatic head cancer. The authors found that routine PBD increases the rate of preoperative and postoperative complications [29-35].

In four randomized studies that did not show a benefit of PBD, the mean duration of drainage was 7 to 18 days. However, a long period would be unlikely to yield better results and can increase the risk of stent occlusion and cholangitis, and would result in prolonged postponement of elective surgery for a potentially resectable tumor. Some authors have demonstrated that the risk of infectious complications, intra-abdominal abscess and death were increased with biliary drainage performed preoperatively in another multicenter randomized trial, it was shown that PBD resulted in 2-fold increased rate of serious complications versus patients of surgery alone group [36-42]. However, no significant differences were found in surgery associated complications [43,44], length of hospital stay or mortality. Strom et al. presented the results of their retrospective study regarding the role of PBD in patients with resectable pancreatic head cáncer [45-53]. They conclude that PBD not only has no favorable effect on survival, but percutaneous transhepatic biliary drainage was found to be an independent prognostic factor associated with worse overall survival [54-59]. The authors acknowledged that the observed results regarding percutaneous trans-hepatic biliary drainage are likely attributed to multiple factors including more advanced disease stage, delayed surgical intervention, increased number of preoperative biliary procedures and increased rate of hepatic metastasis. It is evident that ERCP performed for therapeutic or diagnostic purposes is associated with a risk of different complications: bleeding, intestinal perforation, cholangitis, acute pancreatitis, cardiopulmonary event, miscellaneous [60-62].

These complications risks can be related either to the patient factors or to the endoscopist skill. Thus, it is imperative to assess ERCP related complications risk factors before shifting the patient to this endoscopic procedure to prevent the occurrence of the sus-mentioned side-effects, by taking in account comorbidities [63]. The American Association of Gastrointestinal Endoscopy guideline stratifies patients according to the procedure, and defines biliary sphincterotomy as a high-risk procedure for bleeding, and ERCP without sphincterotomy as low risk procedure for bleeding. Many studies have proposed diverse ways of preventing these complications related to ERCP, the best one seems to be the consideration of patients comorbidity and the improvement of endoscopist skill [6,16,19,20,22-24,25-28]. In our collected data from patients files, there was no mention of preoperative ERCP related complications [64]. In near future, We will do a similar study with prospective data on patients shifted to ERCP for different indications to focus immediate and long term post-procedure complications.

Based on our results, we agree that PBD predispose to intraoperative and postoperative complications occurrence, therefore, We suggest that this strategy can be applied selectively in jaundiced patients with pancreatic head cancer presenting with cholangitis or fever, severe pruritus, or in patients for whom surgery is expected to be delayed because of some inoperability conditions (cardio- respiratory comorbidities), or in those patients in whom neo-adjuvant therapy is considered .PBD can also be reserved for palliative alternative in case of unrespectable diseases. To solve this controversial preoccupation, we will do a prospective study with a large sample in the future.

Copyright: © 2017 Tshijanu F, et al. This is an open-access article distributed under the terms of the Creative Commons Attribution License, which permits unrestricted use, distribution, and reproduction in any medium, provided the original author and source are credited.
Top