The Polycyclic Aromatic Hydrocarbons (PAHs) are the most widespread organic environmental pollutants. PAHs are found in motor vehicle exhaust. Some PAHs are found in medicines, dyes, plastics, pesticide, naphthalene balls and wood preservatives. The compounds under the presences of Sun light generally activated and inhibited the cell growth. Hence the present investigation was focused on the maintenances and culturing of NIH-3T3 and L-929 cell lines derived from mouse fibroblast as well as the phototoxicity assessment of PAHs compounds (Anthracene and Benzanthrone) in these cell lines. Monolayer culture of cell lines was grown in DMEM culture medium. Live cells were attached in cryovial check surface and dead cell was mixed in the medium and rise up on the upper layer on the medium. The result showed that the singlet oxygen (1O2) generation by benzanthrone (5-50 ppm) and Anthracene (20-50 ppm) showed the phototoxicity under the exposure of UV-A (5.76 J/cm2), UV-B (2.16 J/cm2) and sunlight 60 min. Rose Bengal (50 ppm) was used as the positive control. Benzanthrone generated the more amount of singlet oxygen as compared to Anthracene while Benzanthrone generated more superoxide as compared to Anthracene.

Phototoxicity is a form of photosensitivity that is not depended on an immunologic response. Phototoxic reaction are dose dependent and will occur in almost anyone who takes or applies an adequate amount of the offending agent and UVR, but the dose necessary to induce such reaction varies among individuals. Phototoxicity causes sunburn, blisters, and other skin problems. Photoreactive agents or photosensitizers are chemicals that induce a photoreaction. The chemicals may be therapeutic, cosmetic, industrial, or agricultural (Fitzpatrick and Johnson). Photosensitivity reactions can be caused by injected, oral, or topically applied chemical photosensitizers. Photosensitivity reactions can occur in exposure to both UVA and UVB, but are more likely to occur in the UVA range [1]. PAH can be thought of as marker molecules as their abundance can be directly proportional to combustion processes in the region and therefore directly related to air quality.

Benzanthrone (BZA) is an aromatic hydrocarbon derivate used as a dyestuff intermediate for anthraquinone-based dyes. It has the appearance of a light yellow to brown-green powder with melting point of 170°C. It is insoluble in water and soluble in alcohol. It is a basic substance with fluorescent and luminescent properties. It can be used for photosensitization, and as a charge transport material. It is reported to cause itching and burning sensation on exposed skin, together with erythema, dermatitis, and skin pigmentation. Benzanthrone is reported to cause an itching and burning sensation, erythema, dermatitis, and skin pigmentation [2-4]. In sensitive individuals, actinic dermatitis or leukoderma can develop because of a photodynamic effect [3,4]. Itching, precocious generalized eczema, pigmentation, and photosensitization have been observed in workers exposed to Benzanthrone. Systemic effects result from liver damage [5] nervous-system damage [6] and disturbance of the autonomic-nervous-system regulatory function [5]. More recent studies indicate that Benzanthrone, upon exposure to light, can generate active oxygen species that might be responsible for the photocontact dermatitis caused by Benzanthrone in industrial workers exposed to this chemical [7]. Because of the toxic nature of Benzanthrone, the U.S. Army Environmental Health Agency advised substituting Benzanthrone with a less toxic chemical in smoke mixtures.

Anthracene is a solid polycyclic aromatic hydrocarbon consisting of three fused benzene rings. It is a component of coal-tar. Anthracene is used in the production of the red dye alizarin and other dyes. Anthracene is colorless but exhibits a blue fluorescence under ultraviolet light. Commercial anthracene is obtained from coal tar, common impurities being phenanthrene and carbazole. Anthracene photodimerizes by the action of UV light. The dimer is connected by a pair of new carbon-carbon bonds. The dimer reverts to anthracene thermally or with UV irradiation. The reversible dimerization and the photochromic properties of anthracenes are the basis of potential applications. Substituted anthracene derivatives behave similarly. The reaction is affected by the presence of oxygen.

Anthracene is converted mainly to anthroquinone, a precursor to dyes. Anthracene is an organic semiconductor. It is used as a scintillator for detectors of high energy photons, electrons and alpha particles. Plastics, such as polyvinyltoluene, can be doped with anthracene to produce a plastic scintillator that is approximately water-equivalent for use in radiation therapy dosimetry. It is also used in wood preservatives, insecticides, and coating materials.

The generation of singlet oxygen by UVR/sunlight exposed or unexposed PAH under aerobic condition was measured in aqueous solution. A 10ml assay mixture containing RNO (0.35x10M-5s to 0.4x10M) and L-histidine (10M) in 0.01M phosphate buffer (pH 7.4) in each petridish was exposed under similar set of experimental conditions for comparison. The production of singlet oxygen was measured spectrophotometrically by recording the bleaching of RNO at 440nm. The production of singlet oxygen was confirmed by an addition of specific quenchers of singlet (NaN3/DABCO) in the reaction mixture. The concentration of PAH was 5 - 50ppm and 20 - 50ppm and dose level of the exposures were as follows: UVA irradiation-1.4mw/cm, UVB 0.4mW/cm and sunlight for 1hrs.

The formation of superoxide radical was assessed by monitoring the photosensitized reduction of NBT. The reduction of NBT by superoxide leads to formation of a blue colored NBF (Nitro-blue diformazoan). A 10ml assay mixture-containing NBT (1.67x10M) in 0.01M carbonate buffer (pH10) and a PAH was irradiated for 0 to 20 min under UVA, UVB or sunlight. The production of NBF was monitored by recording an increase in the absorbance spectrophotometrically at 560nm. The generation of superoxide was further confirmed by an administration of SOD (25 Units/ml) in a reaction system as a selective quencher. The concentration of a PAH was 5 - 50ppm and 20 - 50ppm and exposure doses of UVA, UVB and sunlight exposure were 1.4mW/cm, 0.4mW/ cm and 0 to 20 min respectively.

The 10 ppm solutions of each compound prepared in DMSO were taken for the photodegradation study. The 10 ml solution of each compound was taken in 60 x 15 mm glass petridish and irradiated synergistically under UVA (1.4 mW/cm2) and UVB (0.4 mW/cm2) for different time intervals (30, 60, 90, 120, 150 and 180 min). After exposure the sample was transferred in graduated test tubes and loss of volume due to evaporation was make up by DMSO and absorption spectrum of was taken between 200-700 nm by Cintra 40 spectrophotometer.

E. coli (DH5α): E. coli is one of the main species of bacteria living in the lower intestines of mammals, known as gut flora. When located in the large intestine, it actually assists with waste processing, vitamin K production, and food absorption.

Survibility: Effect of UV-A radiation (1.4mw/cm2) on growth of E.coli: UV-A exposure to E.coli for 0-2 hours did not produce any significant change in cfu of E.coli. On the other hand, exposure upto 3 hour produced significant reduction in the E.coli.

Effect of UV-B radiation (0.4mW/cm2) on growth of E.coli: UV-B exposure to E.coli for 0-1 hour did not produce any significant change in cfu of E.coli. On the other hand, no growth was observed on 90 min. of exposure.

The singlet oxygen (1O2) generation by Anthracene showed the phototoxicity at various concentration from 5–50ppm under the exposure of (Table 1a) under the exposure of UV-A (5.76 J/cm2), UV-B (2.16 J/cm2) and Sunlight (60 min.). Rose Bengal (50 ppm) was used as the positive control. Anthracene showed a concentration dependent 1O2 generation as compared to UV-B (2.16 J/cm2) and Sunlight. Anthracene generates more amount of singlet oxygen as compared to benzenthrone. The order of Singlet oxygen generation 50ppm was observed in the following order: UV-A > Sunlight > UV-B (Figure 1). 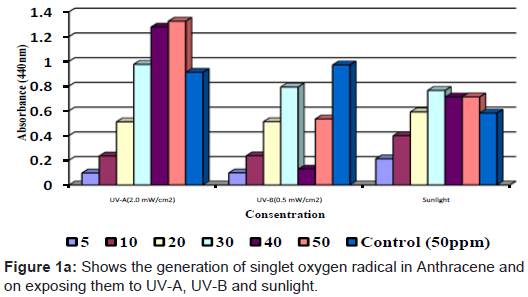 Figure 1A: Shows the generation of singlet oxygen radical in Anthracene and on exposing them to UV-A, UV-B and sunlight. 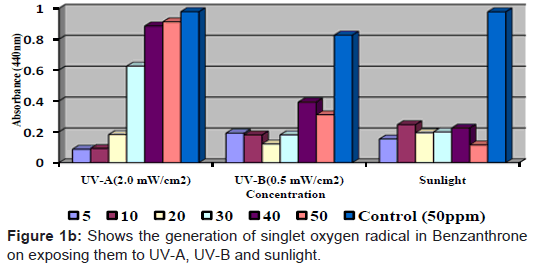 Figure 1B: Shows the generation of singlet oxygen radical in Benzanthrone on exposing them to UV-A, UV-B and sunlight.

Table 1a: Generation of singlet oxygen in Anthracene on exposing in UV-A, UV-B, and Sunlight for 1hr.

The singlet oxygen (1O2) generation by Benzenthrone showed at different concentration from 5 to 50 ppm (Table 1b) under the exposure of UV-A (5.76 J/cm2), UV-B (2.16 J/cm2) and Sunlight (60 min.). UV-A exposure generates more singlet oxygen than that of UVB. Rose Bengal 50 ppm was used as a positive control. Benzenthrone is more light sensitive as compared to Anthracene. The order of Singlet oxygen generation was UV-A>UV-B>Sunlight (Figure 1).

Table 1b: Generation of singlet oxygen in Benzenthrone on exposing in UV-A, UV-B, and Sunlight for 1hr. 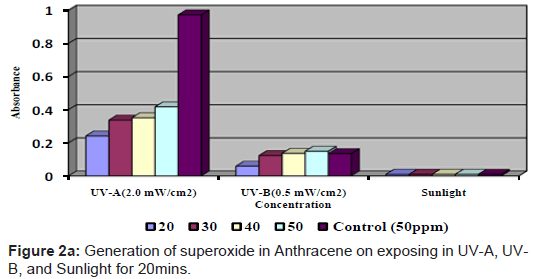 Figure 2A: Generation of superoxide in Anthracene on exposing in UV-A, UVB, and Sunlight for 20mins. 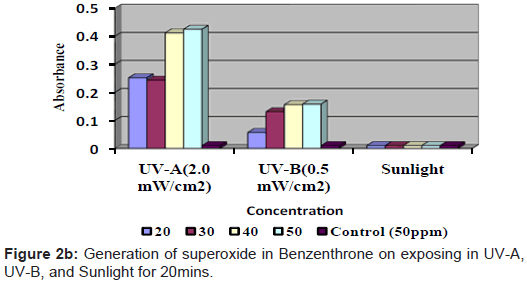 Figure 2B: Generation of superoxide in Benzenthrone on exposing in UV-A, UV-B, and Sunlight for 20mins.

Table 2a: Generation of superoxide in Anthracene on exposing in UV-A, UV-B, and Sunlight for 20mins.

The superoxide was generated O- 2 by benzenthrone under UV-A (5.76 J/cm2) and UV-B (2.16 J/cm2) exposure at different concentration from 5 ppm to 50 ppm (Table 2b) of benzenthrone were used for superoxide generation. There was no generation of O-2 in dark in same concentration. Under exposure of UV-A and UV-B crystal was found in the presence of riboflavin. The higher yield of superoxide was observed under UV-A as compared to UV-B (Figure 2).

Table 2b: Generation of superoxide in Benzenthrone on exposing in UV-A, UVB, and Sunlight for 20mins. 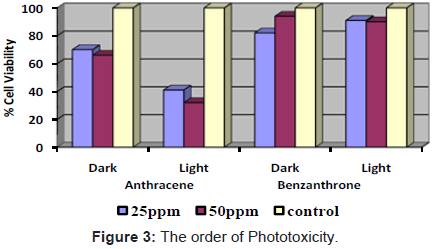 Figure 3: The order of Phototoxicity.

After incubation period, the growth of bacterial colonies on plate was counted 83*104.

The effect of UV- A and UV- B radiation exposure on E.coli growth is shown in table 3 and table 4.

Table 5: Inhibition zone at different concentration of Rose Bengal on E.coli on exposing to UV-A, UV-B and sunlight.

Table 6: Inhibition zone at different concentration of Anthracene on exposing to UV-A, UV-B and sunlight.

Table 7: Inhibition zone at different concentration of Benzanthrone on exposing to UV-A, UV-B and sunlight.

PAH’s may be toxic to human beings and their toxicity may increase further under exposure to UVR/sunlight. We observed that photoexcited Anthracene and Benzanthrone produced significant amount of singlet oxygen (1O2) and significant amount of superoxide anion radical (O2 .-) at the levels of their usage. The generation of reactive oxygen species (ROS) by these PAH was dependent upon the exposure periods under ambient intensities of UVA, UVB and solar radiation. The formation of the ROS was confirmed by using sodium azide [8] as specific quenchers of 1O2 and SOD for O2 .- respectively. It is well known that ROS produced by various compounds under the influence of ultraviolet/visible radiation, are responsible to alter the normal function of cellular constituents and skin photosensitization causing erythema or edema [9], tumor promotion [10], mutagenic and carcinogenic effects [11]. Moreover, some Furocoumarins used for the treatment of psoriasis and other skin diseases, are producing 1O2 and O2 .- under UVA exposure and are known to produce skin photosensitization reactions leading to carcinogenesis [12]. Riboflavin, a known nutritional factor of physiological importance, generated ROS and produced haemolysis to human erythrocytes in vitro under exposure to sunlight [13].

Thus the production of ROS by UV-A, UV-B and sunlight exposed PAH suggested that the photoexcited PAH may impose adverse effect to human health. Phototoxicity caused by illuminated PAH may be further induced in many folds by an increase of UV radiation in sunlight due to depletion of ozone layer (Fredevick, 1993). Therefore an exposure to UVR/sunlight should be avoided after intake of Anthracene and Benzanthrone. On the basis of earlier studies it was found that UVR and sunlight exposure for 60 min. at different intensities did not affect cell viability. Further exposure for higher time periods, the cell viability was decreased. Therefore Phototoxicity of different PAH was studied at the ambient level of UV-A (1.4mW /cm2), UV-B (0.4mW/cm2) and sunlight (1.4x105 Lux) exposure.

Copyright: © 2012 Tobit V, et al. This is an open-access article distributed under the terms of the Creative Commons Attribution License, which permits unrestricted use, distribution, and reproduction in any medium, provided the original author and source are credited.
Top