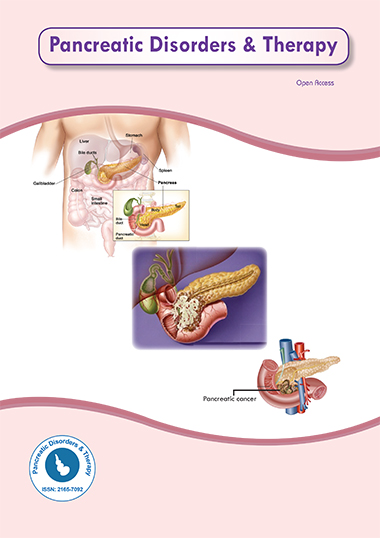 Results: Mild (F1 or F2) and severe (F3 or F4) fibrosis was revealed by TE in 15 and 6 patients (38.2%), respectively. However, the levels of the liver enzymes were elevated in only 12 patients. The APRI and FIB-4 scores jointly revealed fibrosis of the liver in two patient. ACP patients with liver fibrosis drank significantly more amount of alcohol and had diabetes more frequently than ACP patients without liver fibrosis.

Conclusion: Liver fibrosis was revealed by TE in one-fourth of the ACP patients. Liver enzymes are not reliable parameters with which to diagnose liver fibrosis. The quantity of consumed alcohol and the presence of DM are risk factors for the development of liver fibrosis in ACP.

Although chronic ethanol consumption is a common etiological factor, the coincidence of chronic pancreatitis (CP) and liver cirrhosis in alcoholic patients is relatively rare [1,2]. Different morphological and functional examinations have revealed the presence of alcoholic liver fibrosis (ALF) in only 10-20% of alcoholic CP (ACP) patients [3-6]. The rare coincidence of clinical and morphological alterations in ALF and ACP, and an inverse correlation between the indices of the pancreatic and liver functions evaluated by the fecal elastase-1 test and the indocyanine green test have been described [7]. These results support the hypothesis of the independent pathogenesis of ALF and ACP and suggest the presence of another etiological factor such as a genetic predisposition [8].

It may be assumed that the sociobehavioral factors of ACP and ALF also differ. ACP has been found to be more common in patients who smoke, have a long-term history of alcohol consumption, and prefer to drink spirits, and have a relatively low level of education [9], whereas ALF was reported to be more frequent in smokers [1]. The duration of chronic alcohol abuse proved to be shorter in ACP than in ALF, and cirrhosis was more characteristic among older subjects [3,10]. According to Gullo et al. the duration of alcohol consumption was significantly longer in ACP patients with ALF than in ACP patients without ALF [11].

Although liver biopsy is currently the gold standard for the diagnosis of liver cirrhosis, it has many drawbacks, such as the sampling error, the cost, and the risk of complications [12-14]. Noninvasive markers are increasingly used for the assessment of liver fibrosis, such as serum biomarkers and transient elastography (TE). TE was originally developed to measure the stage of liver fibrosis by assessing the stiffness of the liver in a noninvasive manner through the use of ultrasonography in cases of chronic hepatitis C infection [15-19]. TE has been demonstrated to be a suitable method to reveal the severity of liver fibrosis in CP and concomitant cholestasis through measurement of the liver stiffness [6]. It is also useful to predict outcome in portal hypertension, variceal bleeding, hepatocellular carcinoma and postoperative patients [20-22].

The aim of the present study was to assess the liver fibrosis in patients with CP by measuring noninvasive fibrosis scores and liver stiffness by means of TE.

Patients with ACP were enrolled in the study and volunteers were recruited to serve as controls. CP was diagnosed on the basis of morphological diagnostic criteria [23,24]. Abdominal ultrasonography (US) and computed tomography (CT) were performed in all patients. Magnetic resonance cholangiopancreatography (MRCP) and/or endoscopic ultrasound was performed when CT was equivocal. Fecal elastase-1 test was performed to diagnose exocrine pancreatic function in some patients. Patients with cystic fibrosis and other etiologies of CP, cholestasis and viral, metabolic and autoimmune liver diseases were excluded from the study.

TE was performed with a Fibroscan 402 (Echosens, Paris, France) device. Measurements were made from one to three measuring points; the success rate was 78-100% with an average of 21 (10-42) valid shots per patient, expressed in kilopascals (kPa). The European Association for the Study of Liver (EASL) Clinical Practice Guideline was used to evaluate the measured values [27]. Fibrosis was staged by the Metavir scoring system [28-31] and TE results were compared with the noninvasive fibrosis scoring parameters.

All participants provided their written informed consent. The study protocol was in full accordance with the most recent revisions of the Helsinki Declaration and was approved by the ethics committee at the University of Szeged. SPSS 22.0 (Armonk, New York, USA) was used for the two samples t-test and chi-square test. P<0.05 was considered statistically significant.

TE is a diagnostic modality that can assess the extent of liver fibrosis. The method has been evaluated extensively in patients with chronic hepatitis C infection [15-19]. It was recently demonstrated, that the degree of liver stiffness measured by TE in CP patients with concomitant cholestasis was correlated with the histologically indicated stage of liver fibrosis [6].

The aim of the current prospective study was to assess the occurrence of liver fibrosis in patients with CP by measuring noninvasive fibrosis scores and liver stiffness with TE. CP patients, diagnosed by imaging modalities, such as CT, MRCP, EUS were enrolled. CT has a good accuracy revealing the characteristic morphological alterations (calcification, pancreatic duct dilatation, pancreatic atrophy) in our patients with advanced CP.

The etiology of the pancreatitis was alcohol abuse in all patients. Among the noninvasive fibrosis scores, the levels of liver enzymes were elevated in 12 patients and the APRI and FIB-4 score were both normal except in six case. However, TE identified liver fibrosis in 21 (38.2%) of the ACP patients. These results suggest that the levels of the liver enzymes and the noninvasive fibrosis scores are not reliable parameters with which to reveal liver fibrosis in ACP. The effectiveness of the use of these noninvasive scores was earlier demonstrated to be lower than that of TE in diagnosing liver cirrhosis [6]. Furthermore, liver fibrosis in ACP patients was diagnosed by TE more frequently in our study than published earlier. This could be explained that patients in our study had long standing, advanced ACP with calcification, endocrine insufficiency and pancreatic surgery.

The two major causes of chronic liver disease in patients with ACP are alcohol abuse and/or compression of the biliary duct [1,3,9-11,36]. Cholestasis due to the fibrous pancreatic head was an exclusion criterion in our study, and therefore only the toxic etiology of the liver injury was assessed.

The drawbacks of our study include the low number of recruited patients and the fact that liver fibrosis indicated by TE was not always confirmed by histological examination. Liver biopsy is regarded as the gold standard for the assessment of the presence of liver fibrosis, but this technique is associated with a significant rate of complications [37].

The use of TE may be of particular interest in ACP patients because an abnormal finding is strongly suggestive of a fibrogenic process of the liver. The early detection of ALF may influence the prognosis of the disease.

We have no commercial associations that might be a conflict of interest in relation to the submitted manuscript.

Copyright: © 2017 Zsóri G, et al. This is an open-access article distributed under the terms of the Creative Commons Attribution License, which permits unrestricted use, distribution, and reproduction in any medium, provided the original author and source are credited.
Top